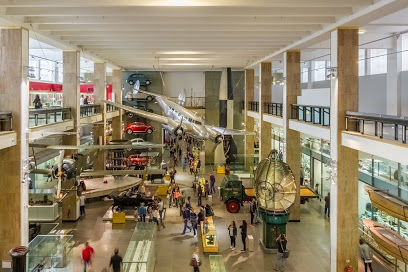 It was over afternoon tea at the Royal Lancaster London that I was able to put pen to virtual paper to record what was a long and pleasant morning at one of London's famous museums, the Science museum. I think if you have small children that like to push buttons and pull levers, the Science museum is one of the best places to do this. The Science Museum is located at the centre of South Kensington, in London so it was short and pleasant walk across Hyde Park that I was able to enjoy to arrive at the hotel for my respite!

The museum was founded in 1857, and it's recognised as one of the largest tourist attractions in London, attracting 3.3 million visitors every year. It's home to more than 300,000 items relating to public health medicine and science and there's always fascinating events and exhibitions taking place, so it is well worth a visit for friends and family during their trip to London.

In 1857, a museum was founded known as South Kensington Museum (now called the V&A or Victoria and Albert Museum). The museum had a collection of historical and contemporary machinery. Eventually, the science collections were moved to their current location on Exhibition Road, hence the Science Museum came into existence.

Today, the medical collections of the Science Museum are regarded to be of global significance, with strengths including public health, biosciences and clinical medicine. The Wellcome Wing is mainly dedicated to bioscience, which makes it a leading centre in the world for contemporary science presentation to the public.

A visit to the museum gives visitors a chance of exploring some of the most amazing objects known to have shaped the world that we live in today; they include the following:

In 1991, Sharman, a British chemist, became the first woman and the first British astronaut to visit Mir space station. A trip to the Science museum gives you a chance of seeing the suit that she was wearing on her mission. Sharman's suit is made of nylon with Teflon coating fabric plus a separate rubberised fabric part forming an airtight lining. Visitors should make sure they notice the badges sewn onto the suit, which includes the British flag.

The clock is an astronomical clock known to be among the world's oldest clocks and is an important British medieval artefact. It's hailed to be one of the oldest plus most cherished exhibits in this museum. It's one of the groups of the famous fourteenth to sixteenth-century astronomical clocks found in West of England. Also, the surviving mechanism dates to between 1386-1392 and was replaced in the nineteenth century. Eventually, it was relocated to the Science Museum, London, where the clock continues to operate. It chimes every 25 minutes and strikes every hour.

Exhibitions at the Science Museum

Get to explore the tropical house of the museum and walk amongst hundreds of thousands of free-flying moths and butterflies from various destinations from all over the world. Creatures from as far as South America, Africa as well as Asia are kept in the museum.

Visitors can follow the journey of these creatures from caterpillars to butterflies and enjoy one of the most incredible transformations in nature. Visitors can also talk to butterfly experts plus enjoy exhibitions and interactive games. The butterfly house is always open from April to September.

For those planning on visiting London, there are so many thrilling objects to see and sensational exhibitions at the Science Museum situated in London, and they are all within reach of hotels near the Science Museum.