THE FORGOTTEN FORT OF AJAIGARH , PANNA 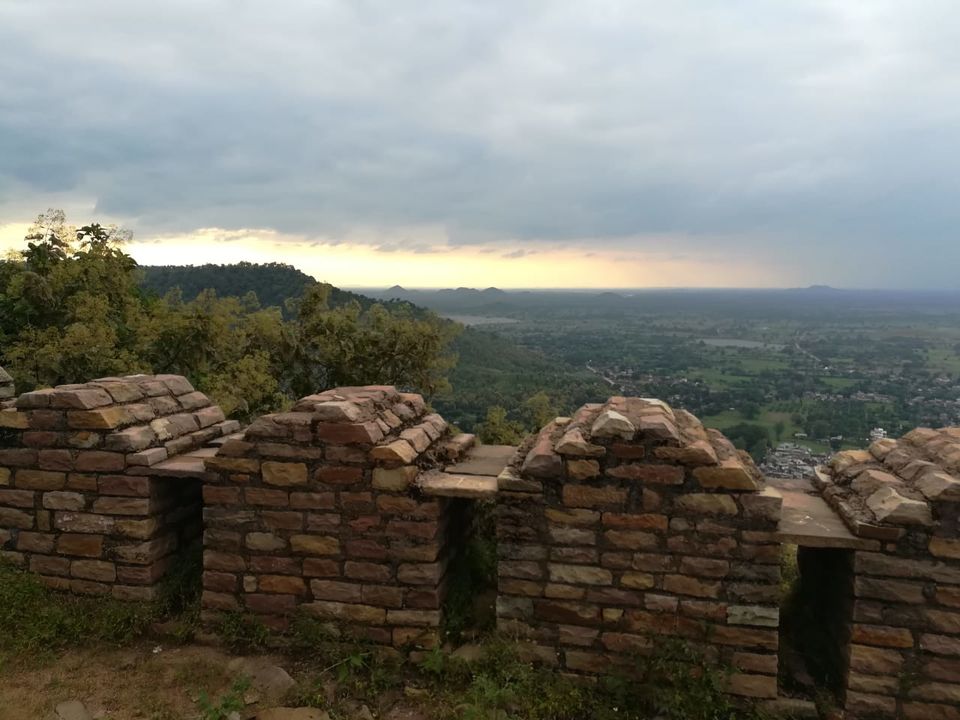 Forts never lose their strength and are standing tall past centuries on this planet, India has a number of forts which are major tourist attractions of the country but there are a number of them which are forgotten and not known to the mass ,one such fort lies in one of the princely state of British rule, AJAIGARH FORT, which lies around 20 kms from Panna, Madhya Pradesh.

It was 21st of September 2018 and I had to go to Panna for my first heritage walk as a leader, I checked out the trains available but to my surprise I got to know that Panna is not connected through railways so the nearest station around Panna and Ajaigarh is Khajuraho .The train Khajuraho Express(19666) runs daily , me and some of my friends who were to be the part of the part of the walk accompanied me so we left our college around 12:30 noon and reached the Gwalior junction railway station in 15 minutes, we got our general tickets for the same train costing 120 bucks each and and boarded the train around 2:30 pm as it was delayed for about an hour, it was a very fun and happy journey for all the girls , the ticket checker too was cordial and provided us seats so we had a gala time eating singing making merry all through the way. We reached Khajuraho railway station around 8:30 pm and took the government authorized autowala where we paid 150INR for reaching upto our hotel at city centre.

We reached our hotel where we had prior talk, Gupta hotel which costed us 650 INR (bargaining is always win win!!), the hotel was safe and descent for one night stay. And yes the Vayu’s Café nearby is pretty good eatery we had dosa costing 90 bucks each.

Around 6 in the morning it was time for us to check out of the hotel and proceed towards railway station for which we took an auto , from Khajuraho to Panna there are local buses which run daily covering the distance of 45 kms approx. charging 60 INR each, we reached Panna around 8:30 am through the uneven terrain . All through the journey I saw the beautiful hill ranges stretching over miles and the famous Panna National Park .Our girl gang again boarded a local bus for the town of Ajaigarh which is 20kms away from Panna we reached there in an hour .It was time to begin the steep steps of Ajaigarh fort all my walk participants and my friends accompanied me all through the way , there was a young group of cadet boys who were way too active and happy to see us all.

Ajaigarh was the princely state with the same name during British Raj in India , founded in 1765 by Guman Singh nephew of Raja Pahar Singh of Jaitpur , AJAIGARH FORT OR AJAYPAL FORT stands on the lofty Vindhyan hills , with only two gates open which were five earlier. The fort is representation of the Indo Islamic Architecture which is blended with beautiful Rajputana elements.

Climbing up 600 steep steps in total we reached the entrance of the fort , it was pretty much a challenge.Though the fort comes under the protection of ASI but no maintenance and care is taken at all.The main gate of the fort seemed to be entact but in a poor condition moving inside we saw an old canon , the view from the top of the fort was serene and calm.We moved ahead and and went upto to see the two rock cut tanks exclusively named as GANGA AND YAMUNA respectively where water is stored , this was done as the area suffered from famines and malaria time to time.I told the group about the importance of rock cut tanks ,they were made to save water which was used in time of scarcity.Climbing up a few uneven steps we came across a monolithic rock cut sculpture of Tantric Ganesha( whose tusk faces right side ;with a padma ie lotus in one hand and parashu ie axe in other ;portrayed as drinking liquor and a snake can be noticed also). Moving on the uneven area the elements inside the fort are scattered at distances. The group that I was leading was very informative as well they were willing to learn and question time to time, which made me very happy.Exploring the area further we reached to the ‘Ajaypal Talab’ , the name again comes from one of the old stories relating to the tantric named Ajaypal who was called in order to get rid of the famines by the then king. The locals believe till date that if any disease is caught by their grazing animals going to the Ajaipal talab and praying in the temple associated with him shall cure the illness.they arrange small stones one on another and after their animals are cured they unarrange it.That is quite a belief .

One incident is worth mentioning , As in Nagara style of architecture the hindu temples are divided into a number of parts beginning from JAGATI(the base) to MANDAPA, GARABAGRIHA ,SHIKHARA ,AMALAKA ,URSHRINGA AND KALASHA (at the top) there are remains of a destroyed temple and the amalaka remains entact about which the local people believed as grinding machinery used by the people.Inside the fort there are some of the elements of Jainism also , like the tall statue of Neminath one of 24 tirthankara .

The area inside the fort is inhabitated by local people a few huts here and there who normally donot interact with outsiders.Near a tree ‘PANCHMUKHI SHIVLINGA’ lies which is worshipped by all.

POINTER- Panchmukhi shivlinga(linga+yoni) as the name suggests is five faced and rare. The Shivlinga is always divided into three parts ; THE BRAHMA BHAG (may or maynot be visible); THE VISHNU BHAG( the lower portion);THE SHIVA OR PUJA BHAG (which is visible and worshipped). Lower part of the linga is also termed as ‘bhadra’ . The top part of the linga is ‘ISHANA’, with other four as ‘AGHORA’ , ‘SADYOJATA’ , ‘TALPURUSHA’ , ‘VAMADEVA’.These represent different forms of lord shiva.

There is a lot of walking inside the fort and the whole group was hungry yet we covered the areas of the fort with full zeal, the next stop is another rock cut representation of KAMDHENU (the gau mentioned in hindu mythology), the different forms of Shakti like Maheshwari ,Parvati etc.Lat but not the least my favourite spot was the temples of Chandella era which are dismantled but yet look elegant (these temples are locally called by the name Rangmahal) these temples are made in the same pattern of architecture(Nagara style of architecture) with beautiful carvings , explaining the elements of this style was pretty challenging because there were no entact and exact parts but yet I managed to elaborate and guide them towards the beauty of Indian Architecture and Iconography (the credit for this goes always to my favourite teacher Rama Sir , who is always there for all the students).

Having done the tour Of whole of this place we all sat down , had some refreshment and some tea (ALL WERE CHAI PREMI).It was my first experience to interact with people on this scale and I was feeling quite overwhelmed to see how such a small area was just so enthusiastic and positive about life ,all they look for is an opportunity.This gave me a lot of positiveness too.Moving down the fort was equally challenging but I and my friends managed somehow .

It was evening time and we reached Panna with local teachers of the area via car, our dinner was hosted by my coordinator Shivaditya who has turned out to be really good friend, We all had the best of food in time(HOSTEL FOOD ATTROCITIES). Prior one of my friend Vanshika booked bus tickets for us which were straight from Panna to Gwalior costing 600 bucks each. We boarded the bus around 11:30 pm and reached Gwalior around 8:00 am in the morning.

POINTER: There are a number of temples in the Panna city one major is the PRANATH TEMPLE, Other attractions are Panna National Park and Raneh FALLS.

TIP: The area around and near Panna is not well connected via roadways , the roads are crooked and uneven please do take care of your safety .