A dip into the art world of National Gallery 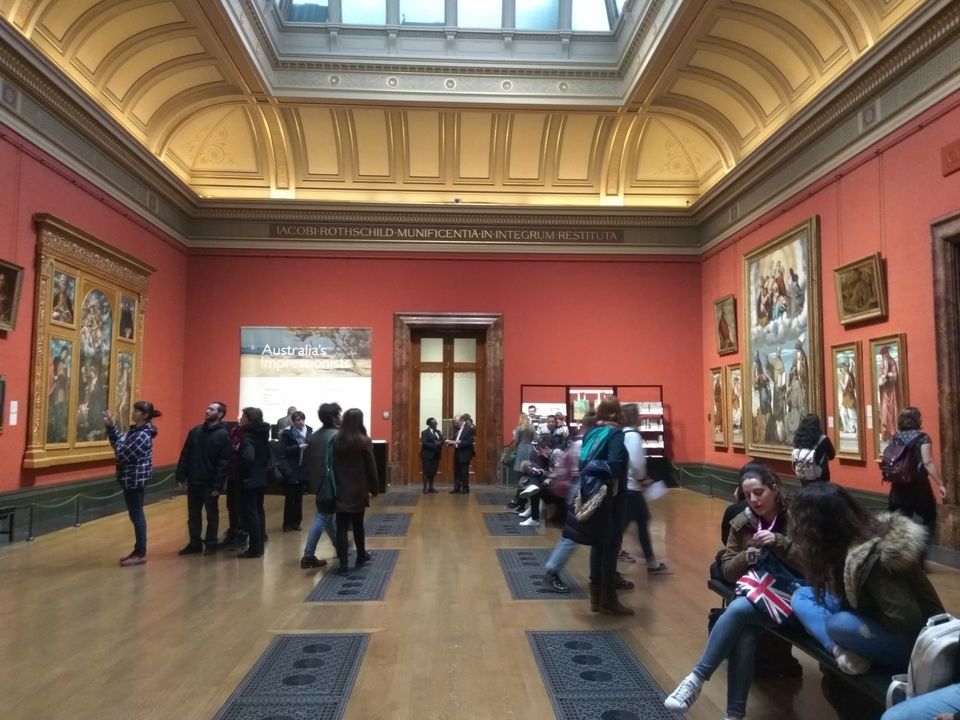 It’s necessary to take precaution mentally before visiting the art galleries.There are few important points to remember before planning a visit an art center. First,Let's be honest about this.Most of us do not belong to art background and we do not understand what art is?So there is no compulsion to see the famous pieces of work.Stick to the paintings which appeal to your eyes and mind.Second,no way one can see all the paintings of the gallery in one day But don’t be disappointed.If you can see ten percent also,it's worth a visit.And the last piece of advice,If you are really fascinated about the art,a bit of homework would be really useful.Just the overview and the structure of the art world.For everyone’s benefit I am trying to share a few details about the world of art here.

At one point of time European artists were forced to work on religious paintings and stories of Bible in Europe.Nothing else was recognized or encouraged as art.The strict regulations of Catholic church lead to catastrophe and death of all kinds of paintings and art movement.Even the legendary figure like Caravaggio was the victim of the same.He has painted the world famous still life like ‘The basket of fruits’ and then vanished from the still life paintings and forced to work on life of Jesus and catholic age.The religious paintings were respected on top,then come the landscapes and still life was not given any of the attention.Few countries were exceptional although.The Scandinavian artists were fond of painting landscapes,this might be because of spectacular views of Norway,Denmark and Sweden or the relatively less interference of catholic churches in these countries.You can always count the four out of five landscape paintings are by Scandinavian artists.On the other hand Netherlands was always over excited by the growing market of still life paintings.There was high demand of these artworks in Dutch market which encouraged a lot of dutch artists to incline with still life.The Flemish artworks were the cause of experimentation in the still life figures in the medieval times.In France,Italy,Britain artists were used to hide clues of their artistic mind even in the religious paintings.The use of reflections in the mirror and characters not directly connected to the theme.The detailed work of various type of fabrics were the hidden quality they have tried to express by their catholic artworks.After the Renaissance there was lot of experimentation came in all kinds of arts.

National Gallery is one of the most visited and recommended art galleries of all the time.I have personally experienced Londonist’s saying that this is lot better than Louvre in Paris.Tourists are generally overwhelmed by the size of Louvre because the collection was huge but the quality art is only a few.But National Gallery always bid for the most acclaimed and best pieces of artwork.So you can see the best here.Let’s not go into this eternal debate and come to the experience of my own.

There was no ticket for any galleries and museums in London.It’s so good.Often we can see students and kids from schools to come and see the historical figures and do activities.I have reached the NG near Trafalgar square ans started from the ground floor galleries.I started looking at landscapes of Scandinavian artists.Someone has advised me to start looking at three things in a painting.The use of light,the use of color and the theme.It was impossible to see each one of the painting with the 'three point rule' so I preferred to forget that instantly,looking at the collection size.There were so many of it.The self portraits,The distorted artwork,the Bible stories and the list goes on.

I did not take the guided trip or the video tutorials as I was on a budget.But I had my phone and National Gallery had a nice free Wi-Fi.So I became my own guide.Just look at the picture you like and check the name of the work and artist.Google it and everything you need to know will pop up before your eyes.What else do you need?

I had started my journey into the ocean of arts.And it was pleasant and painful at the same time.Please remember that it would be disturbing after two hours when you realize that you have covered only five percent of the collection.I skipped most of the the religious paintings and entered the great hall which had the work from Raphael,Michelangelo & Caravaggio.The ‘Sunflowers’ by Van Gogh is most viewed painting here and there is always a crowd standing in front of that.I took my time and explored as much as I could.There were

hundreds and hundreds of paintings.These were my personal favourites.

1) Susanna at her Bath

As far as I remember,I read about this picture in a book earlier. When Francesco Hayez painted this in 1850, he had already gained a reputation in romantic era.Born in a fisherman family,Francesco came to Milan in order to find his call of the artistic world.The painting here refers to a story from the Bible.Someone was looking at Susanna taking bath and she realized it.It would seem that her eyes will be following you wherever you stand.

There is so much controversy about this piece painted by Hans Holbein.Two men are standing opposite side of the larger than life figure but there are so many still life objects lying on the floor and the table.From the left hand side they look like something but from the right hand side they appear something else.People keep moving left and right in front of this painting.

Whistle jacket is actually a picture of a horse.Seeing as big a picture as this is mesmerizing.The horse seems so alive that no one can say that it is a imagination of the artist in the canvas. It is very rare to see the use of scale of this much realism.This three hundred year old horse created by George Stubbs is still capable of attracting our eyes.

4) Seaport with the Embarkation of Saint Ursula

St. Ursula was actually a British princess who went to Rome with many friends on a religious trip,but none of them survived while returning.Ursula can be seen in the boat with the flag.

5) An Experiment on a Bird in the Air

This was my best reward in the National Gallery. The picture of Joseph Wright is not less than a movie. Wright was a fan of Caravaggio. Every picture of Caravaggio has a source of light in it, but its position can not be understood.A scientific experiment is going on with a bird,which attempted to create vacuum.The Bird would die if the experiment would be successful,but not all the characters are paying attention.One child is covering the face in fear, another is looking in surprise. Some of them are in love.Although the scientist is very sensitive about this scientific experiment.