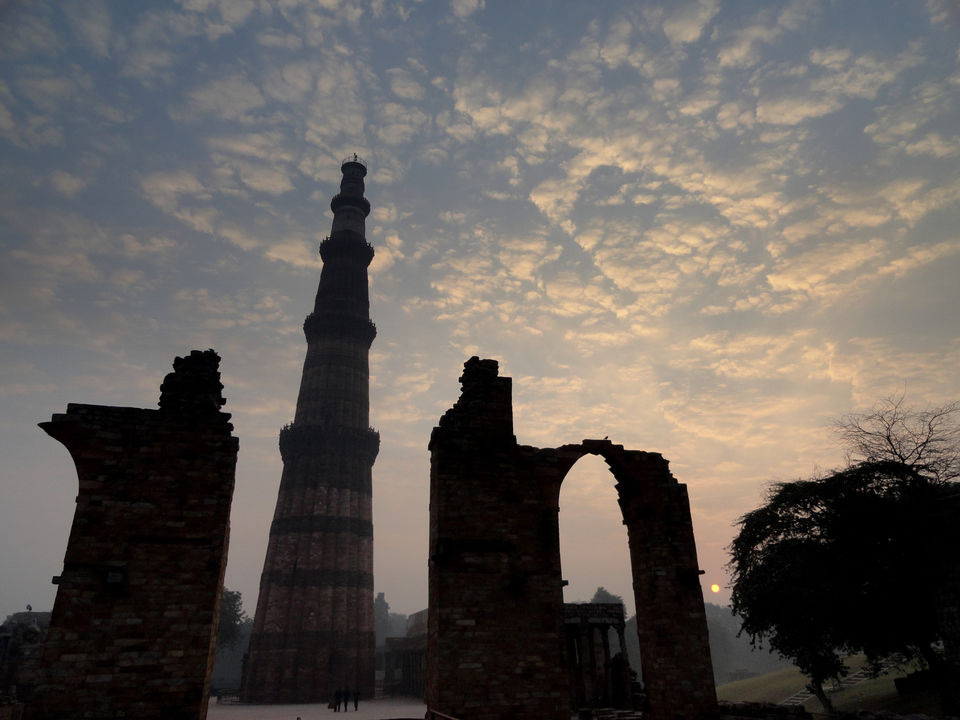 The visual symbol of the City of Delhi, one of the most visited tourist attractions stands at the core of an early fortified Delhi - Lal Khot. This place is seen them all the Gupta's, Tomar's, Rajput's, Chauhan's, Turks, Britisher's and now me....

Delhi became the capital of a substantial Kingdom and soon an empire under the Turks.

Qutub-uddin-Aibak started out as the slave and went on to be the General of Mohammed Ghori, the turk ruler who conquered India, but in time became the independent ruler of Ghori's Indian territories.

This complex has remnants dating from the 4th century. The pillars are mostly carved and on close inspection one can see many human, animal and divine figures. Such sculptures seem out of place within a mosque, since depiction of human or animal figures is unacceptable to orthodox islam as being akin to idolatry. The answer to this mystery lies in the fact that these reused materials from 27 Hindu and Jain temples that had stood in the vicinity and were mostly destroyed by the invading turks as an act of war.

The oldest structure in the complex is the Iron Pillar. It dates from the fourth century and was erected to commemorate the victories of Chandragupta II. The pillar is made of very pure cast iron and is remarkable from a metallurgical point of view. A popular tradition associated with the pillar is to be found in the Rajasthani epic, Prithviraj Raso. This story called the Kili Dhili Katha or 'the tale of the loose nail'. According to this story, the name of Delhi has its origins in the Dhili Kili or the loose nail.

The word 'Qutub' literally means the Pole star, around which the heavens revolve. At 72.5 m high, the Qutub Minar is definitely overdone as a mazhar. If the muezzin had the breath left after climbing up its top to give the Kazan or call to prayer, it would have been difficult to hear it. In olden days (about some decades back), people were allowed to climb up the staircase into the tower. However, owing to safety concerns, the Government has now banned the entry into the Minar.....there are some horror stories too about the tower, but that's left to your imagination.