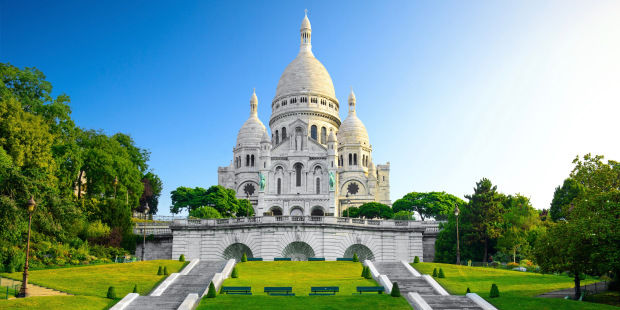 Are you planning a trip to Paris, France and looking for things to fill your itinerary? No trip to Paris is complete without a visit to Sacre-Coeur. Located in the Montmartre district, Sacre-Coeur sits at the top of the hill as the highest point in all of Paris. Sometimes known as the Basilica of the Sacred Heart, the Sacre-Coeur basilica was constructed in 1873 to pay tribute to the 58,000 lives lost during the Franco-Prussian War. It is home to a 19-ton bell, which is the largest of its kind in the world. 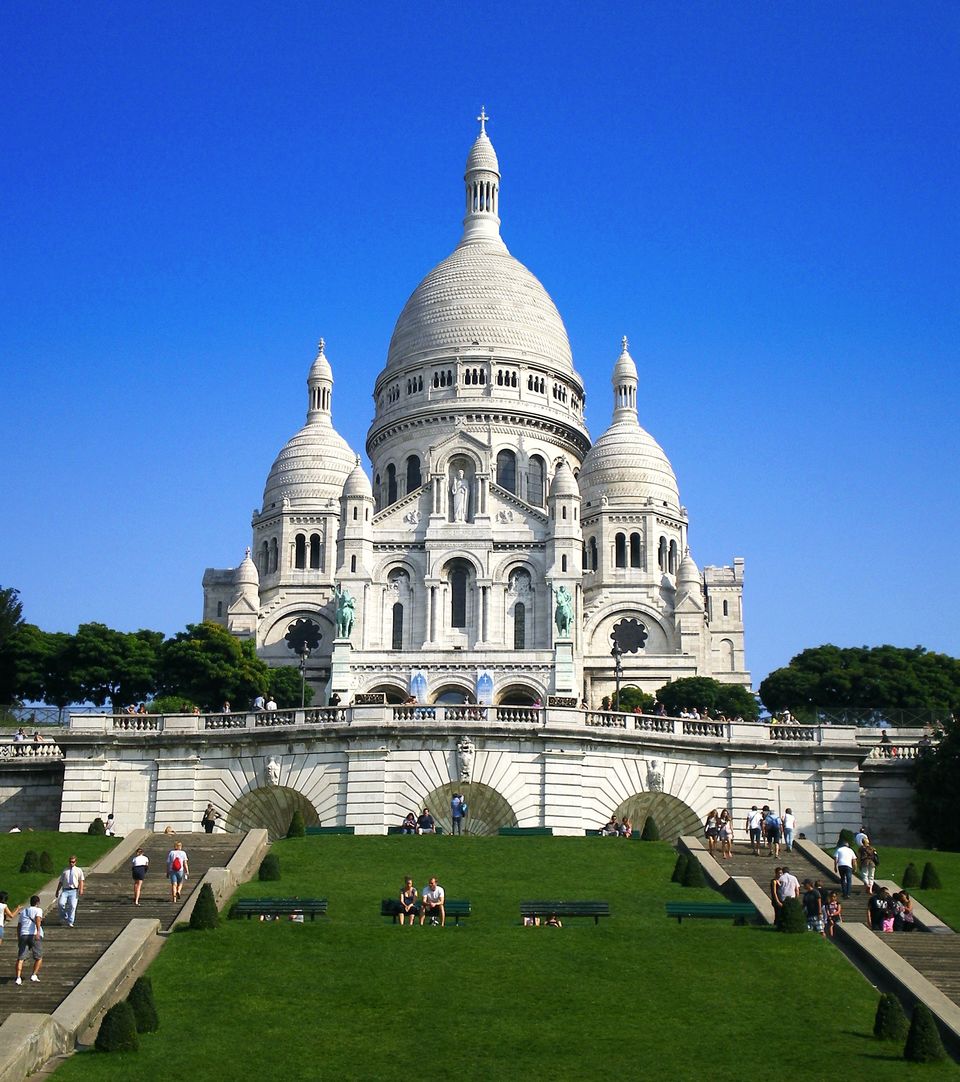 With easy Metro access, you can make this area of Paris your base for exploring the surrounding area as well as the city itself. Many reasonably priced hotels can be found near Sacre-Coeur in the 18th arrondissement.

French travertine stone gives the basilica its snow white color, which you can see from almost anywhere in Paris. This is what makes it one of the most prominent and noticeable landmarks in Paris. As you might imagine, one of the benefits of visiting Sacre-Coeur is the vantage point you have above the city when you ascend to the top of the dome. In fact, you can see all of Paris from the top of Sacre-Coeur.

The clock tower at the basilica is home to the world’s largest Savoyarde clock. The Luc-Olivier Merson designed apse mosaic, which depicts Christ in Majesty and The Sacred Heart worshiped by the Virgin Mary, Joan of Arc and St. Michael the Archangel, is also the largest of its kind in the world.

Inside the dimly lit Sacre-Coeur, you will find golden mosaics that match the bronze cat doors of the grand main portal. You can also view the bronze altar, the large choir, the 11 round and tall arches that create the barrel vault and the large dome. The crypt of this Catholic basilica is home to statues of saints as well as a relic, which is believed to be the very sacred heart of Christ.

Once you are done enjoying the interior architecture of Sacre-Coeur, you can head to the rear of the basilica. The grounds are home to a fountain and garden. Entrance to the garden and basilica are free, but there is a €5 admission fee to enter the dome and the crypt.

Get more info on fun things to do in Paris by Rick Steves. All of the guides by Rick Steves are some of my favorites when it comes to finding things to do that don’t cost a fortune. He also offers some walking tours that you can download to your phone. I have found these to be very enjoyable when checking out a new city – definitely better than paying for a local tour guide who may have an accent that is hard to understand. Plus, you typically have to tip those local tour guides, so these audio tours are awesome for travelers like me who are on a bit of a budget.