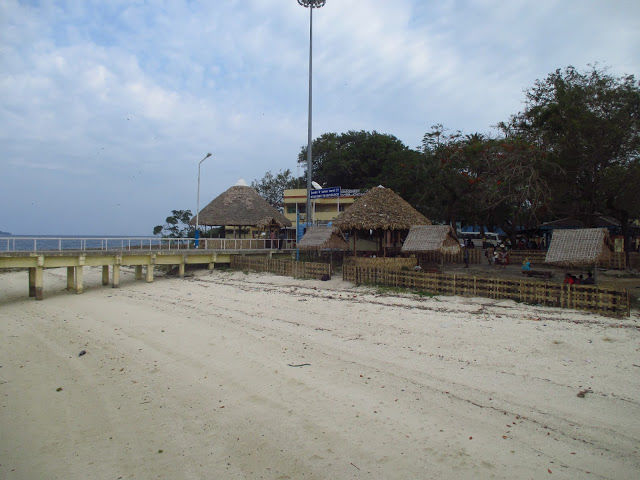 There was a little time left in the boarding board at the Port Blair, then thought here and there, take a few more memories of Havelock and accompany some snacks, along with some snacks for the baby. Biscuits, some chips and some Also keep small tiny frutti bins, which can be used for further travel. At this time our rooftop area was just around Jetty, then there was a crowd of people returning to Port Blair. There was a bus station nearby and some sloping seats were built in the nearby park, where there was nothing else to sit in and could have been saved from the least sunny sunshine here. There is also a temple of a roaming temple went. Turning around again we came back to Jetty because now the boarding time was also done. He also took a photo of Jaiti, which was not visible to anyone who was coming to see -

Bus to go to Radhanagar beach

After sitting in the ferry from the jetty half an hour we used to get used to the atmosphere there, after that it seemed to be a little bit serene. The thing was that now when the ferry is open deck, what are we sitting down there, so we went to see what kind of atmosphere is there in two of the five passengers. Now, once on the deck, if there was a crowd there, it was astonishing, because almost all the people were present on the deck. Someone was standing and someone was seated and everyone was looking at the glory of blue, look down, blue water, lift your head and look at the blue sky. As long as Havelock was near, there was a little green color, after that something looked like then just blue sea. So far, our other partners had also come to the deck. See the beautiful scenes in the whole journey, take a lot of photography, praise some of the beautiful scenes here. Along with this, when the ship was eating hichkola between the waves, the titles of the children coming in their time were also remembering, "If you do not have any kind of wave, ripple wave ray water, neither immovable nor immovable my ship".

Traveling with the children in the open deck requires a lot of attention, because the kids do so much more then they get a little bit risky, we did not have much trouble in this matter because the little partner slept For a long time, after eating hiccos in the middle of the blue ocean and blue sky, it was time for sunset and here the Andaman's second finest sunset was shown, The sadness of not seeing the sunset in the rajnagar has diminished slightly. Here the sun deity has shown its every color with the open sky. Never like a fire ball like a bright spot in the middle of the golden sky. Then the moon was also blessing us with free hand. Yes, the full circle of moonlight also appeared to us here. But despite the appearance of both the sun and the moon together He could not take them together in the photo because the directions of both were different according to the hope.