Spooked out in Praha! 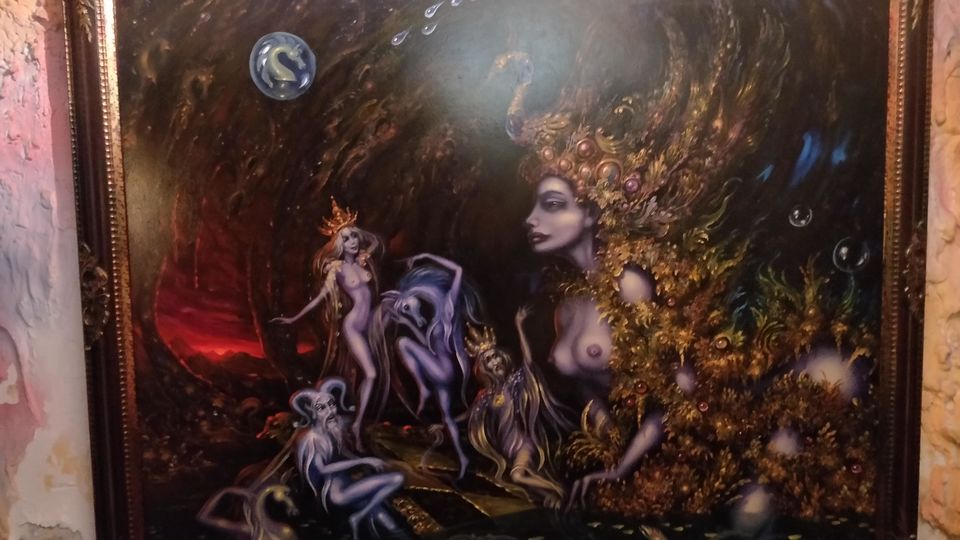 It was getting dark. There were seldom people on the road. The path through the park was really isolated at this time of the day. We were heading back to the city from the Pražský (Prague Castle). We came on this long road through the park hoping to get a view of the sunset, but after all these hours of walking we couldn’t find a place with the view.

“Hello there! Welcome to my magical cavern!”, a man with a hat and gown appeared from nowhere. “Come on in and take a look”.

My heart skipped a beat. “Thanks, but we are not interested”, I said without stopping. “Where did he come from?”

“I did’t see him come either”, Kayla gasped.

“Just 3 Euros per person and free sangria!” , The man called out.

I could see the glitter in her eyes.

“Do you want to check out the place?”, Kayla asked. She seemed pretty caught up with the idea of free sangria.

“Well, why not, after all its free sangria”, I joined her mood.

We walked back to the entrance of what looked like a really old house. There were no lights nearby other than the street lights. Nobody else to be seen on the road either. We walked up to the guy in the hat and asked him what it was. He explained to us that it is his art exhibition and it is only 3 euros per person and we could have free sangria. We looked around and all we could see was a spiral stairs going up and down from the entrance. Without thinking much we agreed to go in and paid him 6 euros.

“Thank you, you can go downstairs and view the exhibits. Enjoy the sangria on the table. I will close this door now, just ring the bell when you want to leave”, said the hatted guy with a sly smile and closed the door behind us.

The whole ambiance had turned out a bit strange. There was no need for him to close the door or in fact lock it up. Looking at each other and nodding we climbed down the spiral stairs. Painting were hanging all around the wall. Almost all the paintings had mythical creatures and naked woman (a lot of boobs, which I enjoyed to the most part). But there was something spooky about the paintings as well. All the characters in the painting seemed eerie. It had a sort of peculiar appearance.

As we went down the stairs, we could see more and more painting of similar kind. The room below was covered in a texture which looked like a cave, it had paintings and sculptures all around. There were heads made up of stone that looked like a wizard’s. There was music playing which was soothing. The whole place had a a fairy tale touch to itself.

“It does feel like that in here. Maybe there is door here somewhere which will lead to Narnia!”, replied Kayla with a grin.

“Hmm. The guy did seem a little odd. He was limping also”, I said walking to the next room. “Sangria! There is something that looks like sangria over here”

I walked to the table to which had a jar of water, juice and sangria.

“Do you think he would have spiked the drinks?”, I asked half jokingly.

“He could be a psycho or a serial killer. Or he could be trapped in this place and his last resort to freedom is only if he gets someone else to take his place and in this case, that would be us. And we can only get out if we bring in other people like us?”, Kayla said with a serious face.

Even though she was joking, when I though about it, there was possibility to some extend of what she said. The guy could be trying to kidnap, steal or worst case scenario rape people who wandered in the park after dark.

“There is an awful lot of sangria here. I think he wants us befuddled with this. You go ahead and take a sip. If nothing happens to you in the next ten minutes, I will have pour myself a drink”, I said with a grin and I poured Kayla a glass.

She thought for a moment and then she took a sip and said it didn’t taste bad.

I decided take the chances and to have a glass myself. As I sip on my sangria, we hear other people’s voices coming from top. Couple of minutes later, we see three guys climbing down the stairs to the hall we were in. We were a bit relieved to know that we weren’t alone.

We mingled with the guys and found out that they also felt something odd with the whole ambiance. However, we were not really afraid at this point. We all sat down on the couch drinking sangria and started talking about how weird the hatted guy was. One guy even suggested that he might be a leprechaun. Suddenly the hatted guy climbed down the stairs and came to the hall we were in. He saw that the jar was almost empty. He took the jar and went inside the kitchen right next to the hall and brought it back filled and told us to enjoy the sangria.

Kayla, had finished her second and was going for the third glass. The hatted guy stuck around for a while and chatted with one of the other guys and at that time we realized that he was limping because he was pretty drunk himself. He went inside the kitchen murmuring to himself and came back with a door handle. He handed the handle over to Kayla and climbed up the stairs.

We all drank some more sangria and laughed about a door being there, which would open up to Narnia and this could be the handle for that. After finishing the fourth glass we climbed up the stairs to another floor where there were more paintings of fairy-tale characters and more boobs.

I told Kayla that we should be heading back to the city as it is getting late. We bid adieu to the guys and headed to the main door. We got a chance to meet the artist at the main door. We thanked him and the hatted man for the paintings and the sangria and exited the house.

We were both laughing at ourselves thinking about the whole thing that had just happened.

“I am glad we went inside that house. It was spooky, creepy and fun all at the same time!” I said as we strode down the hill towards the streets.

“Even I am glad we went inside. Also, the sangria was pretty good! I am a bit tipsy after 4 glassess. It was a good deal for 3 Euros! We should have drank some more”, said Kayla

“True, but we are running late now and I have a bus to catch. Before that we need to try the Goulache”, I said pulling her along.

The day in Prague was well spent! It would not be complete without savoring the Goulache(Goulash), so we headed towards the city to find a restaurant before we go on our separate ways.

PS: We were at ‘Reon Argondian – Magical Cavern’, for those of you who are wondering.

Bonus: Goulache was yum! If you have not tried it, you have to try the authentic Beef Goulache.