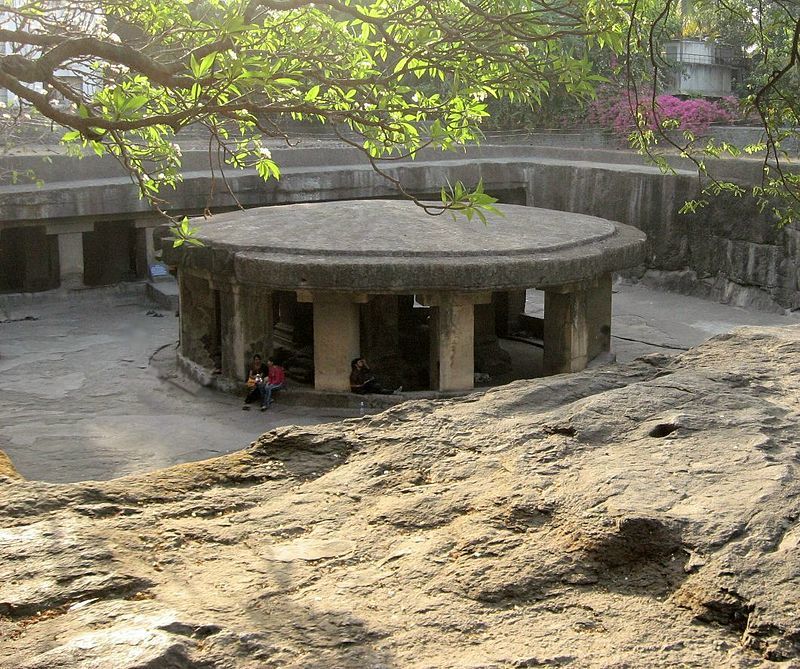 Well  Pune is the city of cultural ikon thus this caves are must watch on your list if you ever visit Pune.

The Pataleshwar Cave Temple (also called Panchaleshvara or Bamburde) is a rock-cut cave temple, carved out in the 8th century in the Rashtrakuta period.[1] It is located in what is now Pune, in the state of Maharashtra, India.

It was originally situated outside the town, but the city limits have expanded so that it is now located on the downtown Jangli Maharaj Road. It has been declared as a protected monument by the government.

The temple, made of basalt rock, is dedicated to the Hindu god Shiva. The sanctum - a cube-shaped room about 3–4 metres on each side - houses a linga - the symbol of Shiva and there are two smaller cells on each side.

In front of the cave is a circular Nandi mandapa, its umbrella shaped canopy supported by massive square pillars. This mandapa is one of the peculiar structures of Pataleshwar. The cave is located at a lower level than the present level of the road and the cave complex.

There is an exquisitely carved circular Nandi shrine in the huge courtyard of the cave. The main cave is rectangular on plan and has a pillared porch. There are three sanctums in the cave temple and the central one houses the Shivalinga.

There is a circumambulation path provided in the cave where one can see the unfinished part of the cave temple. It appears that after finishing the front and the sanctum the cave was left incomplete due to some reasons, one of which could be the faults in the rock. However the walls in the main cave have some outlines drawn suggesting the sculptures depicting stories from Indian mythology, especially involving Shiva.

The huge complex of the cave has been converted into a garden and there are a few architectural members stored in it probably belonging to some old temple nearby. As this is the oldest monument in Pune, which is over 1300 years old, the Pune office of the Archaeological Survey of India is located in the adjacent property.

The temple was left incomplete, possibly because of a fault line found at the back of the sanctum sanctorum, which made the further sculpting unsafe, or political upheaval resulting in loss of patronage. Still in use, the linga is anointed with ghee and yogurt. A brass temple bell hangs outside the basalt entryway.

SPONSORED
Want to book a similar trip?
I accept the Terms of Use and Privacy Policy of Tripoto.
SPONSORED
Related to this article
Things to Do in Temple,Temple Travel Guide,Weekend Getaways from Temple,Places to Visit in Temple,Places to Stay in Temple,
Tagged:
#cave#temple#nature#pilgrimage