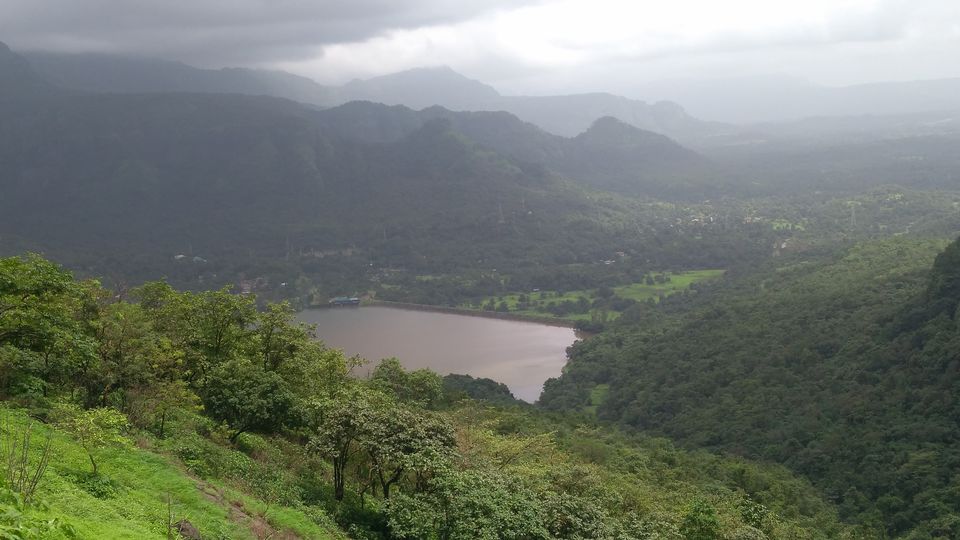 An overnight drive from Mumbai to Pune for the Andharban trek will not let you rest. The initial bumps on the road make way for narrow winding lanes, both not conducive for sleep. However, the ride can be salvaged by witnessing the sights on offer, masked in their solitude as moonlight offers a passing glimpse of life in the middle of nowhere. We make way through hamlets with night owls warning about the path that lies ahead, the turn that could be missed. The ride progresses, and the break of dawn reveals a heavy mist which has now engulfed the dense forest. The air becomes cooler as it starts drizzling. There is no urge to rest now as the cool air rejuvenates us for the trek to follow. Apart from the initial bumps, the roads leading up to the Pimpri Dam, the base point for the trek, are in perfect condition. The place is quaint which adds to the experience and hasn't been mindlessly encroached upon like some of the treks in Himachal Pradesh.

There is at least one home-stay, namely the Andharban Forest Home-stay near the base point of the trek where one can rest for an hour or two and have breakfast before beginning the trek. For those wanting a quick bite, there are Dhabas where one can gorge on Maggi and Paranthas. 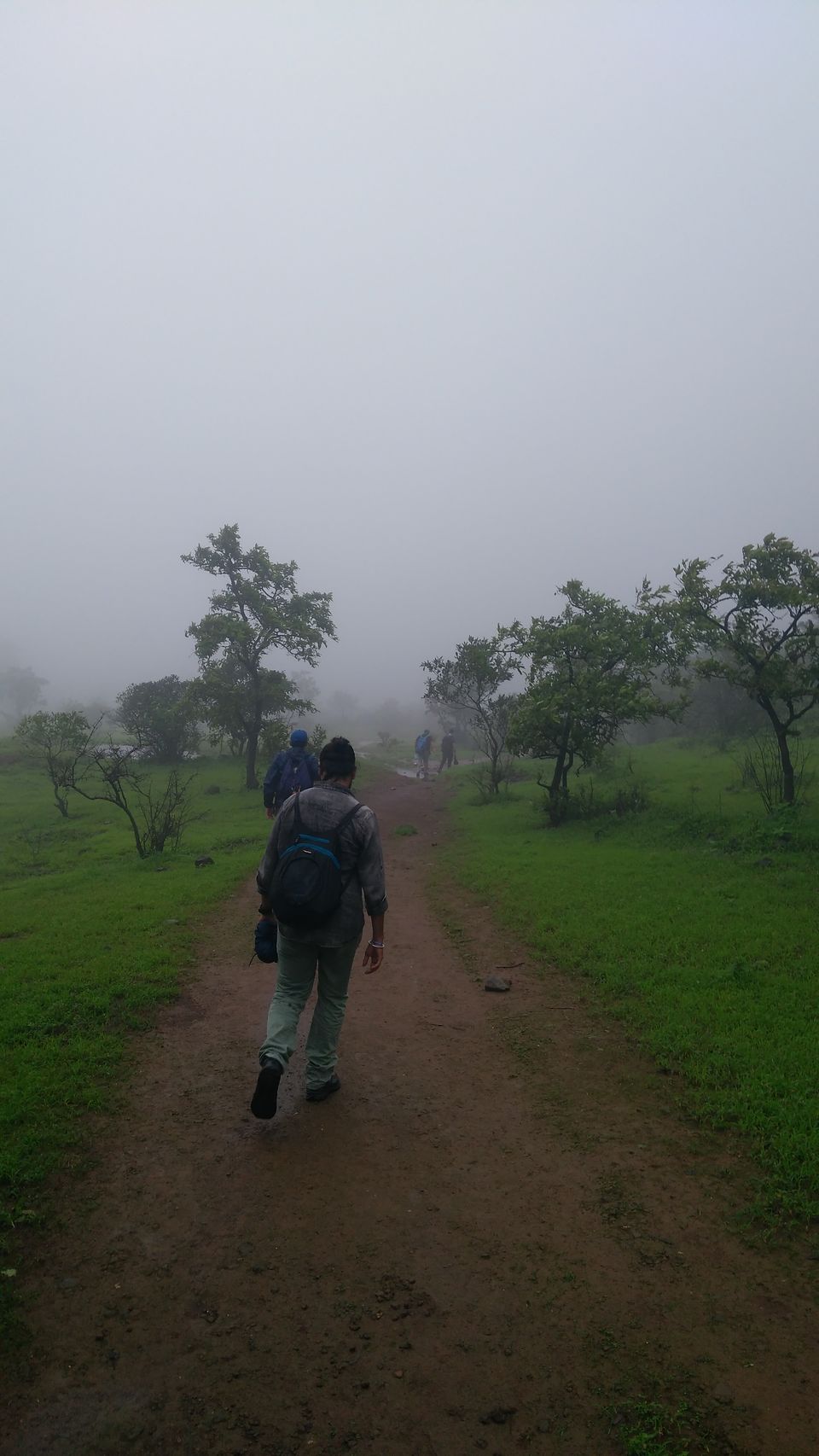 We reached the Bhira Dam which is the end point of the trek at 5 p.m. The incessant rain and the heavy undergrowth were troublesome and prolonged the duration of the trek. Nevertheless, it is ideal for those who are new to trekking and will, in all likelihood, spur some to embark on more challenging treks in the future.

The initial couple of kilometers of the trek gives a semblance of being in the plains as we walk amidst lush green surroundings. That serves as a prelude to the passage that follows for the trek undergoes a steady incline thereafter. Dense forests coupled with heavy undergrowth make this passage a rather uncertain one; one needs to tread carefully for the path is often waterlogged and slippery owing to the rains and moss. There are also numerous waterfalls on the way which serve as pit stops. 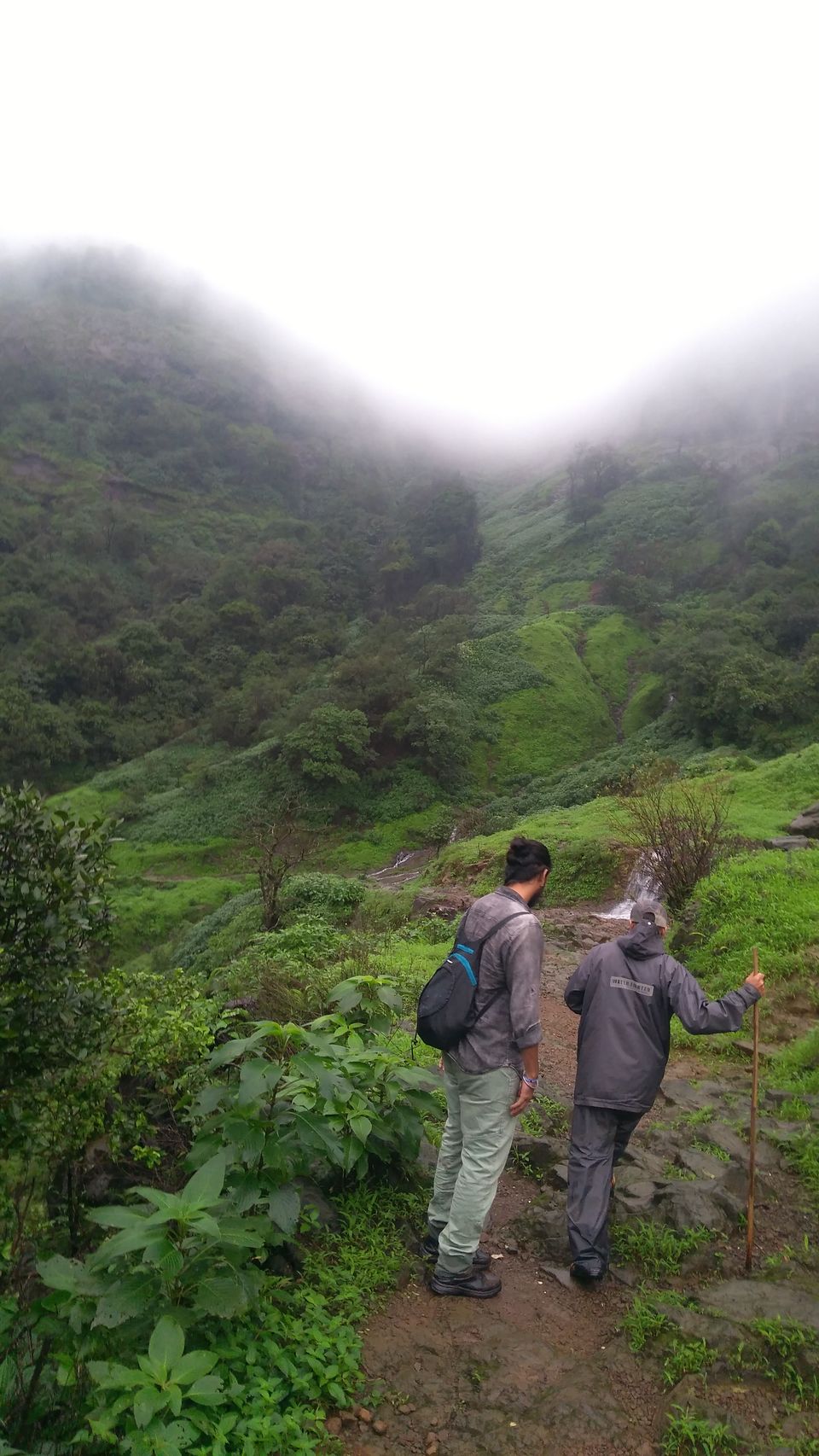 After five hours of negotiating the rugged terrain of dense forests, the incline was complete and we came across a vast expanse, an opening. The rocky path leading to this spot dissipates, allowing one to disengage one's brains and take a leisurely stroll. The sun shines brightly but the drizzle doesn't cease and there is a good chance of a rainbow being sighted.

We were supposed to rest at Hirdi village which is the first stopover as the descent begins but this particular spot seemed ideal for a stopover. Snacks were unwrapped, one thing led to another, and lunch happened.

The descent was tricky, mostly because of the heavy undergrowth which made the steep decline treacherous. Even the most seasoned trekkers in our group seemed prone to a misstep here and took at least a couple of falls. Newbies like me were slipping a lot more, every fall making me rue the lack of grip on my non-trekking shoes.