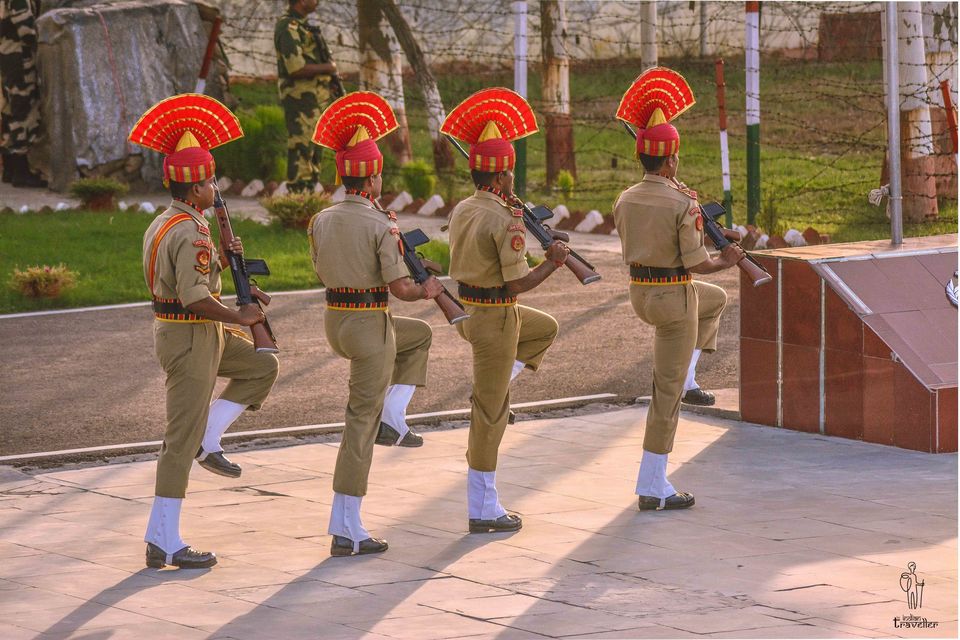 Saqdi, Punjab - One of the three places to host joint retreat ceremony

Recently I read an article about Sadqi being the third place to host joint retreat ceremony after Wagah-Attari and Husainwala. I visited this place two years before and at that time too, it was an amazing experience.

Sadqi, a beautiful village about 13 km from Fazilka in Punjab is a check point on the India-Pakistan border now all set to be the third of joint check points (JCP) to hold a joint retreat ceremony between the Border Security Force (BSF) personnel and the Pakistan Rangers.

When I went to this place, the ceremony involved just the lowering of flags on each side of the border, and a ceremonial march unlike the one in Wagah and Hussainwala, where the personnel cross the zero line, and shake hands before lowering the flag. So here, the gates weren't opened and there were no handshakes and zero line crossing before the lowering of flags.

As Sukhdeep Kaur rightly puts it, “Sadqi is no Wagah. Here the ceremony happens just where the fields end, a quaint show just before sundown. There are no ceremonial gates that are slammed shut – Pakistan has no gate while the Indian one lies closed with a barbed fence. The BSF jawans, perform their drill near the barbed fence, while the Pakistan Rangers are positioned on a hillock that’s painted in the camouflage colours of green and grey.”

Also, unlike the Wagah and the Hussainwala, Sadqi got a checkpost for its gates, an open-air-like theatre and a music system. The tourists who usually visit the Sadqi retreat also visit the Asafwala War Memorial which was built to pay homage to the martyrs of 1971 Indo-Pak war.

This is my visit to Sadqi Ceremony, in pictures.

Entrance to the ceremony area, on India side 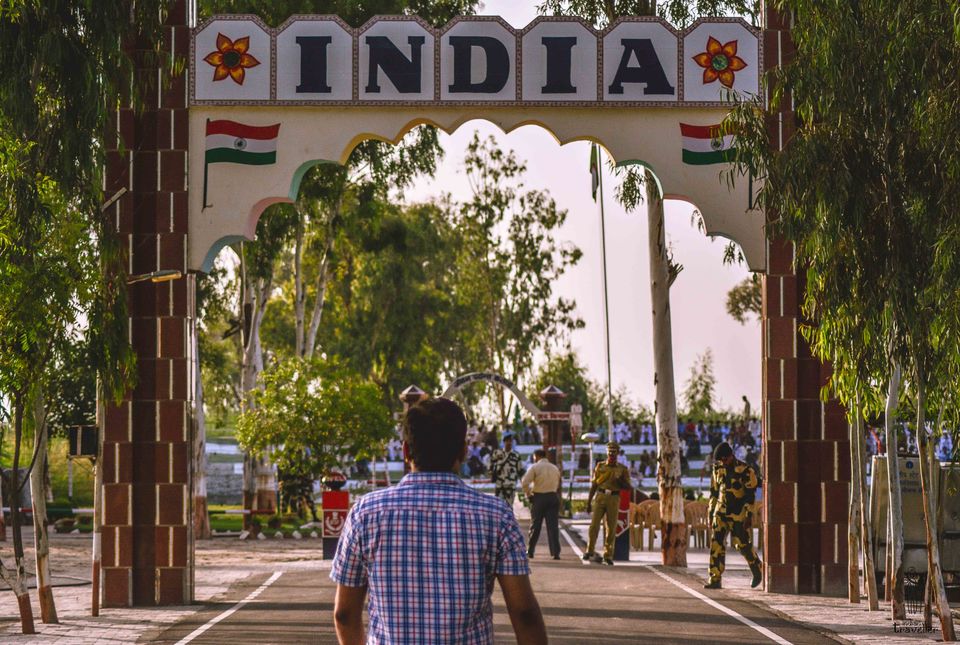 Pakistan open air theatre as seen from the Indian side. The zero line is very close to where the audience sits on both sides. 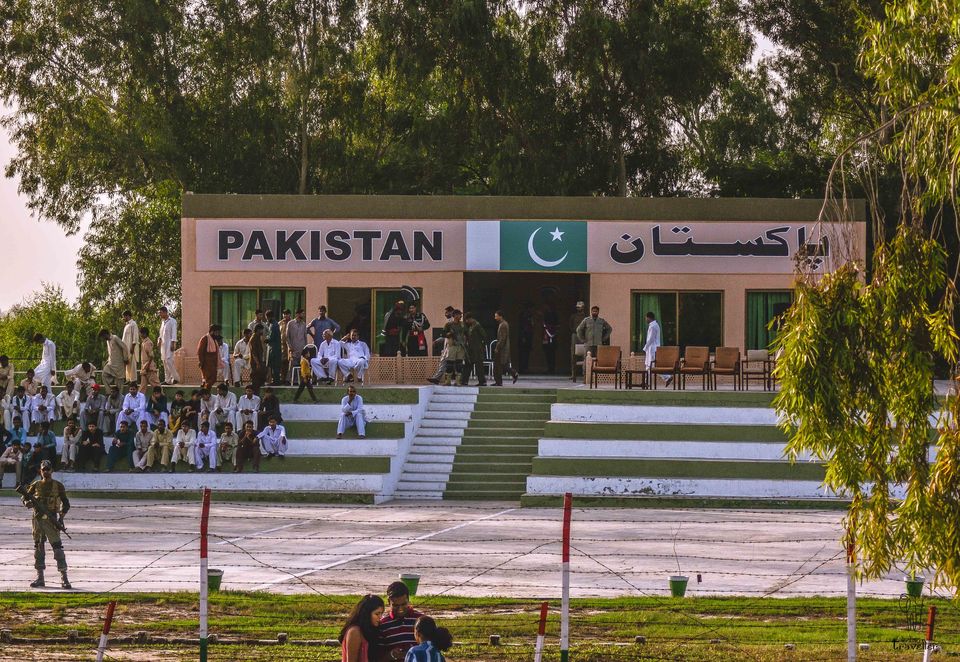 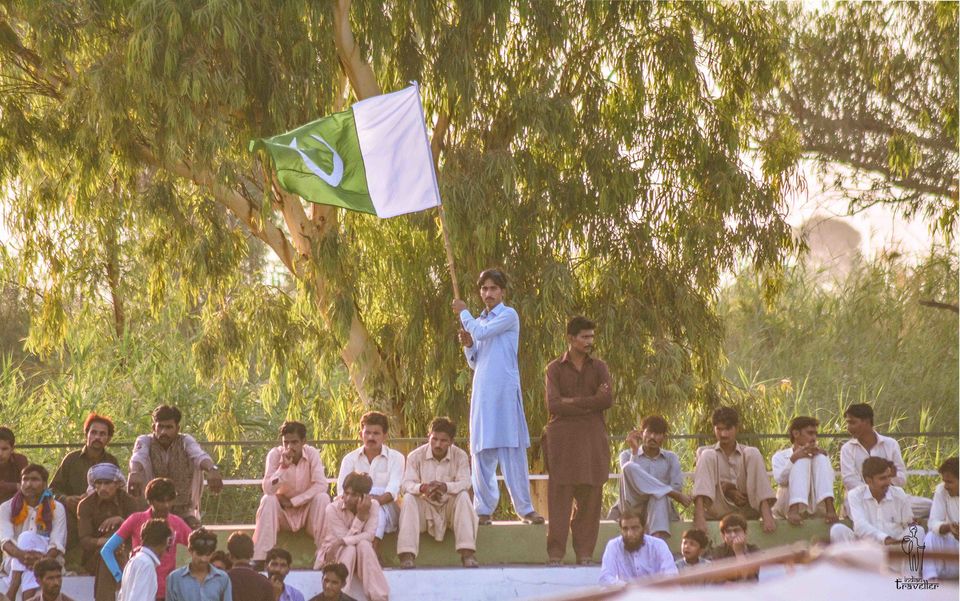 High level Security guards are appointed on both side of the border, this is in Pakistan. 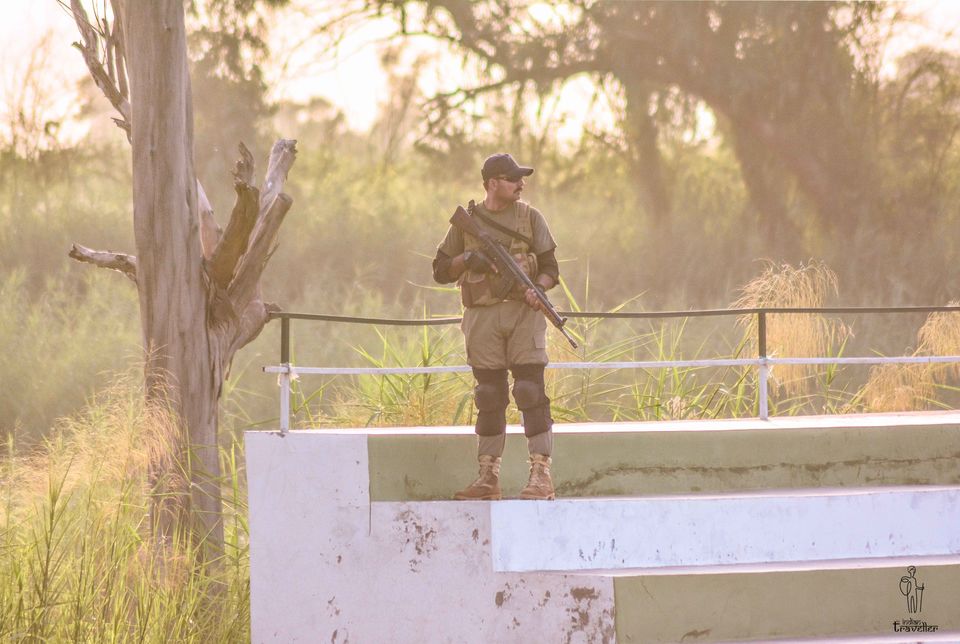 The march before the flag lowering takes place 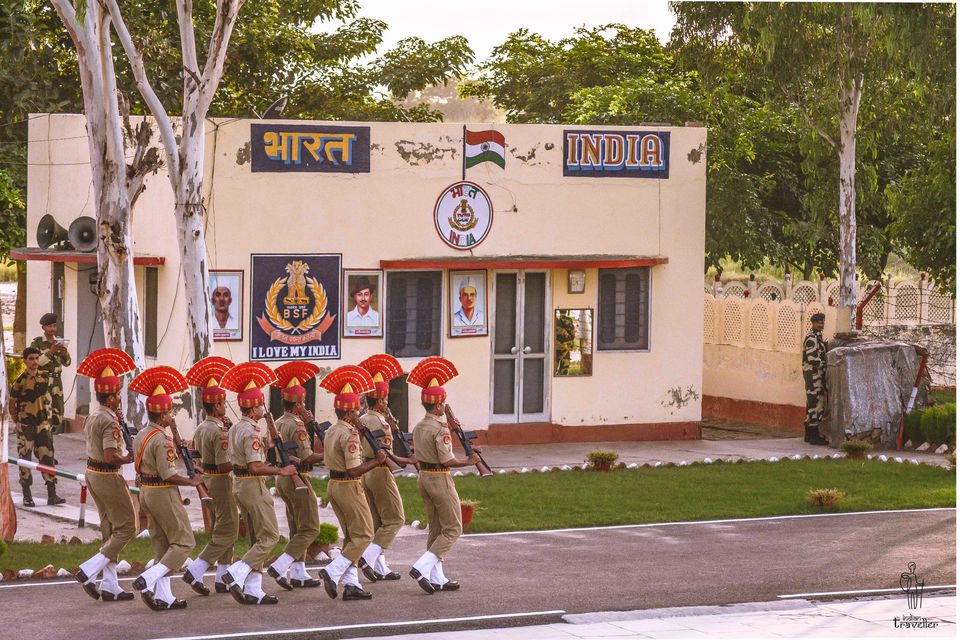 The march before the flag lowering takes place - 2 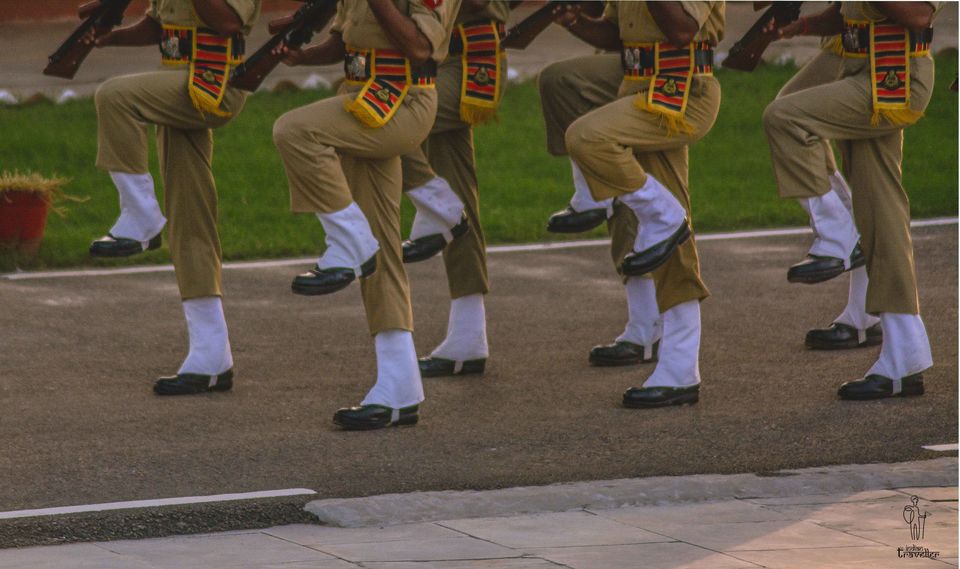 Right after the march is over, one soldier from each side moves close to the gate and with full zeal challenges the opposition and shouts Jai Hind. 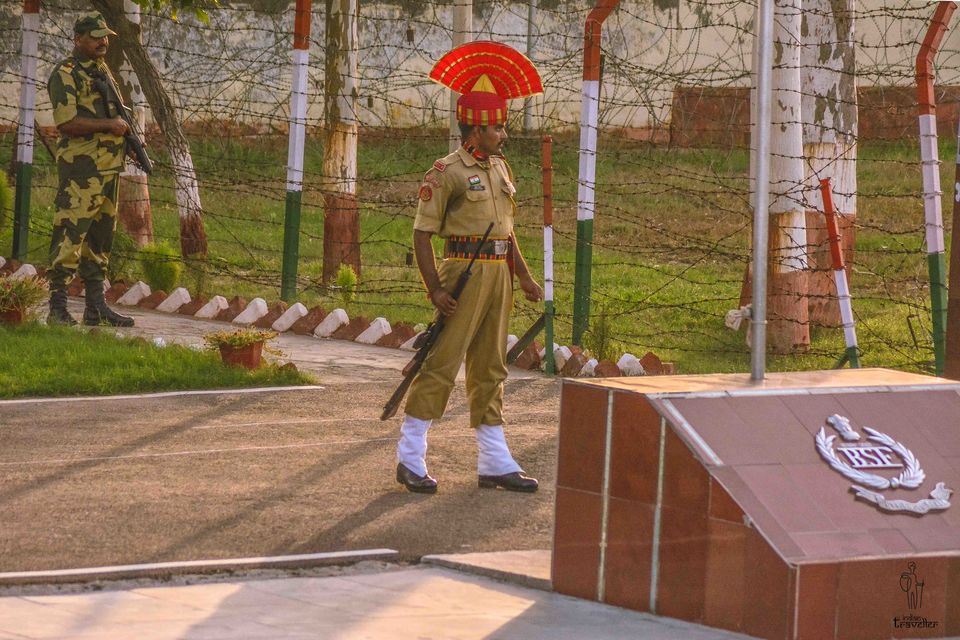 Right after the march is over, one soldier from each side moves close to the gate and with full zeal challenges the opposition and shouts. 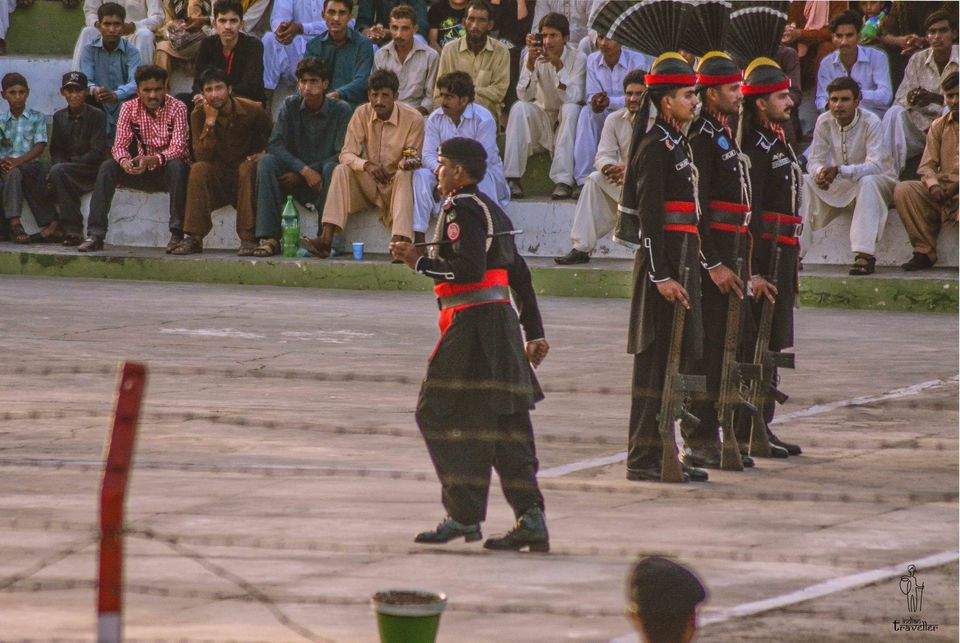 A school kid on Indian side, excited about the ceremony 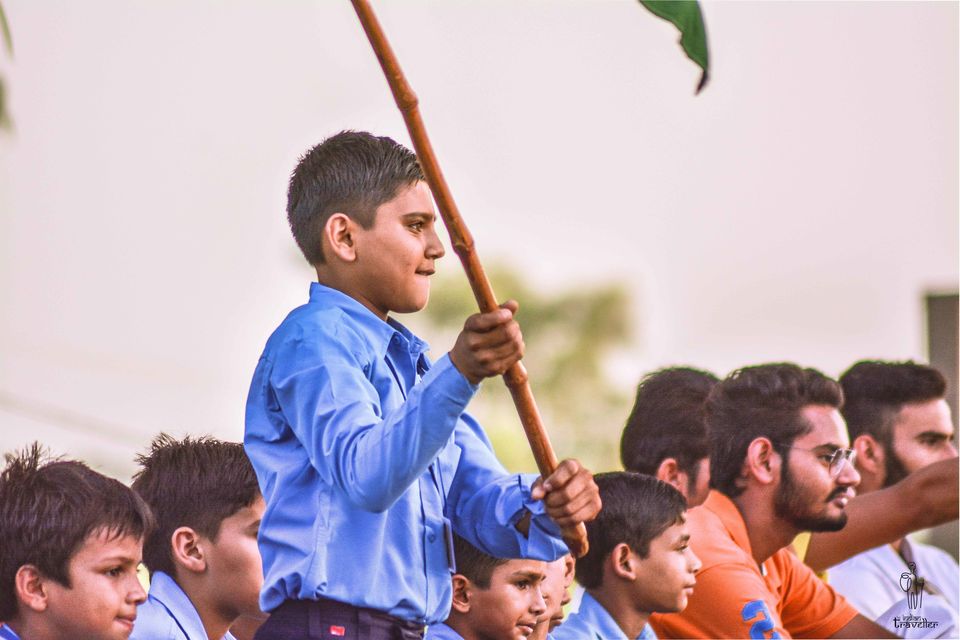 Chanting 'Vande Matram' loud, these kids made this place amazingly lively and it was a treat ti watch these kids. 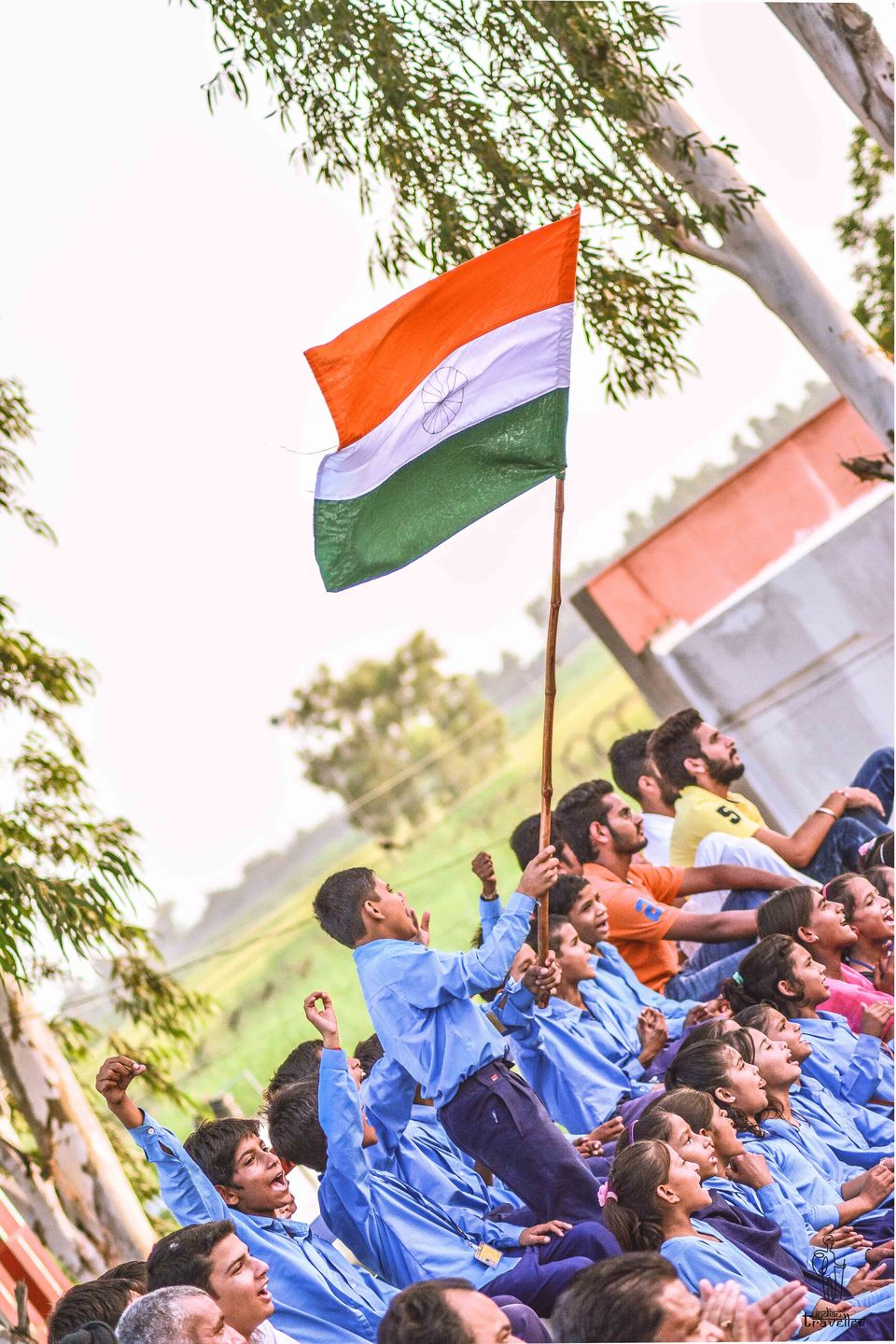 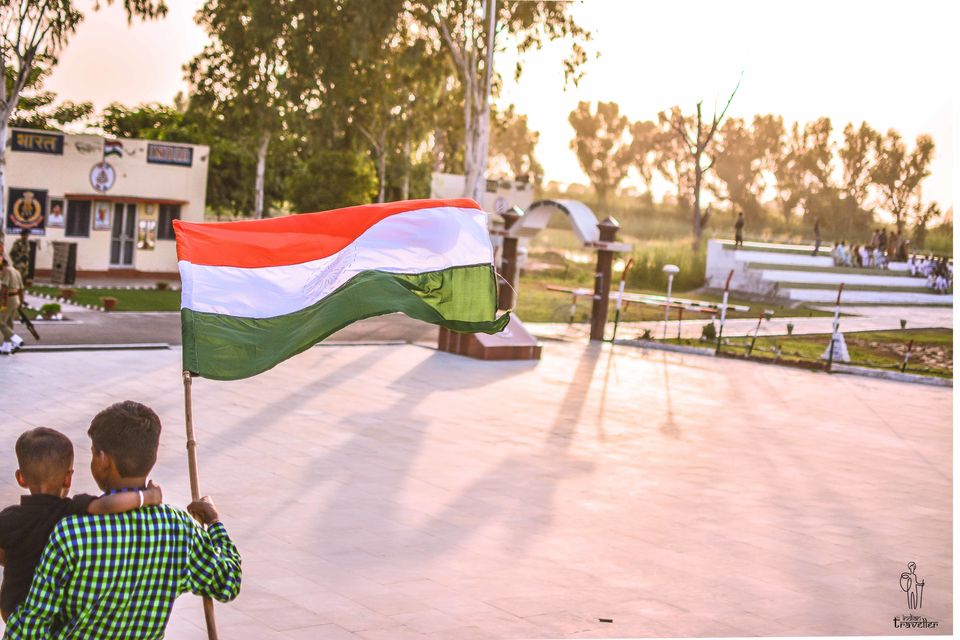 Chanting 'Vande Matram' loudly, these kids made this place amazingly lively and it was a treat ti watch these kids. 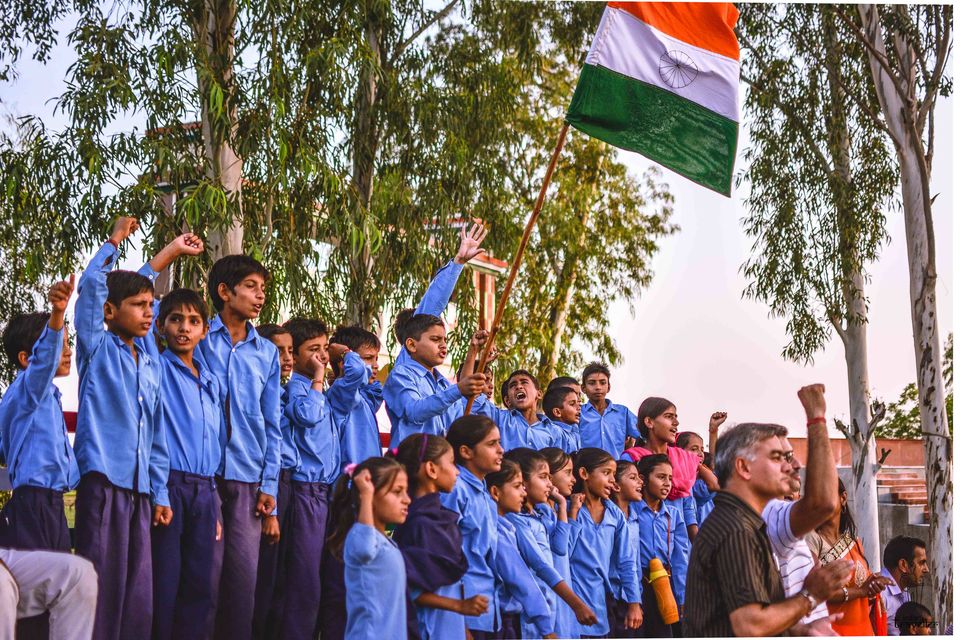 Lowering of the flag on Indian border 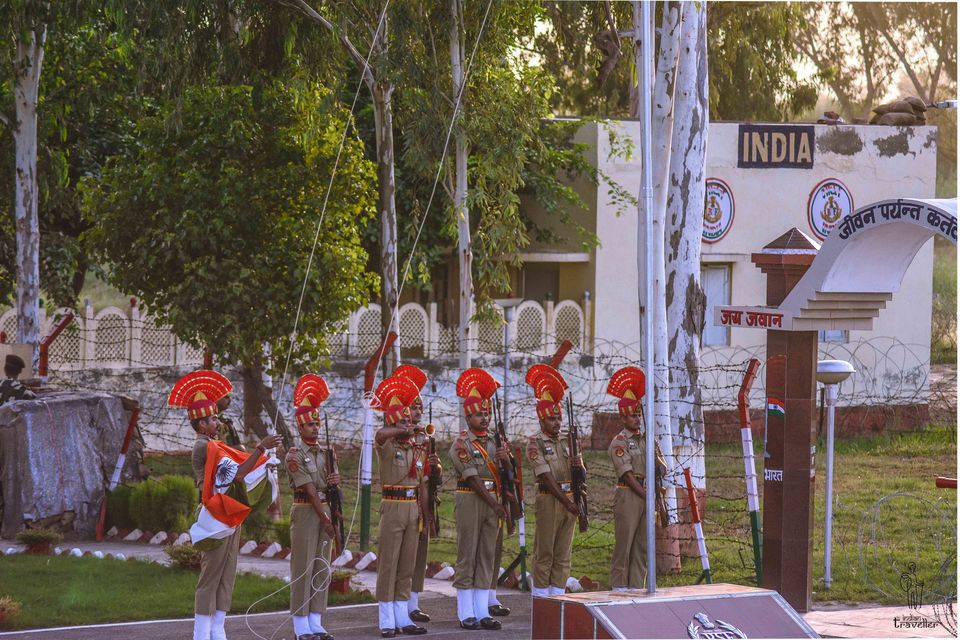 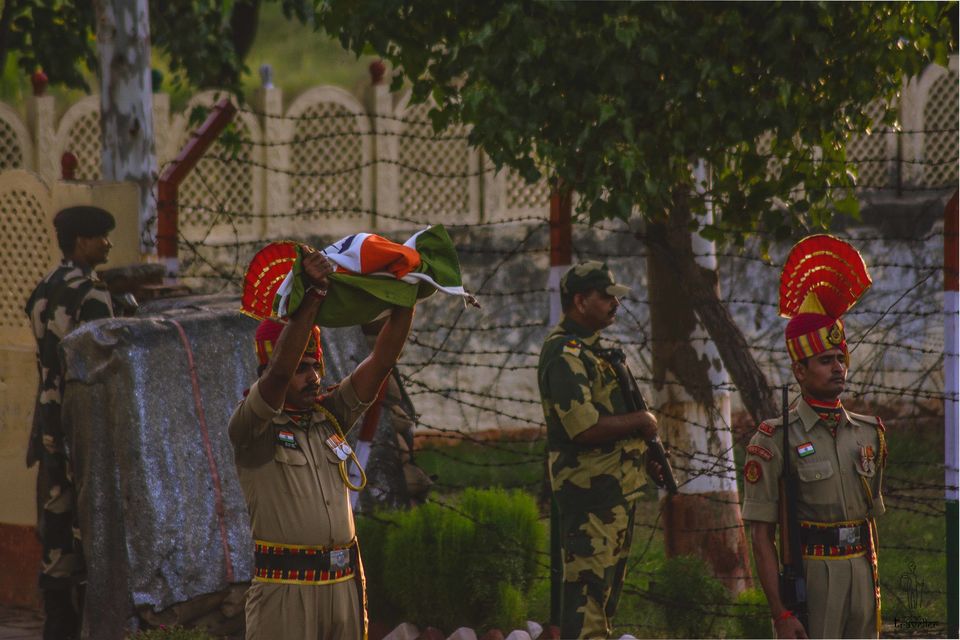 Pakistani rangers marching back after the retreat 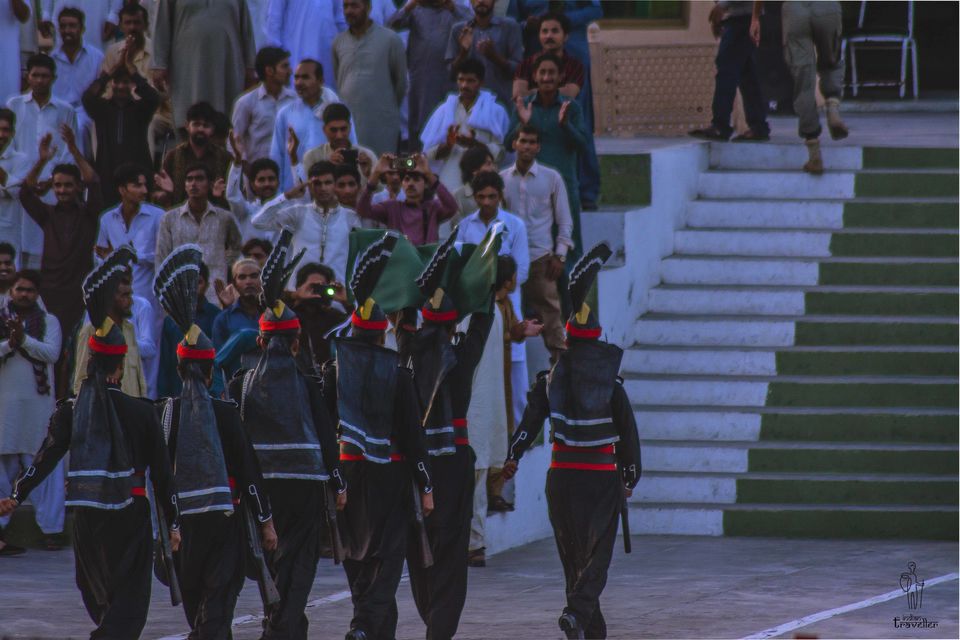 Families gathering around the Jawans to get pictures clicked 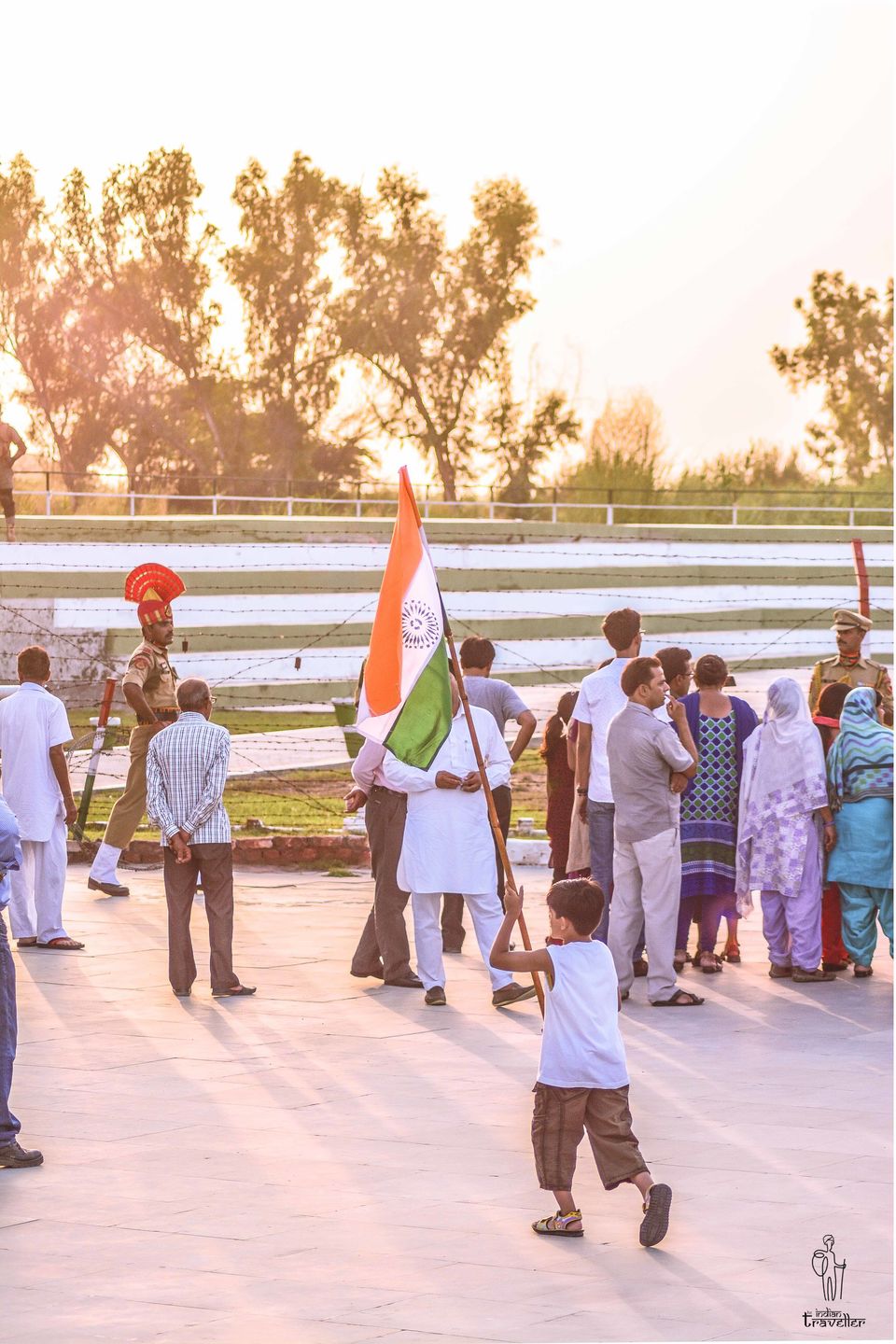 A group photo of school children, soldiers and the faculty. 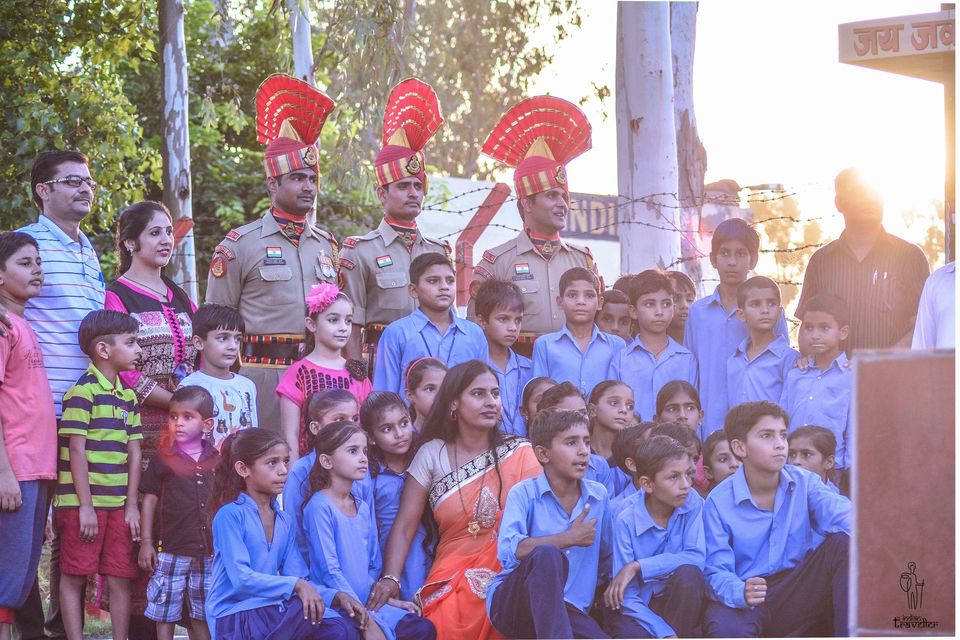 With many visitors daily, the Wagah-Attari function is the most well known, and has been held jointly since 1959. The ceremony at Hussainwala started in 1970, when one night the then BSF Inspector General Ashwani Kumar Sharma called the authorities and declared that joint retreat function will be held, which turned into the practice from the exact following day. The Indian jawans wearing khaki, walk up to the zero line, and match their walk with the Pakistani Rangers, wearing their pitch dark uniform.