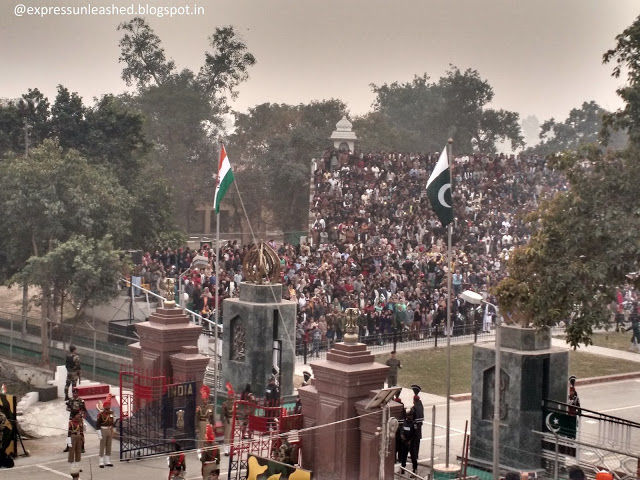 When words fail you and you feel the adrenaline gush while watching the army parade, that's when you are at Wagah Border, Amritsar, facing our rival neighbor Pakistan.

This visit was the first for husband after he fretted and frowned over not being at Wagah even once. YouTube has endless videos of the ceremony, yet it is a different feeling to witness the same in person.

The event, named beating retreat ceremony, takes place every day in the evening, when the gates of two counties India and Pakistan are opened and the flags are lowered. Prior to lowering the flags, security personnel from both sides march to the gate, thumping their feet, showing their aggression and pride for the country. Higher the foot in the air, louder are the cheers. This military practice takes place between Border Security Force (BSF) and Pakistani Rangers, amidst huge cheering crowd at both sides.

For the records, I had visited Wagah Border twice and each time I witnessed something new. This time (on the third visit) I witnessed new constructions, more seating capacity and of course longer queues.

Reaching the venue is a huge task in itself. In case you do not have a pass, you are advised to reach the venue as early as 2 pm. If you have a pass issued by any Army "connection" of yours, you have to patiently wait for your pass number to be called out. Our pass number was called out around 3:15 and by the time we reached Attari Border, traffic turned out nightmare. You also have to pay toll in between before reaching border parking.

It was quarter to four and we had not been able to park our car. Seemed an entire country was here to watch the beating retreat ceremony. Husband parked the car at a crammed up spot roadside, like thousand others had. We jumped into action and fled through the numerous VIP check points displaying our id cards and confirming our names on the list. The security personnel at Wagah work round the clock and managing crowds of thousands is not an easy job for sure. The least we can do is cooperate with them and not argue when they ask us to maintain discipline.

The VIP pass is no guarantee of a fixed seat or closer view. That’s exactly what happened with us. By the time we entered the “amphitheatre”, the front seats were full. We got a place somewhere in the last few rows. The visibility of Indian parade was difficult and taking pictures was next to impossible from there. But the vantage point gave a good view of the Pakistan side. This is how we find positive things among negative.

The show started with lady officers marching towards the gate followed by cultural programs, canine unit march and BSF soldiers’ parade. The show emcee, clad in white, encourages crowd to cheer up and give a tough competition to Pakistan. The decibel level reaches a new high with every hand signal of his. As the crowd goes berserk competing with hoots from Pakistan, you can feel the contagious energy gripping you.

The soldiers march ahead, in perfect sync, saluting the national flag and standing tall with pride at the border gate. In come the BSF officers to face Pakistani Rangers raising their feet high in the air and thumping with full might. The thump is followed by caressing their mustache or adjusting their cap, with an air of smugness. The officers are supposed to show their aggressive side, also meant to warn the rival country what we are capable of. The “mess not with me” message shows in their eyes and body language.

Meanwhile crowd from both sides cheer up with slogans praising their country. At sundown the flags are lowered, representing peace and harmony in spite of the conflict both the countries have.

As the ceremony closed and the crowd prepared to leave, all my enthusiasm died seeing so much garbage left behind. Is all the patriotism only shown with slogans and cheering up for BSF? What happened to the basic civic sense? It is extremely sad and disturbing when the fellow country people behave so. All plastic and garbage littered by the crowd would be cleaned by the BSF admin staff. What’s patriotic about it?

Keeping the security in mind, BSF security personnel ask people to leave ASAP. They did not let us contribute by cleaning up the staircase. It was against the protocol.

It took us more time to leave than it had taken to arrive, as cars were stuck in over crowded streets.

To reach Wagah- Take your own vehicle or hop in a public transport from Railway Station Road.

-Handbags are not allowed to the venue. Keep them in your hotel or car. Phones and DSLR are allowed though.

-Phone networks are jammed at Wagah for obvious reasons. Large groups should keep together. In case you get lost, it will be difficult to call anyone.

-In case kids or family members get separated, you can make request for free announcements at dedicated booths.

-Carry your own water bottles because bottles sold inside are expensive and unhygienic. Please trash them in dustbins. Littered place is a common sight there. Please refrain.

-Let the traffic clear before you make your way back. The noise, pollution and warm weather can create lot of confusion, stress and temper. The return way is more confusing and not the same that you took while arriving. All you need is patience and keep calm.