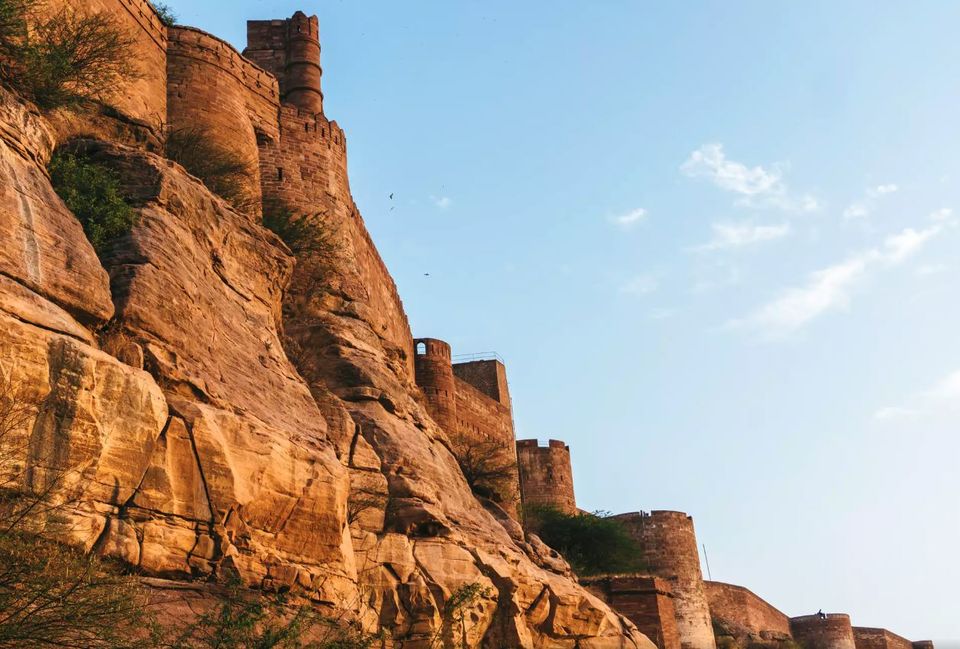 After Jaisalmer, we drove around 6 hours east to Jodhpur, the second largest city in Rajasthan. It is named 'The Blue City' after the bright colour of the buildings that surround the city's Mehrangarh Fort. The buildings stand out against the yellow of the sandstone buildings, especially of the fort itself.

We picked the area of Brahmapuri to walk around, it's west of the fort. The streets are slim and were quite quiet as we walked around; most of the people we seen were doing some chores in the house or taking some shade from the sun.

The Mehrangarh For sits well above the city's skyline. As one of India's biggest forts, it's hard to miss when you're walking around the city.

The changes through the 500 year development can be seen from the varied architecture and design throughout the fort. This fort has more history and culture on display in the various museums and galleries. The intricate gold paintings have been well preserved.

There is great views of the blue buildings that surround the fort. The blue shines through even during the warming sunset.

The day we visited the Mehrangarh fort was on the last day of the Gangaur festival. The festival is dedicated to Goddess Parvati and is celebrated by women all over Rajasthan.

I was lucky enough to spot a member of the Jodhpur royal family peek out from a window when the band started playing. She seemed pleased with the size of the eager crowd down below.

The end of the festival is marked with a procession where Parvati is paraded through the streets. We seen the procession start from the fort and head out towards the cool, blue streets that surround it.

The Sardar Market is as busy in the evening as it is the morning. Every day locals head here to purchase clothes or jewellery, daily staples like fruit, veg and spices, or drink some tea.

(This was one of the first proper times I had taking photos in really bad light at night, but while I'm not entirely happy with the set, there is still some good shots of the market in here).

The market seemed chaotic. Inside, there is rubbish wherever you look, stalls all packed up against each other and people everywhere.

As with most of the places we seen in Rajasthan, I was surprised at how relaxed the locals were with all the roaming cows. I even seen a cow tucking into some veg on a stall, with the owner fully aware but in no rush to stop it. I wouldn’t be too happy if I picked up some cow-munched veg here.

n the centre of the market is the Ghanta Ghar clock tower. It features a mechanical English clock which is still ticking away to this day.

The former king of Jodhpur, Maharaja Sardar Singh, built the The Jaswant Thada at the end of the 19th century. It's a memorial for his late father and hosts cenotaphs of other Jodphur royalty.

The stone and marble work on display here is of the highest quality. The tranquil gardens are a good spot to get away from the hustle and bustle of the city below.