What they don't tell you about deserts #desertsafari 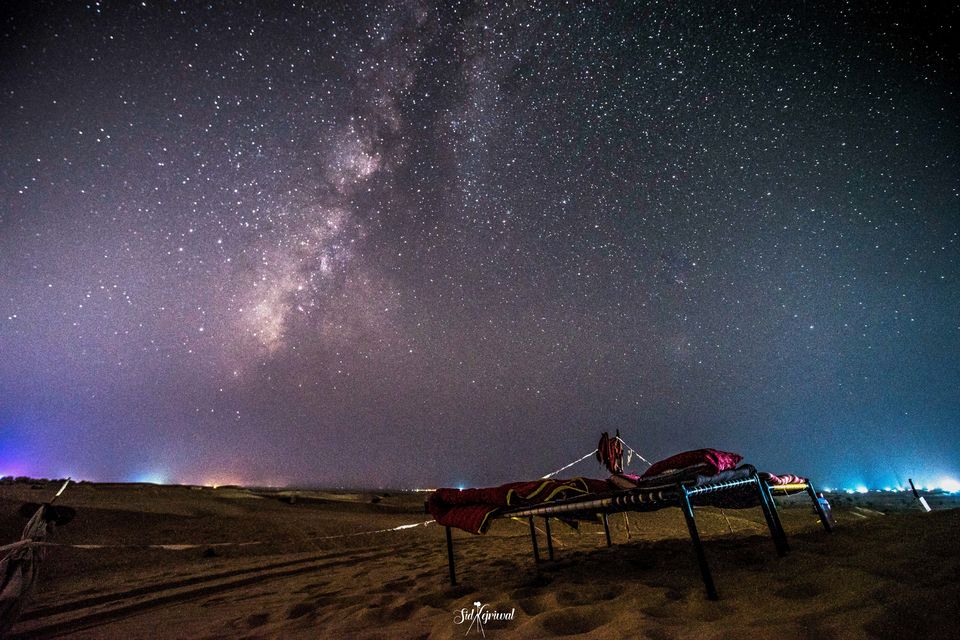 Any reference of Rajasthan or a desert simply puts an image of camels and sand dunes in people's minds. One can imagine oneself trotting along the dunes on a colourfully decorated camel, accompanied by men with twirling moustaches and colourful turbans gliding into the sunset. Kalbeliyas performing their magnificent art on Rajasthani Folk Music in the backdrop of a warm sunset sounds just a perfect end to the day.

Now, that is just too cliched and commonplace.

Being an avid astro photographer, I embarked on a mission to capture the lustrous side of the desert that rose way above the dunes, high up in the sky, glittering its glory out. We chose Jaisalmer which is the hub of desert tourism in Rajasthan for our ideal weekend getaway. Incidentally, Jaisalmer or the entire Thar desert for that matter comes under the most prominent dark sites of the country. Dark sites are basically areas which have negligible light pollution in the sky which makes it ideal for stargazing and astro-photography.

We chose a camp in Sam Dunes who had access to the virgin dunes deep into the desert. We drove into the desert on a Mahindra Thar on what I'd call the bumpiest ride of my life with bedding and blankets and enough food and water to thrive the night. We descended deep into the desert until all the lights coming out of the various camps died out. We stopped on a dune and unloaded our stuff. The darkness around us was eerie. It was so dark that we couldn't see anything further than 3-ft. A torch was indispensable to see each other or navigate. The only light source was the stars. It was so dark that when we got up in the morning, we felt like we were in a complete different place.

Want to hitch a ride to the galaxy? 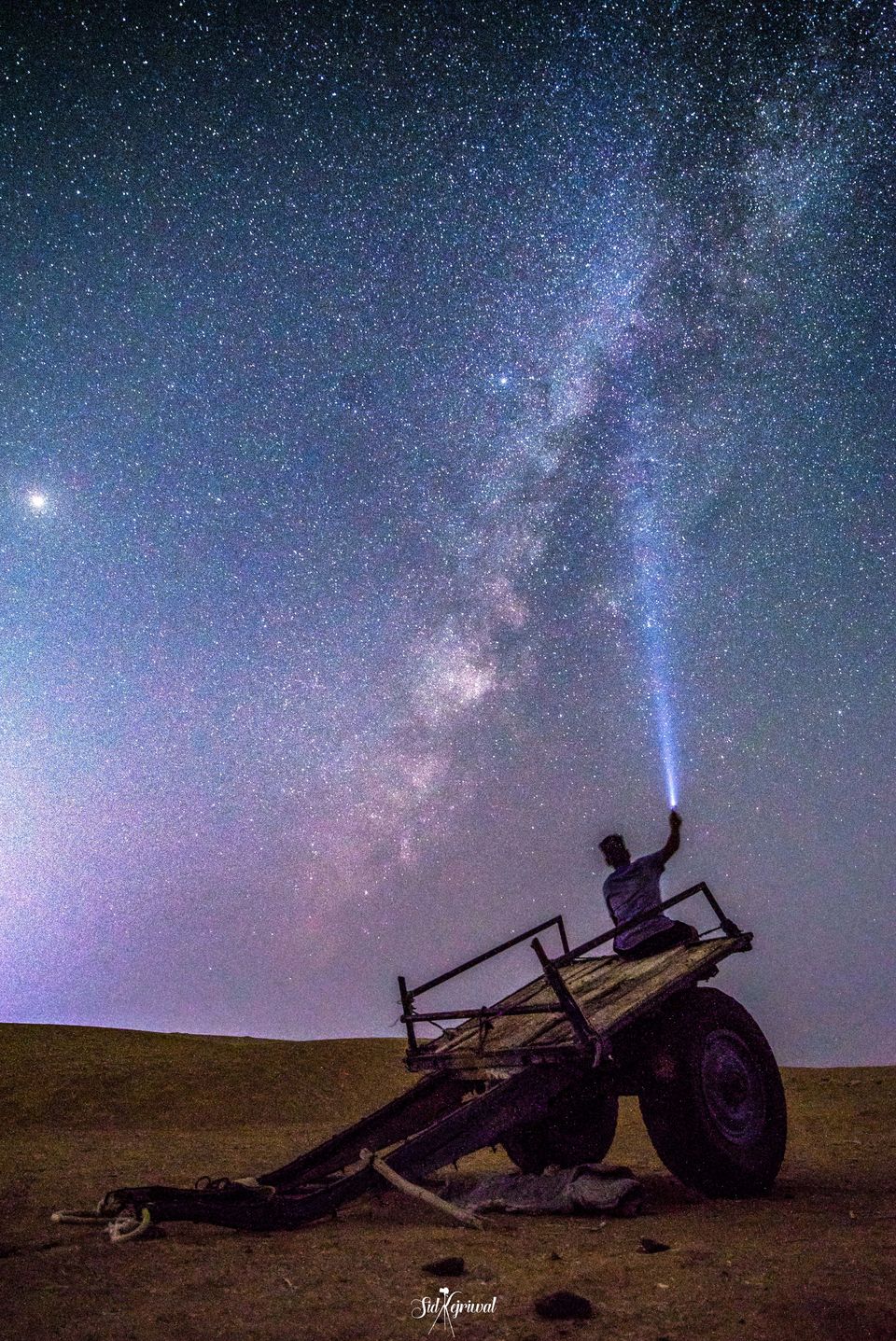 For all the people interested in stargazing or astro-photography, this is your place to be. The best part about this place was that the milky was was unusually clear and visible to the naked eye. Unlike other places where I've been to capture the milky way where I had to hit and try in order to spot the milky way, the galaxy here was crystal clear to the naked eye. 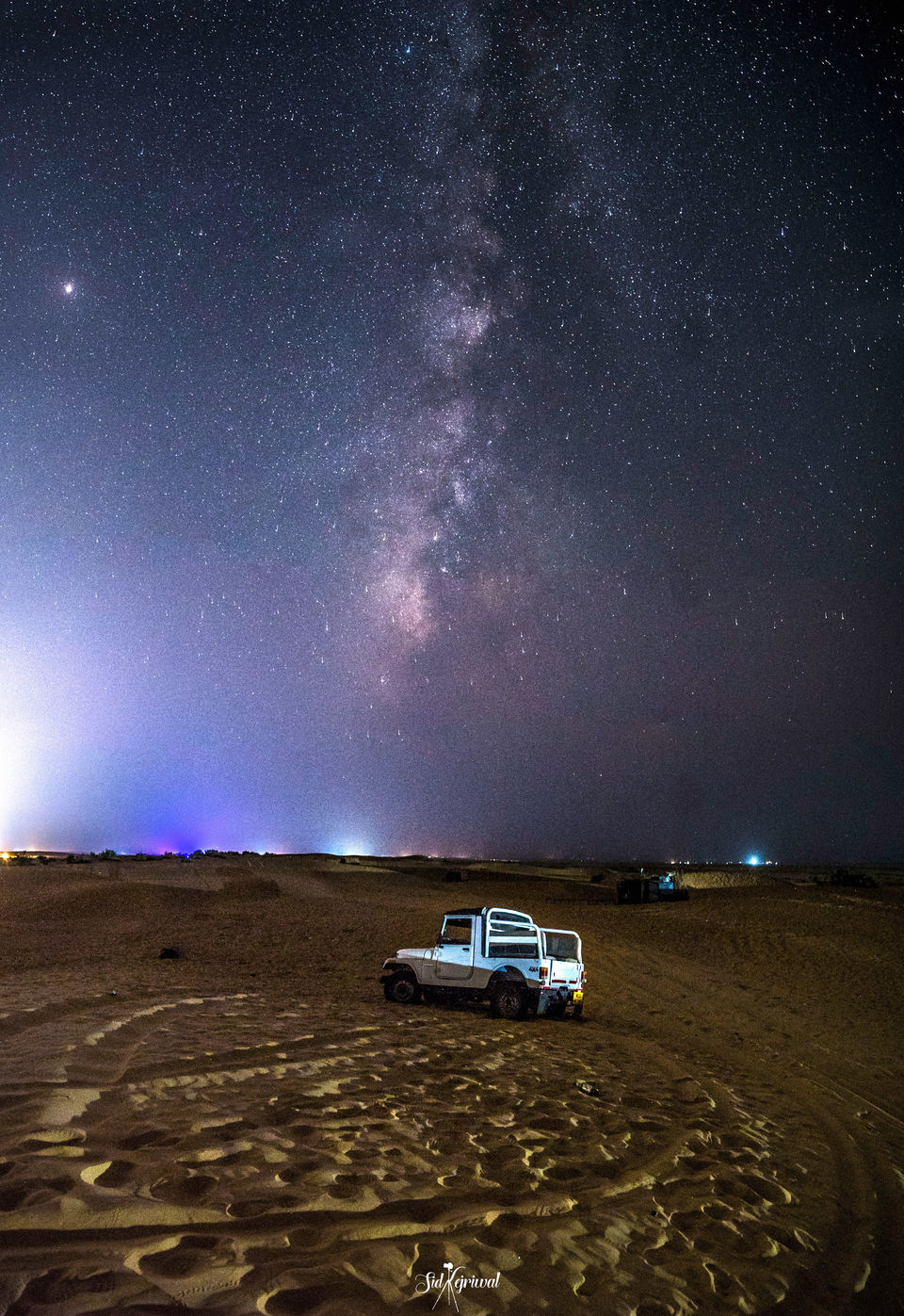 I set up my camera, aimed for our galaxy and starting taking these shots. After an hour of some crazy shooting, it was time for the stars to shoot.

We laid down on the 'khaats' facing towards the sky, and there! A star shot into oblivion. Another one went down. And 2 more followed in the next hour. Every day there are at least 2-3 shooting stars visible from Earth. However, the light pollution in the urban areas prevent us from spotting them. It takes less than a second for the star to disappear into the dark sky. One has to concentrate hard on the sky and keep one's eyes wide open in order to spot a shooting star. Let me tell you it is highly luck based and it is not easy to spot them.

A cool breeze occasionally broke the stark silence, the temperature was around 20-25 degree Celsius making it absolutely pleasant to lay down under the blanket of the stars. We played melodious music that was perfect for the moment. I would recommend Bonfire Heart by James Blunt, A sky full of stars by Coldplay, and any AR Rehman symphony.

This was a classic example how experience always precedes beautiful views. Stargazing gives you a feeling which is extremely complex to describe. I mean putting it in words would simply be impossible. According to me, stargazing is the best form of meditation one can ever do. All the issues of my life seemed to get untangled, all the decisions I had difficulties making seemed so simple now. Life began getting uncluttered and everything seemed simpler. Gradually the stars took over my mind as I slowly descended into sleep.

Camel cart in the day, Galactic Vehicle at night. 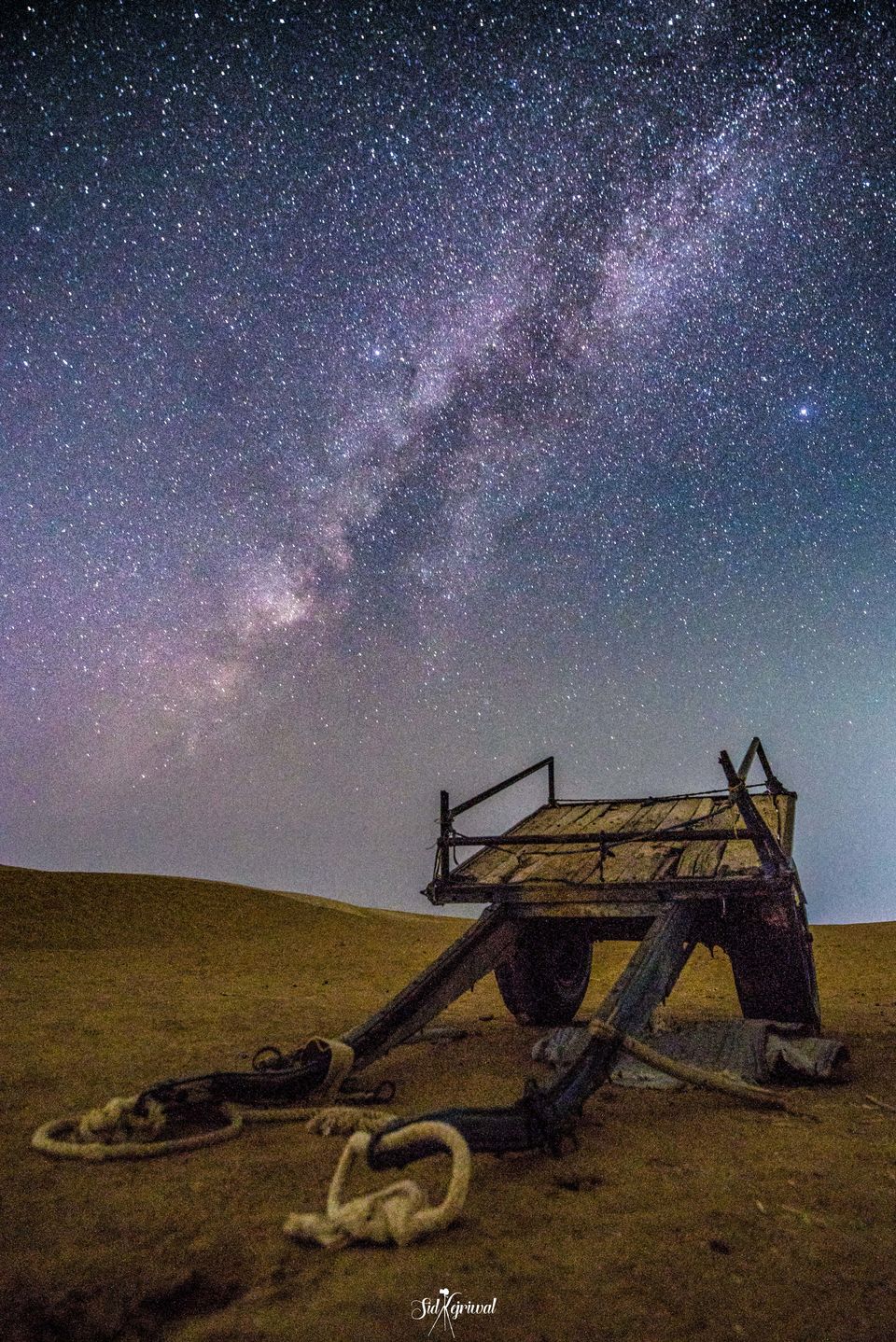 We got up in the morning and everything around us which was black last night suddenly turned into a bright Golden. I can safely assert that waking up facing the sunrise has given me the best morning of my life. Unfettered and free, with the land wide open, the desert soaked me in. 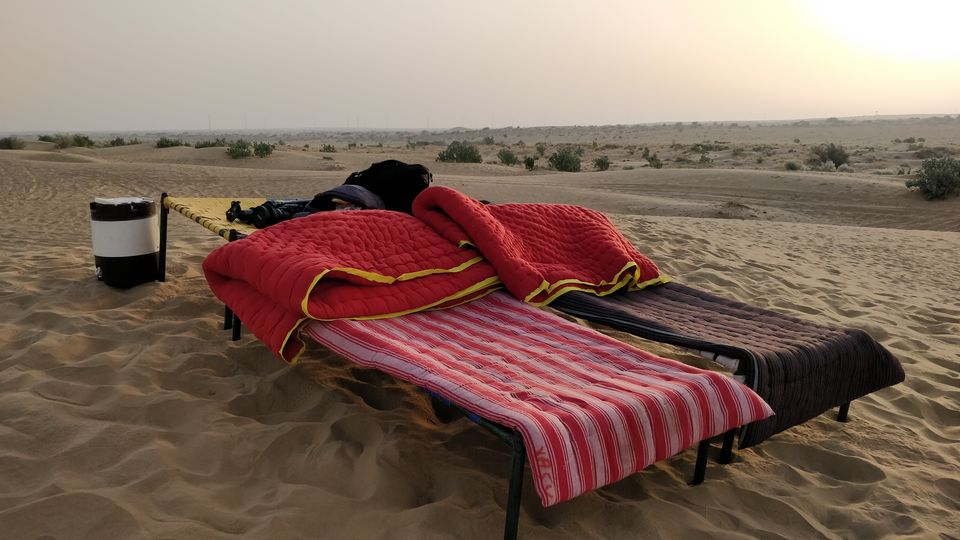 Desert which has traditionally been considered as a wasteland, a place where life does not thrive. This desert runs the economy of the entire city of Jaisalmer. This desert gives livelihood to thousands of villagers living in the Dhanis of Thar. Keeping the essence of history alive. Living the traditional life with pride and euphoria. 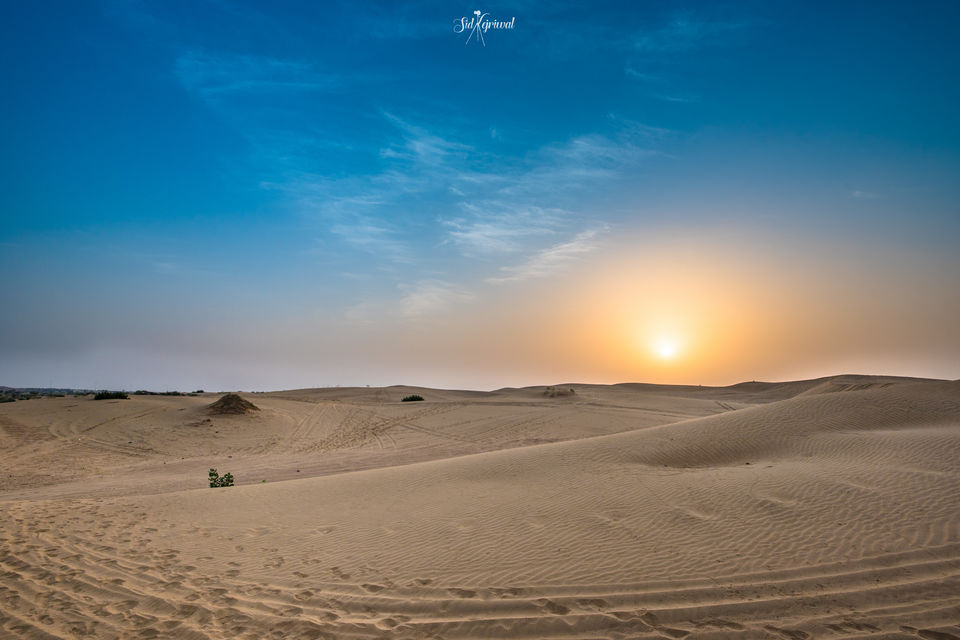 Visit the dunes at the sunset and stay the night in the heart of the desert. Make sure you arrange for food and a khaat (or even a sheet would do) to sleep on. You'd be accompanied by 1000s of stars at night. The most enthralling experience of your life awaits you here. Satiate your thirst of adventure in the desert and take back a memory of a lifetime. Take a road-trip from Jaipur or Jodhpur to the city of Jaisalmer for a surreal driving experience on the smooth roads of Rajasthan. I recommend you to book a camp in the dunes well in advance. Additionally, ask the camp owner if he/can arrange a night for you deep in the dunes instead of the camps near the road. Most of the camp owners are capable of doing that. Accordingly book your stay in the desert and take back a night you'll never forget in your life.

The tarmac of Rajasthan. 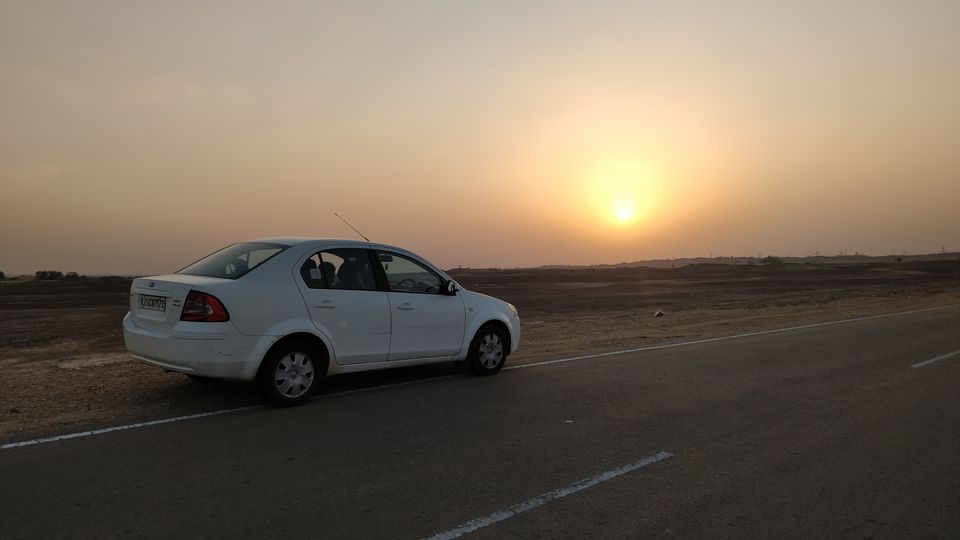 For the perfect date with the stars, make sure you choose a New Moon night or a night with the moon setting early at night or rising late in the morning. The presence of moon can restrict the visibility of the stars to some extent. The lesser the moon, the clearer are the stars. The perfect time of the year to visit this would be in the months of October-November as the temperature is ideal and its neither too hot nor too pleasant according to desert standards.

You can add the experience of a bonfire if you're doing this in the winters.

Ditch the day, rule the night. Thar desert is not a land, it is an experience.