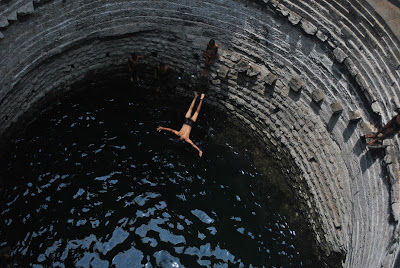 'Kings from Maharashtra were lazy' I announced one day.

'No exotic palaces, no gigantic forts, no step wells. Seems they lacked imagination' I continued.

'My dear child, do you know that most of the beautiful forts and palaces still preserved in good condition in India were because the local king decided to align with British East India Company rather than fighting for freedom ? That almost all forts built in Maharashtra were in constant state of war with invaders ?' explained my mother.

'Yes. And Maharashtra has always had good rainfalls. So I am sure that step wells were not a necessity for the locals then.' my wife Suchita joined in .

It would have been waste of resources. Why would there be a step well in..... ' suddenly she stopped talking.

I could see from her face that she was trying to recollect something.

'Unlesss....' she mumbled. Out came the smartphone. She typed in something and then smiled.

'Unless there is actually one step well in Maharashtra !!!!' She turned the screen towards me.

So we left on our search of this little heard step well of Maharashtra. Entered the destination as - Baramotichi Vihir on the all knowing Google Maps.

Baramotichi vihir is approximately 2 hours drive from Pune. History states that it was constructed between 1641 and 1646 by Virubhai Bhosale. This well was used to water the hundreds of different varieties of Mango trees which locals say were procured by Virubhai Bhosale. This well also served as secret meeting room. There were 12 pulleys (Baramoti) in operation hence the name.

So after 2 hours of continuous drive, we came to a road which seemed to be going to a dead end.

A bit anxious we tried to find people to ask direction but were not able to find any. Just as we were about to give up our search, we saw a signboard which signaled turning right towards Baramotichi Vihir.

We got down out of our car unsure of anything in vicinity. From the ground level, nothing except the periphery of a well is visible.

But as you move closer, a different picture comes up altogether. 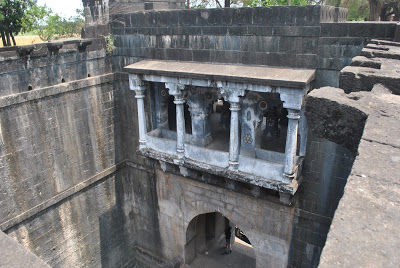 Wow !!! We thought. Tried googling the history but came up short.

Luckily, we met a local person who lives right besides the well. He happily guides and explains the well to visitors for a small fees as low as 100 to 200 Rs.

With a proper guide the beauty of the entire place comes alive. You get to know the history, the purpose of the well as well as some great photo places.

Our guide explained that the well was used to water the hundreds of different varieties of Mango trees which locals say were procured by Virubhai Bhosale.

This well also served as secret meeting room. The large door at the entry was meant to act as meeting space with villagers. The room on floor above was meant for secret meetings. 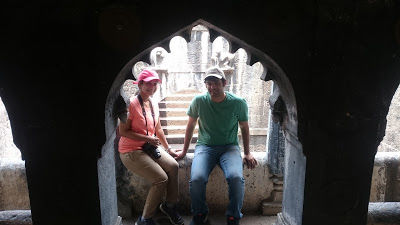 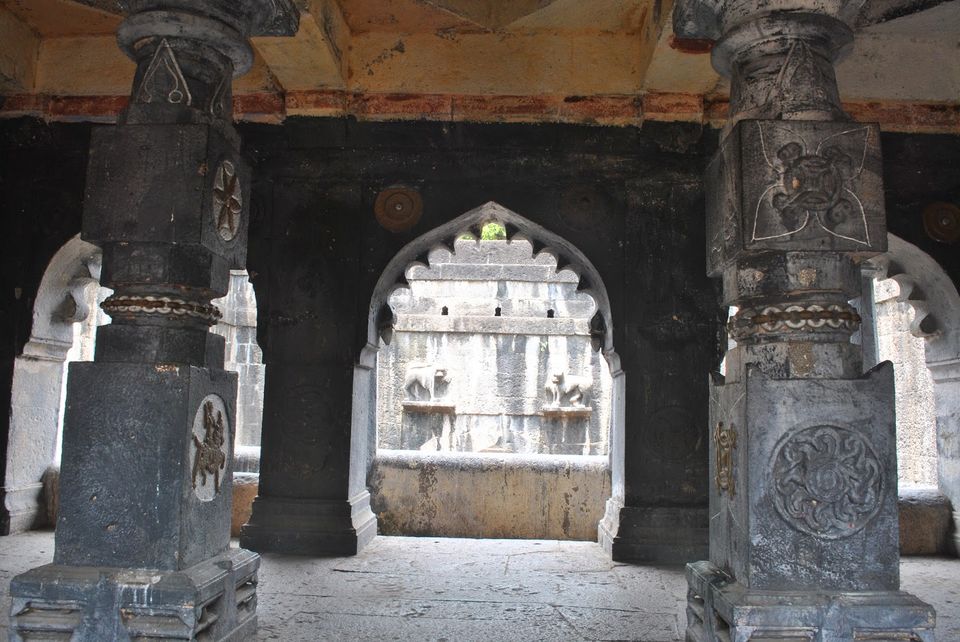 It is 110 ft deep and 50 ft in diameter.The well is octagonal in shape and looks like dug-out Shivling.

As the entire structure is hardly visible from ground level, it was very difficult for any possible attacking army to know the exact location of the place.

There are some intricate carvings which present some great clicks.

There are multiple exits from the chamber room for possible escape in case of attack.

We took a look inside and found that the water still looked fresh. 'There are still 3 active springs in this well providing fresh water' our guide told us.

Suchita meanwhile spotted some kids ready to take a dip and clicked one glorious pic.

After an hour exploring, we paid and thanked our guide for this wonderful short tour.

He thanked us, moved a bit ahead, turned back and said 'A good king spends more money on their people and not on palaces. Hence the history forgets but the hearts of locals always remember.'

I was shocked. This was the exact answer to the rant I had put up earlier in the morning at my place. It was like a ghost of Bhosale's army had given me a reply.

I looked up and expected Mr. Ravi to disappear in thin air. But instead he went to his cottage nearby and sat on his chair.

'Oh well... maybe next time I will have an end like some movie' I thought as I started my car for our return journey.

Do visit our travel blog- Alifeinslowmotion for other travel stories...