The Mehrangarh Fort of Jodhpur

Jodhpur known as the "Blue City" was the second destination after the "Pink City", Jaipur in our Rajasthan trip. Jodhpur was the capital of the Marwar kingdom and has beautiful forts and palaces which attracts visitors to this small yet beautiful city.

Late to begin late to reach... Jodhpur was the only place in the itinerary which fell completely out of plan and we reached too late. However, we managed to visit the Mehrangarh fort which was the best among all the forts I had ever visited and is my current favourite.

Mehrangarh fort is a magnificent and humongous fort built in the 15th century by Rao Jodha. Ostensibly standing 400 feet above the Jodhpur city, the fort has stood firm resisting fearsome battles to become the seat of power of the erstwhile Marwar kingdom. Even today, unlike other palaces and forts, this fort is not under the Government of India and is maintained by the royal family. Sitting atop an escarpment, the beauty of this fort is no less than any European castle. Guarded by massive walls, the grandeur of this palace is mesmerizing. Apart from being an architectural wonder, the fort is also a strategical masterpiece built to stand against the most destructive weaponry of its time. It has seven gates known as pols in the local language. The Dedh Kamgra Pol, still bears the dents caused by bombardment by cannonballs. 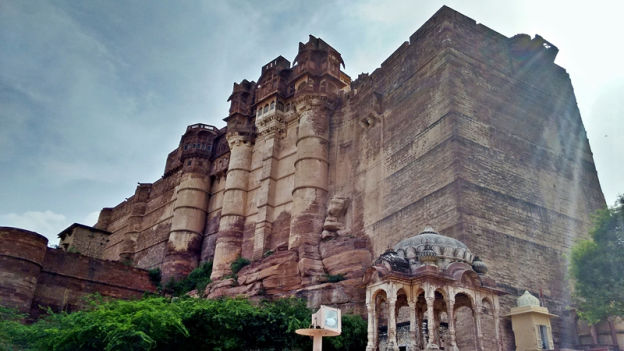 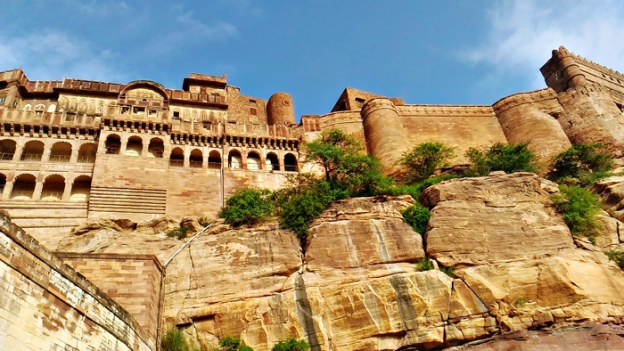 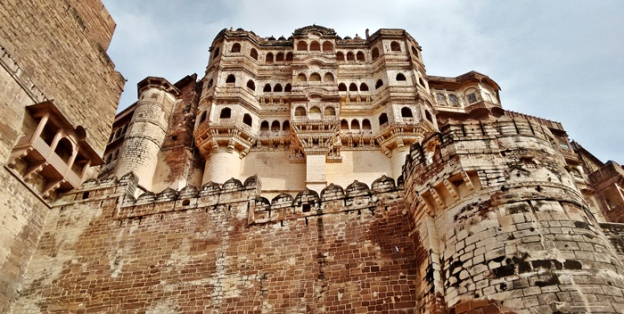 On entering, there is a ticket counter where tickets are available for the visitors. Guides are available as well. It is highly recommended to hire a guide at this place in order to understand various aspects of the fort as well as the museum. The guides here are very well trained and know a lot about the history of the palace and its architecture. There is a lift facility (Rs. 40 per person) which carries the visitors to the top where the museum is located. The visitors can then slowly descend through the stairs and ramp which is definitely easier than walking to the top. 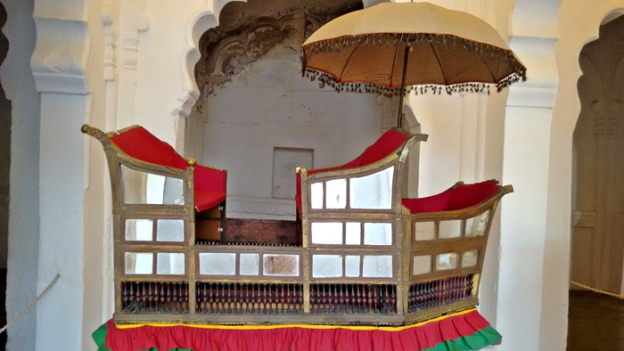 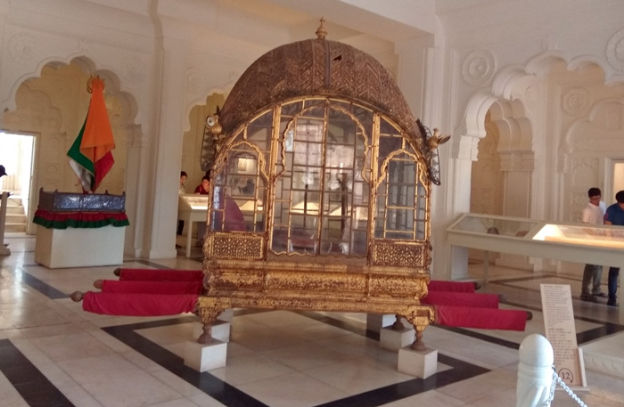 There is a beautiful collection of royal palanquins.

The most impressive part is the armoury gallery which has a exquisite collection of antique swords, armours, rifles, cannon balls, etc. There are sword hilts of jade, silver, rhino horn, ivory; there are shields made from camel skin and other more sophisticated ones studded with precious gems and pearls.There are guns with delicate gold and silver work on the barrels. The gallery also has on display the personal swords of many emperors like that of Rao Jodha, Akbar the Great and Timur. Most of the swords were used for ceremonial purposes while a few of them were used during wartime. There is another fabulous gallery of miniature paintings from the Marwar painting school. 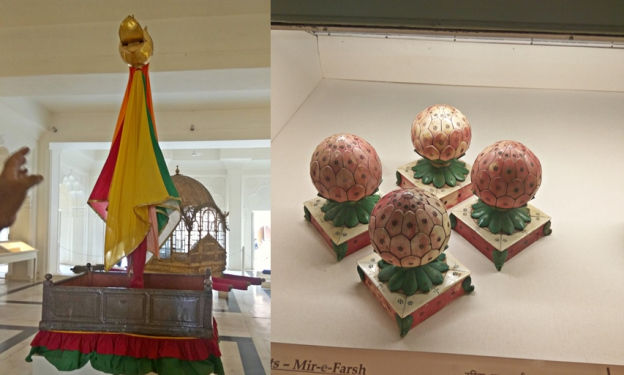 There is a cradle gallery , exhibiting the cradles of infant princes. There is one gifted to the royal family by the JDA which is an electric cradle.

The most notable feature of the Mehrangarh fort is the delicate carvings and stone scroll work on the windows. There are interconnected, stone latticed courtyards and halls which are magnificently built both architecturally and strategically. The upper floors are part of the Jhanki Mahal (Glimpse Palace) where the royal ladies could view the courtyard from behind the lattice walls. The lattice walls also ensured that there was a proper circulation of cool breeze to ventilate the rooms and provide relief from the scorching heat of Rajasthan. 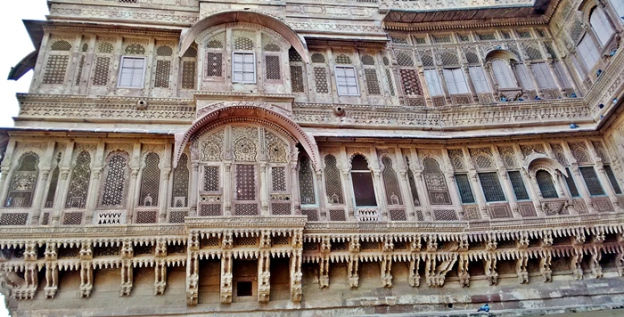 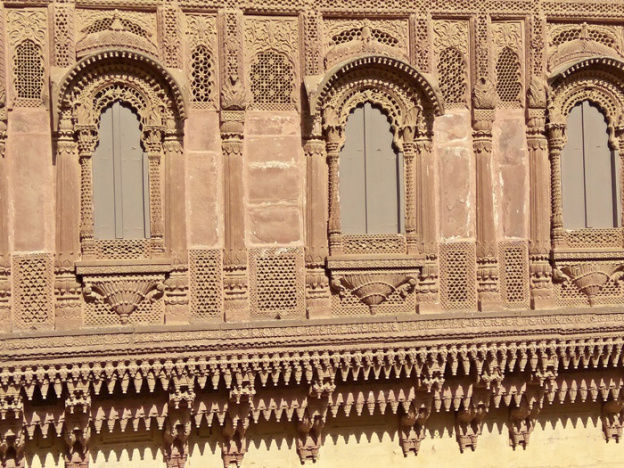 There are various private as well as public audience chambers within the fort. There is the royal durbar and various meeting halls; the Moti Mahal (Pearl Palace), which was the fort's main durbar (royal reception hall) for official meetings and receptions has beauteous colourful glass. But the most striking is the bed chambers of the kings which are embellished with intricate craftsmanship on the walls and the ceilings. The seesh mahal stands out among the rest. It offers a brilliant dazzle produced by the mirrors fragments in its walls and the ceiling. 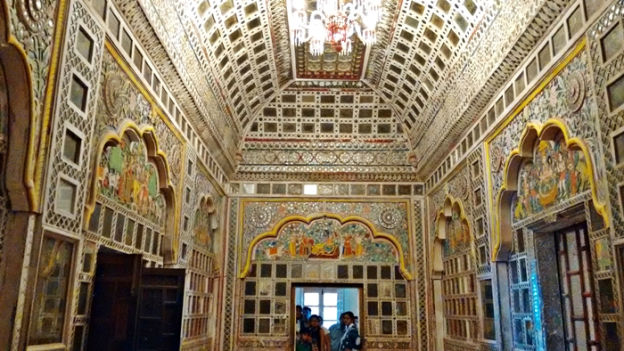 Another wonderful section is the Phool Mahal, built by Maharaja Abhaya Singh, which as the guide informed was the private pleasure chamber of the king. Its ceiling and the ornate pillars are embellished with opulent filigree of gold. 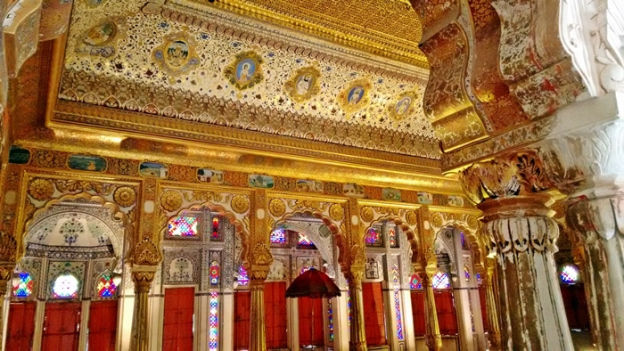 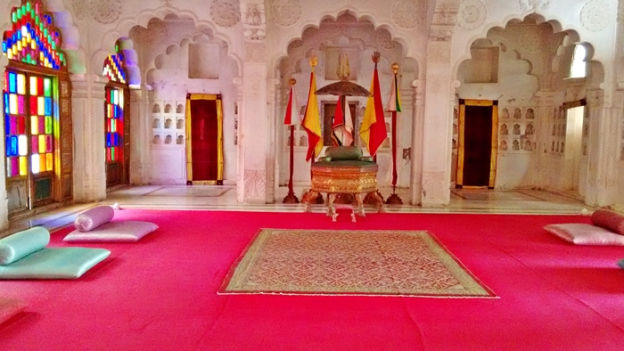 From the fort you get a bird's eye view of the entire Jodhpur city. When you look outside from the windows in a part of the fort, you get to know why Jodhpur is known as the "Blue City". In ancient times, the Brahmins used to paint their houses with blue colour to affirm their preeminence in the society. At present anyone can paint their house with blue colour and the residents of Jodhpur have adhered to the colour code to ensure that the sobriquet of "Blue City" remains intact. 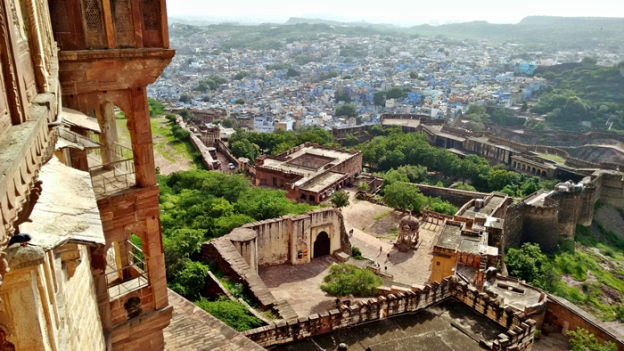 Then there is the Takht Vilas which was the bedchamber of Maharaja Takht Singh who as our guide informed had 30 queens and numerous concubines. Its beautiful ceiling is covered decorated with Christmas baubles and the walls are embellished with fine stone inlay work. There is a setup hanging from the ceiling which as the guide described was used as a fan which was manually revolved by the servants in a chamber right above the bed chamber. 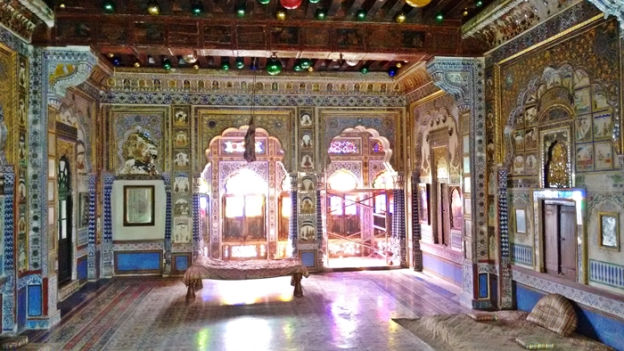 There are musicians along the path playing traditional instruments and singing folk songs.There is a souvenir shop and a small cafe as well. We didn't venture into them so can`t comment on it.

Apart form the Mehrangarh fort, there are few other points of attraction in Jodhpur, the prime one being the Umaid Bhawan Palace which is the current residence of the royal family. It has a museum open to the public between 9 AM - 5 PM. We missed the Umaid Bhawan Plaace which undoubtedly is one of the most beautiful palaces in the country. The other notable places are Jaswant Thada and the Clock Tower (locally known as Ghanta Ghar). Owing to our delay in reaching Jodhpur, we could only see Jaswant Thada from outside. There is nothing much to see there either as it is just the cremation place of the royal family. For adventure lovers there is a Zipline managed by an Australian company.

We spent our evening in the Sardar market, which is a bustling market in the middle of the city. Its a good place to buy some traditional items like Rajasthani jewelries and textiles, handicraft items, marble inlay works,etc. The Clock tower constructed by Sardar Singh is also located there. 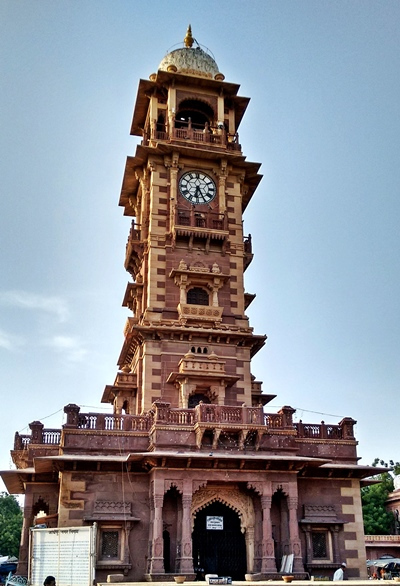 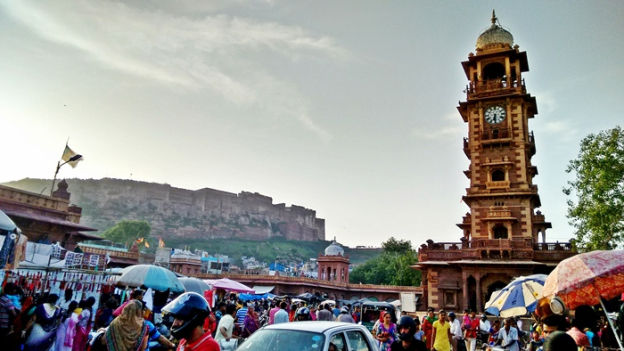 Overall Jodhpur is a place for history, culture, shopping, nature and adventure; probably it can cater to the demands of all types of visitors. When we planned our Rajasthan trip, initially it only included Jaipur and Udaipur but I must say by not visiting Jodhpur, Rajasthan trip would have been incomplete. Missing out on the beautiful Umaid Bhawan Palace will forever remain a regret. May be one day I will revisit Jodhpur to see that.. Until then I will treasure the memories of the wonderful Mehrangarh Fort - undoubtedly the most beautiful fort I had ever visited. If you happen to visit there as well or have been there please share your reviews in the comments section below. Travel and spread Love..❤

This blog was originally published on 'SOUL ESPLANADE'