The Escape Route Trek; Exploring the wilderness of Western Ghats

Hitched a ride on a horseback from Kilavarai to Kadavari Village 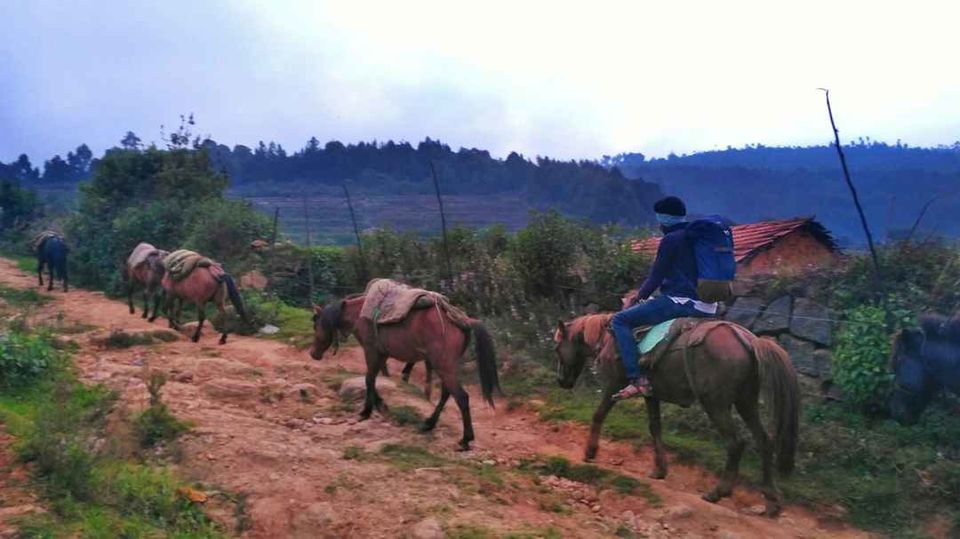 I had been hearing about this somewhat secret route for a long time and recently an opportunity came knocking at my door and I dived right in. The so-called escape route is the trail that connects the remote villages between Kodaikanal and Munnar across the border between Kerala and Tamil Nadu. This travels from Top station all the way to the Berijam Lake near Kodaikanal. The route we took, however, is a trade route between the two hill-towns of Koviloor and Kilavarai. It is used by the people who inhabit these villages, mainly for carrying their agricultural produce. The vegetables see fluctuating prices across Kerala and Tamil Nadu. This trail acts as a savior as it allows farmers to sell their goods in the State where they get paid better. 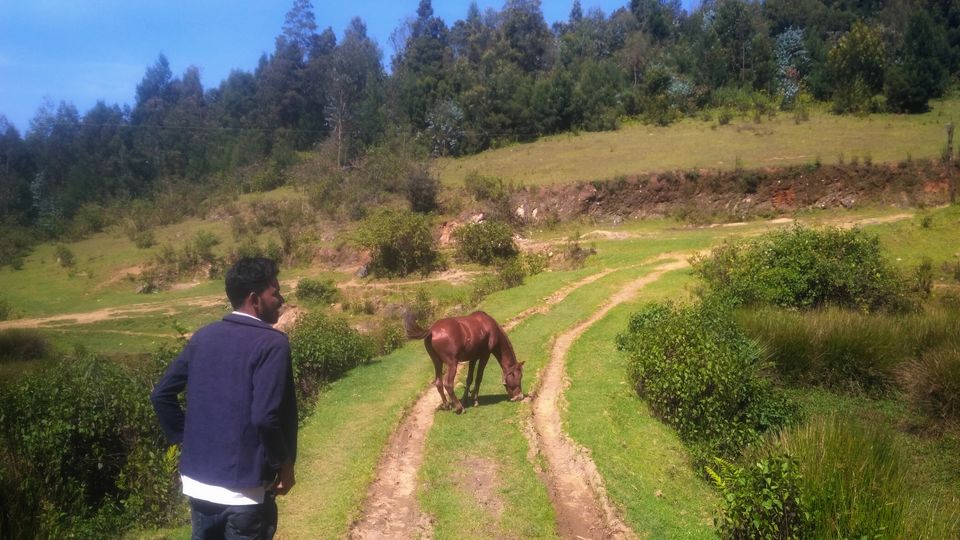 We happened to visit Poondi village where we stayed for a couple of days. We were preparing to leave and when we thought about it, the escape route would save us a round trip of about 100 Kilometers. So we decided to hit the trails. We started really late as always. It was close to sundown when we hopped on top of a minibus that plies between Kodaikanal and Kilavarai village which is where the road on Tamil Nadu side ends.

The beautiful terrace farms of Kodaikanal and Munnar 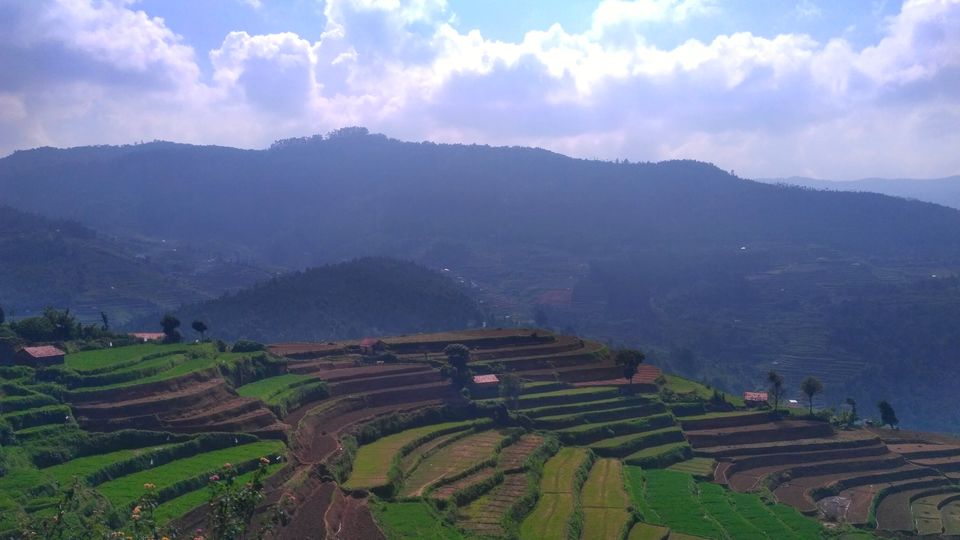 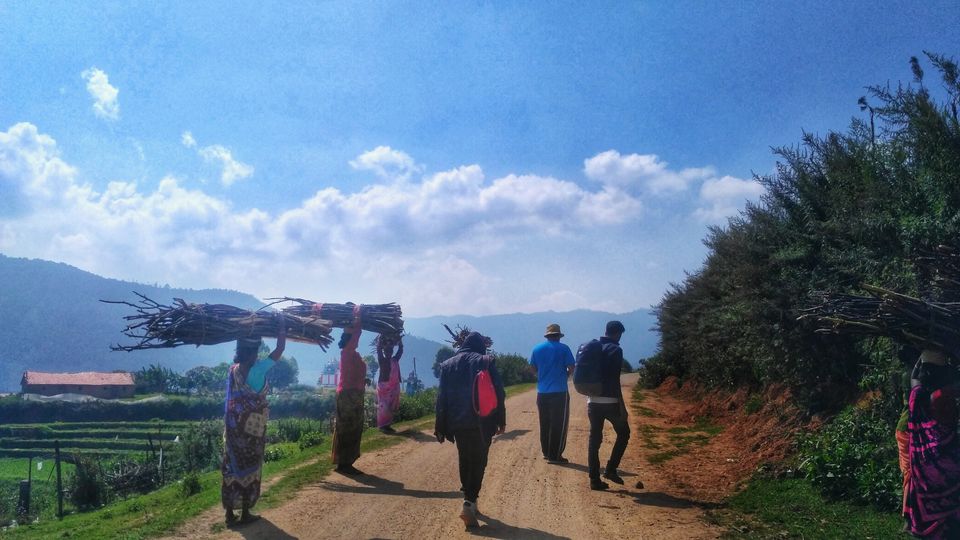 The first task was to figure out the route to Koviloor village. So we asked the first person that felt right. Call it an absolute stroke of good fortune, the guy was leading a group of horses back to Kadavari village which lies along our route. They agreed to show us the way as they were also headed in the same direction. They seemed reluctant to let us follow because firstly it was getting dark. Secondly, the trail was not meant for newbies especially at night. So, they took us with them along a dirt road which slowly started ascending. After a while, they stopped the horses and asked both of us to hop on. We both did and so did they. We started a slow bumpy ascend on these horses. It was a lot of fun and an unexpected lift. The thrill, however, almost killed me. The horse I was riding had some sort of problem with another horse in the group. They were making weird noises whenever they got close. As they got a chance to face off, my horse went up on two feet, standing in the air. Its head missed my retreating face by inches. If I was hit, I'd have been knocked out cold for sure.

After this incident, our annas were carefully guiding these guys away from each other. And we continued along sky-high eucalyptus plantations. They showed us the foot-wide forest path that would take us to Koviloor but they did not allow us to stop even after our pleas. It became pitch dark in a matter of minutes and our annas guided the horses by specific cries. My horse and his opponent faced off a couple of times in the darkness to add to the terror. Finally, our annas decided to ride between the fighting horses. After about 30-40 minutes, it became even darker and we arrived at a small junction in the forest. 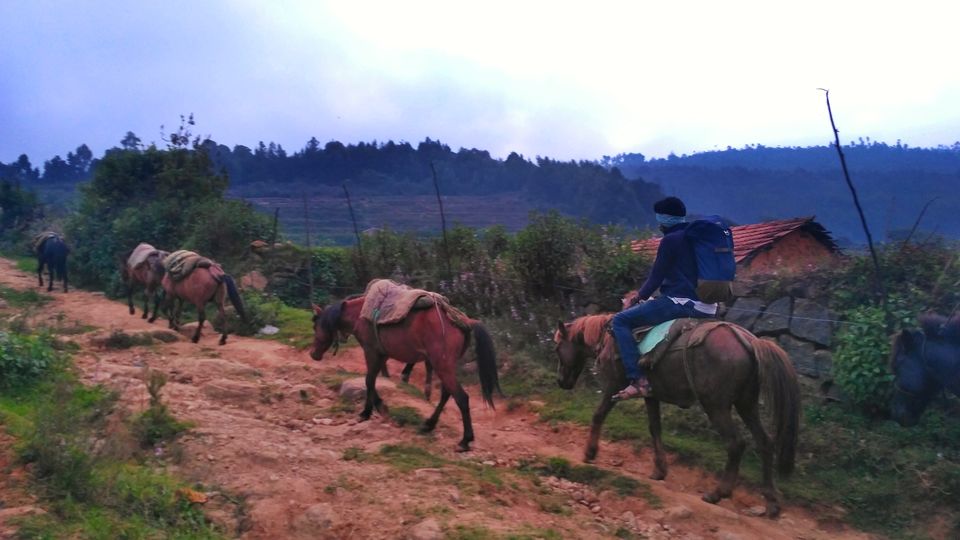 Annas informed us that they were taking a different route to the stables and that we had to take the road that laid ahead. They also gave us a few landmarks of a house that fell on the route. They told us that we'd definitely get help if you reach there, and we eagerly noted down the names. And we were on our own. That was when the intensity of the wilderness really struck us. Not a light to be seen apart from a few stars, and a chilly wind was gushing past us. We started walking. The road was alright and we continued with the torches at first. However, the battery of both our phones were less than 10%. So we continued without any light and soon our eyes grew accustomed to the darkness. We walked and walked.

For more than an hour we walked but then we started feeling really tired. The place mentioned by annas was still not to be seen. Finally, we reached a temple and a stream with biting cold water which was the landmarks that they told us. After a few minutes, we saw a house with lights on. But the fences were all electrified. We walked further and found a faulty link in the fence through which we crept in. We walked up towards the house but there were a quick drop and a stream blocking our path. So we returned to the road and decided to walk a little more. Then we found a house on a nearby hill with lights on and we decided to climb up to ask them about the house. It was a short climb and we were glad to see a family there. They scolded us for venturing out in the dark but they finally led us to Bheema Anna's home which we tried to reach earlier. I sat down and introduced ourselves before I collapsed on the bed for a long time. Finally, Jeevan shook me awake when the dinner was ready. I ate my heart out. The rice and the lady's fingers were finished in no time. The cold was biting, and we set up our tents outside. I lied with my whole body covered and just my head outside the tent. The sky was breathtaking that night. I listened to the stories of the stars before I fell asleep.

We woke up to an insanely cold morning. We just stood there shivering and watching the sun paint the valley anew. 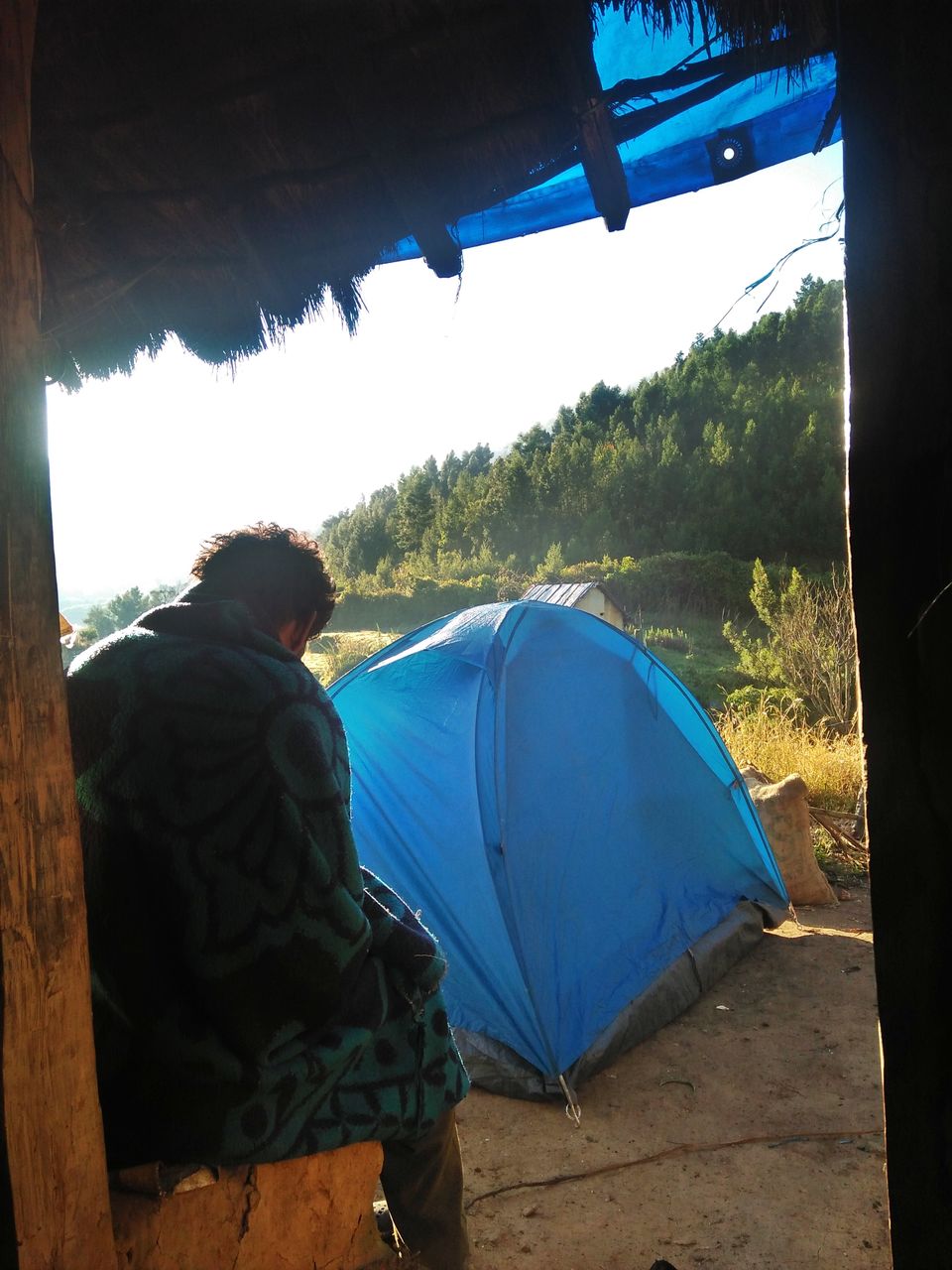 All the plants were slowly being awakened as the light seeped through the gap in the mountains and touched them one after the other. The sun-bathed vegetation and the treeline behind were an absolute treat to the eyes. We stood there for a long time watching the farmers become ant-sized in the carrot farms long below us. 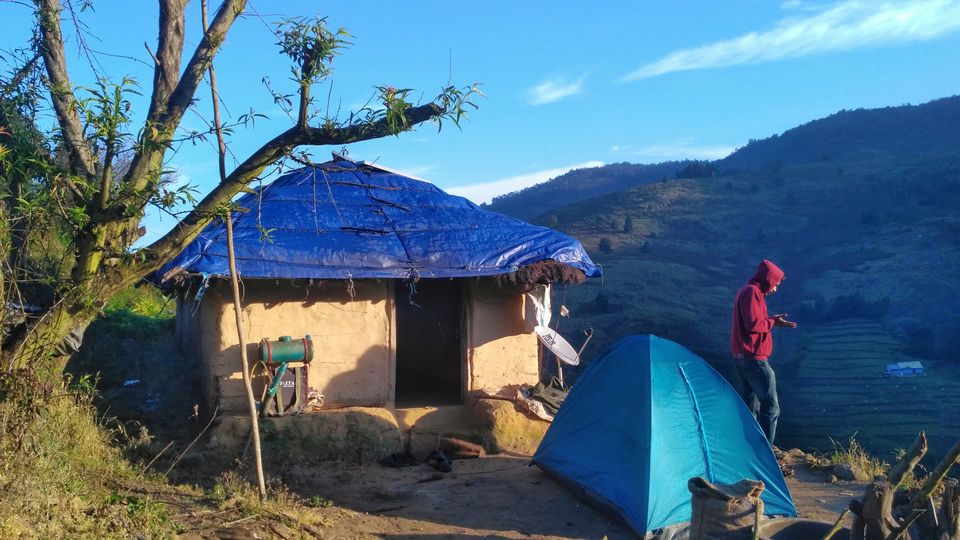 Bheema anna was one among them, picking fresh carrots. We were treated with a delicious black tea, and we shared our breakfast with the other Anna. We had some biscuits and bun which was supposed to get us to Koviloor. We asked them for some carrots. He gave us a sack full of freshly plucked carrots. One bite and all the freshness burst inside our mouths. It was juicy and delicious. We were given the whole sack to take home and we started washing it thoroughly. We packed everything and bid farewell to our annas. The trail greeted us with vibrant blue skies and some fresh streams. The route led us up and out of Kadavari village. Soon we were the only living souls around the place and the wilderness resumed its beautiful orchestra of cries. The route was beautiful and luckily there were streams at regular intervals. We got fresh and did our daily exercise nearby one of them.

Walk through the wilderness;Kodaikanal to Munnar cross over 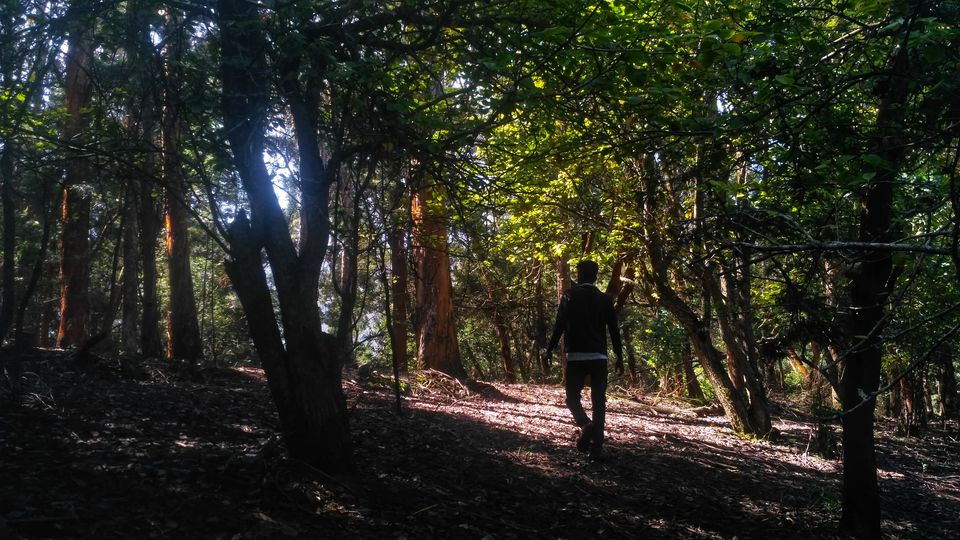 Then, a beautiful vista opened in front of us. The mountains were spread out beneath our levels for a long distance. We got up and started walking again. We reached a really high point with lower grounds on both sides. On the next side, I was able to spot some villages which I knew were in Kerala. It was a long path that rounded the highest point of the nearby mountains. And it was unexposed. So I could see for a long distance on the path. I was walking in front and once I spotted the villages, I stopped to look at them and waited to show him the view. I waited for 5,10,15 minutes and no one came. So I decided to take a look at what he was doing on this sunny trail. But the trail was deserted. I started walking further back to see if he was near that waterfall still. There was no one there after I walked up. I started to get a little worried. I yelled his name so many times in all directions around the mountains. Still, no reply came. Now I got really panicked. Crazy scenarios started running in my mind. I was heartbroken because I had no idea where he went. I ran far ahead of where I was standing and again back to the initial waterfall like a madman. I had no clue where to look, whether to go back and inform someone about this or to get help from Kerala which I had no clue of how far it was from there. As a last resort, I kept shouting his name over and over again. Finally, I heard a distant voice. It was him, from a long way ahead. I cannot explain how much relieved I was. I went up to him and he told me he'd got lost in the bushes trying to figure out some shortcut. Crazy as it gets. Anyway, after that scare, we started a descent that would last till our destination. The route was scenic with sky-high trees all the way. 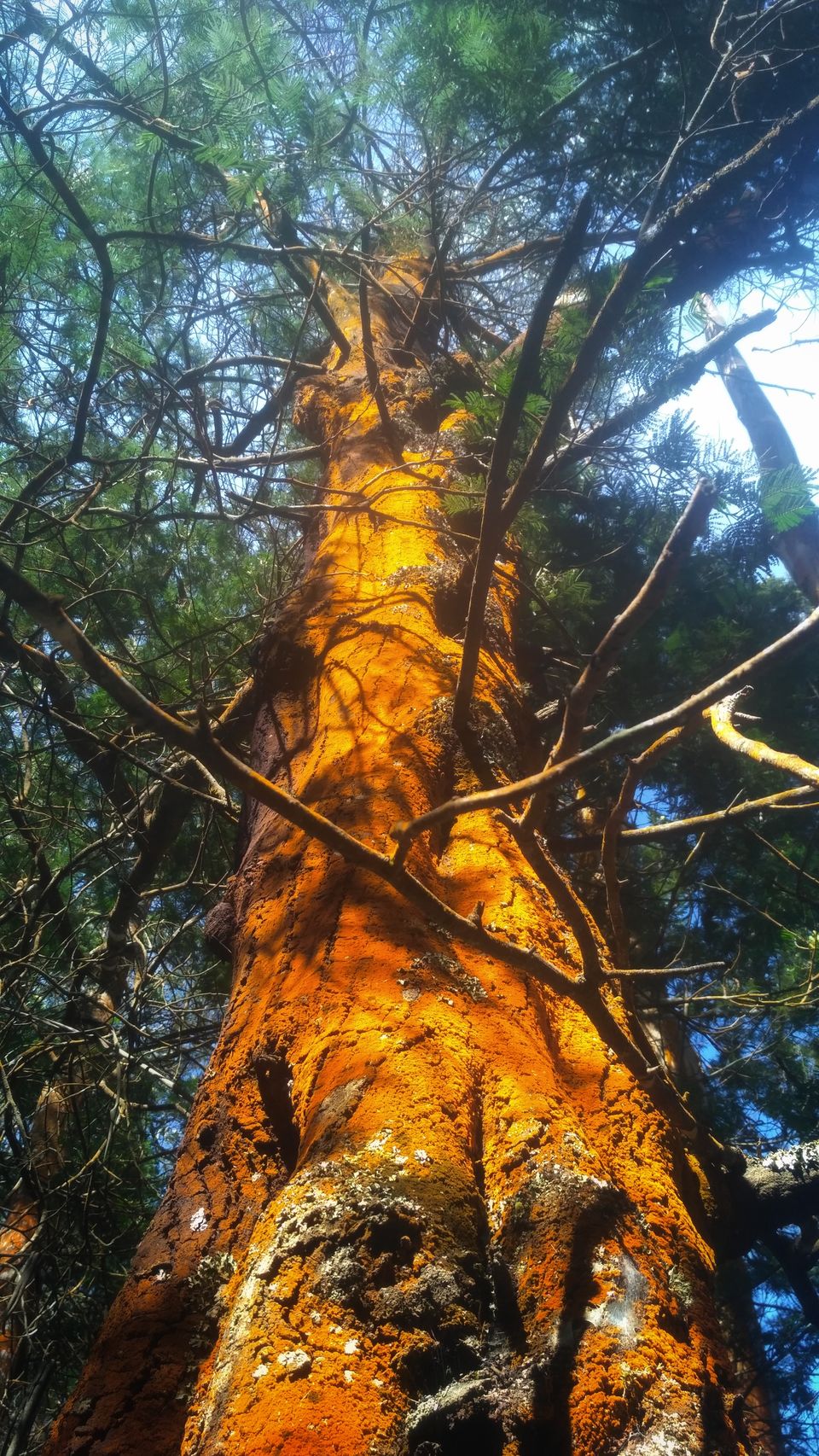 It was perfect for some complete immersion as we spent some time laying on a fallen tree and just listening and observing the whole scene. It was refreshing indeed. After another hour and a half, we reached Kottakkambur village. We found a shared taxi and reached Koviloor for the next session of penniless waiting... Here's to a beautiful experience of Mother Nature...

PS. -on a serious note, it is illegal for anyone outside the eight villages of the Region namely Mannavanur, Poombarai, Kavunji, Poondi, Kilavarai, Kadavari, Kottakkambur, and Koviloor to cross the inter-state border on foot. Do it at your own risk!