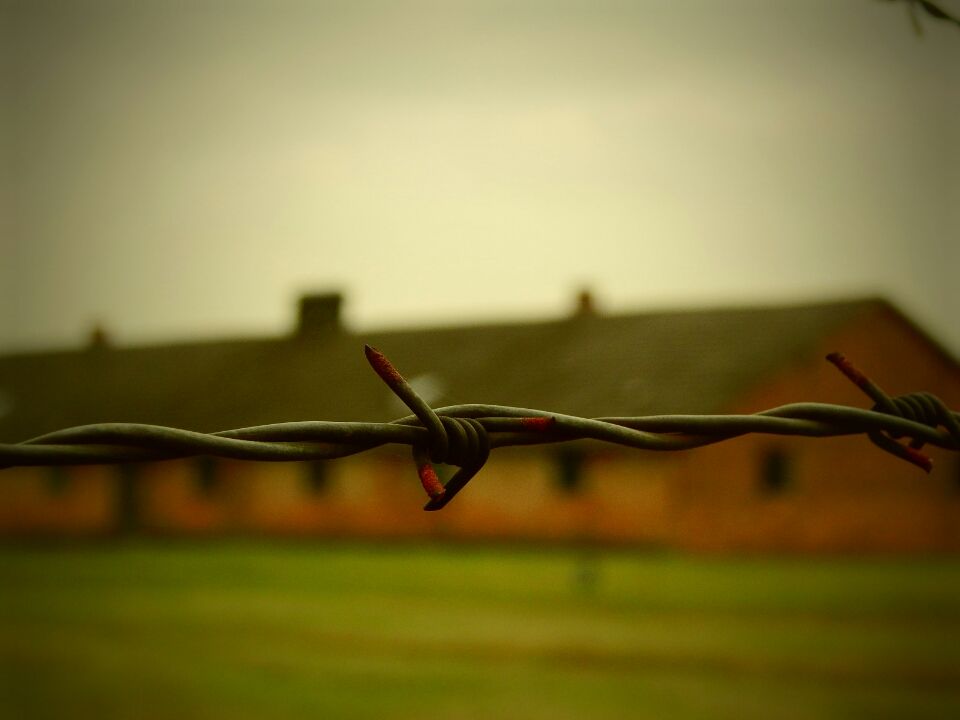 Sometimes its painful to turn the pages of history, as they are often drenched in innocent blood but a wise man once said, "Those who do not remember the past are condemned to repeat it".

While planning our trip to Poland, we just knew that we had to include a visit to Auschwitz-Birkenau in our itinerary. This was the largest of over 50 Nazi concentration camps in Europe and was majorly used for mass extermination of Jews.

It serves as a mirror that reminds you how evil mankind can be to itself and maybe teaches an important lesson of humanity and compassion.

Oswiecim (the Polish name for Auschwitz) is about 1.5 hours away from Krakow. There is a bus every 1 hour from the main Bus Station. There are frequent trains as well but from Oswiecim train station you would have to take a bus to the camps whereas the bus from Krakow drops you right at the entrance gate of the memorial. The scenic bus journey which costs 28 Zloty takes you through the Polish countryside with vast fields and grasslands.

Entry to the grounds of Auschwitz-Birkenau is free of charge but we decided to take a guided tour. This 4 hour tour costs about 45 Zloty and is conducted by the museum's excellent guides. I would highly recommend on taking this tour as its quite informative.

Please note that all you can carry inside are small backpacks or handbags as they have a size restriction. But you can easily keep your oversized baggage at their luggage storage for 3 Zloty.

Also please remember to follow the rules of not drinking or eating inside the memorial. Taking photos is allowed in all sections except a few which are clearly marked or are announced by the guides.

Most of us have read about the Holocaust in history books or came across Hitler's plan for a "world free of Jews" in films and documentaries. But being there, listening to uncountable stories about the dehumanization of inmates and the mass genocide just breaks your heart.

We met our guide at the main gate of the concentration camp. This gate is probably one of the most photographed parts of the memorial. Dawning the German words "ARBEIT MACHT FREI" which means "Work Shall Set You Free", this iconic gate served as an entrance to Hell. It was a message to the inmates of the camp that they could earn their freedom if and only if they worked as instructed by the SS commandants.

Hitler and the Nazi party deceived the incoming prisoners and the outside world about the actual conditions in the camp by making false feel-good films of how the inmates socialized and enjoyed their lives there. In fact, they were asked to come to the camps with all their belongings and were ensured that they would be able to live their normal lives in a much better place as compared to the crowded Jewish ghettos in various European cities. So they came with bags full of belongings and memories, hoping for a new and a better life promised to them, often with smiles on their faces, as photographed in the pictures showcased at the memorial. Entire families came hoping to start afresh but were broken apart ruthlessly for an evil cause. They were robbed of their belongings, family, humanness and eventually their life.

The journey to Auschwitz from different parts of Europe or from other concentration camps was a torturous one. Thousands were stuffed into a single rail compartment and left to rot. Many of them could not take the hardships of the long strenuous journey without food and water and died while on their way. Those who made it, were met by Nazi doctors at the railway platforms, for selection, when they arrived. Here they were sorted into two groups. Those in the first one were thought to be healthy enough to be employed as slaves and had to work long hours without food, water, and proper living conditions. Those deemed unfit and useless for work were straightaway directed to the gas chambers. It was here that families were separated, women and children on one side and men on the other. They were ensured that they would reunite later and live together but that was the last they saw of each other. Hitler wanted to purify the Fatherland of any Jews and was determined to wipe out their race from the face of this Earth. Apart from Jews, there were also many others from Europe in his hit list as he somehow believed that the German race was superior and wanted to get rid of all others.

At the different blocks in Auschwitz, there were rooms full of people's belongings like utensils, brushes, shoes, bags etc. These articles and the pictures of inmates in those infamous striped pyjamas, showcased in the corridors, make you realise the sheer amount of people trapped in this hell hole. There was also one entire room full of human hair, which most of the times was removed from corpses, and was sold to the textile industries in Germany.

Walking around the camp we also discussed the daily routine, diet and life of those who stayed in the camps. For them, death was slow and painful as they were subjected to excessive labour and sometimes even experimentation or torture. As we reached the end of the camp and walked close to the electric fence, our guide told that plunging into one was the most popular choice of suicide and many inmates resorted to this drastic measure to end their misery.

Next we headed to Birkenau which is a 10 minute bus ride away. The museum runs a shuttle bus between Auschwitz and Birkenau every 10 minutes. This was a bigger camp with larger gas chambers for quicker solutions. There were hundreds of blocks here as well and ironically were mostly built by the healthy prisoners of Auschwitz and Birkenau. Here we also saw the railway track, the platform where the selection took place and the eventual road to death. One original compartment used for transportation of prisoners from all around Europe to the gas chambers is also kept on display on the railway tracks.

The most heartbreaking part was to listen to stories of how millions were driven to the gas chambers. In the first hall, they were all asked to undress and, as a false hope to scared minds, were asked to remember where they left their clothes so that they could collect them after getting through with the "shower". They were then packed and sealed inside the huge gas chambers which could contain up to 3000 people at a time and were killed using the poisonous gas Zyklon B. Later the corpses were burnt in ovens by the Sonderkommandos, the working prisoners, and the ashes were spread across fields as manure or in ponds to remove evidence.

At the end, we saw the ruins of the huge gas chambers at Birkenau which were destroyed by the Germans to leave no proof of the genocide. The camps were liberated by the Russian army in 1945.

Now a memorial stands at this same place to honour and remember the millions who lost their lives here.

Overall it was a tough day for us, to come face-to-face with this kind of inhumanity and no amount of movies or books on this subject could prepare us for what we experienced there.

To realise that intricately planned and heartlessly executed mass murder of over a million people took place at Auschwitz-Birkenau just about 71 years ago is as bizarre as it is horrifying. Because if something's happened once there's absolutely no reason to believe that it can't happen again.