A view of Iskar Lake 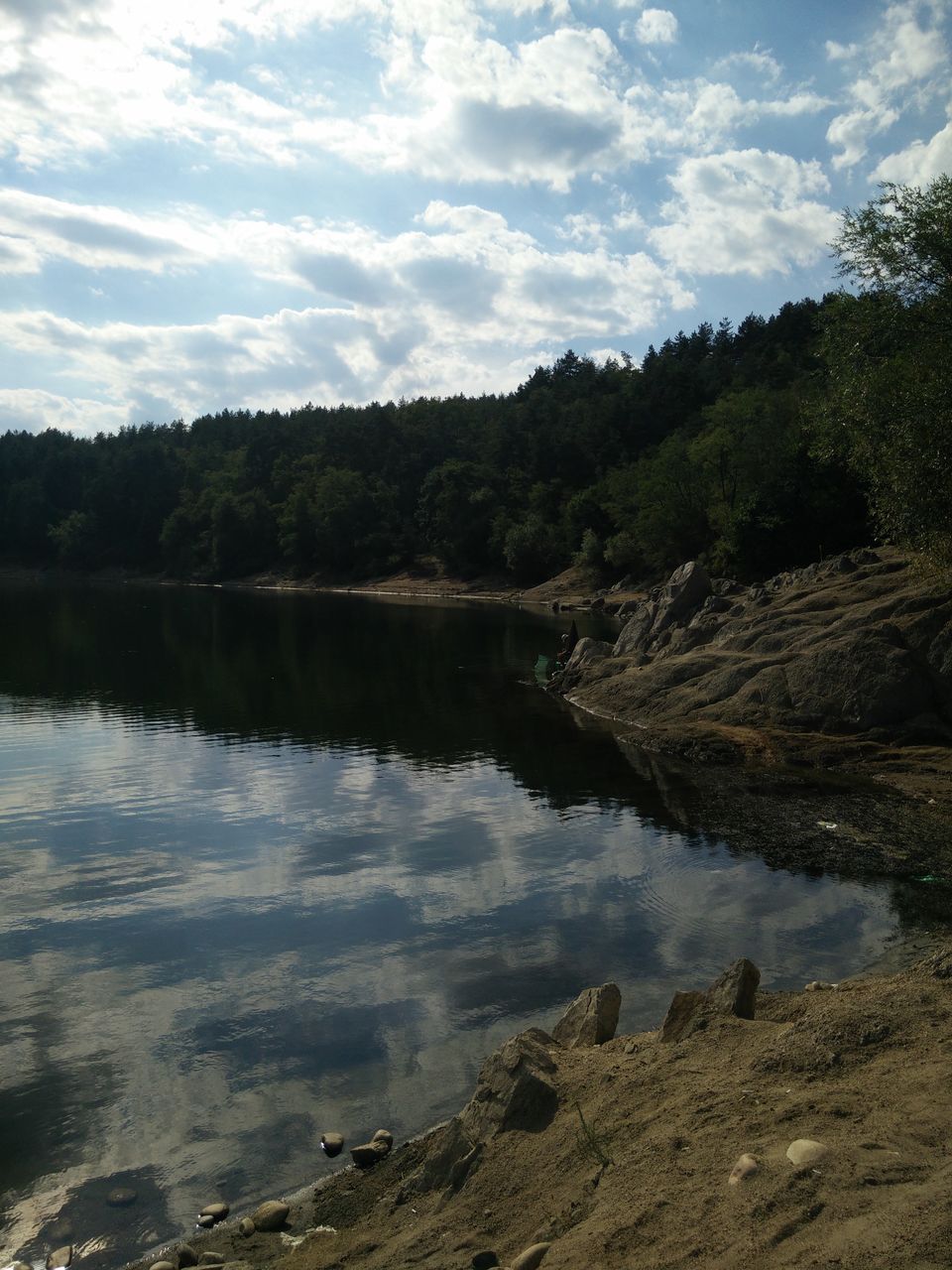 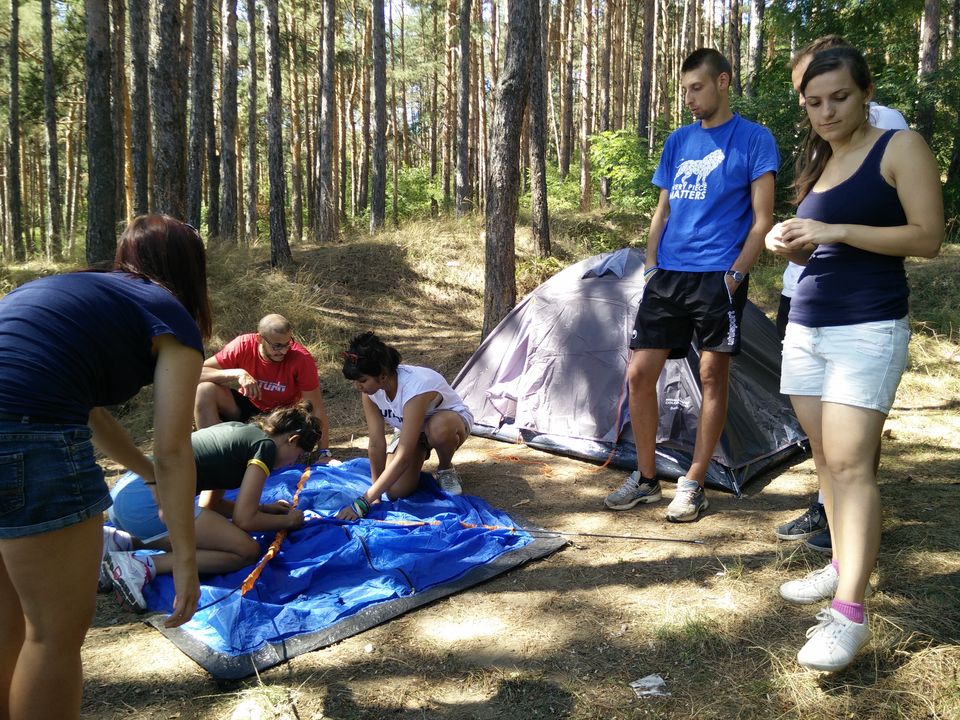 Team in the lake 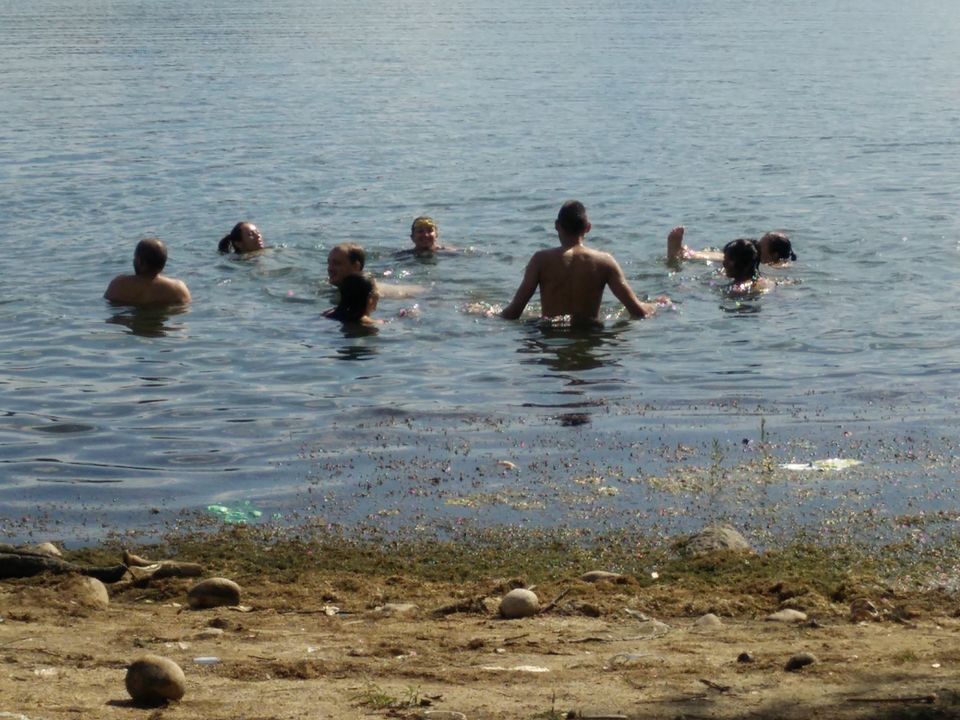 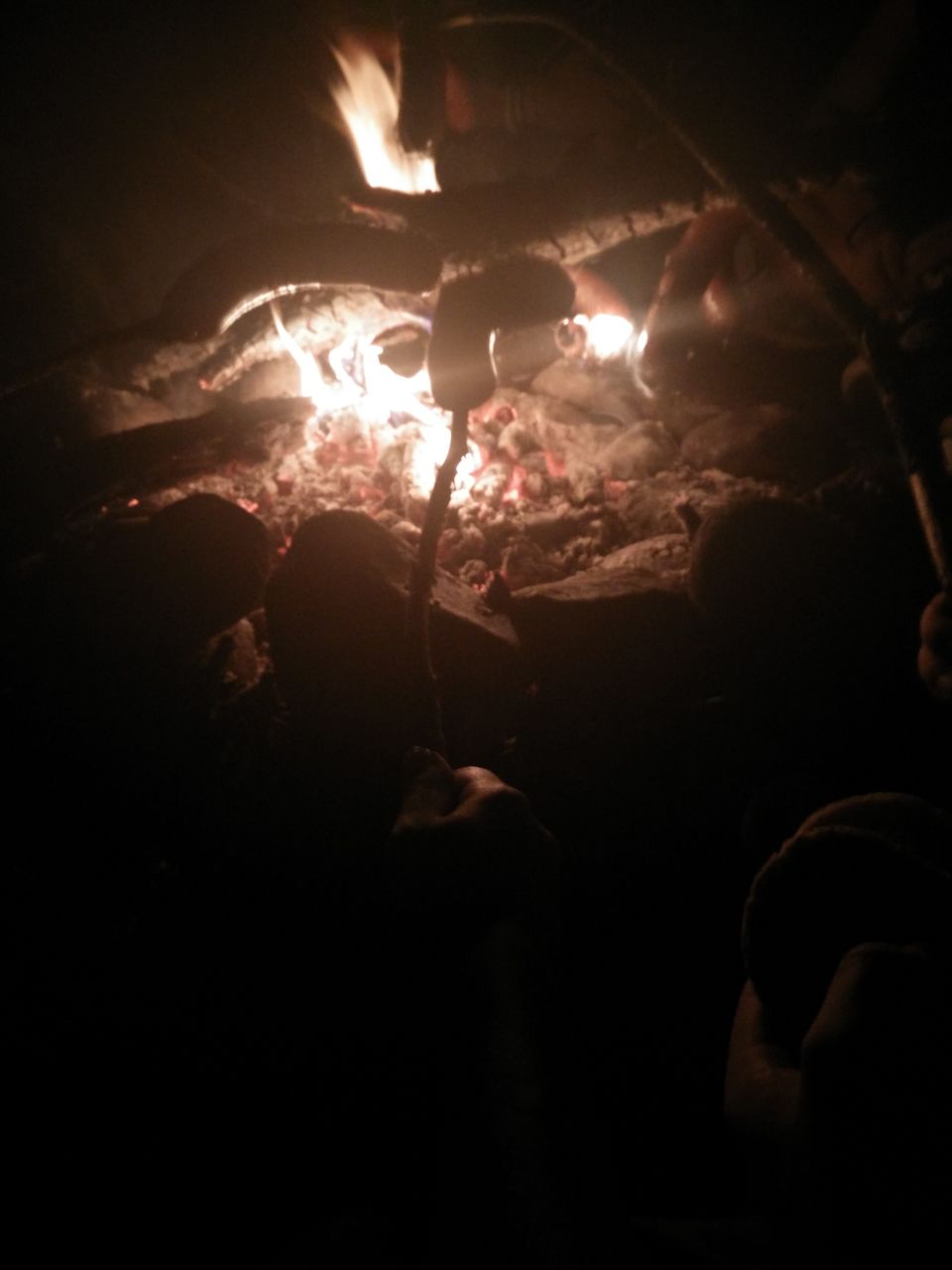 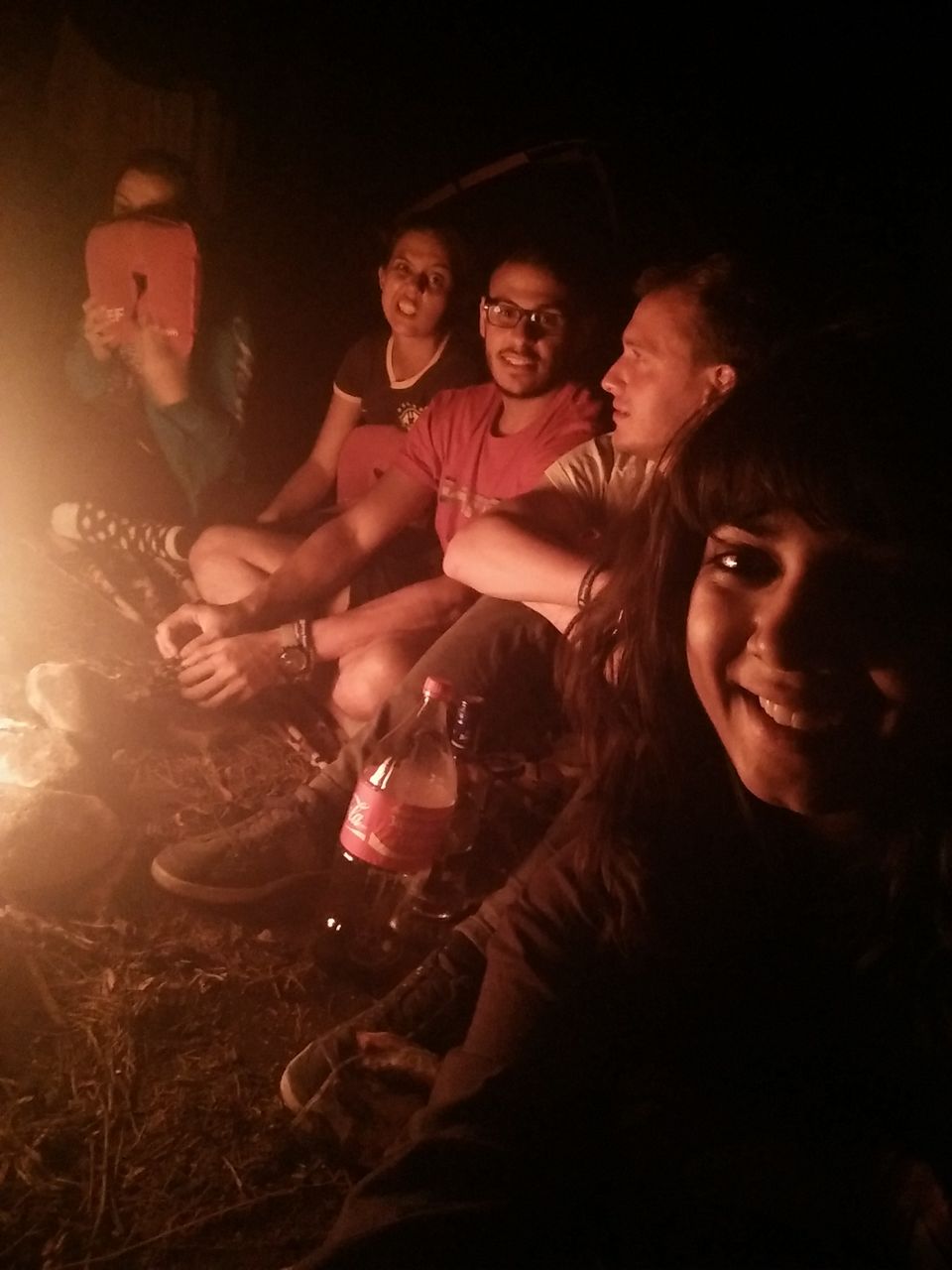 Freezing mornings by the lake 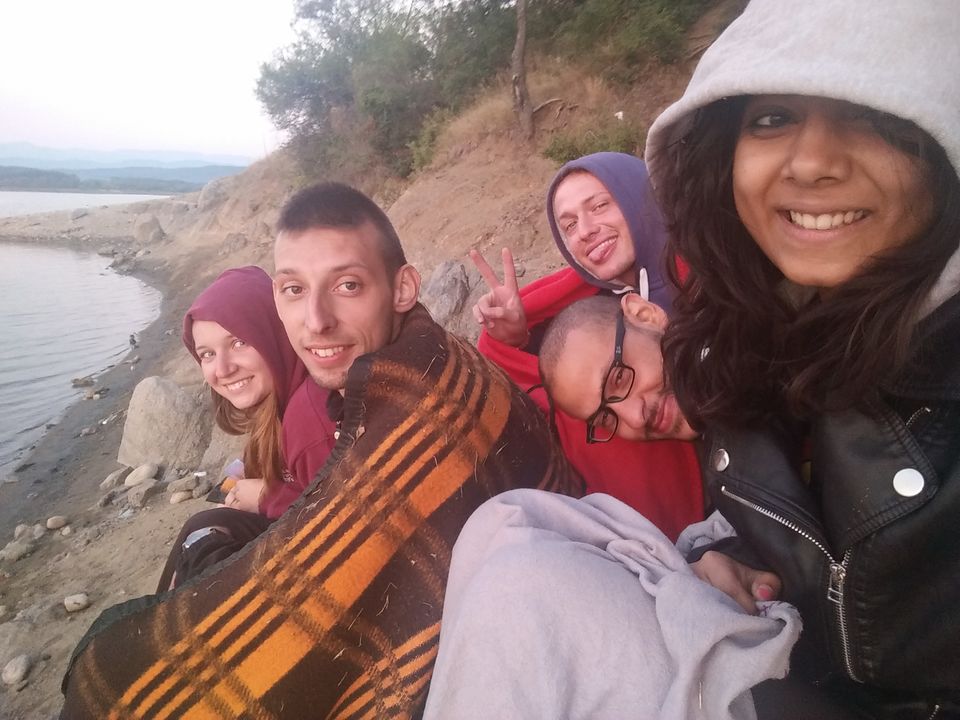 Sun rise on the lake 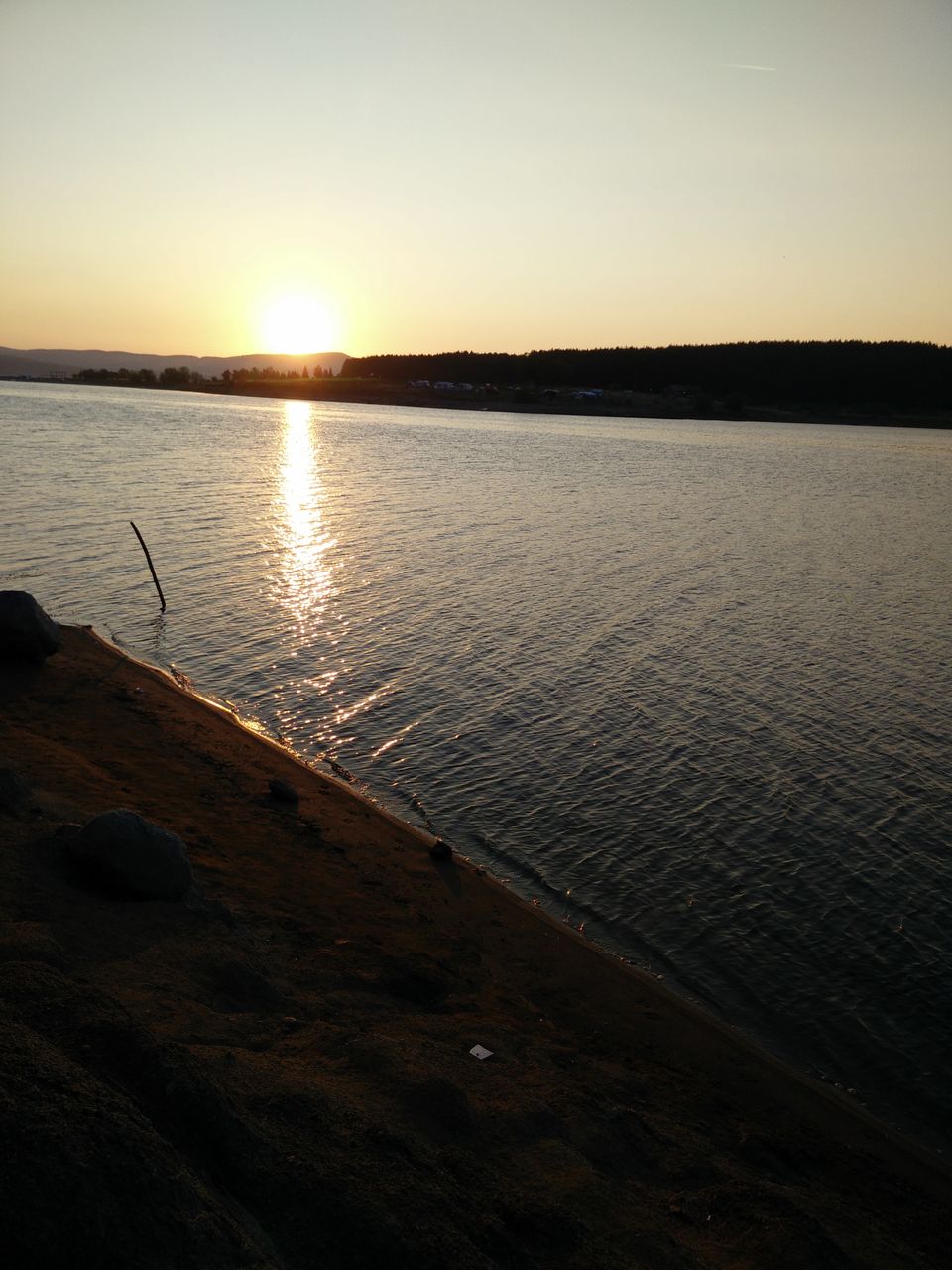 Another view of Iskar Lake 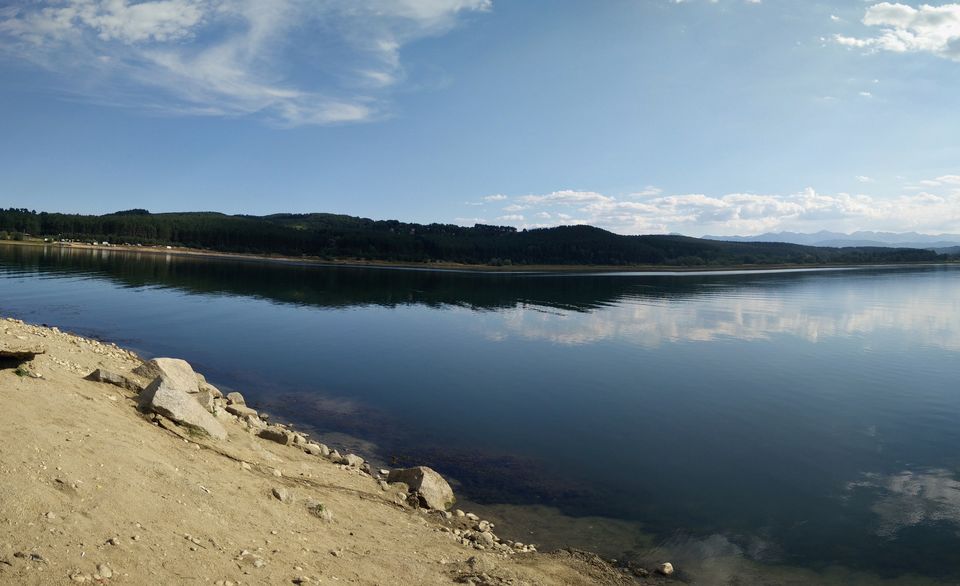 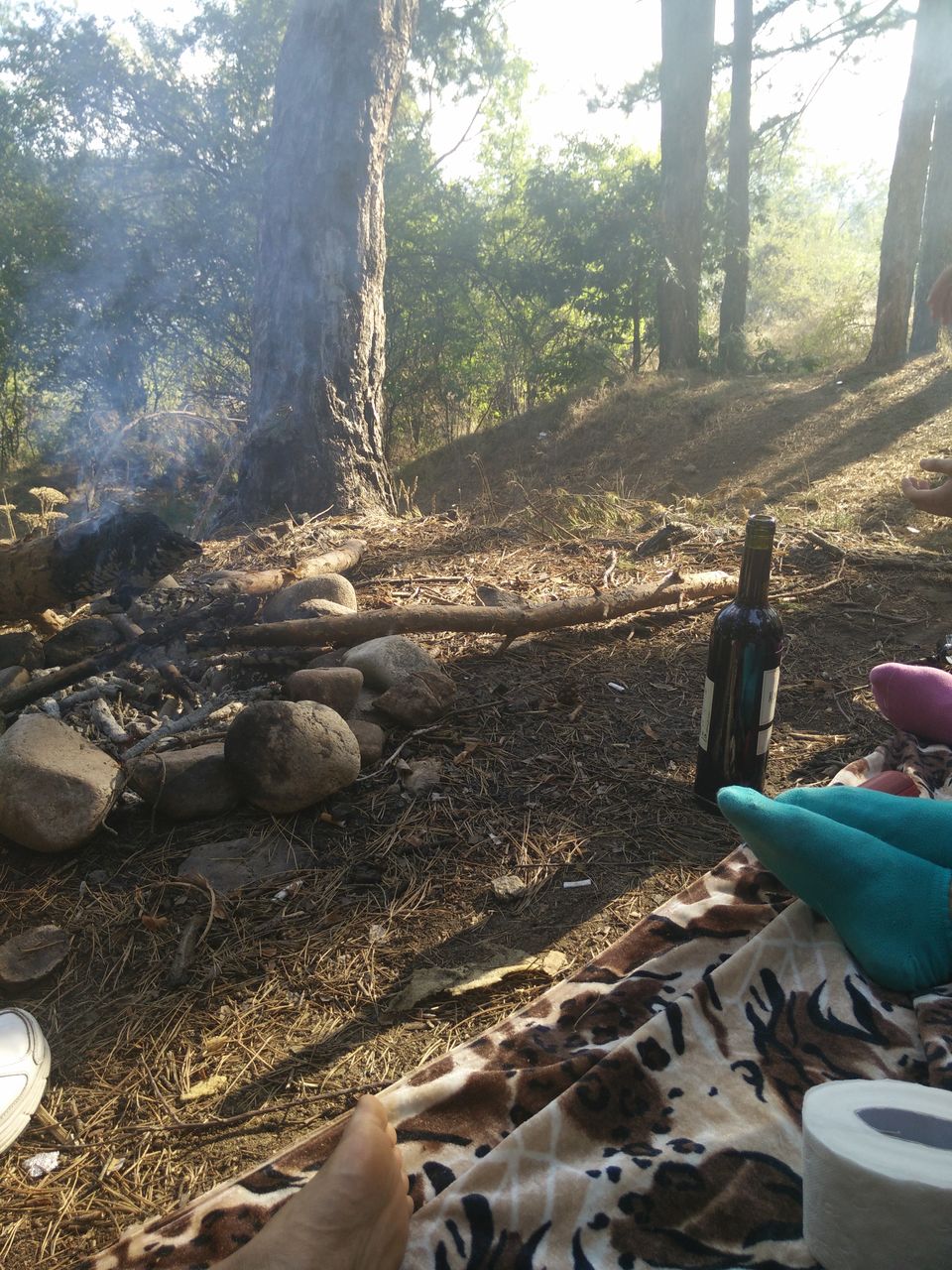 Walking on the highway 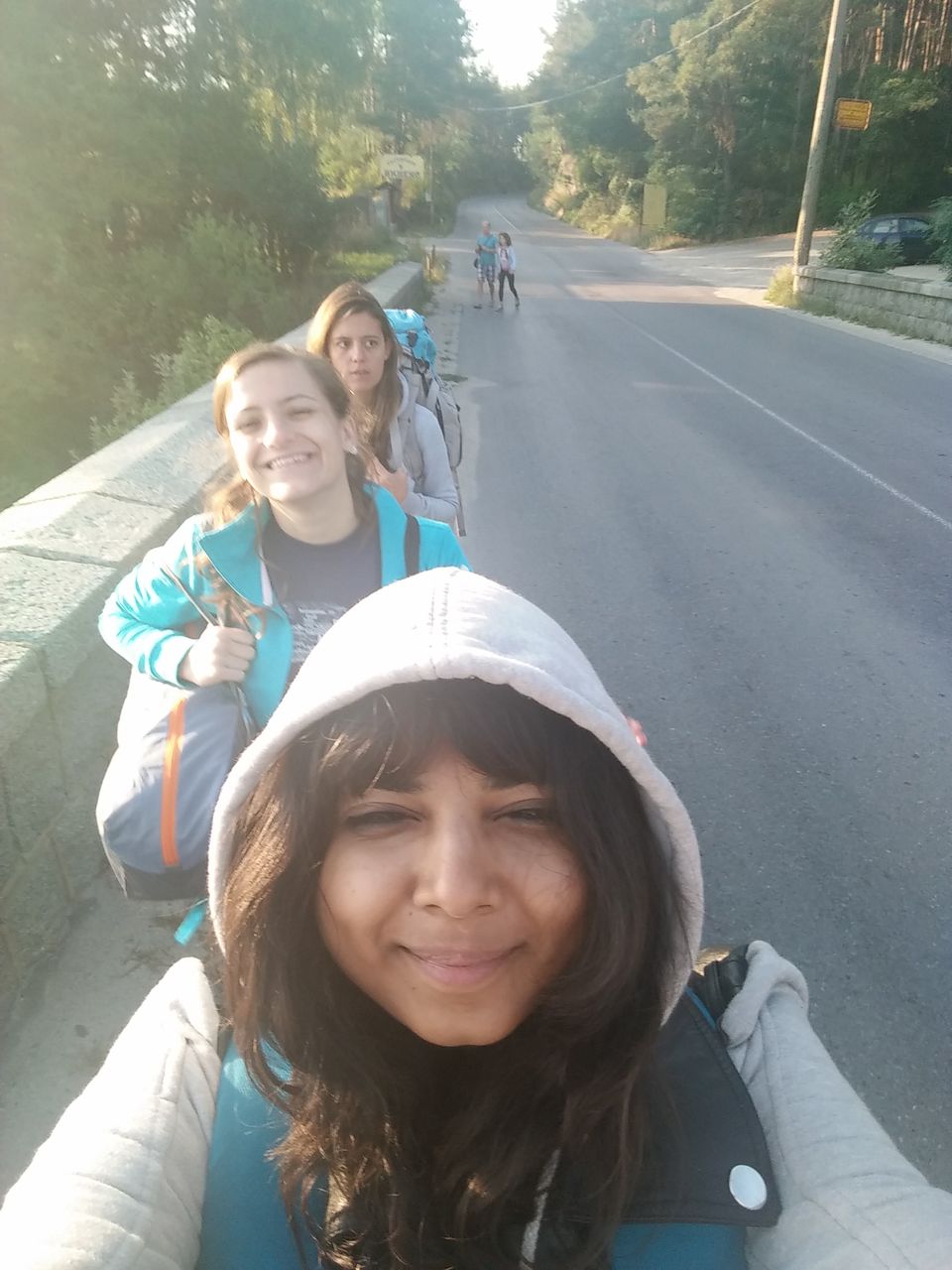 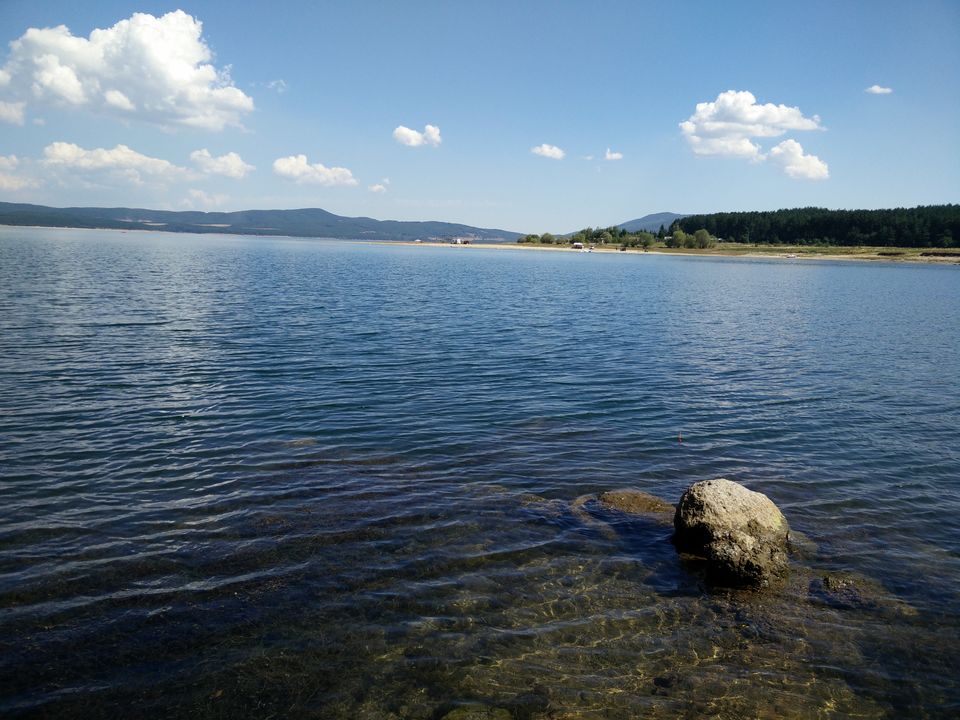 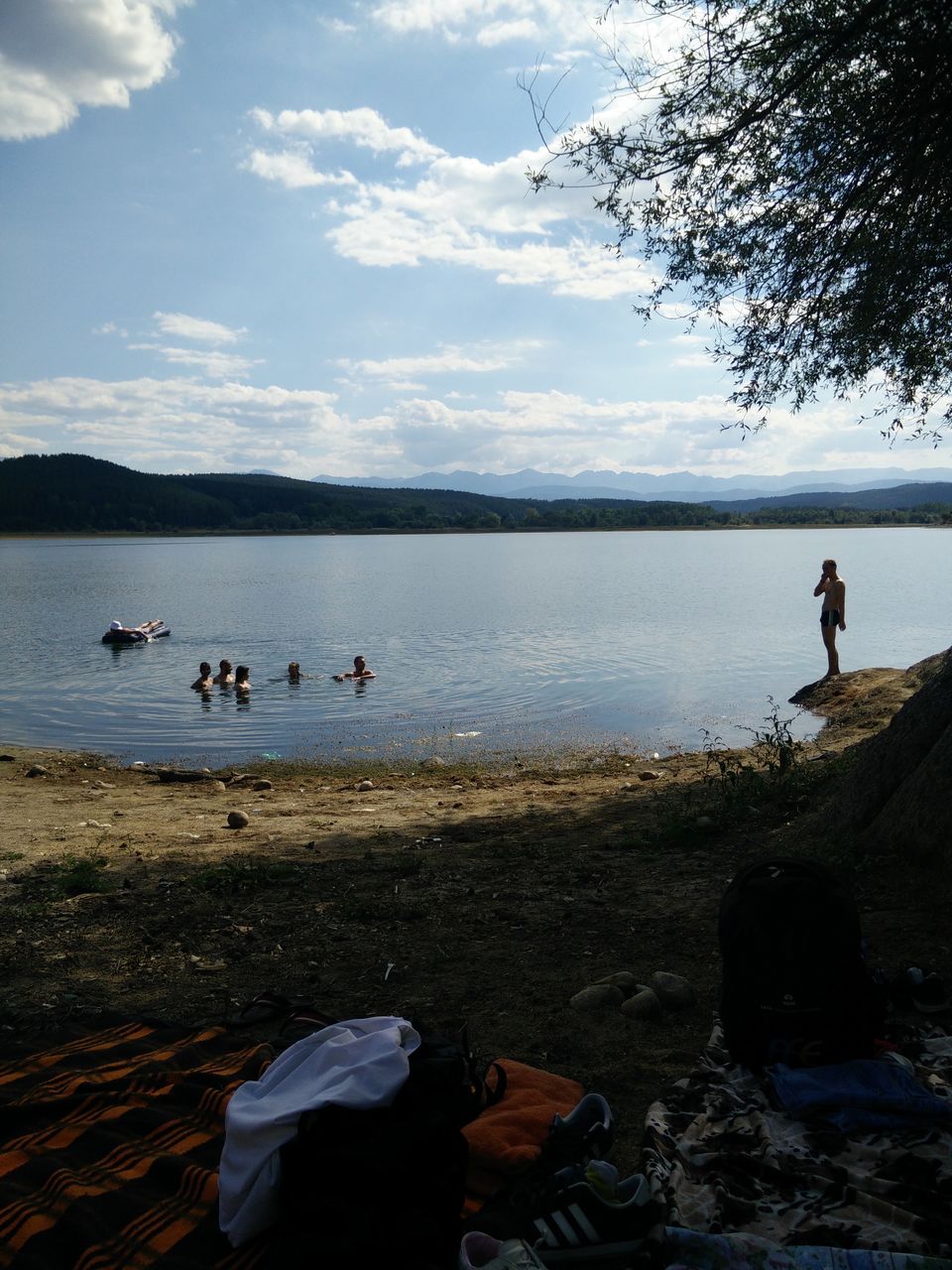 Jumping into the lake! 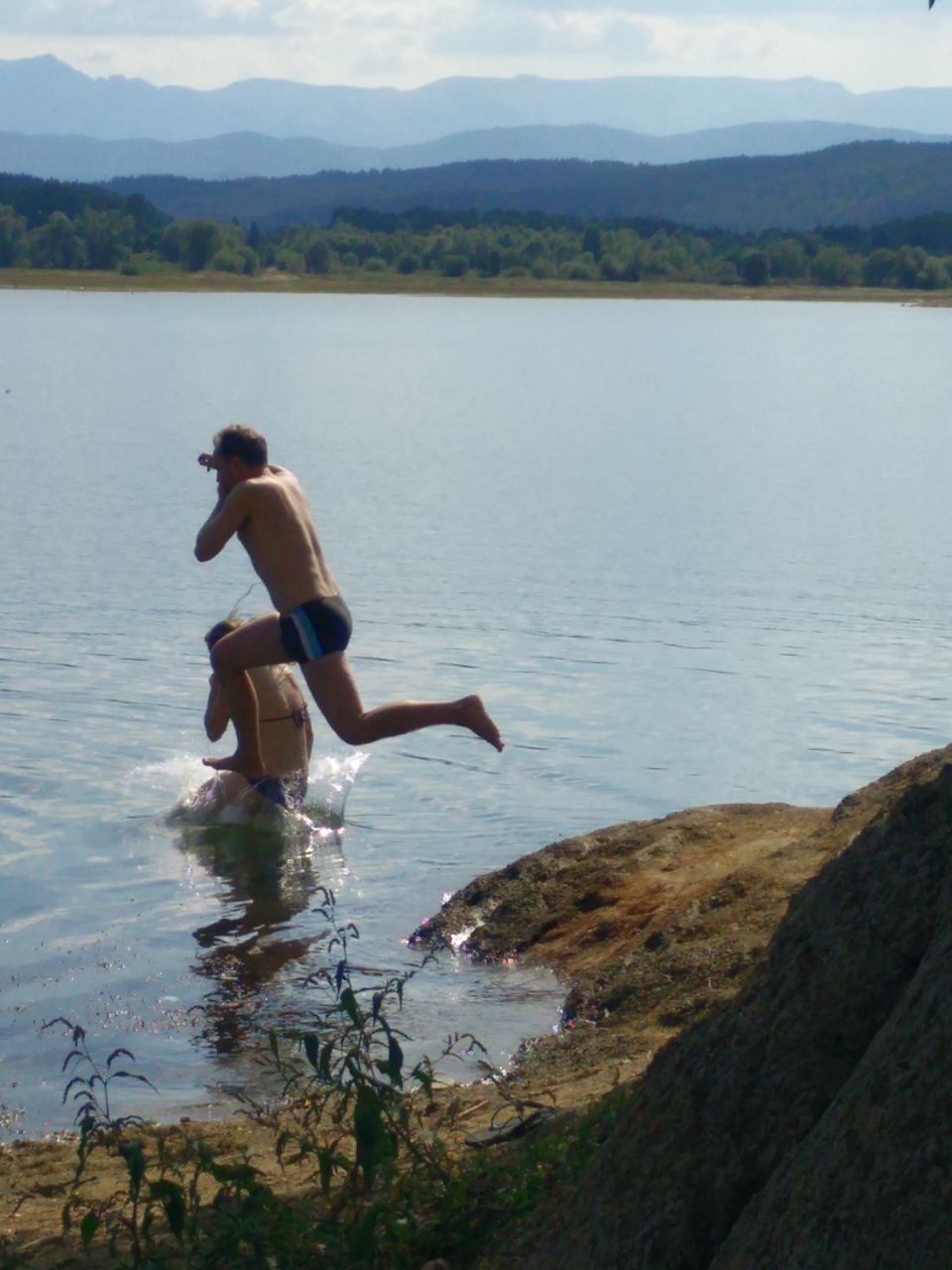 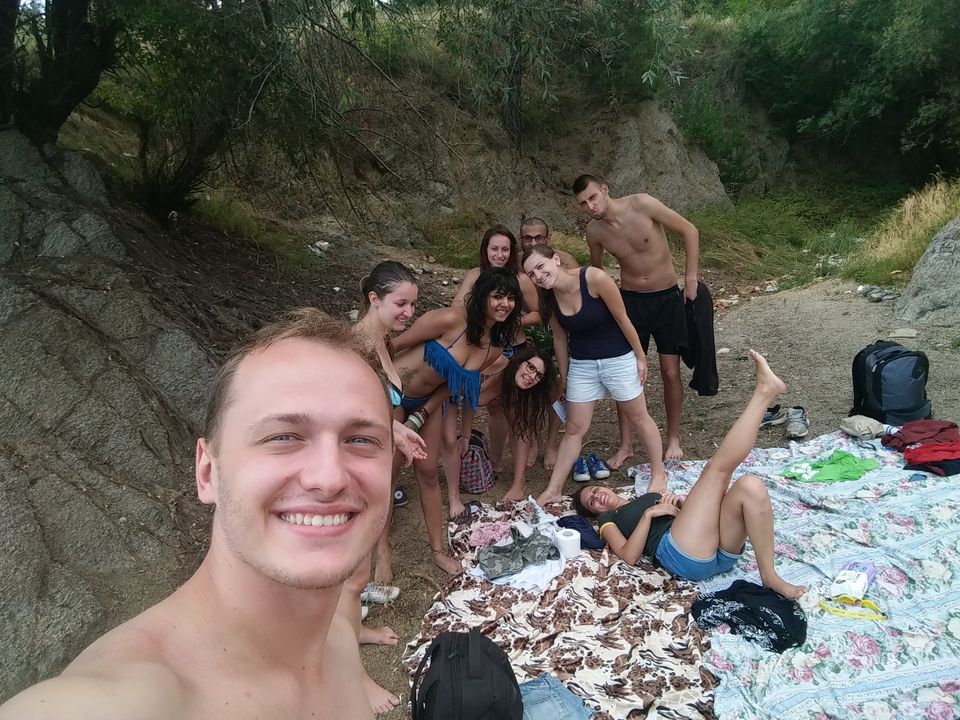 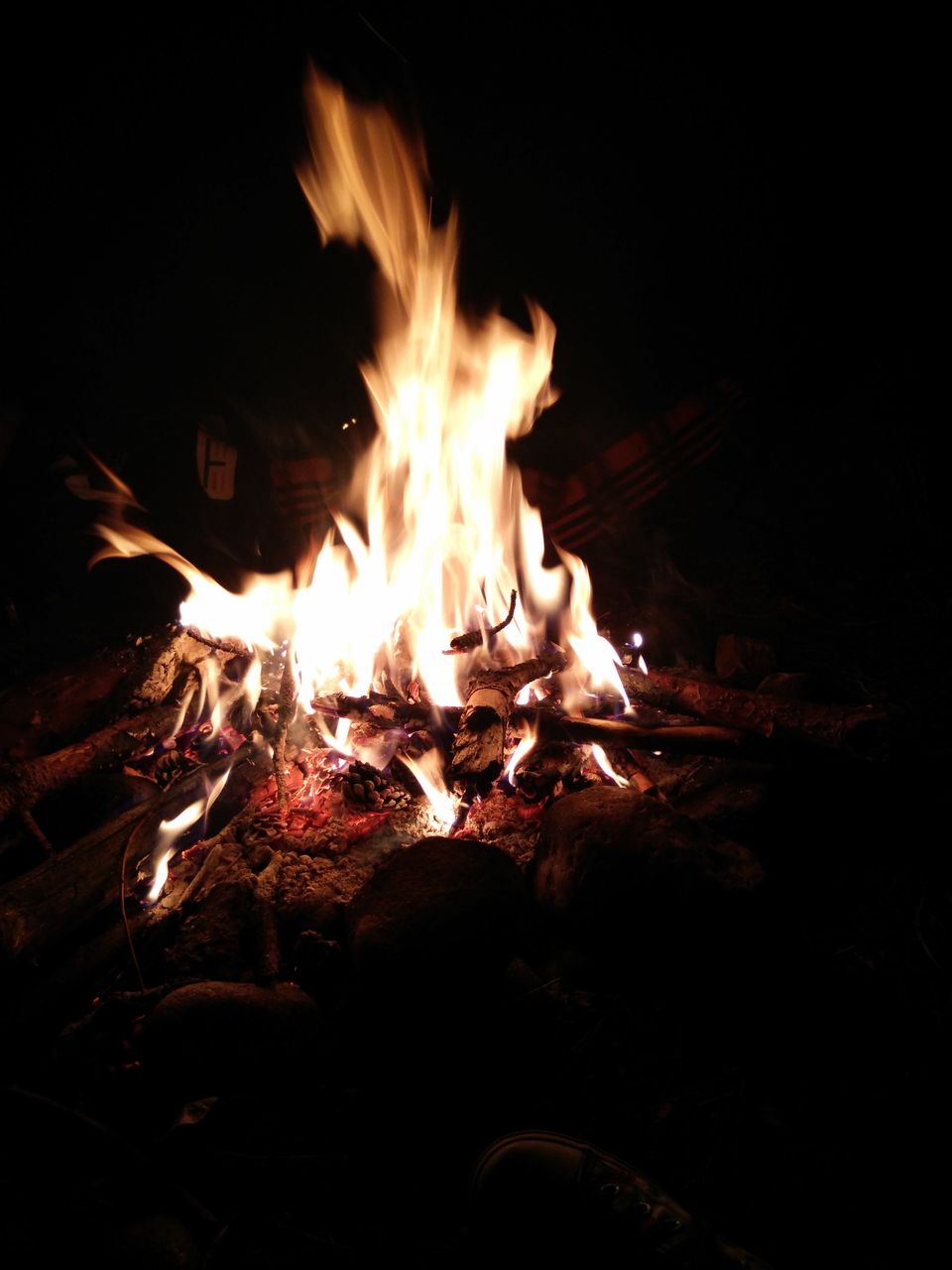 Instead of heading to the city of Varna as planned for our team bonding days, we ended up deciding to go on a camping trip instead to Iskar Lake. Situated about an hour's drive out side the city of Sofia, Iskar Lake is the biggest in land reservoir in Bulgaria. Course, I had no idea where we were going at this point.

We boarded the metro from Lavov Maost, switched trains at Serdika and continued to Joliot Curie. From there we walked to South Bus Stop and caught the bus to Samokov and we had to get down at Shtarkelovo Gnezdo, which was the closest stop to the Lake.

Now, none of us had ever come camping this side before so we really didn't know too much. After walking for a couple of miles on the highway and a few places that turned us down, we found a cozy little spot off the main road and down near the water to set up camp.

I've never been camping before so I was super excited about the whole tents, campire and swimming in the lake! The place was absolutely breath taking, we were surrounded by hills on all sides of the river, the shore across us had people who had already set up camp. There was barely any noise apart from the crickets and the wind. The lake itself was absolutely stunning! The water wasn't too cold, and you could see tiny silver fish dashing about in the weeds that lined the shore. There were many people fishing by the rocks and around the lake.

The next thing we had to do was set up camp. We were 9 people with two tents and most of us wanted to sleep outdoors under the stars. As soon as we had the tents set up, we ran down to the lake, found a small cove like area, pretty much stripped down to our swim suits and ran right into the water! The water was a little cold and it gave me goosebumps the second I steppped into it.I knoew the cold water was going to make me hesitant about getting in so I decided to take it head and jumped off  a rock right into it! The first splash took my breath away and the cold woke up all my senses. Swimming in a lake is comletely different from swimming in a pool! There is always a slight current and there is absolutely nothing below to stand on! It can be quite scary! We spent quite a bit of time swimming and splashing around! A couple of us got out and went exploring the rocks lining the shore of the lake and then kept cannon balling into the water!Did I mention the water smelled of fish but you hardly tend to notice it after a while.

The next part of the trip consisted of us hogging on the home made sandwiched we prepared earlier and then heading out to collect wood to start the campfire. It was going to get pretty cold at night. Considering that autumn is arriving, most of the branches were dry so they would burn easily. I ran around collecting dried pine cones, the crackled when they were in the fire and gave off a foresty smell. We got the fire started by the time the sun started to go down and we could feel the temperature dropping. From about 31'c in the day the temperature dropped to about 10'c. Changing into leggings and warmer T-shirts from shorts was a wise idea. We settled around the fire and roasted sausages over the fire and ate it with bread. We picked up brached , scraped off the outer bark and stuck the remaining part through the sausage and held it over the flame. I slit my sausgae in different areas so that it would cook faster.

We decided to go back down to the shore of the lake and lie there for a while and gaze at the starts. The pitch black night enhanced the beauty of the stars. There were millions of little diamonds twinkling in the sky. I was absolutely mesmerised by the beauty of the night sky. When we got too cold, we head back to the camp site and defrosted by the fire. A little while later a few of us went to another part of the lake and sat on the rocks. The moon had come out by now and there was a cool breeze blowing, forming ripples in the reflection of the moon in the water and breaking the stillness of the water's surface.

I happened to notice the fire dying out at this point and head back to stoke the fire. It was too cold to be without the fire. So after a point I was just sitting and tending to the fire and keeping myself from freezing. My hand grazed againt a hot stone at one point and I slightly managed to burn my fingers. That did sting a bit cause I couldnt really do much or rest my hands cause I constantly had to use them. 7 us decided to sleep out side and the other two slept insode the tents. I wanted to sleep by the fire cause it was too cold. One by one almost every one nodded off and after a point I dozed off too. We had sheets and blankets set up around the fire. about 3 hours later, i woke up cause every inch of my body was hurting from the cold. One of my teammates was also awake at this point so we poked and prodded at the dying embers till we managed to get a small fire started agian and then went to collect wood from the pile we collected earlier and started the fire agian. From that point on all we did was talk and keep tending to the fire. By around 5 30 am, we had exhausted the entire pile of firewood, so instead of sitting and freezing, we walked back down to the lake to watch the sunrise. There was a coool breeze blowing which literallly chilled my to my bones . We were all huddled inside our jackets and blankets while we sat by the lake.

By 7 am, almost every one was awake and stiff from the cold. We quickly ate leftover sandwiches and croissants for breakfast and proceeded to pack up the campsite and clean away our trash. The journey back was rather uninteresting as we all almost dozed off .

All in all, it was a pretty great first time camping experience and I definitely need to be better pre[ared to brace the cold next time!