From a ferry, seen is a brown headed seagull with the Taj Mahal Palace Hotel as its backdrop! 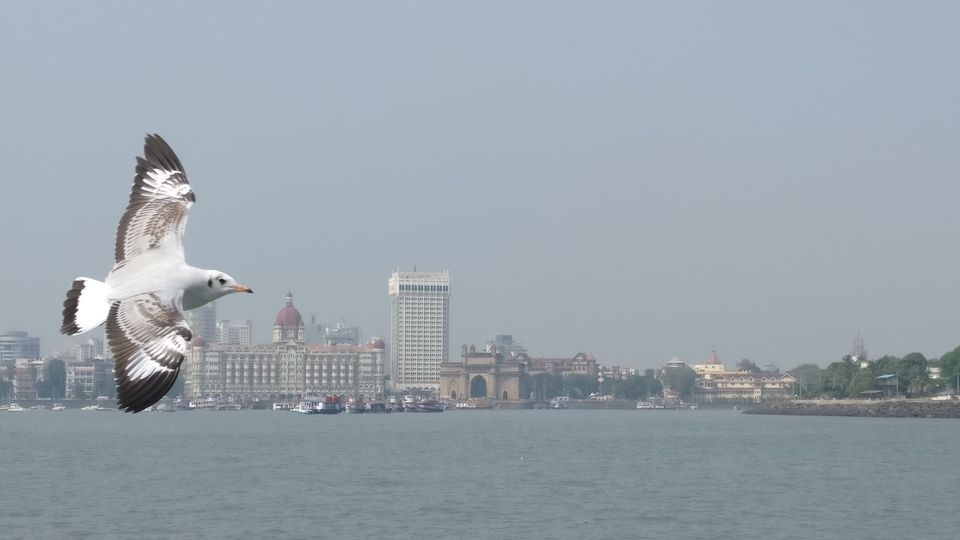 Did you know, Mumbai was crafted stone by stone on shallow seas and interlinked to become the thriving center it is today? Who, you may ask, were the architects of this maverick and modern city!!

As you would know, the erstwhile Bombay was colonized and developed by Portuguese and then by British like the rest of India during their rule. It is unique because seven unassuming islets were developed into coastlines and harbours over centuries. And Kolis, indigenous fishermen settlers from Gujarat, were the unseen architects who helped develop the coastlines and name the different harbours. Kolbhat(now Colaba) was a coastline developed and named by them.

Armed with this little research, I made my way out of Mumbai Airport and booked a prepaid taxi to Colaba. This ride unraveled Mumbaland(Mumbai for me) and showed me the brilliantly lit wonder that is Bandra - Worli Sealink. Enroute, the cabwala, my self-appointed guide and mentor, dutifully points me towards the Ambanis' and the Bachchans' splendor. I am in awe of this city yet there is a warmth to these hard working, no-nonsense mumbaikars that makes me feel right at home. My weekend stay at the Taj Mahal Palace and Tower Hotel was otherworldly... its splendor and hospitality made me feel like a Princess of my own Mumbaland(Oops, too cheesy?!).

Day one, I stepped out to greet my neighbor, The Gateway of India. Thank God, the British had some sense to use 16 th century Marathi architectural elements to splurge on an edifice. This historic gateway is one of the few goods that came out of their vanity. And as a weak balm to our Indian wounds, the last of British troops are said to have used this as a symbolic exit from India; post our long and tiring fight for Independence. So that said, now it serves as a tourist destination and also a port for short ferry rides. You can either book a ferry ride to just enjoy the Colaba coastline or go onto different destinations like Elephanta Caves to explore more of the Mumbai charm. I was happy to take the ferry to soak in the coastline. And boy, oh boy... whatta wow experience! Arabian Sea is the picturesque backyard of Colaba. Brown-headed seagulls are such attention seekers and you gladly indulge them... while they flaunt their aerobic flights. I felt like I was one of them till the ferry took me back to the Gateway and with it to reality.

Day two, split into 2, was about food and shopping! About time I saw what the fuss was all about. And yet again Mumbai rose majestically above all my mere expectations. From a good vegetarian fare to that rare Koli cuisine, quintessential vada pav, sugarcane juice, kulfi and what not. Somehow the terrorist shooting stories dimmed all the glory a wee bit for me. But with a scoop of BR to cheer me up, I went onto shop in the dazzling Causeway market haggling over rip offs, drooling all over the trinkets and antiques, treating myself to the Leopold café's yum food in between and heading over to Zara, housed in this palatial 110 years-old Ismail Building -Whoa, yet another grandeur that leaves you speechless! I wish I could do all that in the same sequence at least once a month 😉

Colaba, to me has everything! From a rich historical setting to colossal architecture, high end designer clothing to latest faux couture on the pavements of Colaba causeway, eclectic cuisine to finger licking good Mumbai street food, historic cafes to modern chains. And one other Colaba thing you cannot escape is its multitude! It is teeming with people almost during all times of day. Each time of day brings with it its own hue of people. Locals- rich and poor, tourists - domestic and foreign... transcending color, creed and culture. I hold Colaba, the place and its people close to my heart.

T Trivia : The Taj Mahal Palace and Tower Hotel has a lovely water ripple decked with golden lotuses and planters in its foyer. This flows as a tribute to the lives lost in the 2008 terror attacks and has their names etched too.