One of the greatest tourist attractions, in Bihar is the beautiful pilgrimage city of Gaya, visited by hundreds of thousands of Hindu pilgrims annually.
Gaya is historically and culturally significant. Dotted with holy relics and temples from the past, a place to find your innerself!

It sits near the holy city of Bodhgaya, where Buddha attained enlightenment, attracts thousands of tourists from across the world!

In South-central state of Bihar north eastern India, situated on the banks of Phalgu River, a tributary of the Ganges. At the junction of the Gangetic Plain and the Chota Nagpur plateau is notoriously hot in summer.

Gaya has temples of great beauty and heritage and makes it one of the most desired spiritual destinations in India.

Vishnupad temple is the main attraction in Gaya, many centuries old and is known for its legendary history.
Vishnupad Mandir is called so as it features  a 40-cm-long footprint of Lord Vishnu in a basalt rock. As the story goes, Lord Vishnu killed demon Gayasur at this place by stamping his foot on his chest. After Lord Vishnu pushed the demon under the earth with his foot, his footprint was retained in a rock.

Though the origin of the temple is unknown, it is believed that Ahilya Bai Holkar, the queen of Indore, had the present octagonal shrine built in 1787.

The main shrine is a temple dedicated to Lord Vishnu. Inside the temple’s sanctum sanctorum is the black basalt with the footprint of Lord Vishnu, on the surface visible even today, and is surrounded by a silver-plated basin.
It is also known as ‘Dharamshila’ or the religious stone.

The Sakaldwipiya Brahmins have been the traditional priests at Vishnupad Mandir in Gaya as Gayawar Pandas.
They have two subdivisions, Mag and Bhojak. The Mag are superior to Bhojak.The Sakaldwipi Brahmin is a well-known community in Bihar and North India.

The whole temple is built of huge grey colored granite blocks. The dome is in the shape of a pyramid and rises to a towering 100 feet.
The tower slopes down with alternative indented and plain sections. The tower resembles the peak of a mountain.
The temple is in an octagonal shape facing east. Lord Shiva is the main deity of the eastern side of the temple.

Others are the rocky temple-covered hills of Ramsilla and Brahmajini, the latter identified with the Gayashirsa hill on which the Buddha preached.

There are 45 sacred places between Pretshilla Hill (north) and Bodh Gaya (south), but most are in Gaya itself.
Pretshilla Hill (meaning Hill of Ghosts), Pind Daan is done here, for  those who die in  unfortunate circumstances. There is a temple of Yama God of Death on the hilltop.

A special fair takes place on the premises of the temple in the month of Pitripaksha, sometime in September.
Pitripaksha " Shradh"  is a time when Hindus pay respects to their ancestors, especially with food offerings. Starting from Amavasya, (new moon), it continues for the next 15 days. During Pitrurpaksha Pind Daan, last rites, by family members of the dead soul is considered very fruitful.
Pind Daan can be done all through the year in Gayaji.
Over the years, several foreigners have also come here for Pind Daan.

Pind Daan is a ritual in which the family members of the dead perform so that the souls of the deceased attains Moksha or ‘Mukti’ or freedom from the cycle of birth and death.

Legend says that Lord Ram and Sita had visited Gaya to do Pind Daan of Lord Rama's father King Dasharath.

According to tradition, in the absence of Ram, his wife Sita offered Pind Daan on the banks of the river to Dasharath.

The story goes that while in exile, Ram , along with his brother Laxman and Sita, came to Gaya to perform the "Shradh" of Dasharath. The two brothers went off to buy the items required for the sacred ritual, while Sita was sitting on the banks, playing with the sand, waiting for them to return. Suddenly, Dasharath appeared out of the sand, and asked for the Pind, saying he was hungry. Sita asked him to wait till his sons returned, so that she could give him the traditional Pind of rice and black sesame seeds. He refused to wait, asking her to give him pinds made of the sand in her hand.

Having no other option, she gave him the Pinds he desired with five witnesses – the Akshaya Vat, the Phalgu River, a Cow, a Tulsi plant and a Brahmin. Soon, Ram returned and started the rituals. It is said in those days  the ancestors would arrive in person to collect their share, and when Dasharath did not appear, they wondered why. Sita then told them what had happened, but Ram could not believe that his father would accept pinds made of sand. Sita now mentioned her witnesses, and asked them to tell Ram the truth.
Seeing Ram angry all the witnesses were scared, except the Akshaya Vat who took her side and told the truth, while the others lied, trying to take Ram’s side.
In her anger, Sita cursed all of them thus in Kalyug, Phalgu river flows underneath at Gaya; the Cow is not worshipped from the front as all others are - only its backside is worshipped;and they are found eating from garbage dumps, there would be no more Tulsi plants at Gaya and it would grow anywhere,  and the Brahmins would never be satisfied, and always crave for  more. She then blessed the Akshaya Vatam saying that all who came to Gaya would perform the Pindaan at the Akshaya Vatam too, after which their sacred ritual would be complete and the tree would be evergreen all through the year.

Legend of the Vishnupad Mandir Gaya talks about the existence of a demon known as Gayasura.
Gayasura deeply meditated and worshipped Lord Vishnu. Pleased with his dedication, Lord Vishnu blessed him with a boon that whoever sees him would be free from the cycle of birth and death, called Moksha.
People can attain Moksha only after a lot of meditation and good deeds, those who saw Gayasura attained it easily. This led to immoral people getting salvation or Moksha thus able to go to heaven. To prevent this Lord Vishnu pushed Gayasura beneath the earth and put his right foot on the asura’s head so that no one could see him anymore.

Gayasura started asking for food from beneath the earth. Therefore, Lord Vishnu gave him a boon that from then on he will be fed every day. The soul of the person who feeds him would go to heaven after death. The day Gayasura doesn’t get food, he might come out of the earth.  Hence, the tradition of feeding departed souls came into practice. This, as believed, is done for the well-being of the souls in heaven.

Also, a large banyan tree (Akshayabat) witnesses most of the last rites performed by the families of the dead. A temple in the courtyard of the Vishnupad Mandir Gaya is dedicated to Lord Narshimha.

I had read alot about Gayaji Pind Daan and was fortunate ,I got perform the sacred ritual of Pind Daan of my mother in Gaya, and pray for my late father,ancestors, pets, friends and family members who have left us.
A person can do Pind Daan in Gayaji only when both his / her parents have deceased.

The temple opens at 9 a.m. and closes at 12.30 pm after pooja and aarti. Temple opens its door again in the evening at 5 p.m. and then closes finally at 8 p.m. On Ekadashi the Temple is open whole day.

There are many Guest houses and Dharamshalas near Gaya where you can stay.

Bodhgaya which is a 25 minute drive from Gaya, has many hotels to choose from for a comfortable stay. Autorickshaw are available for travel, between Gaya and Bodhgaya.

Gaya is well connected by road,rail and air. 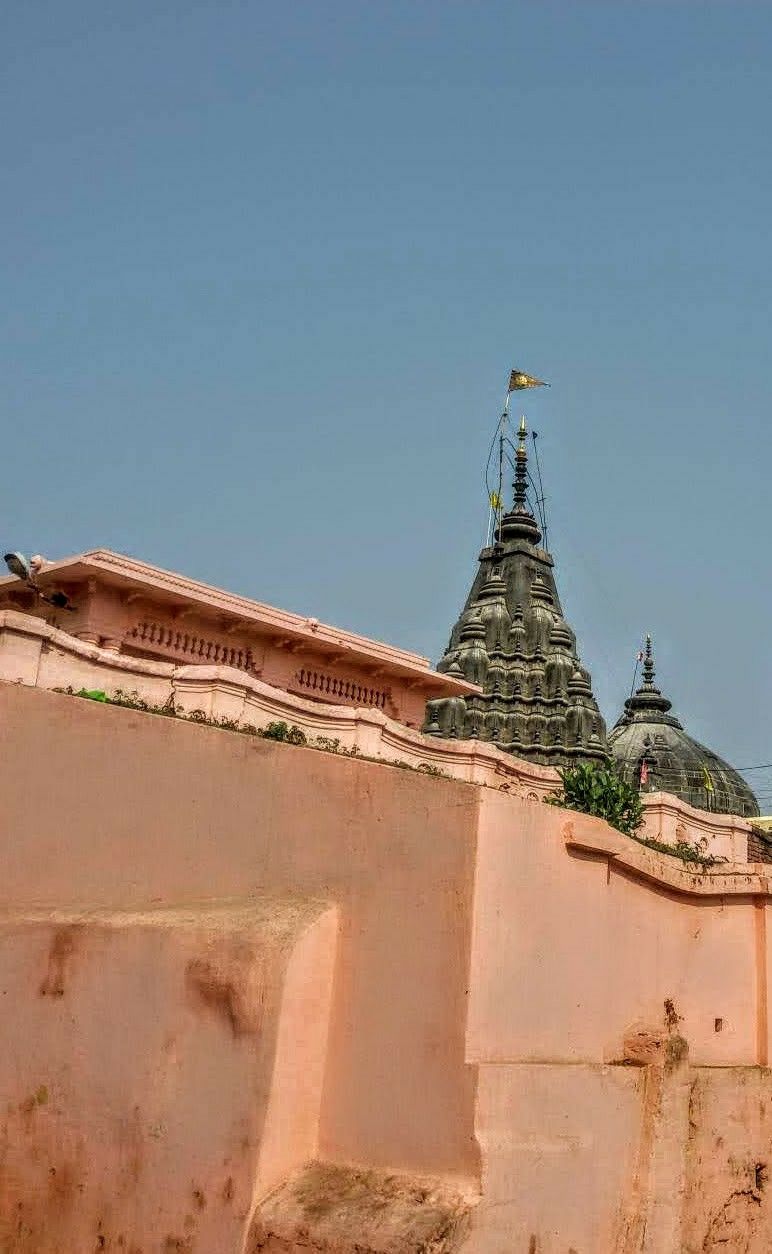 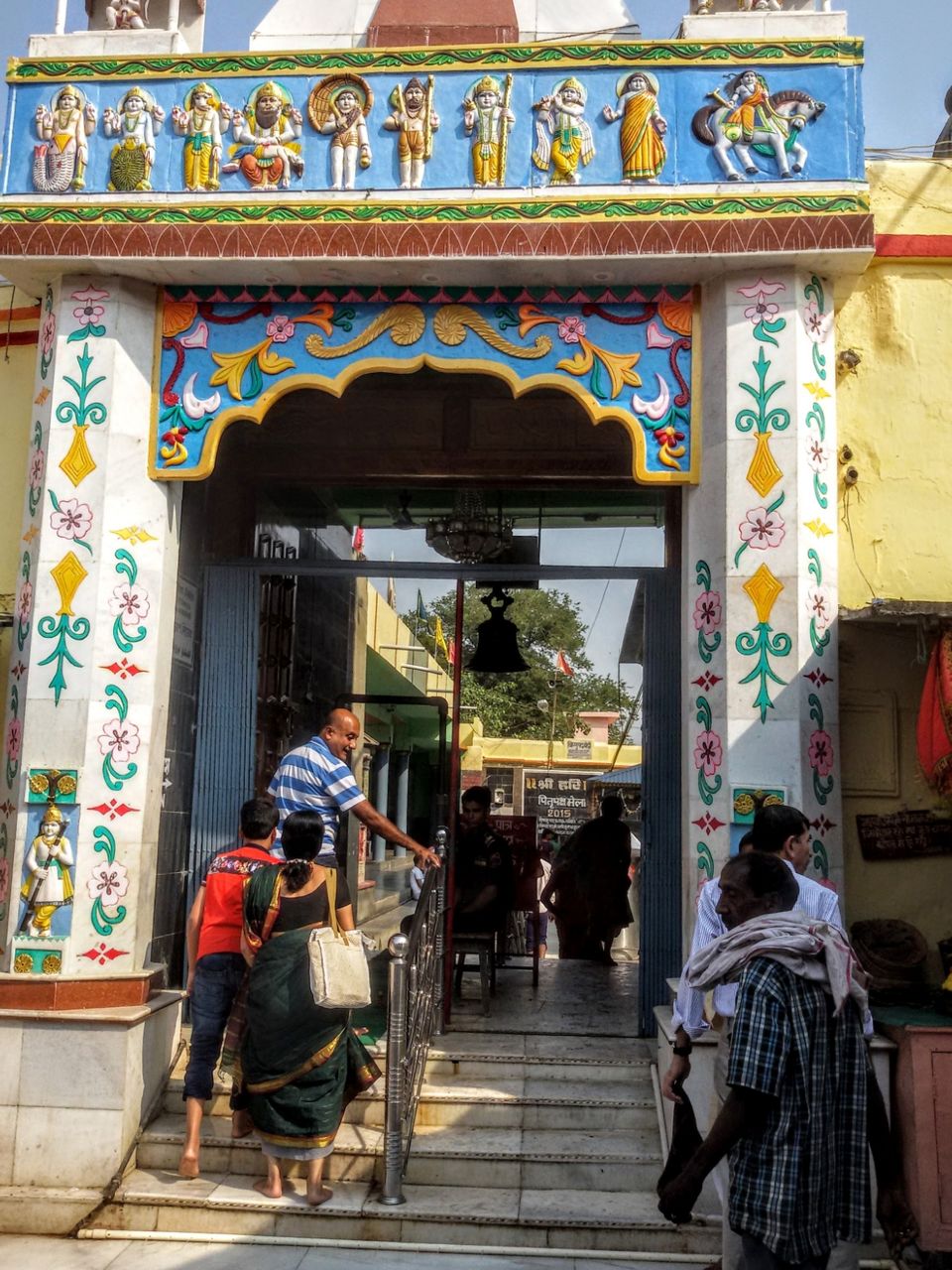 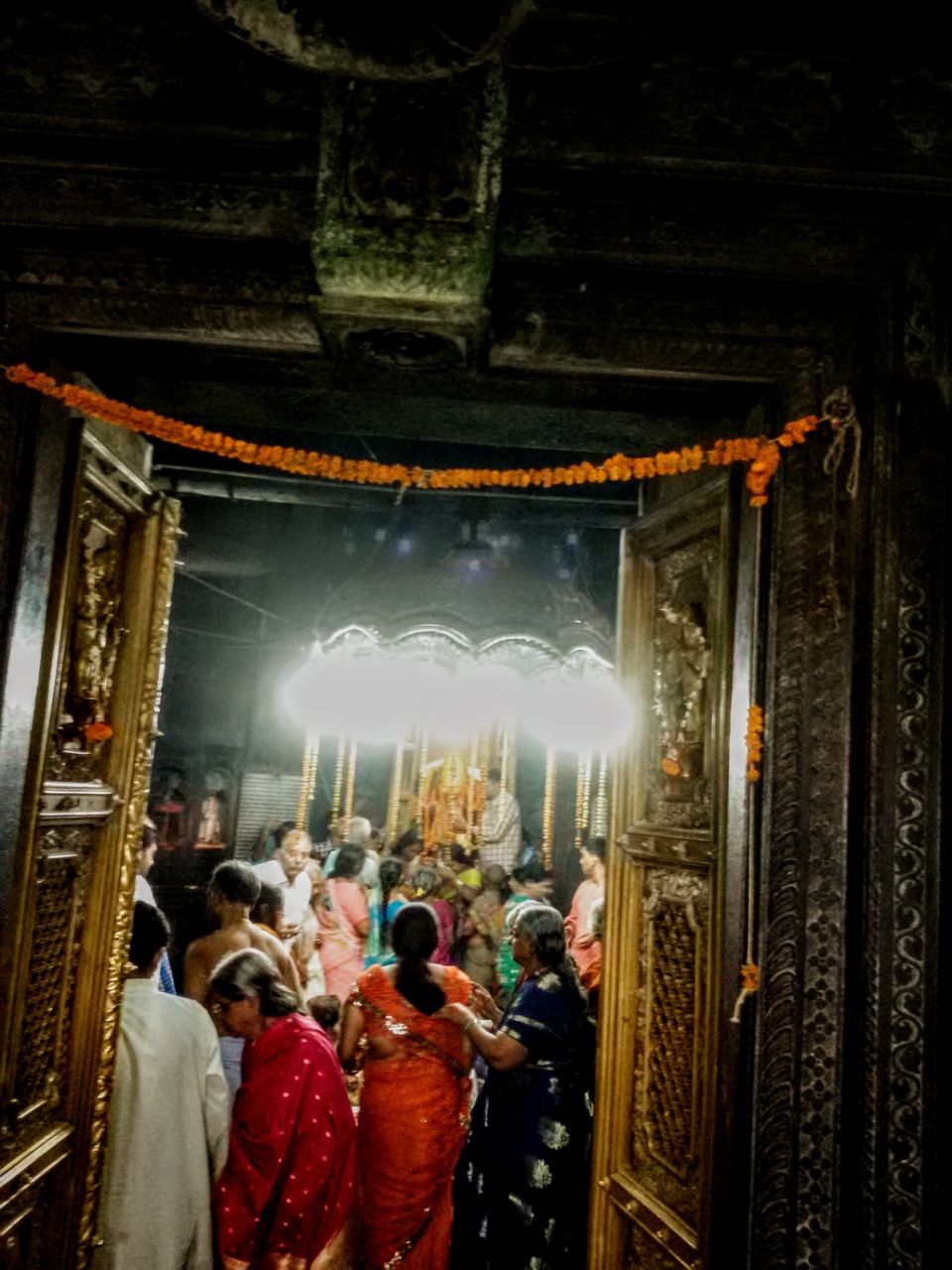 40-cm-long footprint of Lord Vishnu in a basalt rock, surrounded by a silver plated Basin. "Dharamshila" 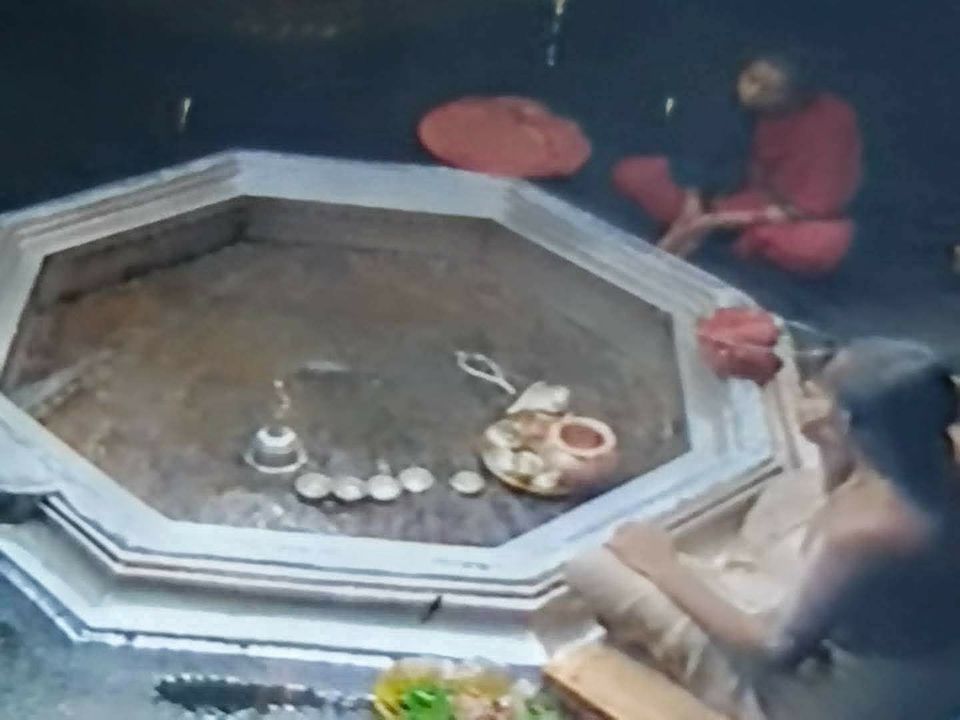 Family of the departed going to do the Pind Daan Rituals 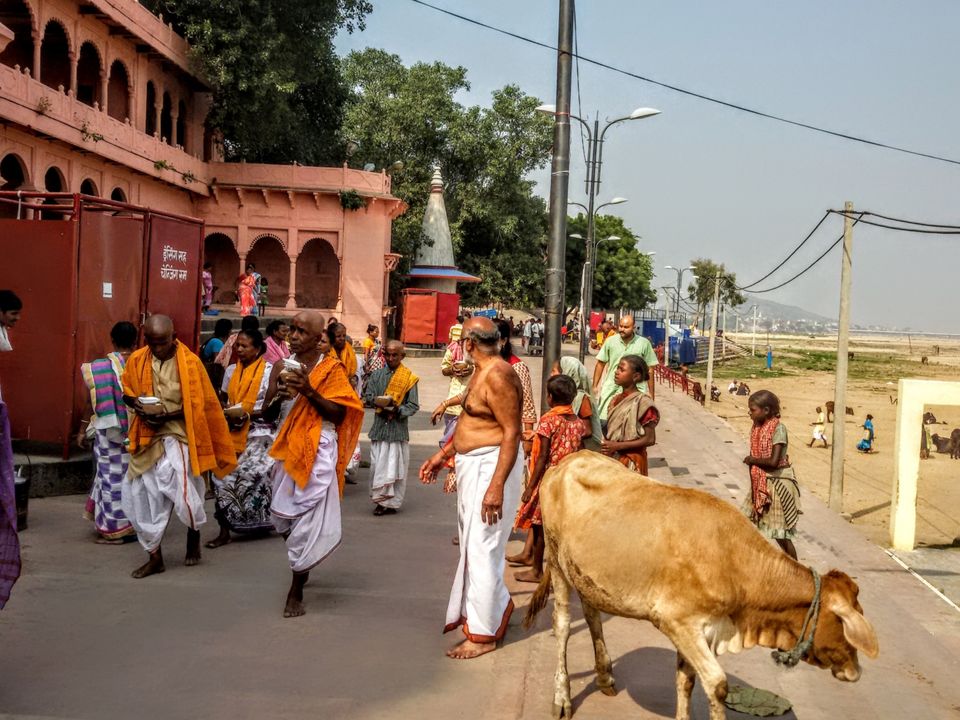 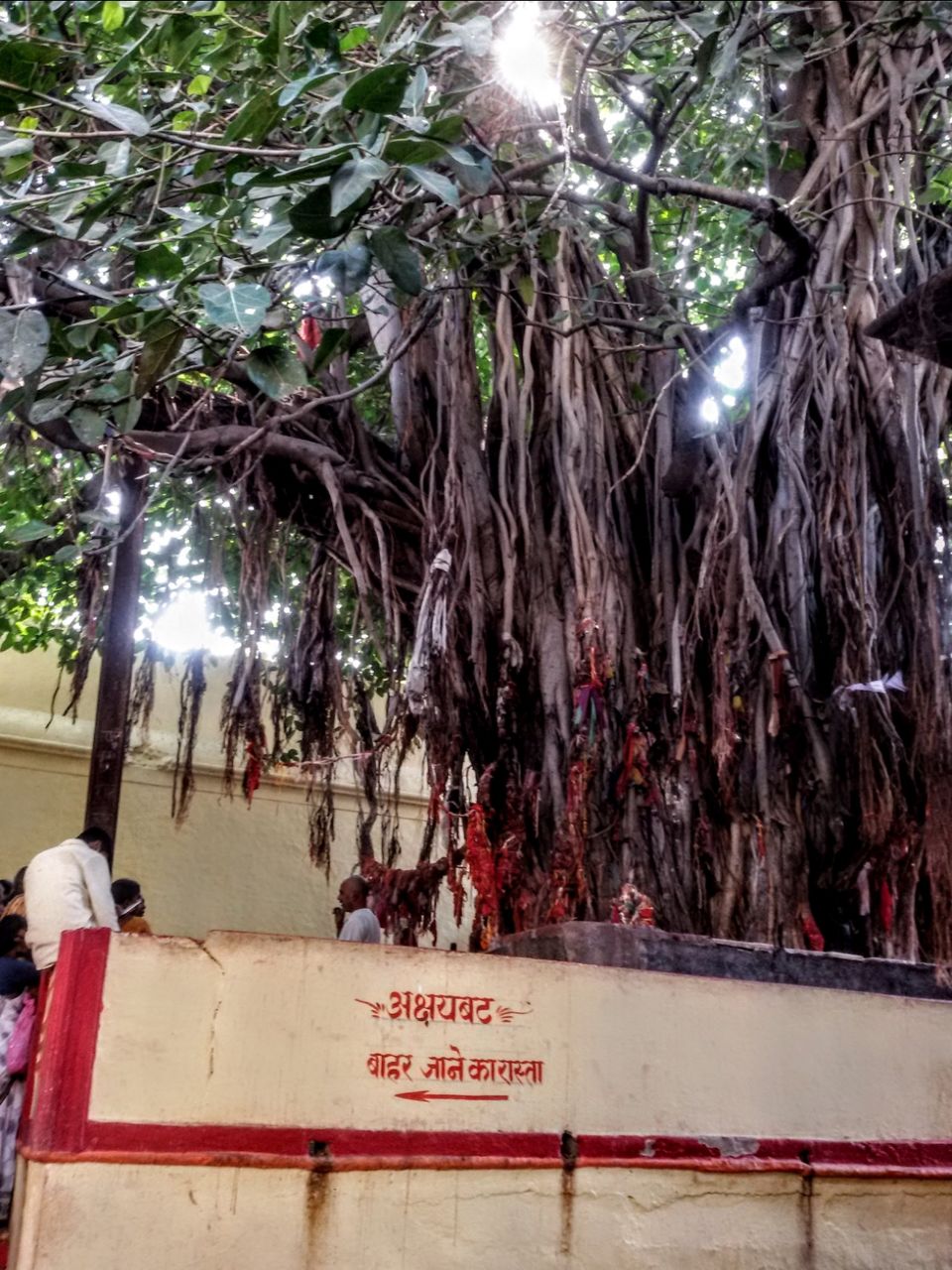 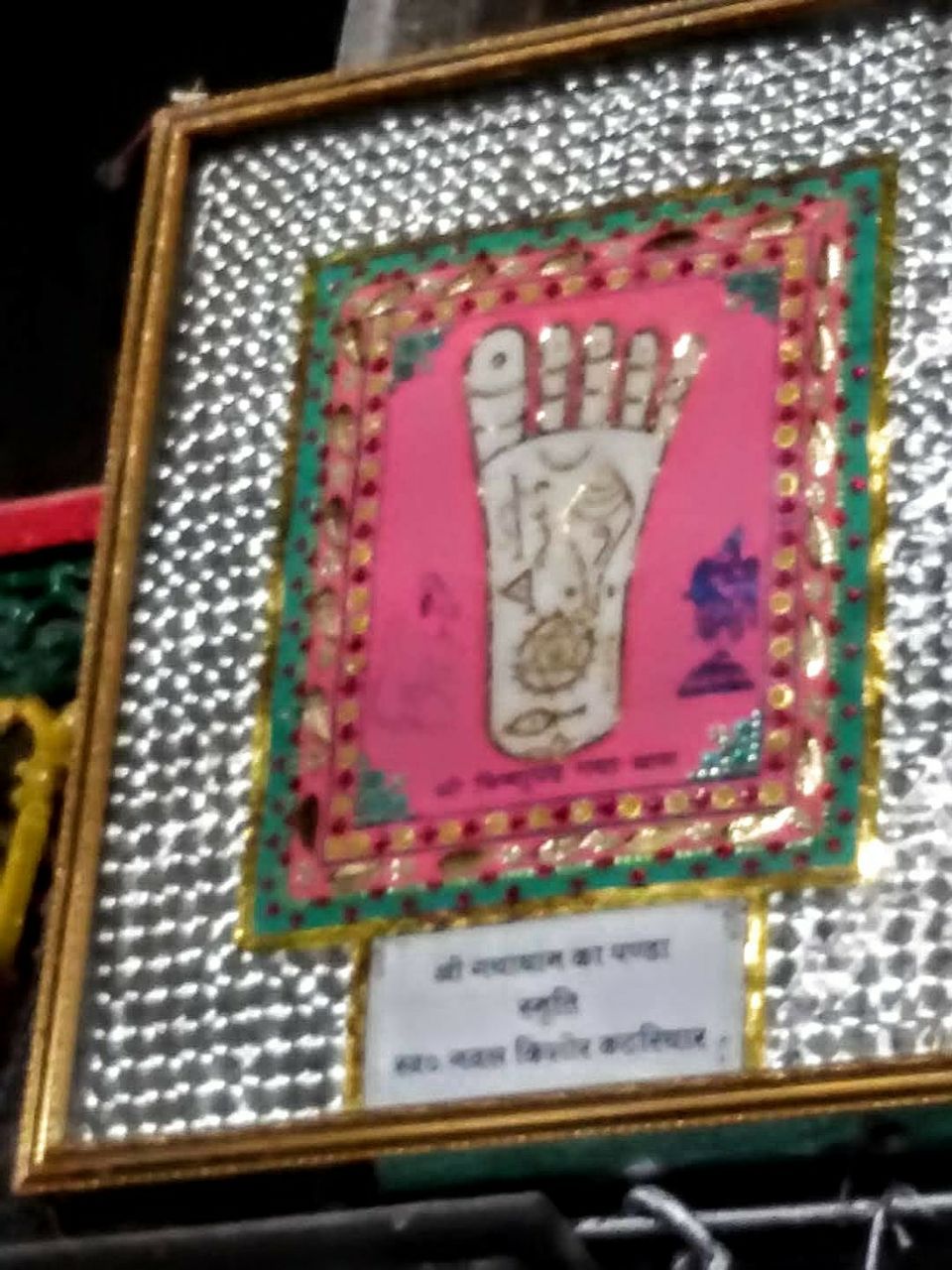 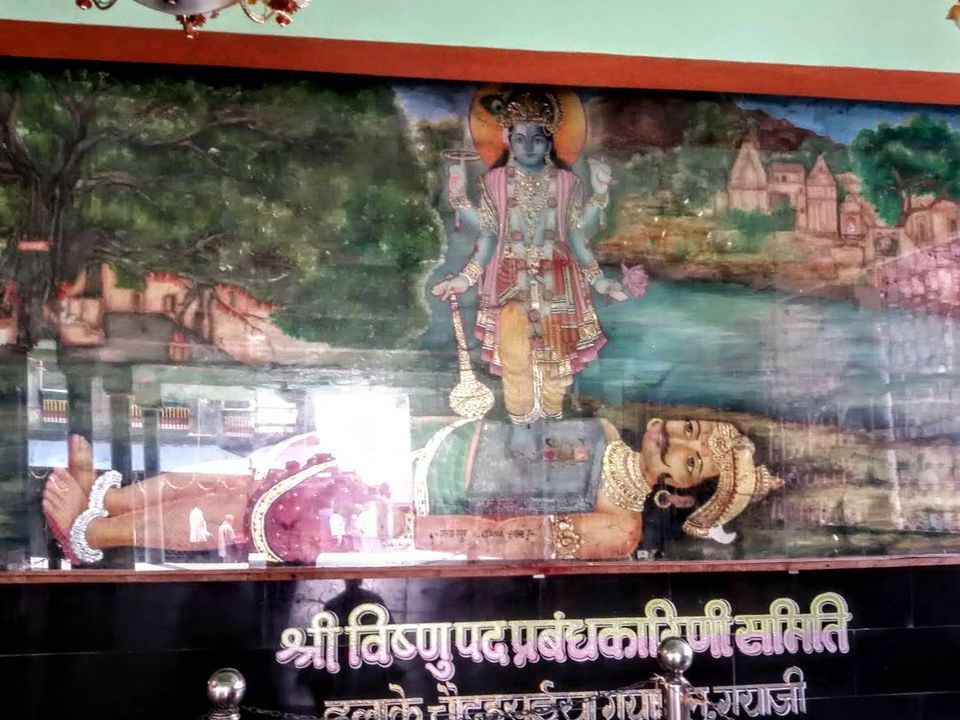 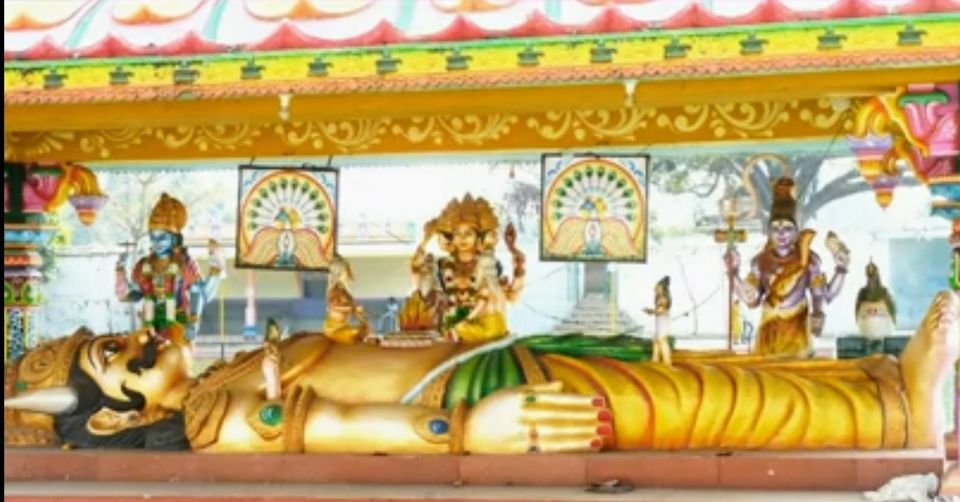 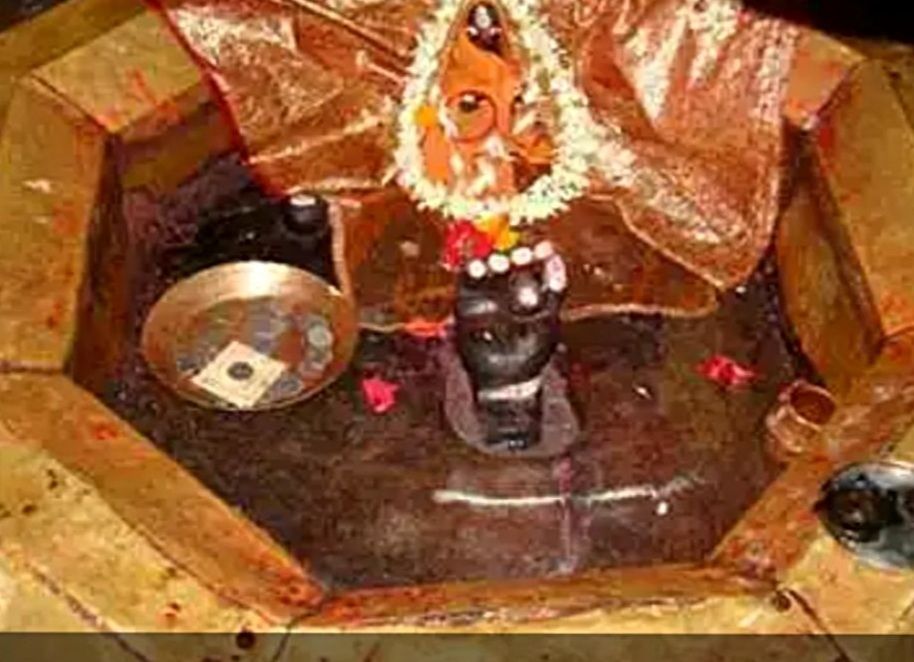 All set for the sacred ritual 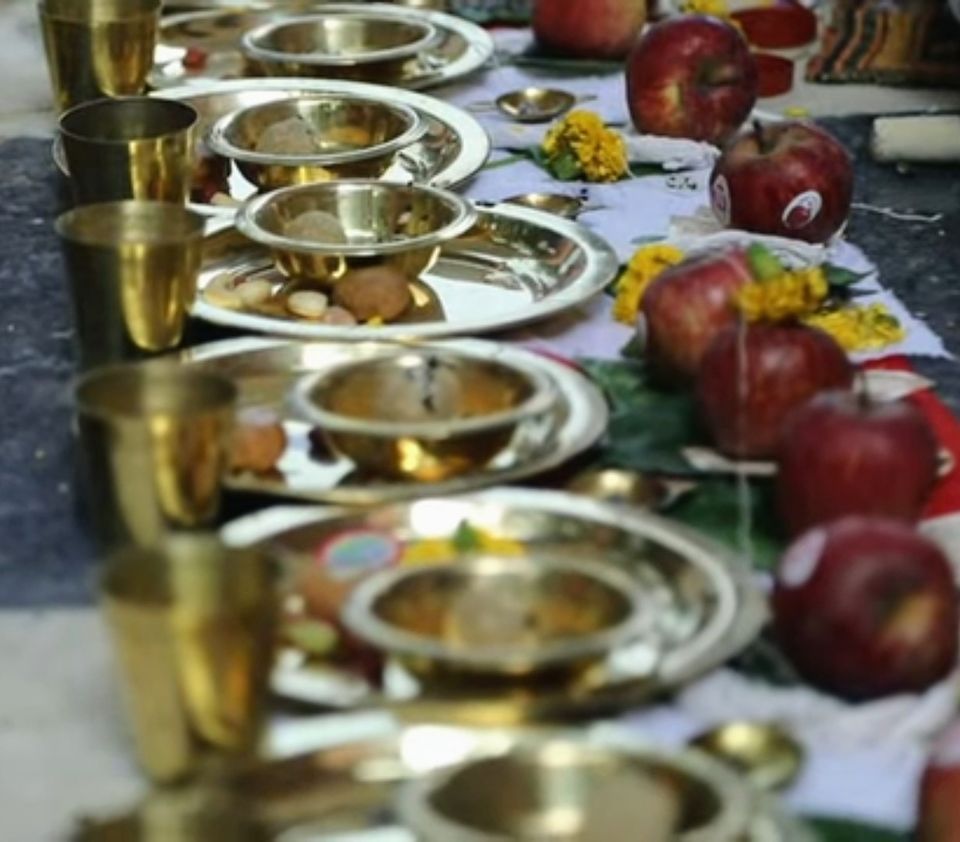 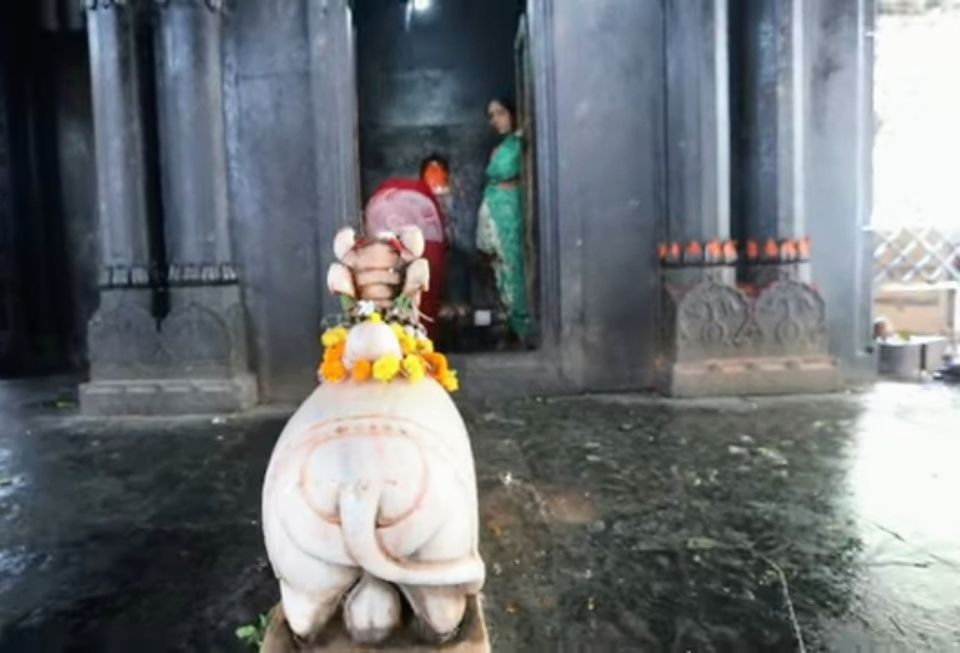 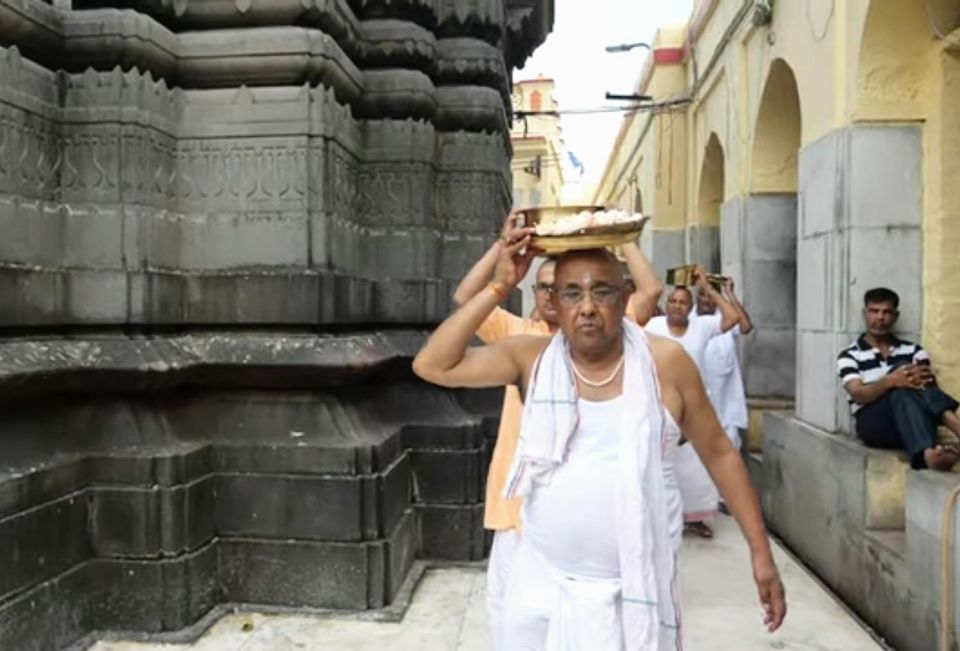 Water from the Phalgu River, one has to dig the River bed to access the holy water 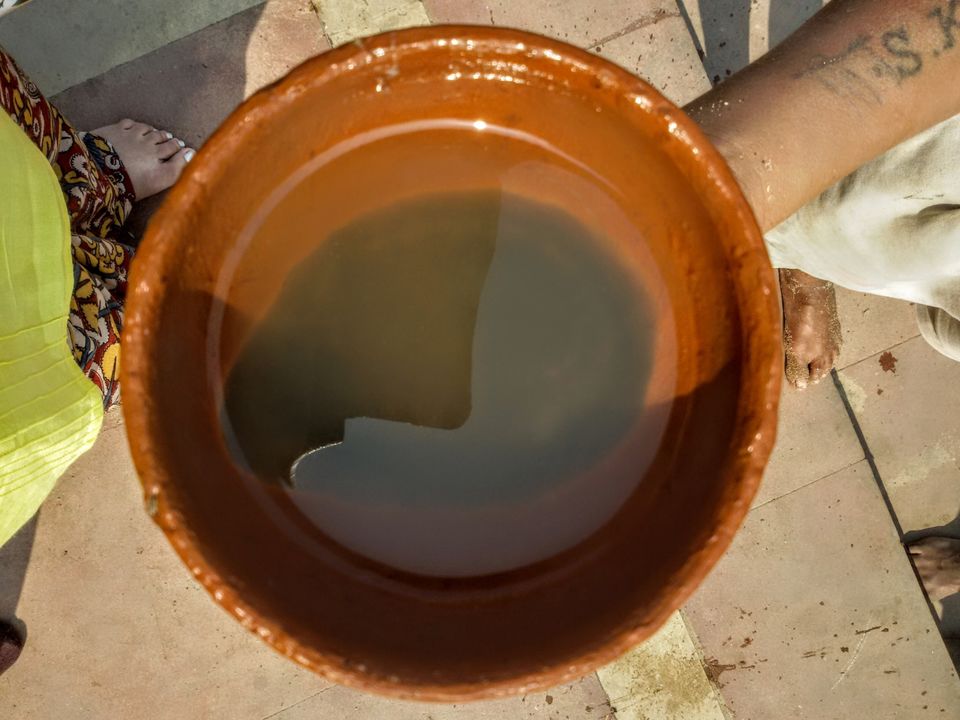 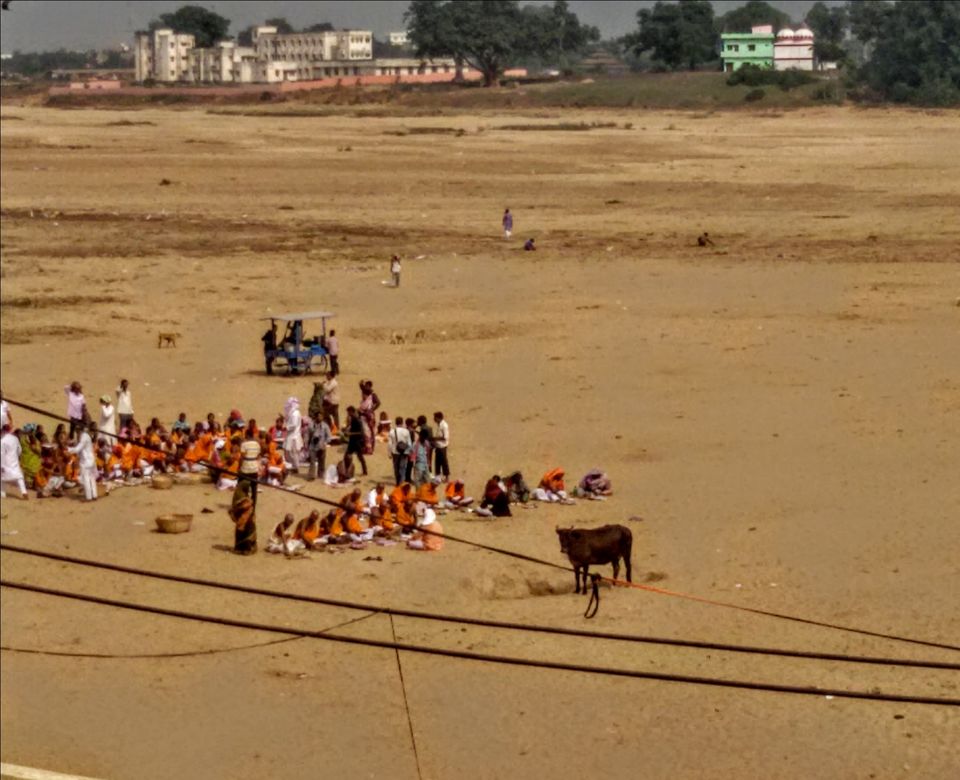 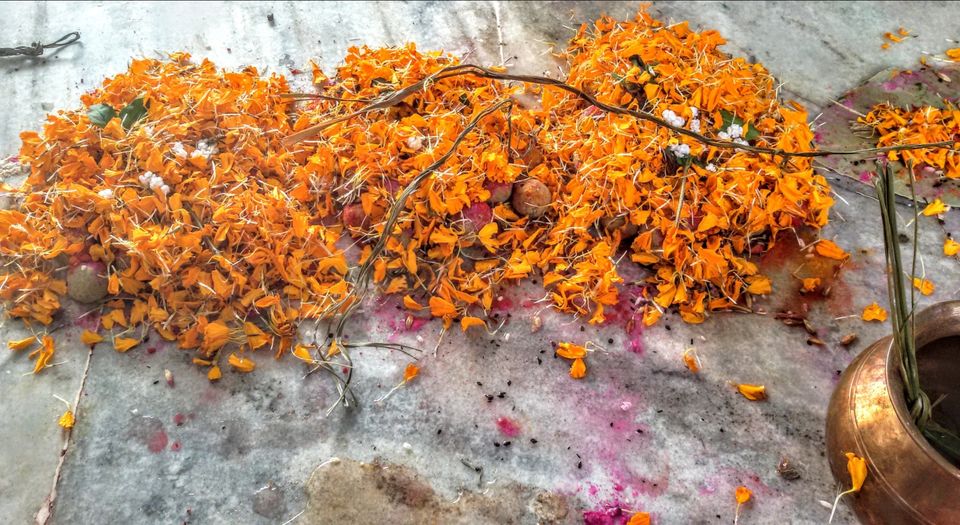