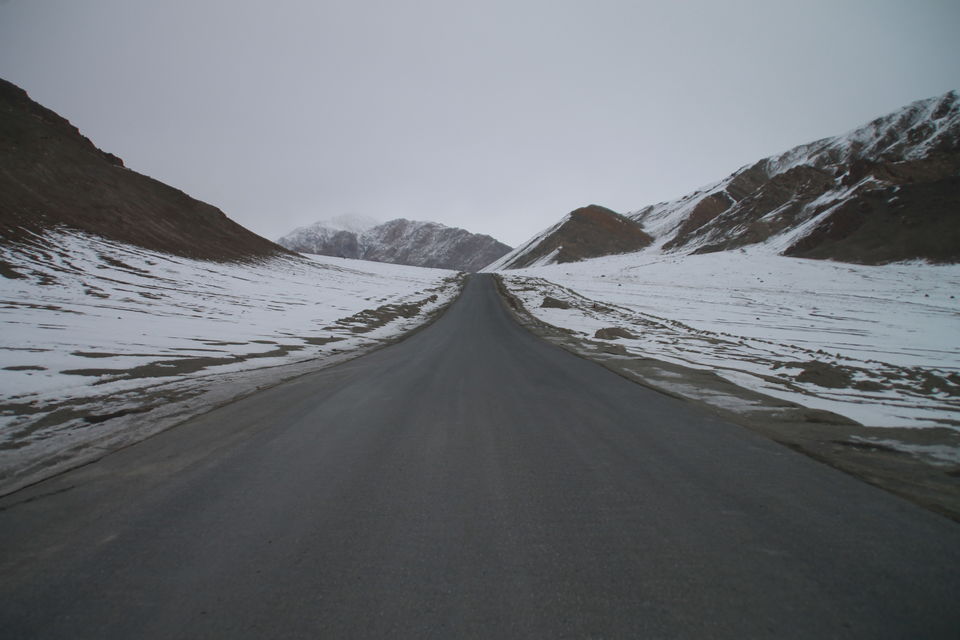 Like hundreds, my initial plan was to do the glamorous Chadar Trek. After reaching Leh, due to bad weather conditions and safety purposes the trek was called off ! So despite the tragedy, we (me and my fellow trekkers) decided to make the most out of our 10 day sabbatical from routine life. And Hey! It turned out to be one of the best trips of my life.

So to begin with we took an early morning flight from Delhi to Leh. All flights to Leh have early arrival i.e. before noon. As we were getting closer to our destination, there was a lot of air turbulence, but the jaw dropping visuals from the window kept me from getting nervous.

We safely reached Leh and just as we got out of the plane, it started snowing! Wait! Before feeling all that excitement let me remind you to put on your winter clothes, jackets, hand gloves as you are bound to sense the sudden and huge drop in the temperature!

We headed to the homestay that we had booked and were surprised to see such a beautiful house with modern amenities. It was a newly constructed one and we were floored to have experienced such wonderful hospitality! After our short span of homestay we moved to Hotel Palace View where our further stay was booked. But let me tell you, the best Tibetan food you will get is at homestays. Food is cooked by the local family and is mostly traditional Ladakhi meal – butter tea, kahwa, thukpa, thenthuk, noodles and soup served in common dining room with bukhari.

From here I will not go chronologically as everything in Leh in winters is unpredictable. You have to be ready to absorb last minute plan changes!

We booked a cab and planned to visit the close by places in the coming days.

The location of Naropa festival 2016. A festival held once in 12 years, rich in tradition and history, steeped in religious mythology and beautiful rituals, and fervently attended by people from across the globe.

Hemis Monastery is a Tibetan Buddhist monastery (gompa) of the Drukpa Lineage, located in Hemis, Ladakh, India. Situated 45 km from Leh, the monastery was re-established in 1672 by the Ladakhi king Sengge Namgyal. The annual Hemis festival honoring Padmasambhava is held here in early June.

Thiksay Gompa or Thiksay Monastery is a gompa (monastery) affiliated with the Gelug sect of Tibetan Buddhism. It is located on top of a hill in Thiksey village, approximately 19 kilometres east of Leh in Ladakh, India.It is noted for its resemblance to the Potala Palace in Lhasa, Tibet and is the largest gompa in central Ladakh, notably containing a separate set of buildings for female renunciates that has been the source of significant recent building and reorganisation.

The monastery is located at an altitude of 3,600 metres (11,800 ft) in the Indus Valley. It is a twelve-story complex and houses many items of Buddhist art such as stupas, statues, thangkas, wall paintings and swords. One of the main points of interest is the Maitreya Temple installed to commemorate the visit of the 14th Dalai Lama to this monastery in 1970; it contains a 15 metres (49 ft) high statue of Maitreya, the largest such statue in Ladakh, covering two stories of the building.

Shey Monastery and the Shey Palace

The Shey Monastery or Gompa and the Shey Palace complex are structures located on a hillock in Shey, 15 kilometres to the south of Leh in Ladakh, northern India on the Leh-Manali road. Shey was the summer capital of Ladakh in the past.

The palace, mostly in ruins now, was built first in 1655, near Shey village, by the king of Ladakh, Deldan Namgyal, also known as Lhachen Palgyigon. It was used as a summer retreat by the kings of Ladakh.

The Shey Monastery was also built in 1655 on the instructions of Deldon Namgyal, in the memory of his late father, Singay Namgyal, within the palace complex. The monastery is noted for its giant copper with gilded gold statue of a seated Shakyamuni Buddha. Shakyamuni Buddha is so named since Buddha was the sage of the Sakya people who resided in the Himalayan foothills and their capital was Kapilvastu. It is said to be the second largest such statue in Ladakh.

The Hall of Fame, located near the Leh Airfield, is a museum constructed as well as maintained by the Indian Army in the memory of the soldiers who had lost their lives during the Indo-Pak wars. It is also termed as a memorial for the war heroes. This building consists of two floors. While on the ground floor, there is information about the brave soldiers as and a souvenir shop but on the first floor, there are artifacts of various wars (mainly Kargil war) such as the weapons used during the war and some important documents, related to the same. There is another section dedicated to the Siachen glacier.

Spituk Monastery is a Buddhist monastery in Leh district, Ladakh, northern India. 8 kilometres from Leh.The site of Spituk was blessed by the Arhat Nyimagung. It was founded by Od-de, the elder brother of Lha Lama Changchub Od when he came to Maryul in the 11th Century. He introduced the monastic community. When Lotsewa Rinchen Zangpo (Translator) came to that place he said that an exemplary religious community would arise there and so the monastery was called spituk (exemplary). During the time of Dharma raja Gragspa Bum-Ide the monastery was restored by Lama Lhawang Lodos and the stainless order of Tsonkhapa was introduced and it has remained intact as such till present. Founded as a Red Hat institution, the monastery was taken over by the Yellow Hat sect in the 15th century.

The monastery contains 100 monks and a giant statue of Kali (unveiled during the annual Spitok festival).

Every year the Gustor Festival is held at Spituk from the 27th to 29th day in the eleventh month of the Tibetan calendar.

Shanti Stupa is a Buddhist white-domed stupa on a hilltop in Chanspa, Leh district, Ladakh, in the north Indian state of Jammu and Kashmir. It was built in 1991 by Japanese Buddhist Bhikshu, Gyomyo Nakamura and part of the Peace Pagoda mission. The Shanti Stupa holds the relics of the Buddha at its base, enshrined by the 14th Dalai Lama. The stupa has become a tourist attraction not only due to its religious significance but also due to its location which provides panoramic views of the surrounding landscape.

Namgyal Tsemo Monastery or Namgyal Tsemo Gompa is a Buddhist monastery in Leh district, Ladakh, northern India.Founded in 1430 by King Tashi Namgyal of Ladakh, it has a three-story high gold statue of Maitreya Buddha and ancient manuscripts and frescoes.

Leh Palace is a former royal palace overlooking the Ladakhi Himalayan town of Leh. Modelled on the Potala Palace in Lhasa, Tibet, the palace was built by King Sengge Namgyal in the 16th century. It is nine storeys high; the upper floors accommodated the royal family, while the lower floors held stables and store rooms.

Chumathang is a village in Leh District, Jammu and Kashmir in northern India on the bank of the Indus river.

It is 138 km southeast of Leh and 41 km northwest of Nyoma,and 29 km from Kiari, where there is a small medical centre run by the Indian army.It lies in the banks of Indus River. There are a few small dhabas or restaurants here making it a good spot to lunch and visit the hot springs which are about 2 km to the east. There is also a basic guesthouse and small store in the village.Near the hot springs is the Hot Spring Resort which has 4 basic rooms - one with a hot bath.

Travellers coming from the south will find that Chumathang is significantly lower than the Tsomoriri lake, making it a good stop for people suffering from altitude sickness.

Tso Moriri or Lake Moriri or "Mountain Lake", is a lake in the Ladakhi part of the Changthang Plateau in Jammu and Kashmir in northern India. The lake and surrounding area are protected as the Tso Moriri Wetland Conservation Reserve.

The lake is at an altitude of 4,522 m (14,836 ft). It is the largest of the high altitude lakes entirely within India and entirely within Ladakh in this Trans-Himalayan biogeographic region. It is about 16 miles north to south in length and two to three miles wide. The lake has no outlet at present and the water is brackish though not very perceptible to taste.

The lake is fed by springs and snow-melt from neighboring mountains. Most water enters the lake in two major stream systems, one entering the lake from the north, the other from the southwest. Both stream systems include extensive marshes where they enter the lake. It formerly had an outlet to the south, but this has become blocked and the lake has become a endorheic lake. The lake is oligotrophic in nature, and its waters are alkaline.

Accessibility to the lake is largely limited to summer season, though Karzok on the northwest shore and the military facilities on the eastern shores have year-round habitation.

The confluence of the Zanskar River and the Indus

The Zanskar River is a north-flowing tributary of the Indus. In its upper reaches, the Zanskar has two main branches. First of these, the Doda, has its source near the Pensi-la 4,400 m (14,400 ft) mountain-pass and flows south-eastwards along the main Zanskar valley leading towards Padum, the capital of Zanskar. The second branch is formed by two main tributaries known as Kargyag river, with its source near the Shingo La 5,091 m (16,703 ft), and Tsarap river, with its source near the Baralacha-La. These two rivers unite below the village of Purne to form the Lungnak river (also known as the Lingti or Tsarap). The Lungnak river then flows north-westwards along a narrow gorge towards Zanskar's central valley (known locally as gzhung khor), where it unites with the Doda river to form the main Zanskar river. This river then takes a north-eastern course through the dramatic Zanskar Gorge until it joins the Indus near "Nimmu" in Ladakh.

Gurdwara Pathar Sahib, is a beautiful Gurudwara sahib constructed in the memory of Guru Nanak, about 25 miles away from Leh, on the Leh-Kargil road, 12000 ft above sea level. The Gurdwara was built in 1517 to commemorate the visit to the Ladakh region of Guru Nanak Dev, the founder Guru of the Sikh faith.

During his lifetime Guru Nanak traveled to many distant places and one such place was Tibet. Guru Nanak is well respected by Tibetan Buddhists who consider him a saint; The Dalai Lama, spiritual leader of Buddhists in Tibet, has confirmed this in his discussions with some Sikh leaders saying that Tibetans revere Guru Nanak as a Buddhist saint under the name of Guru Gompka Maharaj.