Gurudongmar Lake at a height of 17100 ft, is among the top 15 highest lakes in the world and is the second highest lake in Sikkim as well as in India, the first being Cholamu lake at a height of 18000 ft, also situated in Sikkim.  Being the second highest lake in India, the panoramic and scenic beauty of the place is a sight to behold. Named after Guru Dongmar, the lake has a religious appeal.  The view of Mount Siniolchu and Khanchendzonga is breathtaking from that point. The beauty of the lake is awesome and out of the world spectacle. Surrounded by snow clad mountains and crystal clear icy water, it is considered to be a very sacred lake.

Legend has it that, Guru Padmasambhava (also known as Guru Dongmar), touched and sanctified the lake, and thus, even in extreme winter, a portion of the lake does not freeze.  The lake is also one of the sources of River Teesta, which flows through Sikkim, West Bengal and Bangladesh to merge with the Bay of Bengal.

The water of Gurudongmar Lake are said to have curative properties and many tourists carry the water with them on their way back.  Close to the lake, there is a 'Sarva Dharma Sthal', and as the name suggests, it’s a place of worship for all religions.

It takes around 8-9 hours drive from Gangtok to reach Gurongdmar Lake. This lake is in enroute to Lachen, a small town in North Sikkim located  at a height of 10000 ft.   Usually a night halt at Lachen is recommended as it takes around 3-4 hours from Lachen to reach Gurudongmar Lake. The closest village from Gurdongmar Lake is Thangu, at about 14000 ft. Visit to Gurudongmar Lake requires a permit as it located close to the Indo-Tibet border.

The best time to visit the lake is November to June.

There is paucity of oxygen at such a height, and thus, staying there for more than an hour is not recommended for most tourists. 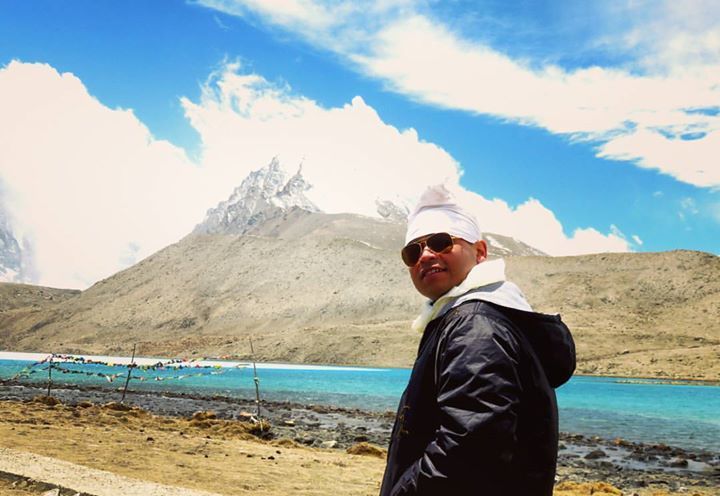