Germany Travel GuideGermany TripsLiving The White Dream In The Bavarian Alps Of Germany :)

Living the white dream in the Bavarian alps of Germany :)

I don't have as much as a word to describe what it felt like to be strutting across widespread fields of snow to reach out to the distant snow-capped alpine peaks. After the experience, all I can say is that fairy lands exist and if you are still wondering where to start looking, then you might want to consider spending your next winter in the midst of the Bavarian valleys. PS: What you may see on the internet will most certainly give you second thoughts about visiting the place in winters because every season happens to paint the place in its own distinct and spectacular colours. Nevertheless, irrespective of the time of the year, its a fairy land! Also, you can be assured of some magic. Ever imagined sustaining on a budget of a mere 150 euros over three days on a European outing? Even if nowhere else, its certainly possible in Bavaria :) :) And here's your fairy God mother's guide to the best of Bavaria and how she pulled it off on a shoe-string budget! ;)

The Neuschwanstein castle, a wonderful gift from King Ludwig-II, is a very popular attraction in Germany. However, what many miss out on their trip are the other hidden wonders in the picturesque village of Hohenschwangau, where the castle was constructed. So, don't be lazy and start your day early. 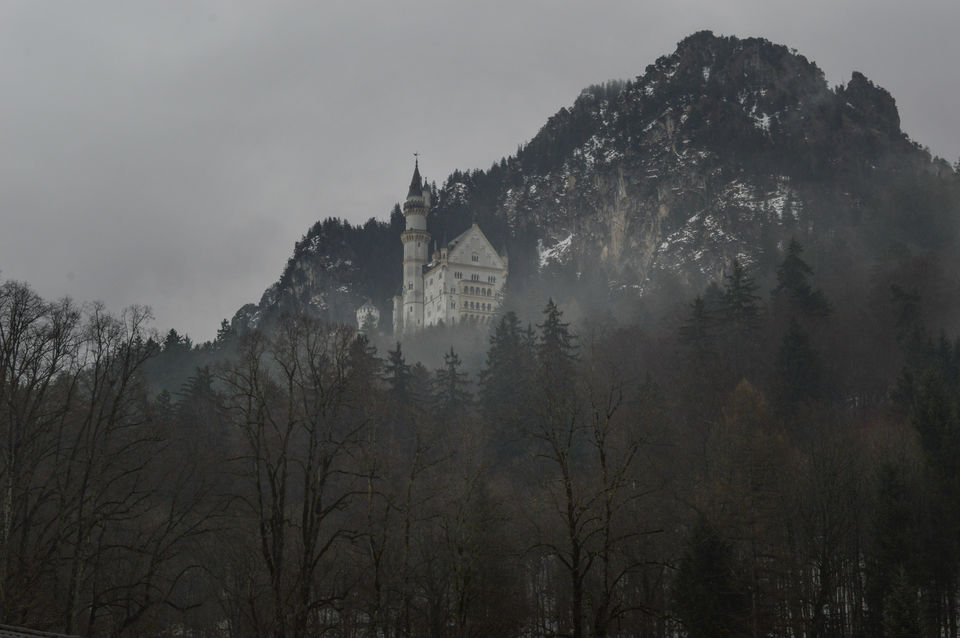 Its best to keep this day trip on a weekend as the Bayern pass (27 euros) offers an early start on the unlimited number of trains that you may take around the region until 3 am, next day. (On weekdays, you wouldn't be able to start until 9 am. But given that the sun doesn't rise until late, you might as well wait patiently :P) After buying my pass from the information centre at the train station, I kick-started my journey on a Wednesday morning from the Munich Hauptbahnof station. Mind you, they are better advisors than the tourist centre in the main city.

Cradled in the Bavarian alps. Hohenschwangau! 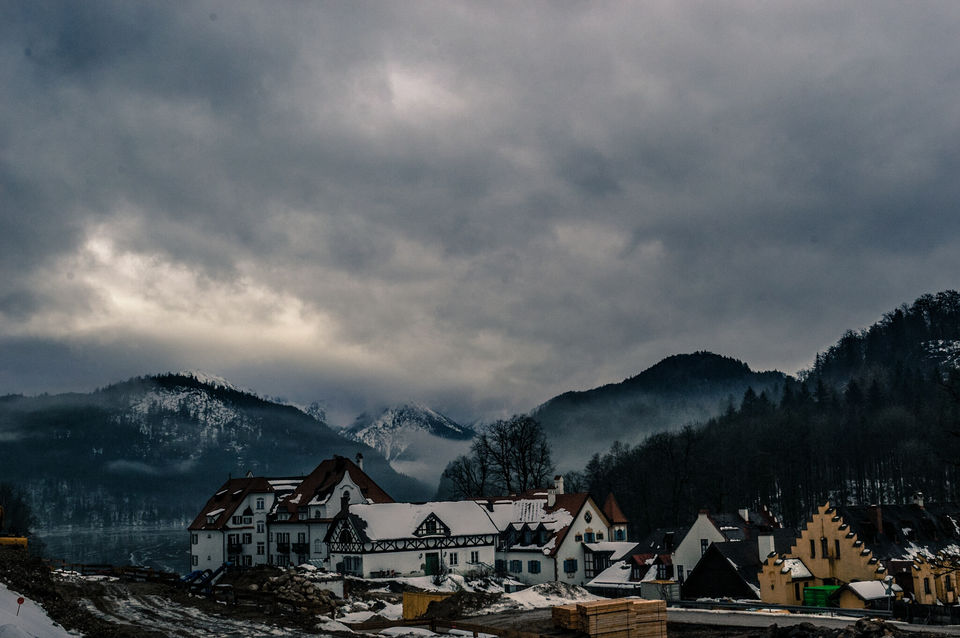 When you feel taller than the tallest of trees! 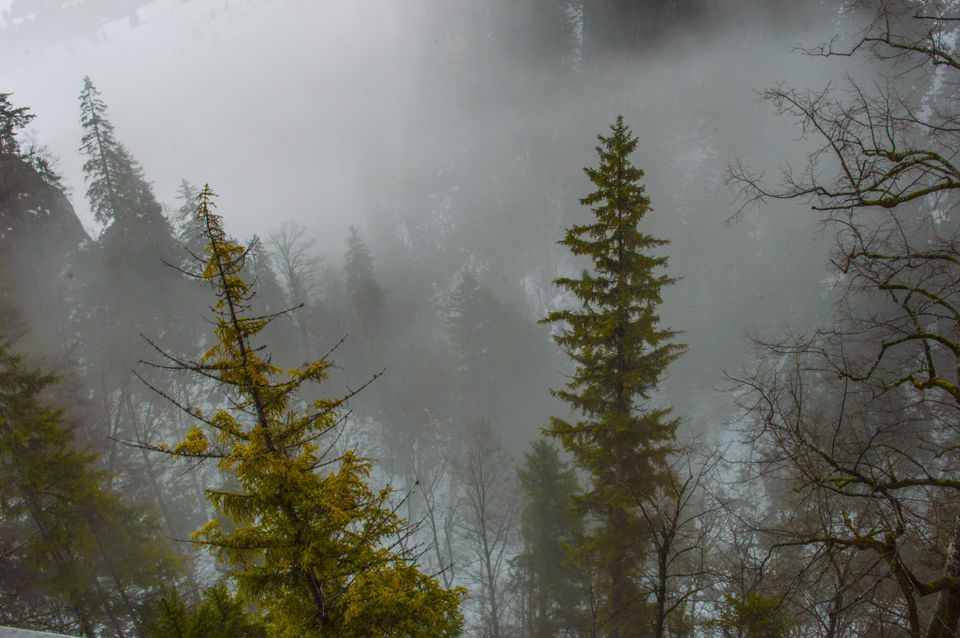 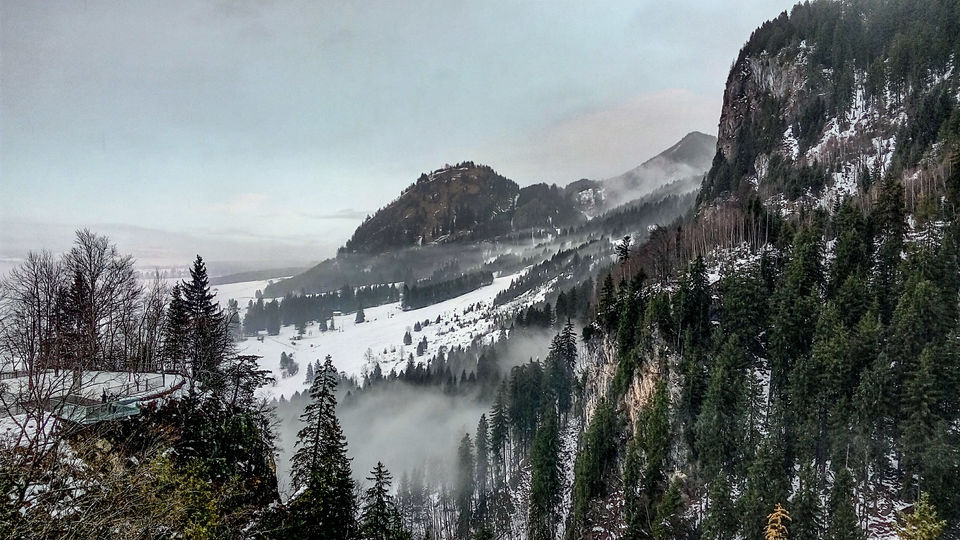 Originally my plan had been to spend the day hiking up to the castle and wandering around the village. But it was when I met Mariah on the train that I learnt about some beautiful lakes near the village. Since my Bayern pass also covered the local buses in Bavaria, I had no reason to worry. Mariah was on her way to meet her dentist that day. When she showed me pictures of how Hohenschwangau looked in summers, I made a mental note to come back. She told me how she missed living in the little paradise. It was also the reason she had taken the train that day. To sit back and relish the views that the two hour ride from Munich had to offer. But it was when we finally reached Fussen (the train station closest to the castle), that I actually appreciated Mariah's thoughts on why she missed the place so much. More so, when I boarded the bus from Fussen to Hohenschwangau. (The bus station was just outside the train station. Honestly, European countries are SO WELL PLANNED. And Germany, was certainly among the best!)

Lead me away to the little wooden house in a dreamland :) On the way to Hohenschwangau! 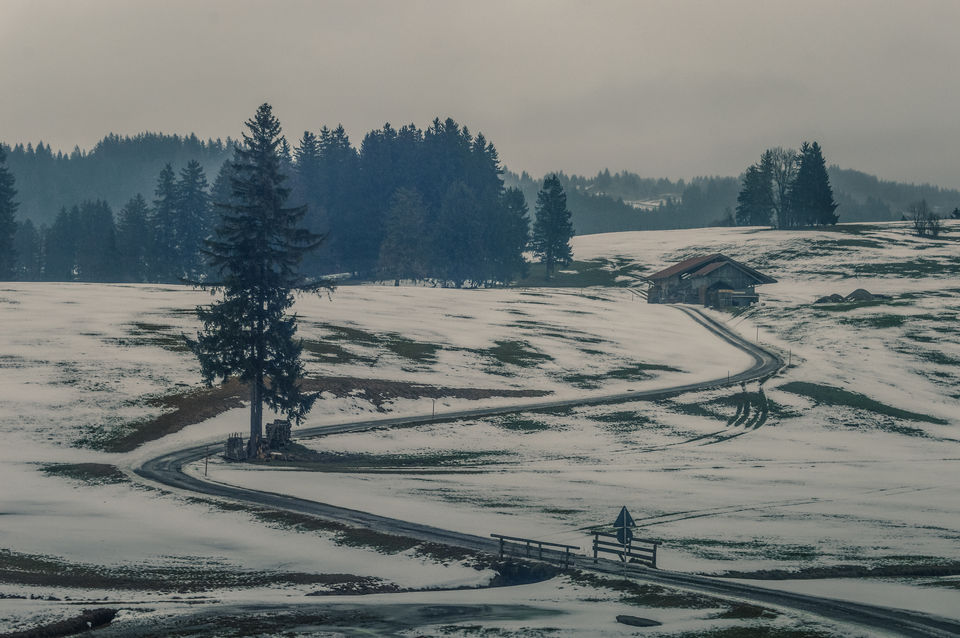 Another one from Fussen to Hohenschwangau :) As the bus headed into the village, mighty snow mountains loomed on all four sides of the extraordinarily pretty Hohenschwangau. Widespread white fields stretching on forever, wooden huts with snow-clad rooftops, frozen rivers thinning down to streams and trees that disappeared into mist midway, every little detail had me spell-bound. In the distance, I could see Schloss Neuschwanstein standing tall, disappearing in and out of sight with the swirling mist. But I wasn't content with just a glimpse and so, I decided to hike to the castle. Even though it was a steep 40 minute climb, it seemed like the best way to explore the village. Narrow roads winding themselves around the hill under the dense canopy of tall pine trees, offered amazing views of not just one, but two castles. Besides the Neuschwanstein, there was also the Hohenschwangau castle itself. (You can even ride on a horse driven carriage to the hill-top. They are as cheap as 6 euros both ways!)

Once at the hilltop, I spent my time doing the obvious. Clicking pictures of the breathtaking panoramic views and the castle. But it was along the way that I discovered surprises that I had anticipated in the least. Lean jets of water trickled from here and there in the hills, freezing to a sudden stop in some parts. I need far better photography skills to show you. Nevertheless, here's a shot that I managed.

The alpine secrets, flowing away in places and freezing to a halt in others. 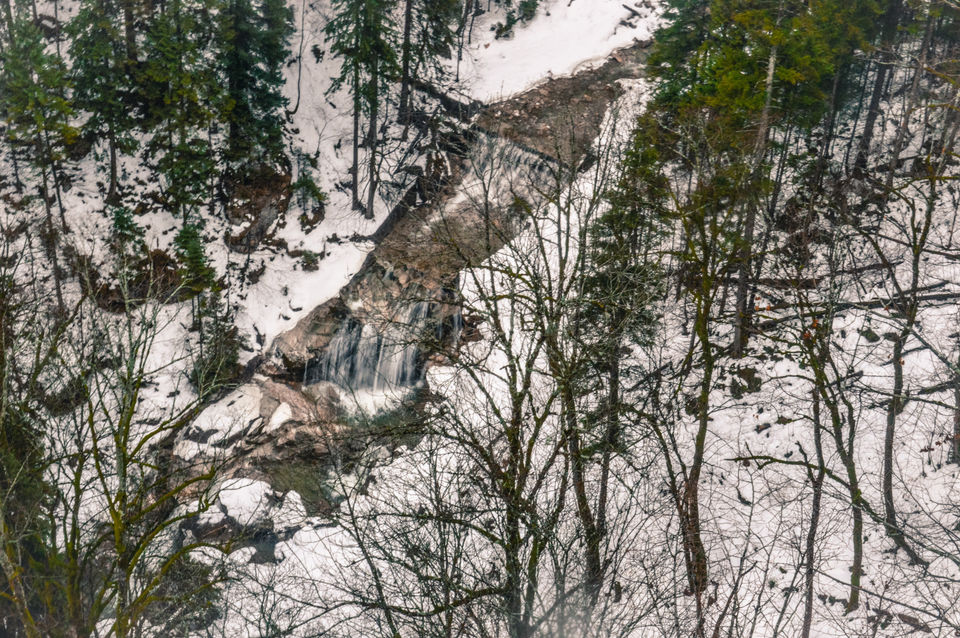 What came next was another wonder of nature. The frozen Alpsee. It was a 15 minute walk from Hohenschwangau. I could see cracks beginning to form on the glassy ice-covered surface of the lake. After all, spring wasn't far away.

Notice the cracks spreading across the icy surface of the frozen alpsee! 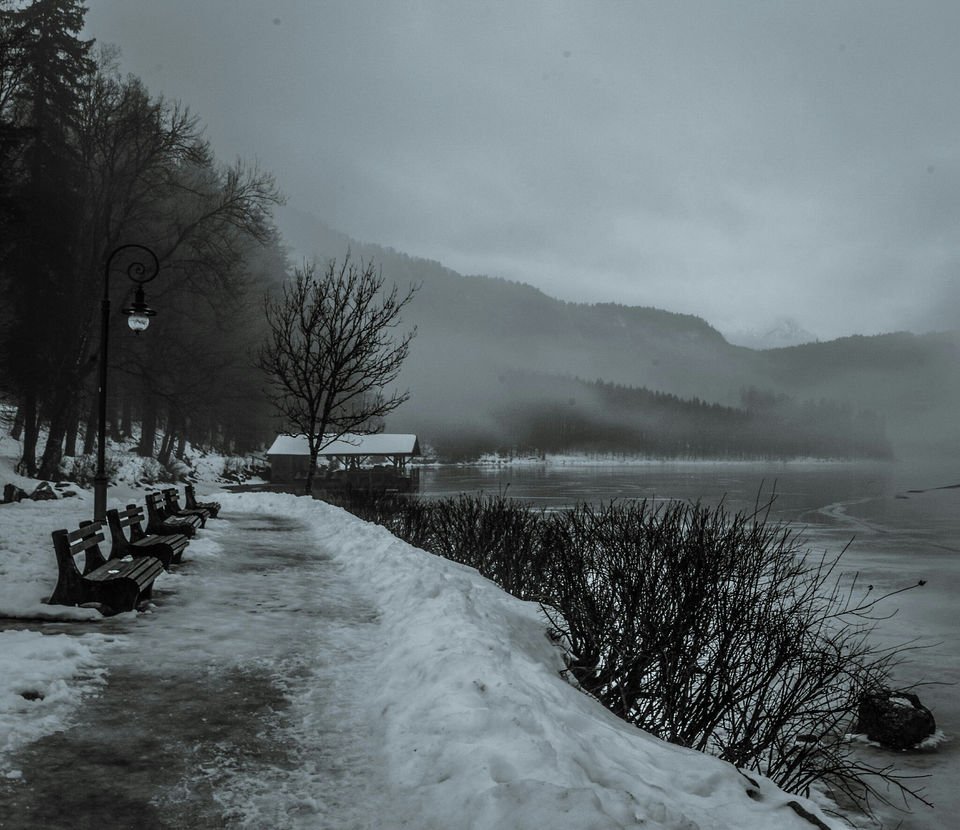 The 4You Hostel Munich

I had a great day, but it was grey and bleak. The last thing I wanted was for me to get caught in a snow storm. Fortunately, I escaped with a few spells of afternoon rain. But had my wish come true, I would have missed out on a most wonderful natural phenomenon. Alas, after I boarded my train back to Munich at 5 pm, the mist started spreading fast and I could see a snow storm in the making. Enticing as it was, it also cleared some clouds, allowing me to immerse myself in a Bavarian sunset. It took me 5 minutes to walk from the Hauptbahnof to the 4 You Munich Youth hostel that night. What a day! Truly blissful for two reasons. i. Replaying the day's events in my mind, I slipped away into a deep dreamless sleep. ii. I only paid 12 euros for my bed+breakfast in a 6 bed dormitory :P (Don't worry about dinner. The hostel is literally in the heart of the city!)

What a beautiful natural phenomenon to witness. A wild snowstorm followed by the calm Bavarian sunset! 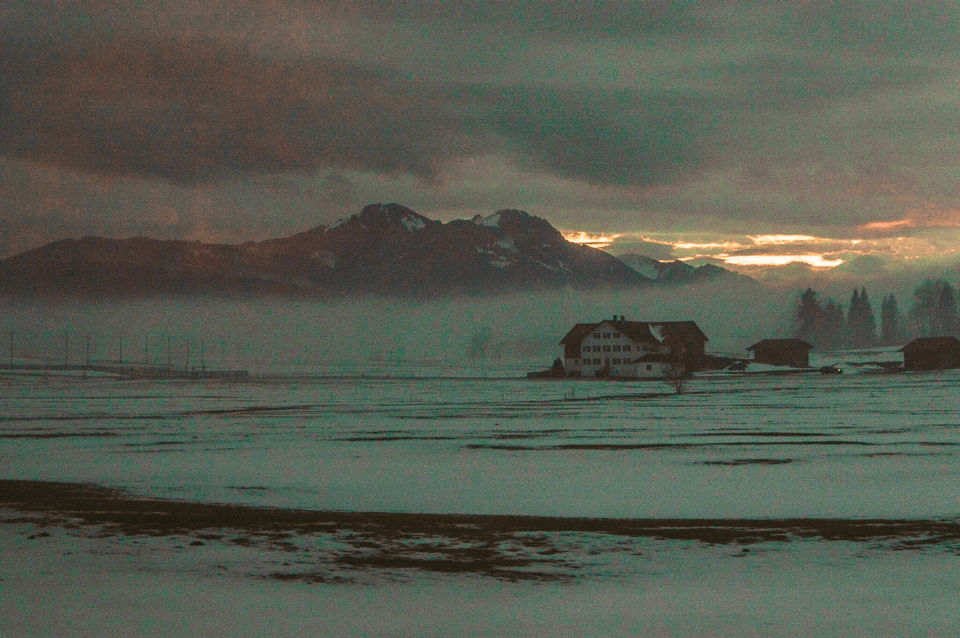 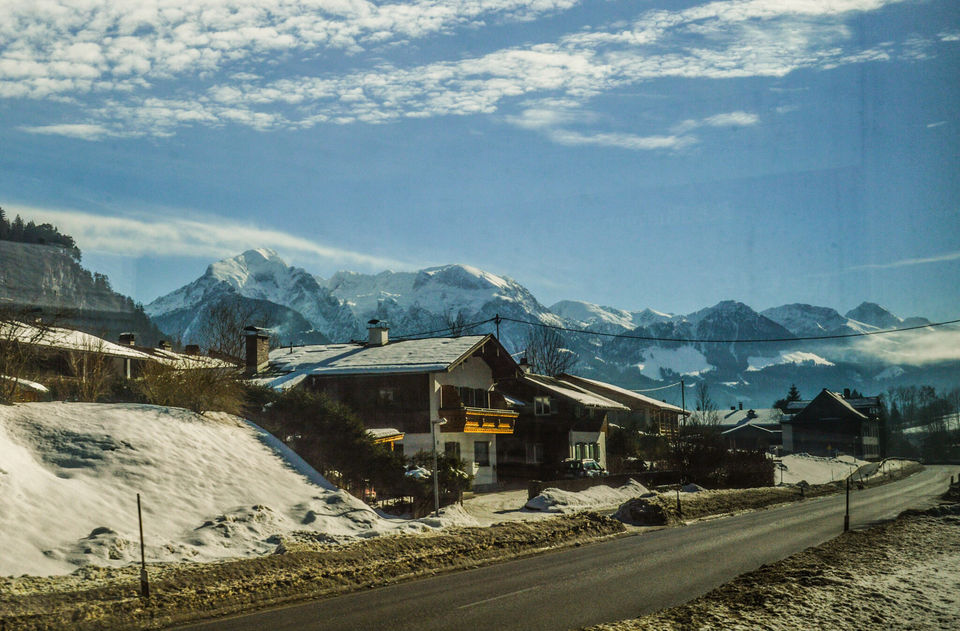 Another scenery to frame :) 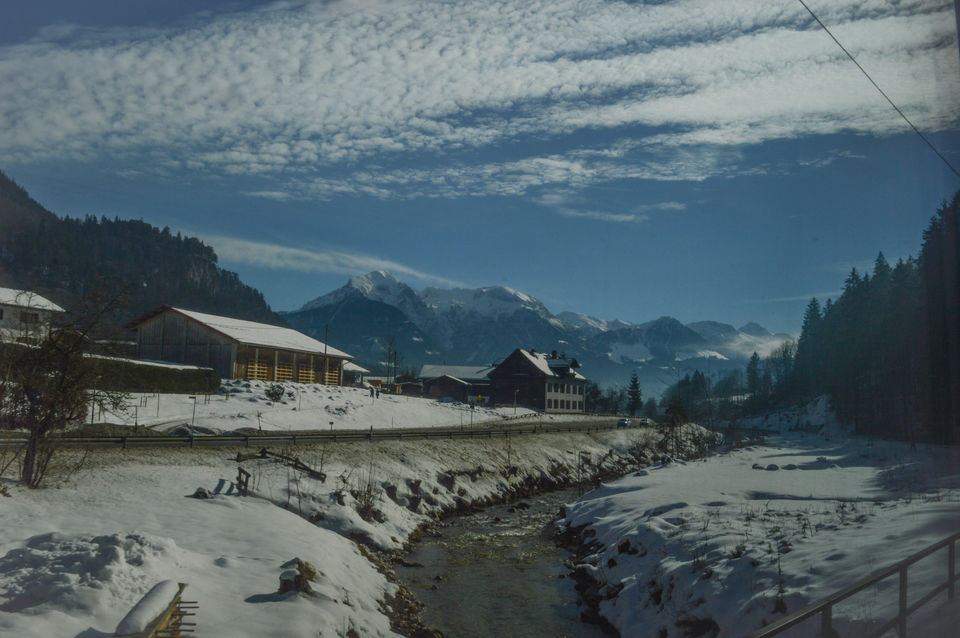 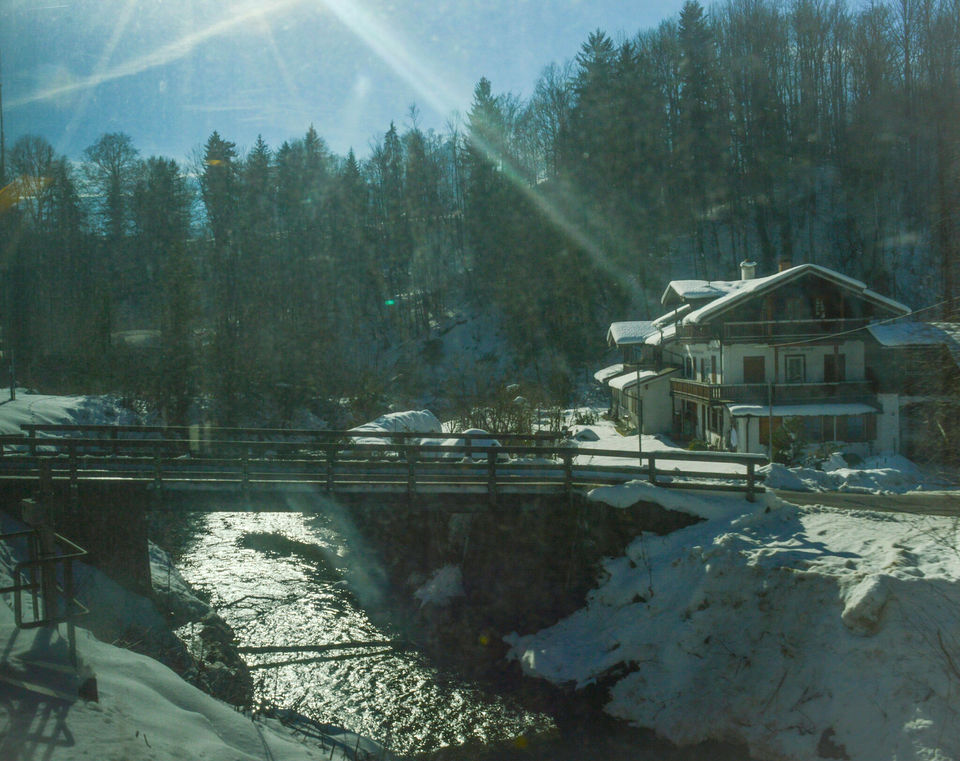 Next morning, my legs were sore. But the bright sunshine that streamed in through my window was enough to prepare me for another adventure in the Bavarian alps. I did away with the Bayern pass again. The Berchtesgaden village, home to the deepest lake in Germany was my next destination. Known for its blue-green waters, I knew I was going to be disappointed by the freezing temperatures at the Konigsee lake. But it was one beautiful train journey to Berchtesgaden, across other enchanting alpine villages like Rosenheim. The train whizzed past ranges of snow mountains. With the big French windows offering gorgeous views of the hills that rose on both sides of the narrow gorges, I could hardly bring myself to sit down in one place. Enraptured, I kept shifting from one seat to another.

Alpine villages like Rosenheim, as seen from the train. 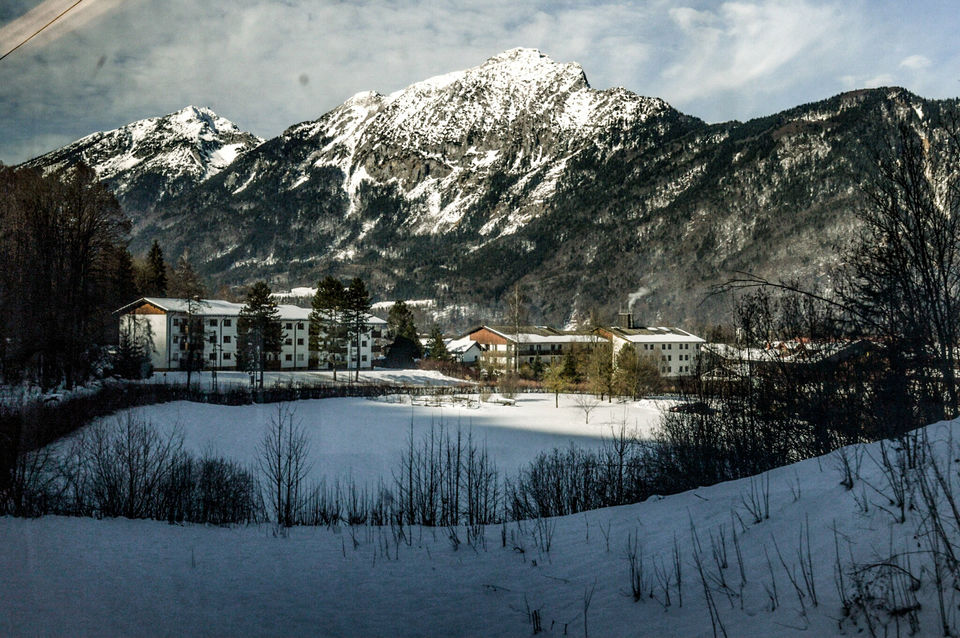 Another enchanting stretch of the Bavarian alps. 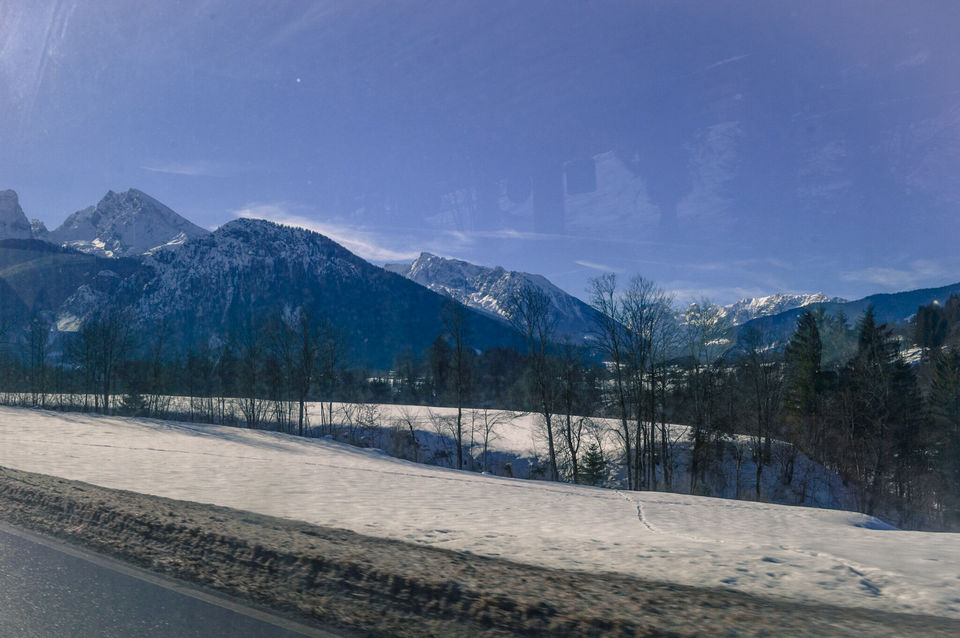 The bus ride from the Berchtesgaden train station to Konigsee was just as captivating (Again free! Thanks to the Bayern pass). Also I was overjoyed to find that unlike the Alpsee, the Konigsee lake had started to de-freeze. In parts of the lake where ice had melted away, ducks swam happily in the crystal clear water. Just as joyously, I took a long walk around the circumference of the lake, admiring it from different angles. 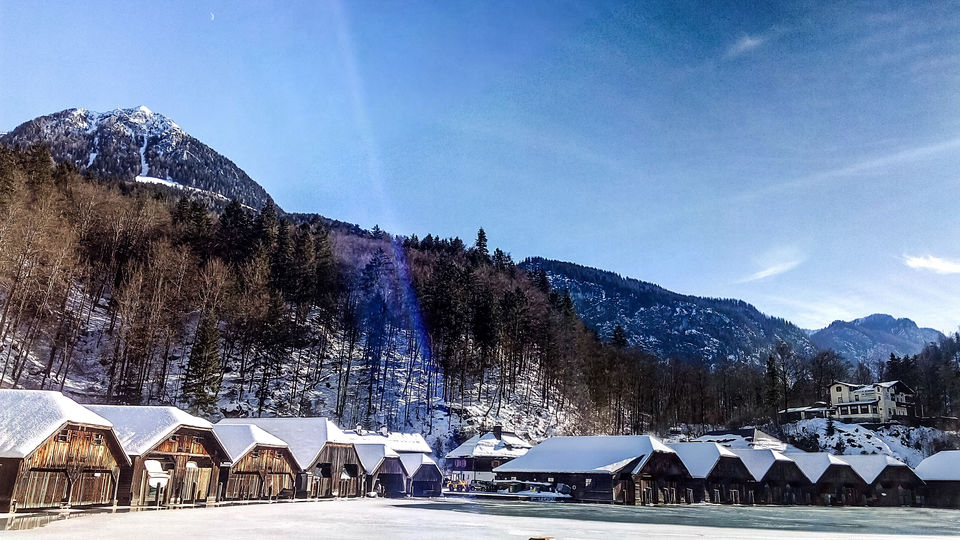 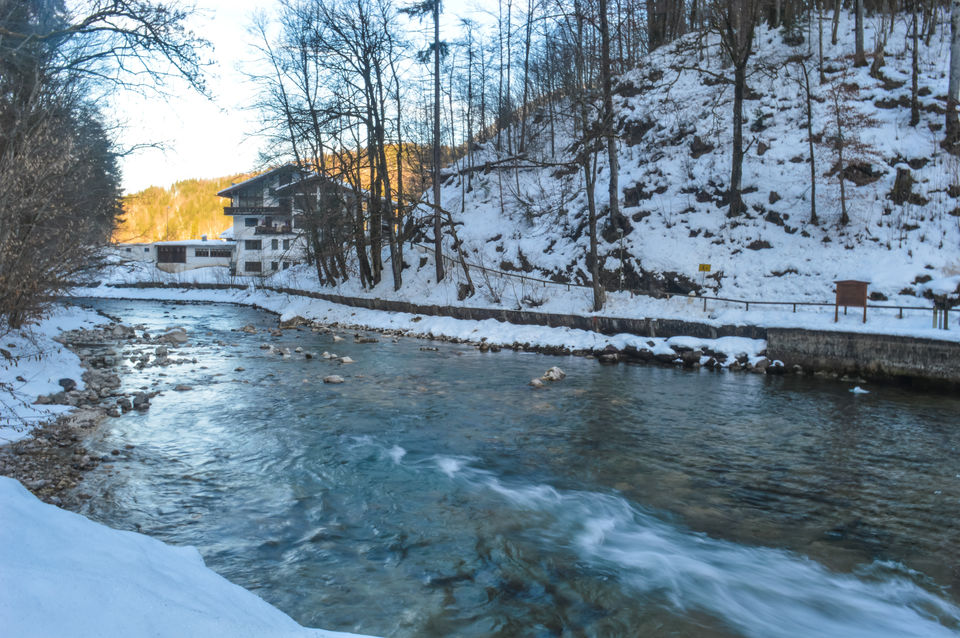 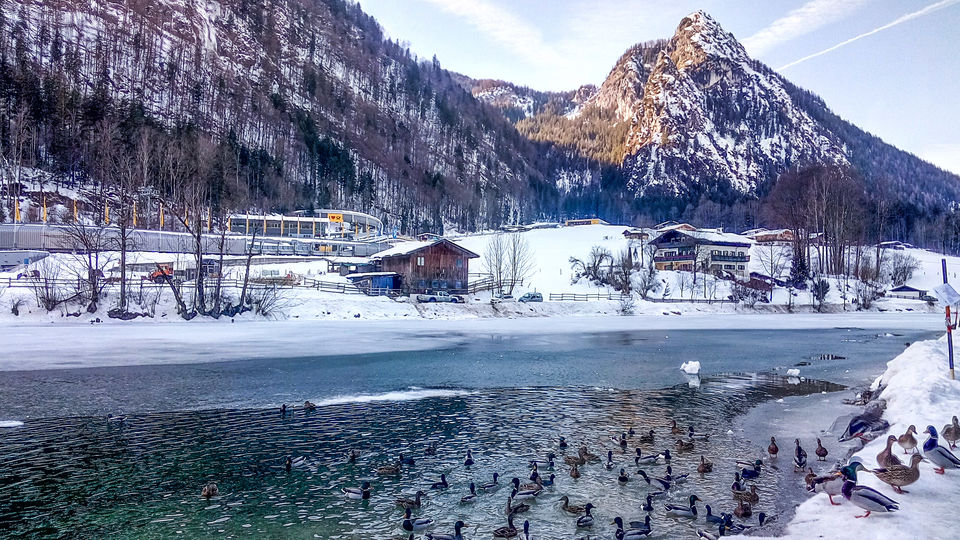 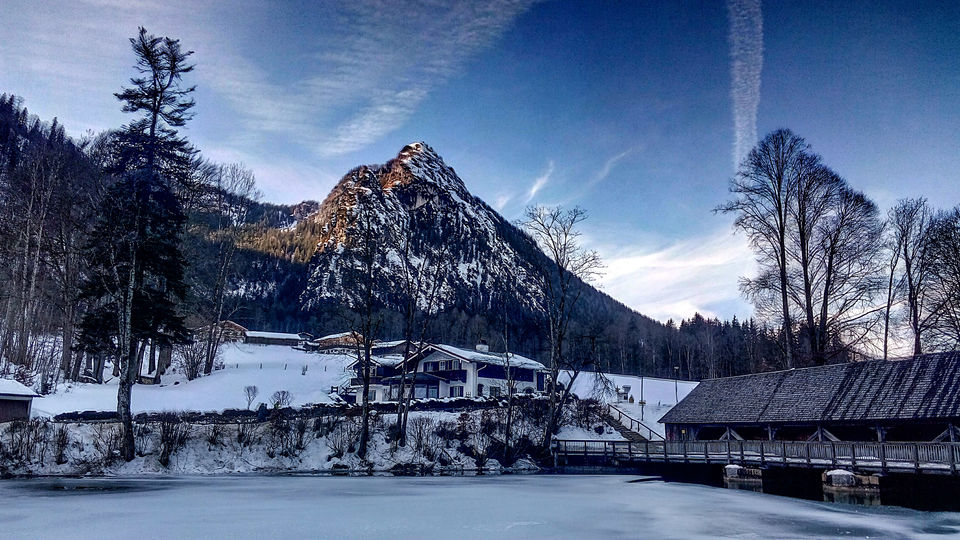 Afterwards, I spent the afternoon in the village. That day in Berchtesgaden, I felt closer to the mountains than ever before. Enough said. I will let the pictures do the rest of the talking. As another eventful day came to an end in Bavaria, I boarded my bus to Salzburg. (Tchuss, bye! :) ) 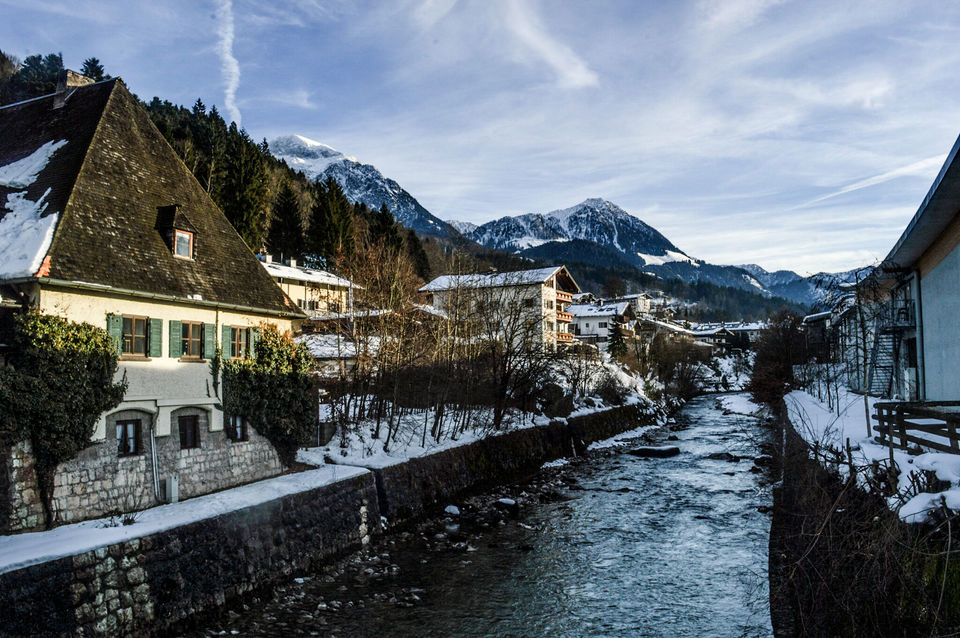 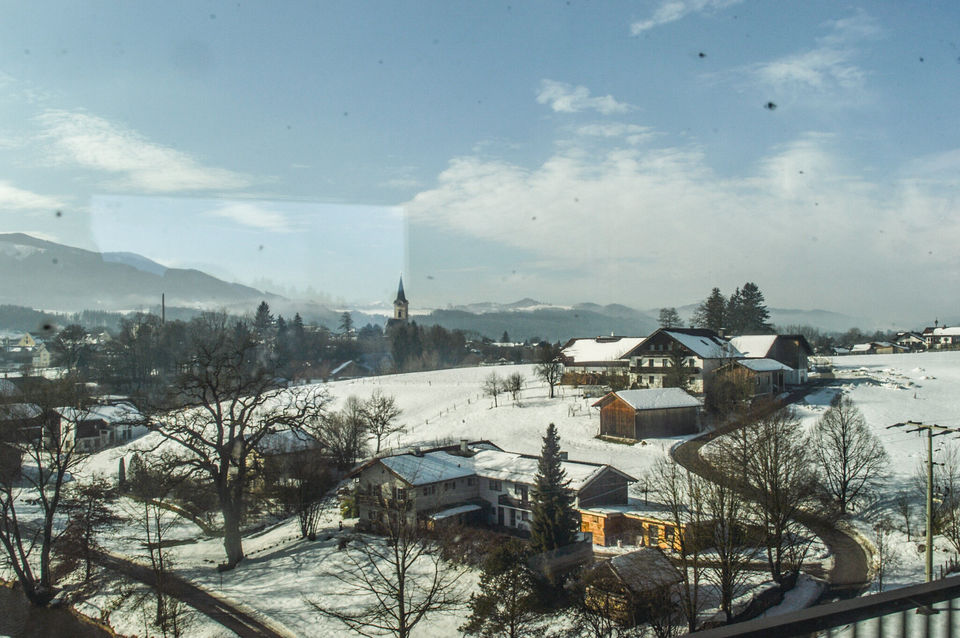 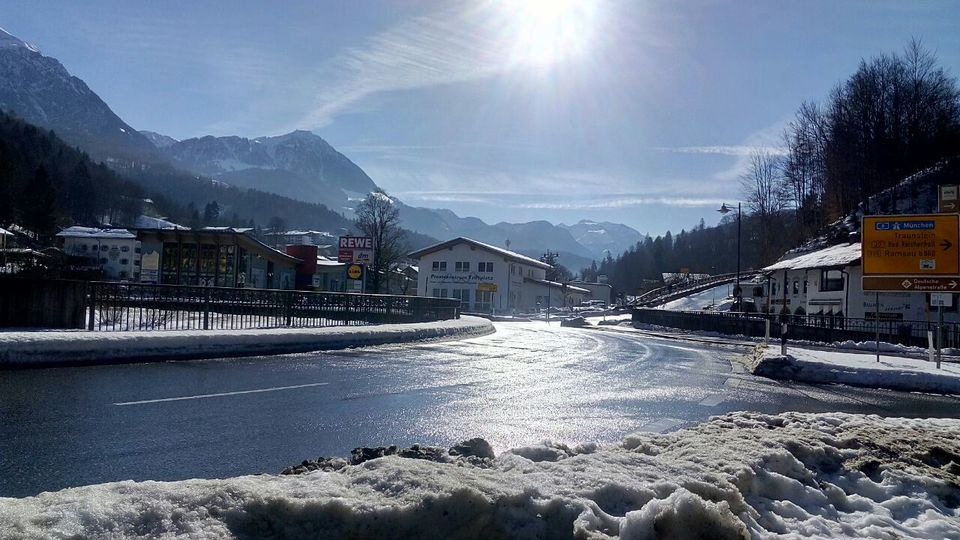 Look out for my next article on what I did on my third day in Bavaria after I got back from Salzburg. Just so that you don't have to keep guessing the budget until then, you can be assured that it was the Bayern pass that did the magic once again! :)

You can also watch this not-so-great video shot while walking around the half frozen Konigsee. It was way too cold and I could barely manage to hold my phone straight!