Finished up the final day in Zagreb and jumped on the train to Munich, Germany.  550KM and an overnight train via Slovenia and Austria, joined in a sleeper cabin with a bunch of Aussie girls about the start their buasbout tour.  Apparently they were staying in a massive tent city, something that I could imagine being pretty messy during the largest beer drinking event in the world.

Managed to organise my last minute accommodation on the floor of kiwi paintballer Liam’s flat in Munich, joined by 8 others (it’s a 1 bedroom place so it will be cozy!) in the last few minutes of SIM coverage before leaving for Slovenia, as accommodation in a shit hostel was starting at around 200 euro a night on the hostel bookers app (though hostel world was showing 30 euro in the morning – I don’t know what to trust).The trains arrive in Munich at around 6am, and of course shops don’t open until 8am in the station, so it was a case of spending a few hours watching the comatose Oktoberfest revilers sleep it off in the station.  Got hold of Liam and managed to negotiate my way through the S-Bahn (Subway) system after some help from Israeli tourists regarding tickets (I shouldn’t have bothered, but more on that later) and emerged in Toytown. Liam’s place was literally down the road from the nearest S-Bahn entrance, making it really easy to find. I dumped my stuff and we were off for a tour of the city, which turned out to be on Germanys National Holiday – Unification day, which is celebrated in one city each year, turns out this year it was in Munich, so crowds were even bigger than they normally would be during Oktoberfest. Checked out all the major sights such as the Glockenspiel in Marianplatz, which actually moves around like a grandfather clock on a massive scale.  This was really impressive. Crowds were huge and this wasn’t even for Oktoberfest.  Beer tents and people in Leiderhosen everywhere. We ended up in the English Gardens for some beers, chilled in the sun for a while before walking back towards the city.  On the way I saw something that finally explained the person I’d seen on the train in a wetsuit at 6am that morning – remember, Munich is land locked.

River Surfing on the Eisbach turns out to be a popular thing amongst the local surfing crowd, and you scan spot people there all the time surfing on a tiny piece of the river, lining up, jumping in on tiny boards, then bailing… over.. and over again. As we walked back we stumbled upon massive crowds, no this wasn’t Oktoberfest, but German Unity Day, which is this year being celebrated in Munich, Bavaria. Police and revellers were everywhere as people from different parts of Bavaria paraded in their local dress.  Which leads me to, of course, the local dress for Oktoberfest, which we (or at least the guys) didn’t partake in due to the enormous costs (and ridiculousness of kiwis and yanks wearing them).  It was a great way of spotting the locals and especially Australians.

You can pick the Australians by the fact that they are wearing the costume, but as they say “the cuffs don’t match the collar”.  They end up spending 100-200 Euro on the leather pants, shirt, hat etc, then finish it off by wearing trainers.  Any self-respecting German will be wearing proper leather shoes for their Oktoberfest drinking sessions. We waited until the next day to go out drinking for oktoberfest and were told to go to the Hacker tent, which was the “Party” tent that the locals attended (whereas the Hoffbrau tent tents to me more US/AUS tourists and the bad kind of rowdy).   We had to get up at around 7am, for the tent to open at 9:30 am, and to get a decent seat.   To put it in perspective the guys went the next day – a Saturday and didn’t even get in after leaving at 6am.

There are two lots of seats in the tent, the reserved tables on the sites that rotate out and those in the middle of the tent by the band.  These are the best to get, but also the hardest as you aren’t forced to leave then the next session starts.  Luckily for us we scored seats right next to the band, and were there literally from 9:30am – 11:00pm.  Literally a case out Survivor: Oktoberfest – outlive, outlast, outdrink. Beers are around 9 euro each, but expect to get kicked out or never served again if you ask for your change on a 10 Euro note, the tip is assumed, and they staff deserve it considering what they have to go through on an average day (carrying 6-10L of beer at a time, 10+ hours a day to thousands of drunken revellers).  Beers are on average slightly stronger to qualify as an Oktoberfest brew, and come in one size only.  Most of us went through about 5 handles, except for the one who shall remain nameless who thought it was a good idea to stand on the table and skull his, to the cheers of a few thousand people.

Which was of course a great idea, until he comaed out the table.  You see, excessive drunkenness, dancing on tables and underage drinking are all tolerated at Oktoberfest. There is however one thing that is not tolerated – falling asleep on the table!

To give an idea of how important it is to arrive early – my friend Anna travelled over from Karlsruhe to meet me, and arrived at around 3pm.  She was literally at the front of the queue to get in for 2 hours and kept getting told just 20min more to get in. End result – I ended up bribing the security guard 50 euro to let her jump the queue as without this she’d have never gotten in.

About 130-150 Euro later it was 11pm and time to go home, though in our drunken minds it felt more like 4am.  Locals were passed out all over the place, and well, discretion was the better part of valour.  For me, one day was enough, but I’d definitely recommend visiting Munich during Oktoberfest – if you are planning to the following might be useful. 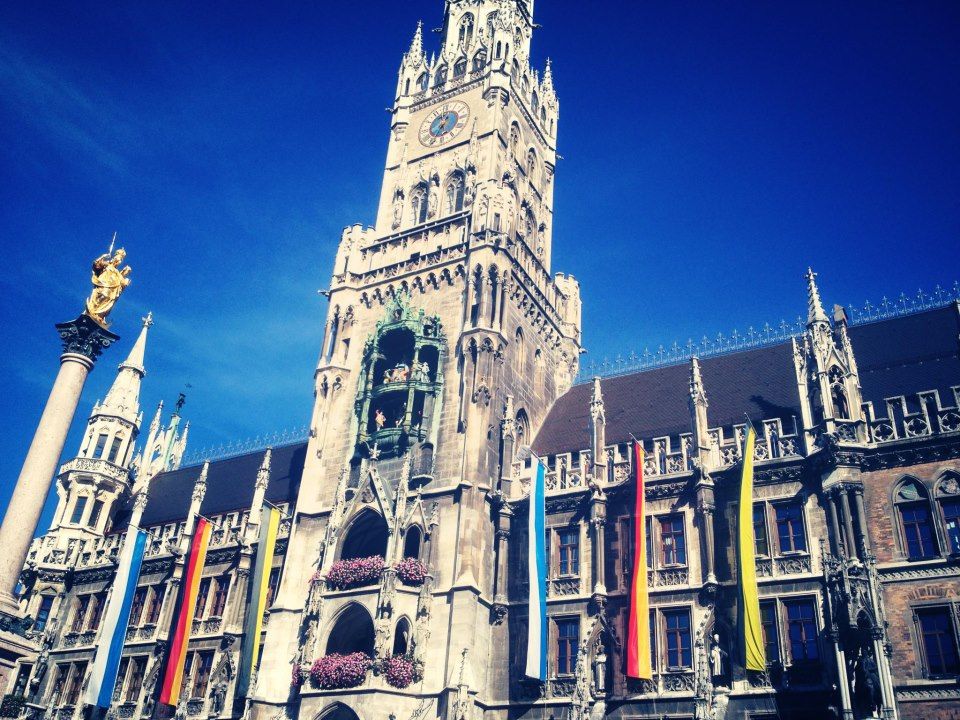 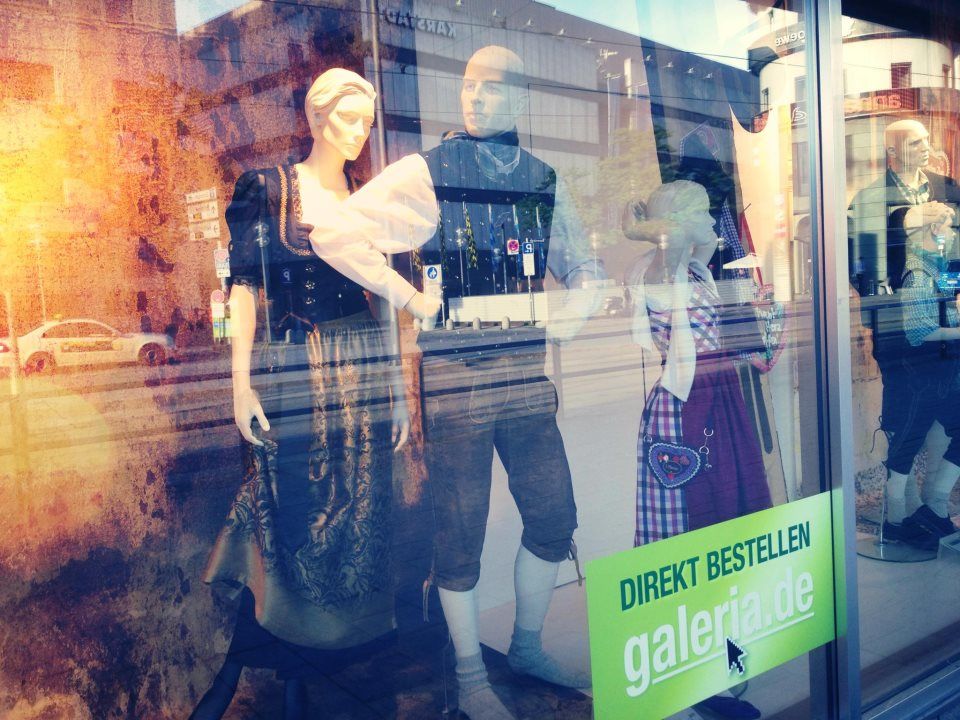 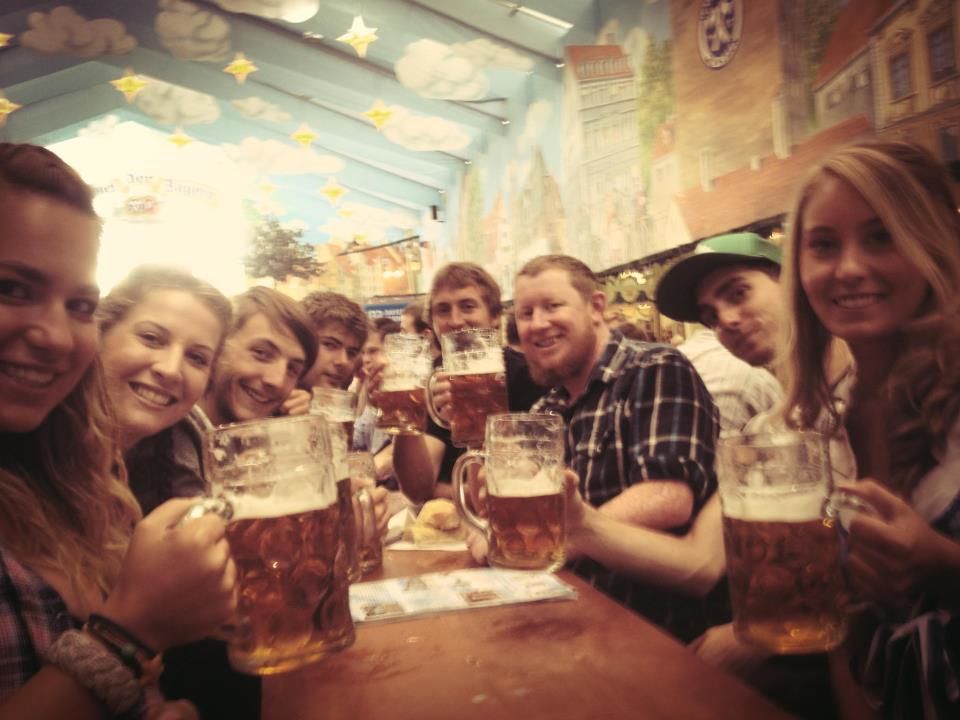 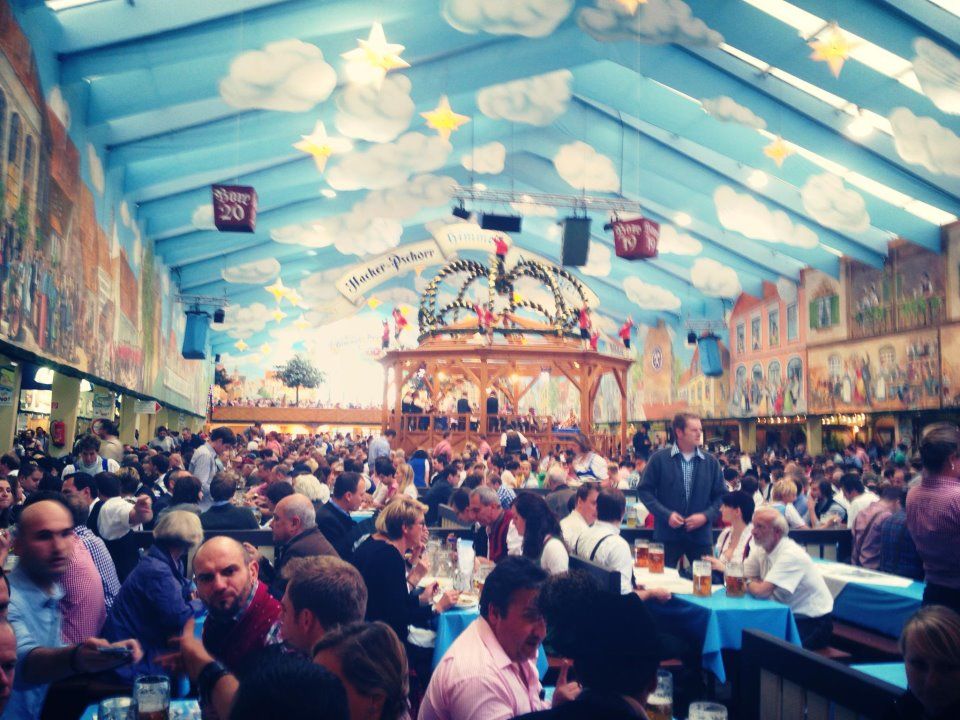