My date with the 17-metre Buddha of China

One of the huge Buddhas 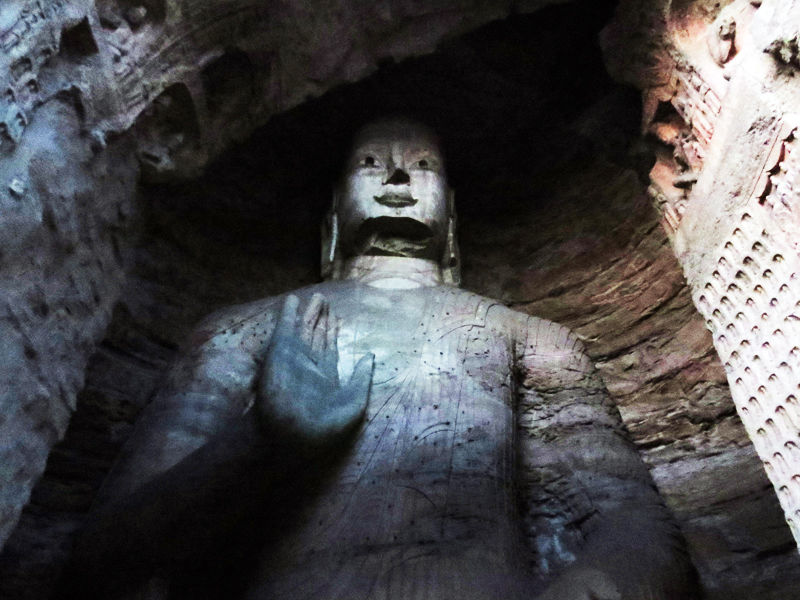 The path leading to the caves 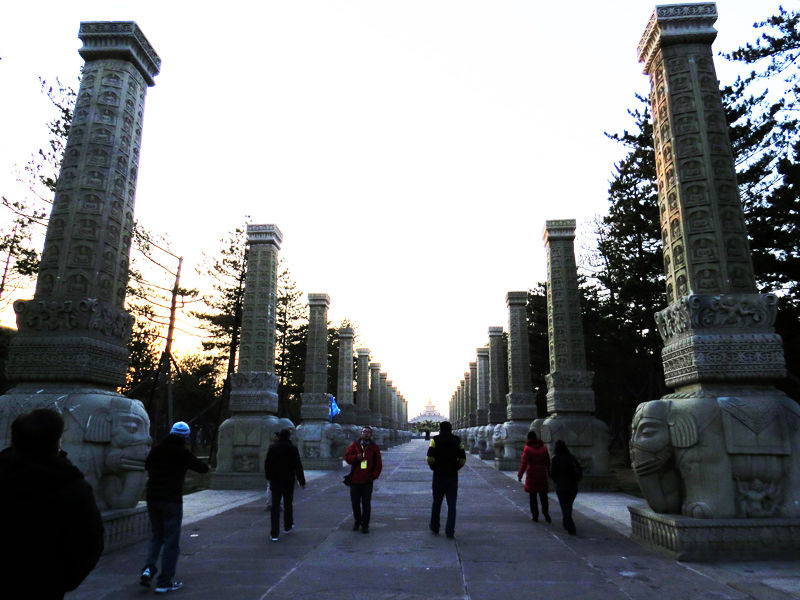 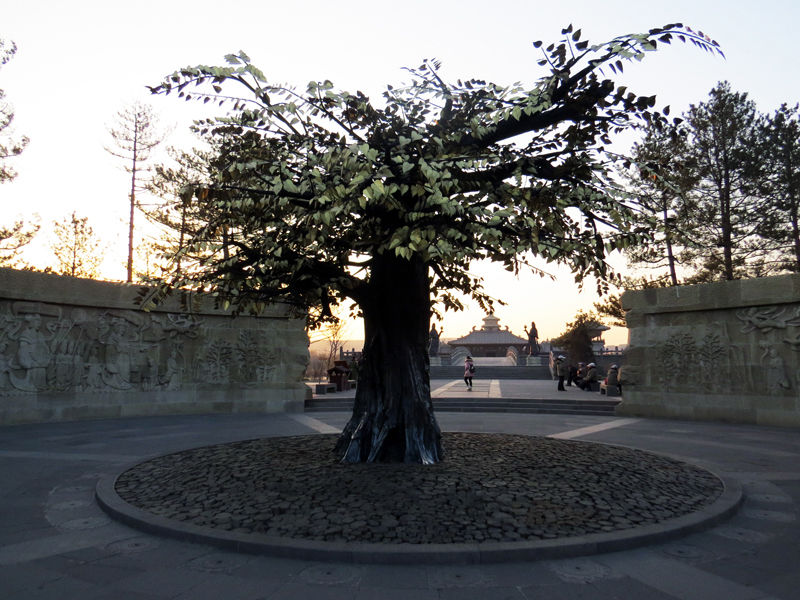 Murals around the Bodhi Tree model 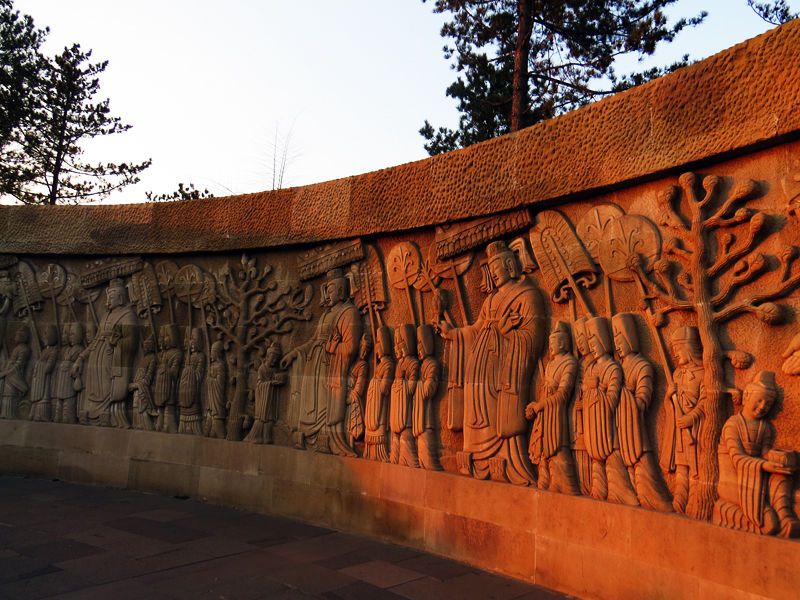 The caves are behind those pagoda-gates 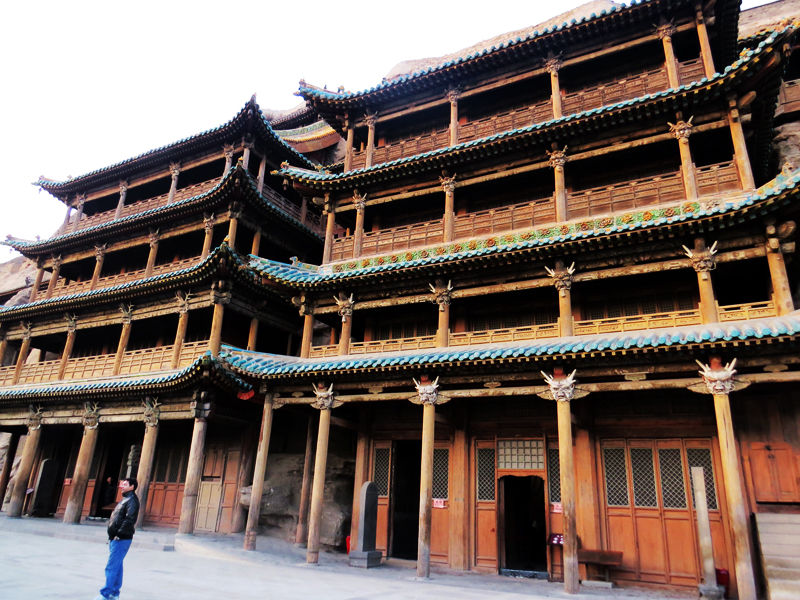 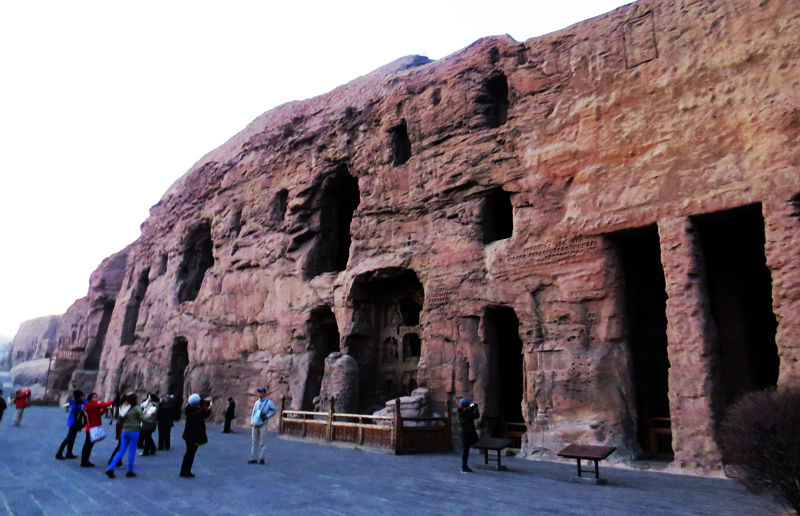 Carvings on the rock 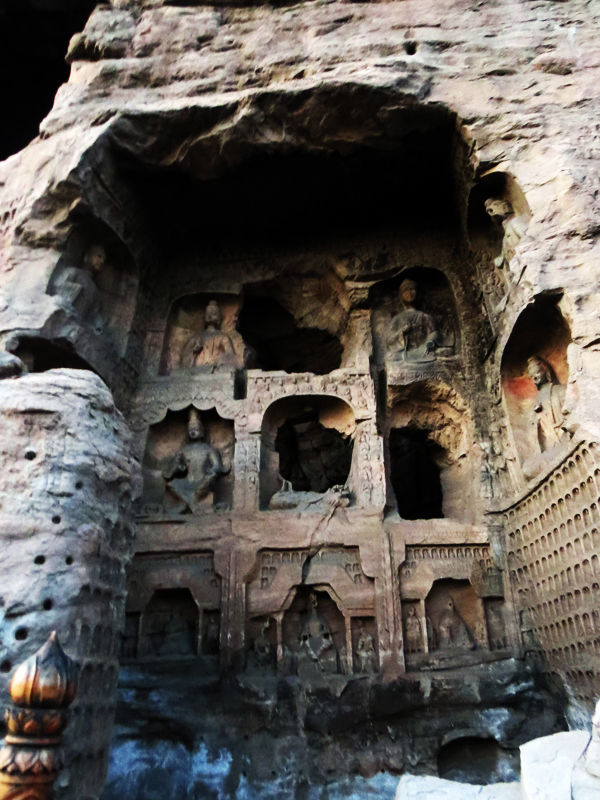 The caves are full of carvings 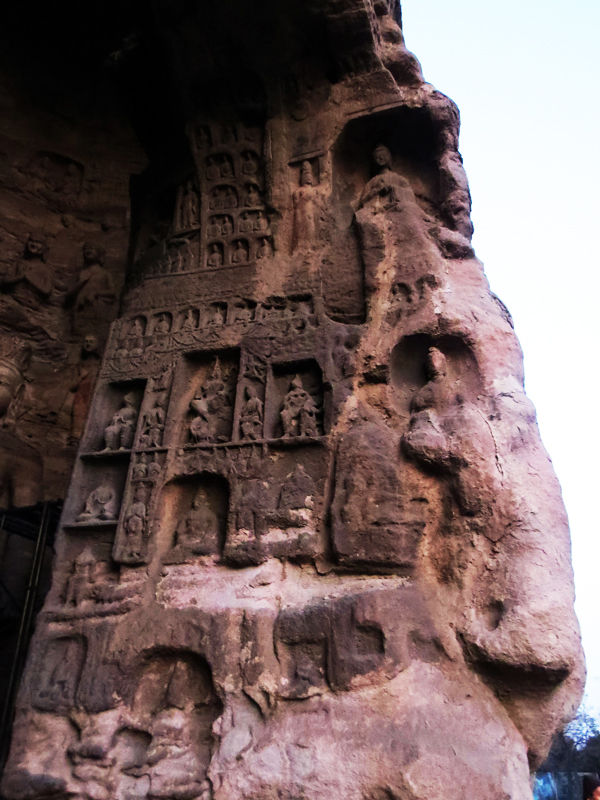 Compare the statues with the man. Got their size? 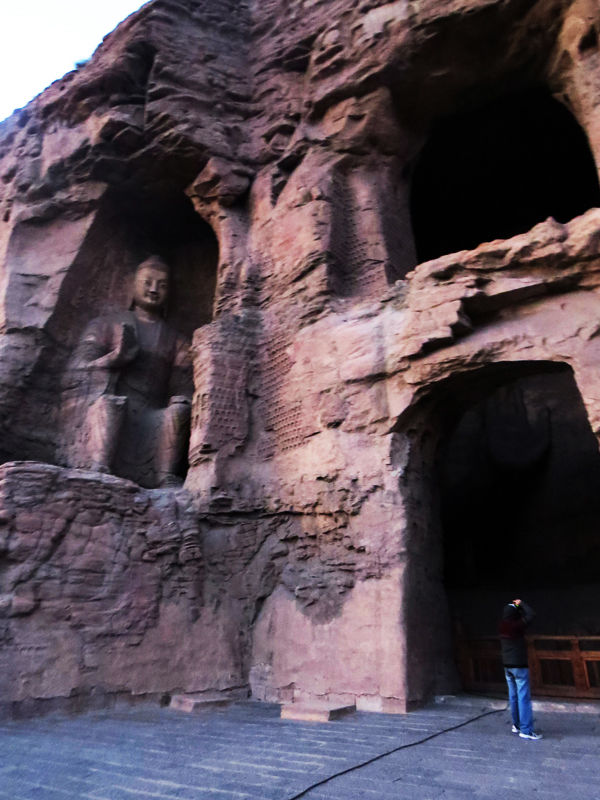 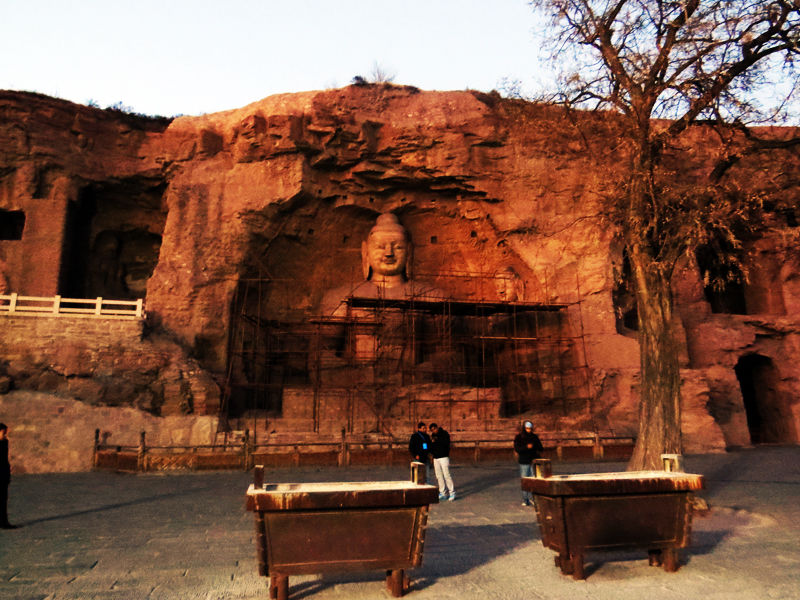 It was late afternoon when our bus rolled into the parking lot outside the Yungang Grottoes complex. The sun was already casting long shadows of the parched poplars lining the roads, making me anxious about the prospect of photographing the Buddhas.

My research ahead of the China trip had told me that the grottoes were the next best thing to look forward to in Shanxi after the Xuankong Hanging Temple, about which I have already posted (click here). The complex—a UNESCO Heritage Centre—is reputed to have 252 caves in all with 51,000 statues that reflect the first peak period of Chinese Buddhism art from the 5th to 6th centuries AD.

In a quirk of fate, Buddhism, which spread to countries like China, Sri Lanka, Cambodia and Thailand from India, flourished in these nations, but gradually lost out to Hinduism in India itself. Around 2,000 years back, missionaries from India took Buddhism to China and cave art like those of Yungang came around 500 years after that. For me, it was like seeing a reflection of my own country in a different geographical as well as historical zone.

Inside the complex, a neat path with a row of 13 beautifully carved pillars on either side takes visitors to a model of the Bodhi tree, under which the Buddha is said to have attained enlightenment. The path goes around the tree and surrounding it are two curved ‘walls’ on each side, adorned with murals depicting slices of the Buddha’s life. All these are, however, recent additions.

From there, battery-operated cars took us further inside. The short journey was quite pleasant, but by the time we reached the caves, light was almost gone. Behind a low inner wall and up a short flight of stairs, we could see some hills and some pagoda-like structures. But where were the ‘caves’?

As the clock ticked by, I grew more and more restless. The guide spoke English with a thick Chinese accent, which I found very difficult to follow. And now, he chose this very unfortunate moment to speak in detail about the grottoes, much of which made no sense to me whatsoever.

At the bottom of the stairs were the Chinese guardian lions. The male has a pearl under his paw while the female has a cub under hers. A climb up the stairs brought us outside the pagoda-like structures that seemed to be embossed on the rocky surface of the hills.

A further speech by the guide and still, no sign of the ‘caves’. And, the sun seemed to be in a particular hurry to go to bed that day. 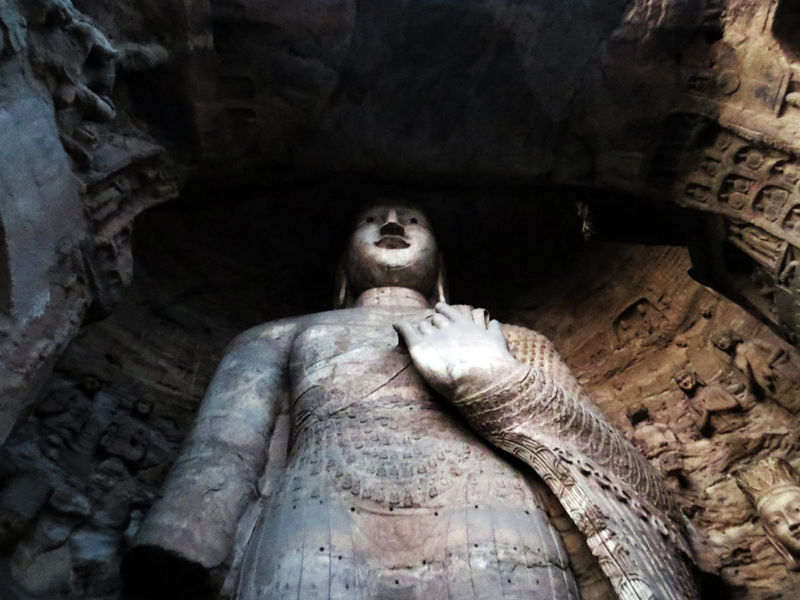 Finally, after what seemed like an eternity, he led us into the ‘pagoda’. The path was narrow, the interiors semi-dark and we were some 20-odd people walking into it at the same time. All I could initially see was something that looked like a massive elongated cylindrical structure placed horizontally.

Even as I got closer, I took me time to realise how big the statue really was. And a gasp of wonder left me automatically when I got the full view, for which I had to throw my head back as far as it could possibly go.

I had realised by then that the ‘pagoda’ we had seen from the outside is nothing but a gate that leads into a cave. And inside it, towering over us was the colossal statue of a rock-cut Buddha, sitting cross-legged. The ‘elongated cylindrical structure’—at least 5/6 metres in length—was nothing but the Buddha’s folded legs.

Sadly, we were not allowed to take pictures, not even without flash. We were told we could take pictures at the open caves, which were at the back. I knew that by the time I would reach those, the light would have been gone completely.

Anyhow, the guide told us that the statue in front of us was 17 metres tall. Quite a bit of its colour was gone. We were told that natural dye had been used to paint the statue, including gold dust, traces of which were still visible. There were two other big Buddha statues — at least 7/8 metres tall — on either side of the main figure, but were completely dwarfed by it.

The cave — number 5 — was packed with rock-cut sculpture. Depicting slices of the Buddha’s life, every inch of the walls, the ceiling and the columns around the statue was adorned with murals. The guide said the smallest Buddha figurine in the cave was merely 2 inches in height and pointed it out to us.

As he gave us a guided tour of the cave, telling the stories associated with the murals, I noticed that some of them had changed from what we know them as in India. Not surprising, given the 2,000-odd miles the stories had travelled. And, the guide referred to the Buddha as ‘Sakyamuni’, a name we are familiar with in India but do not use frequently.

The guide led us next to a couple of other caves that also had the pagoda-gates. The Buddha statues in these, too, were massive, but nothing in comparison to the first statue that we saw. Some of the statues and wall murals looked damaged — many of them very badly — and China is currently in the process of restoring them. A set of caves was closed to tourists because of that.

The pagoda-gates probably came at a later date (I’m not sure of this fact), though I personally would have preferred to see the grottoes as what they are—caves. This wish came true at the set of caves at the back, which are still in their original shape. We were told we could take photographs of these, though, as I had feared, light was nearly completely gone by now. But the massive statues of the Buddha — several of them over 10 metres tall — left us awestruck.