The Thing About Solo Travel 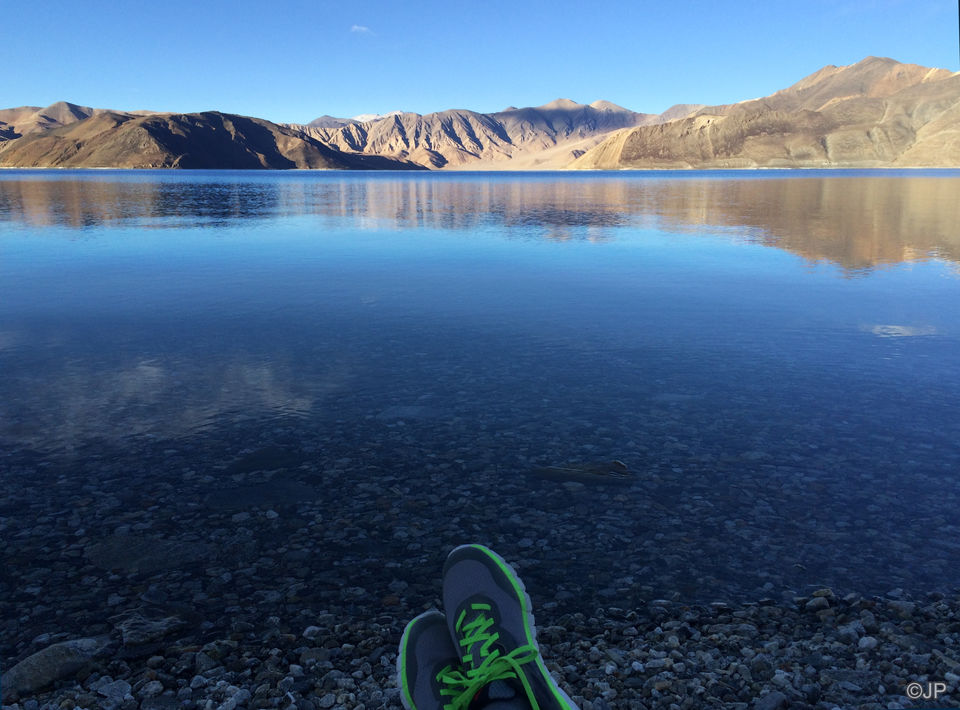 When you embark on a trip alone, a lot of things run through your mind. Having been brought up a city girl, with all my independence and social life in place like a neat puzzle – and then abandoning it all for 30 days in favour of the quiet mountains who prefer the sound gurgling rivers over hardcore EDM. The toughest part is taking the decision to go. The rest isn’t easy, but it falls in place somehow.

Here are a few tips to help you finally take that trip you've planned over and over in your head. 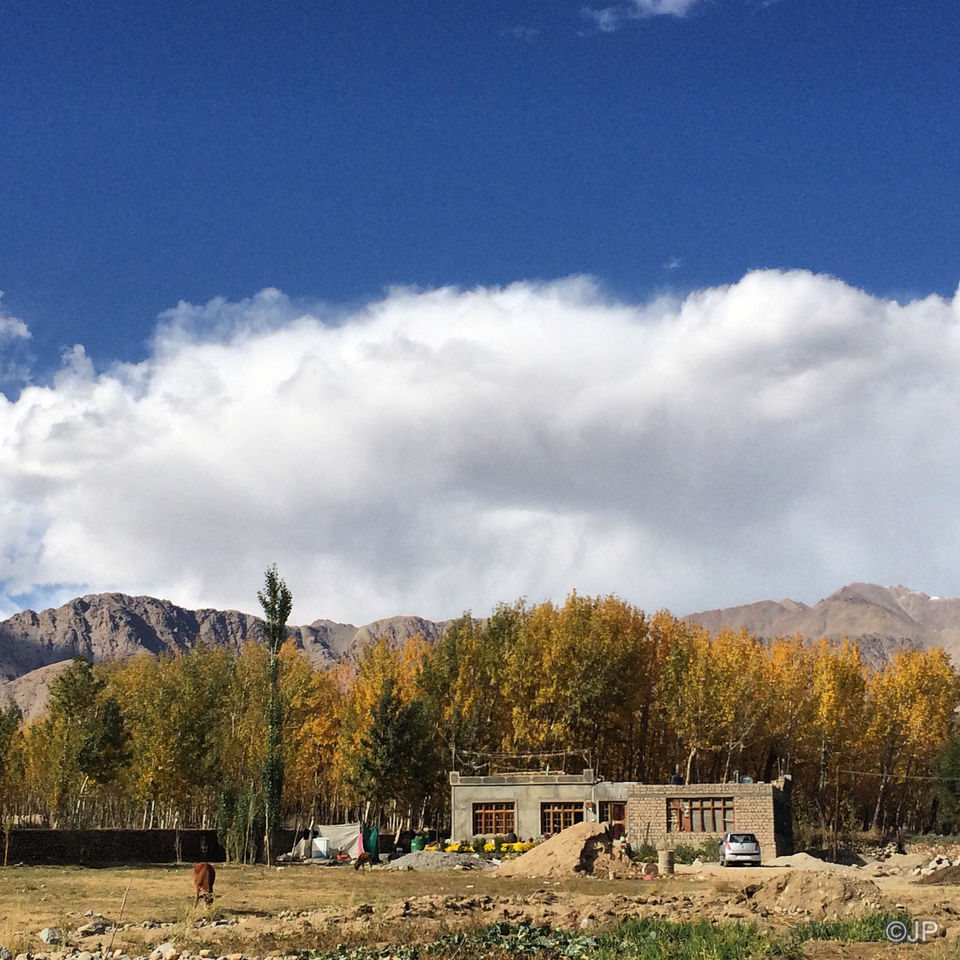 Be prepared to enjoy your own company

In a world where perfectly-crafted social media posts take up more of our time than deciding which pill we’re popping for an ailment – I found that the only way to find out what’s truly important is if we’re forced into isolation. The ability to be on our own is now a luxury. We’re often stuck in a rut, following the same Drink-Dance-ThrowUp-Repeat routine every weekend. We do need companionship, but often we crave it just to ensure that we don’t have to spend too much time with ourselves. While preparing to embark on your solo adventure, don’t underestimate how much you’ll enjoy spending time alone. 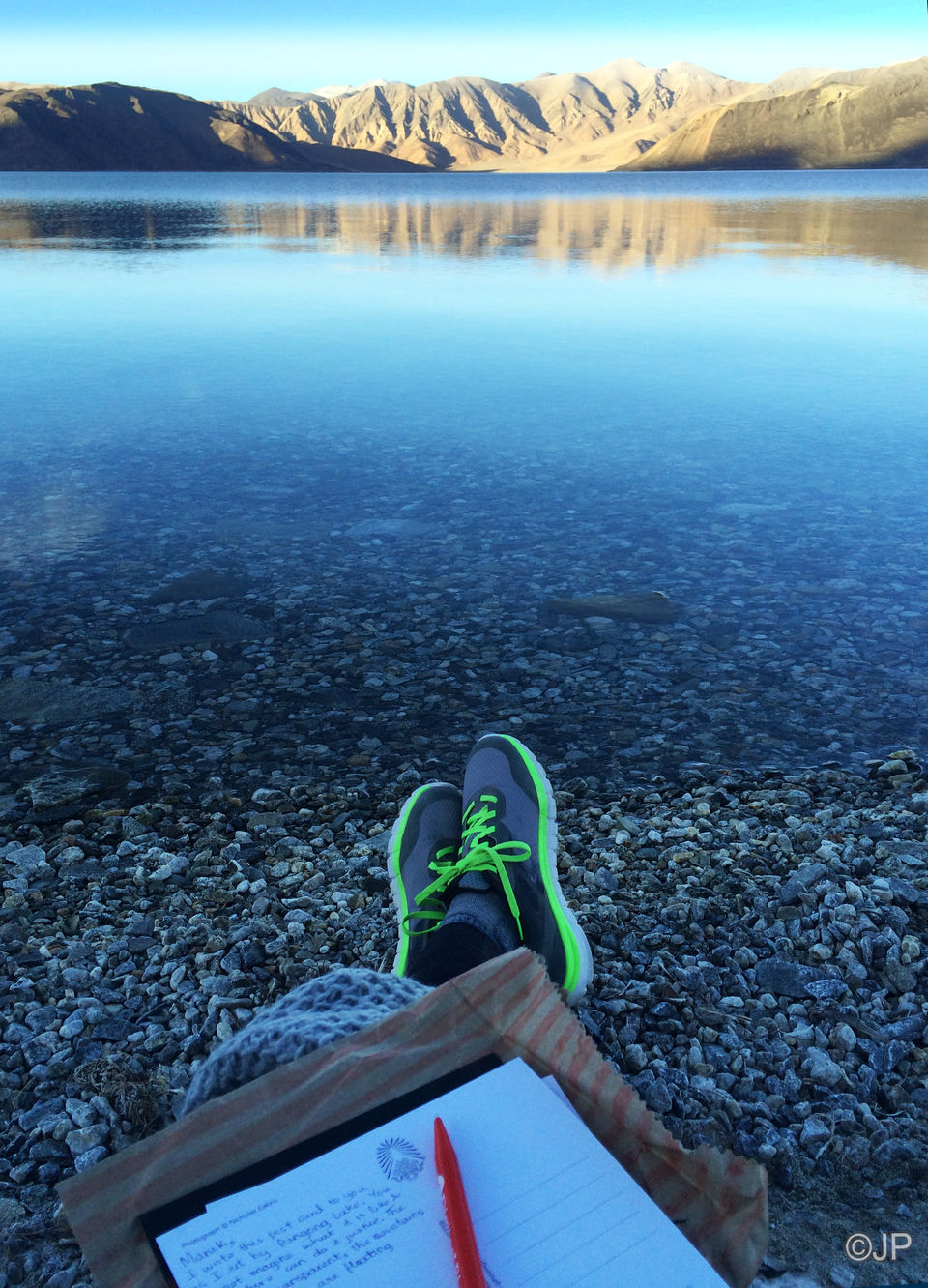 Solitude doesn’t have to be scary. @Pangong Tso, Ladakh

Here’s the thing about solo travel. It is no longer a good-to-have, but a must-have in life. This journey for me was never about “finding myself”. I have myself. I know her. But a lot of that self had been drowned out in the noises of the city, dissipated in the smog. Being isolated, in the middle of nowhere was a chance for me to get along with myself. And the minute that happens to you, you get along with everyone around you. 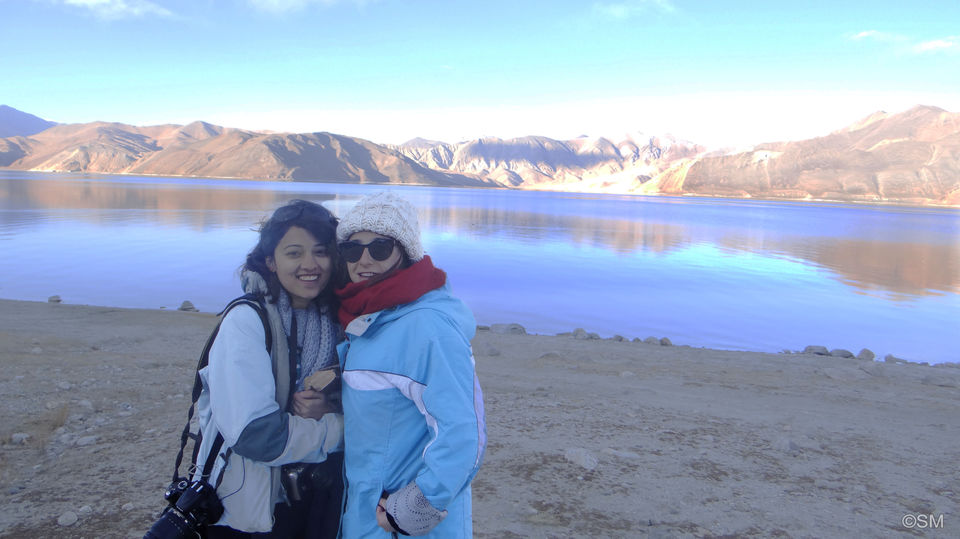 Travellers are the easiest to get along with. @Pangong Tso.

I didn't go to Ladakh with the expectation of making friends. Acquaintances, sure. I'm easily adaptable and open minded. But I don't find it easy to open up. The trick is to go to a place where you can no longer drown out that inner voice. Hear it out. You'll find a weird sense of peace flowing over you. No, it's not enough to fill in the hole the lack of Wifi (or any internet at all) leaves. You will find yourself checking your phone for updates, for any sign of activity at all. But slowly, you'll check it less. You'll prefer looking up and finding animal shapes in the endless stars. Having conversations with people from around the world, over a bonfire in the freezing cold. Hearing just the sound of the river accompanied occasionally by Moulin's barks, and nothing else, in the bright moonlight.

There will be ups and downs

Here’s a part travellers often keep to themselves: the emotions are out of control. It’s true of any new place. It’s an emotional rollercoaster all the way. The silence. The lack of mobile connectivity. The new place, the fresh air. The warm smiles. The hugs. The instant love. The carefree nature – it’s a lot for city folk to handle. 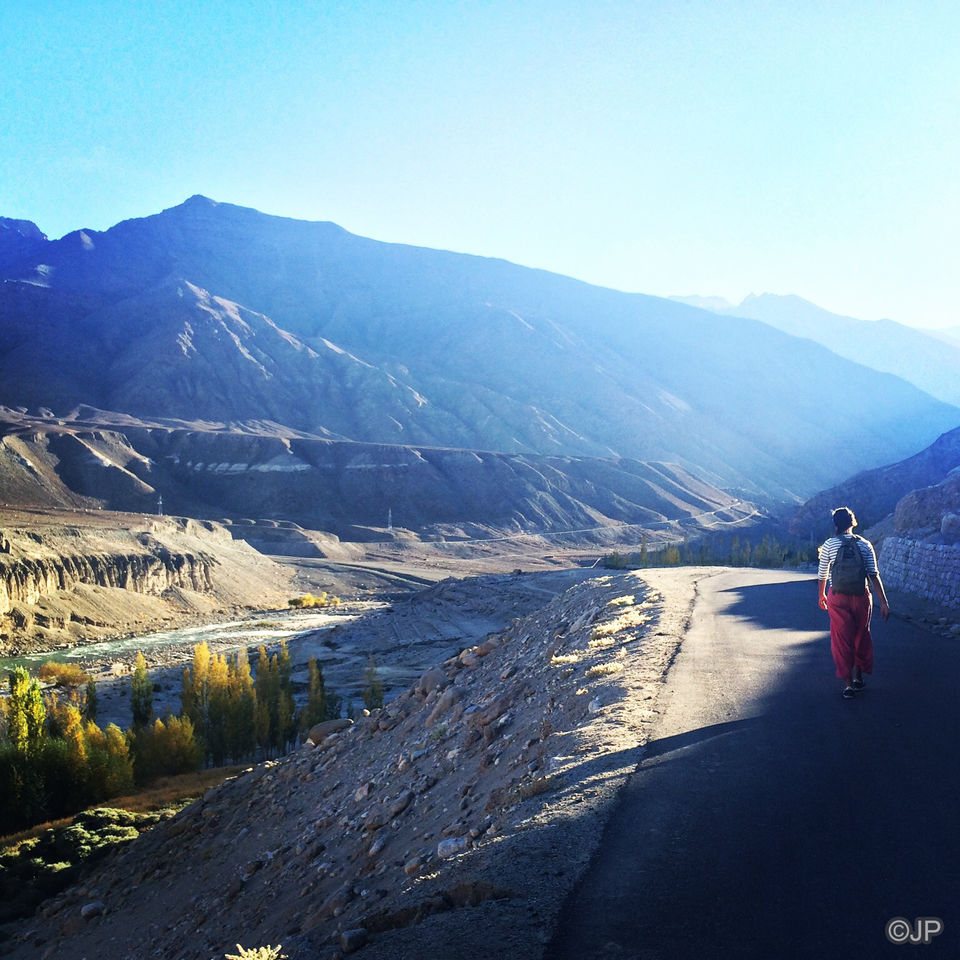 It took me 24 hours upon reaching Ladakh to have all my fears dissipated. The most important realisation was that the minute I had chosen to be a volunteer at the N.G.O. SECMOL, they had already accepted me as a beloved member of their family. The rest of Ladakh is the same.

Don’t act like a tourist, and they won’t treat you like one. They will welcome you with open arms into their homes, feed you the best of their produce saved up for winter and chat with you in broken sentences. They’re curious to know about you, and that curiosity is the best piece of equipment you can carry on your solo adventure. You don’t have to be a great conversationalist. I am downright shy most of the time. But the more you want to know about a place, the deeper you will be taken during your journey. Most tourists scrape the surface of these beautiful mountains. Remember to smile, say Jullay (Hello) to anyone and everyone you pass like the locals do – even if they are clearly tourists too. 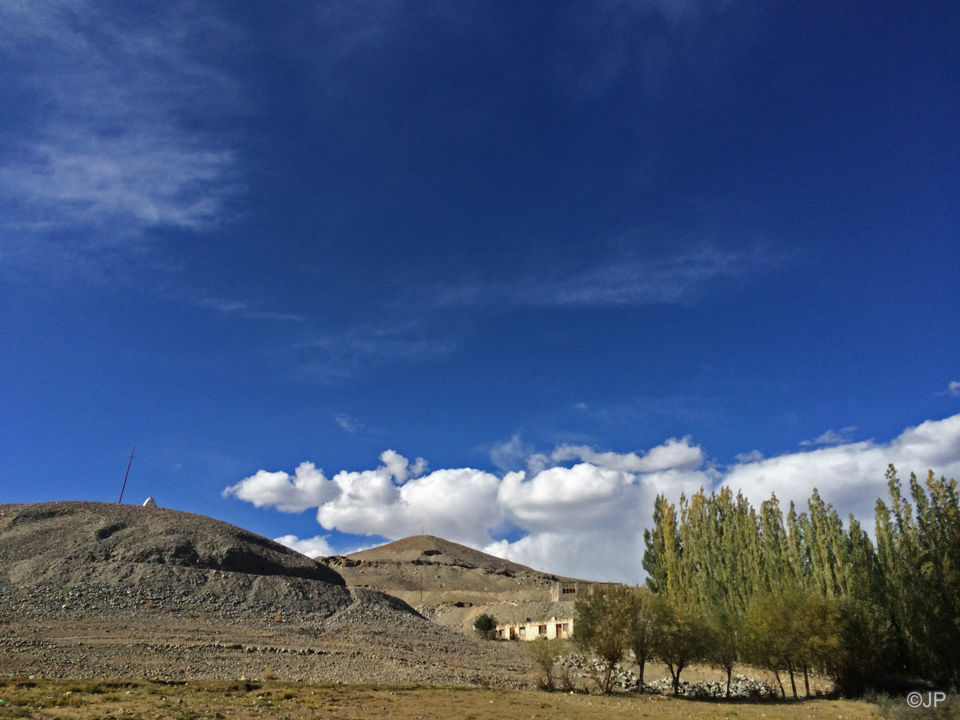 Working with an N.G.O. and staying on campus with young Ladakhi students and staff is just one way to get a peek into Ladakhi life. Another option is to choose only home stays in any village you visit. There’s an abundance of them, and only a few will be listed on the internet. But feel free to arrive in Ladakh with nothing but your map, some money and your curiosity. 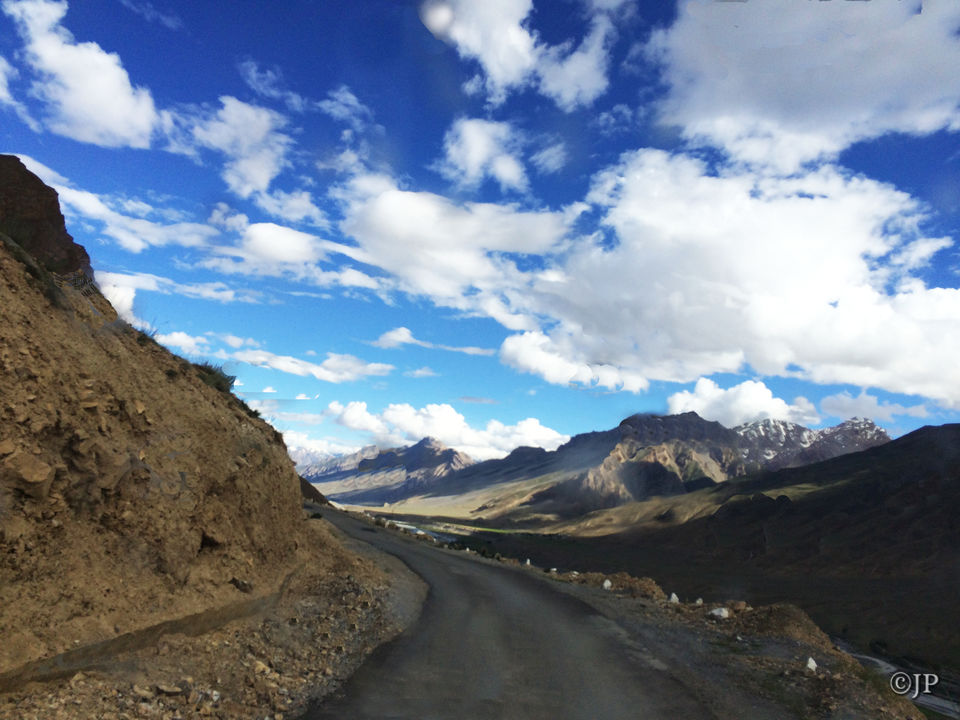 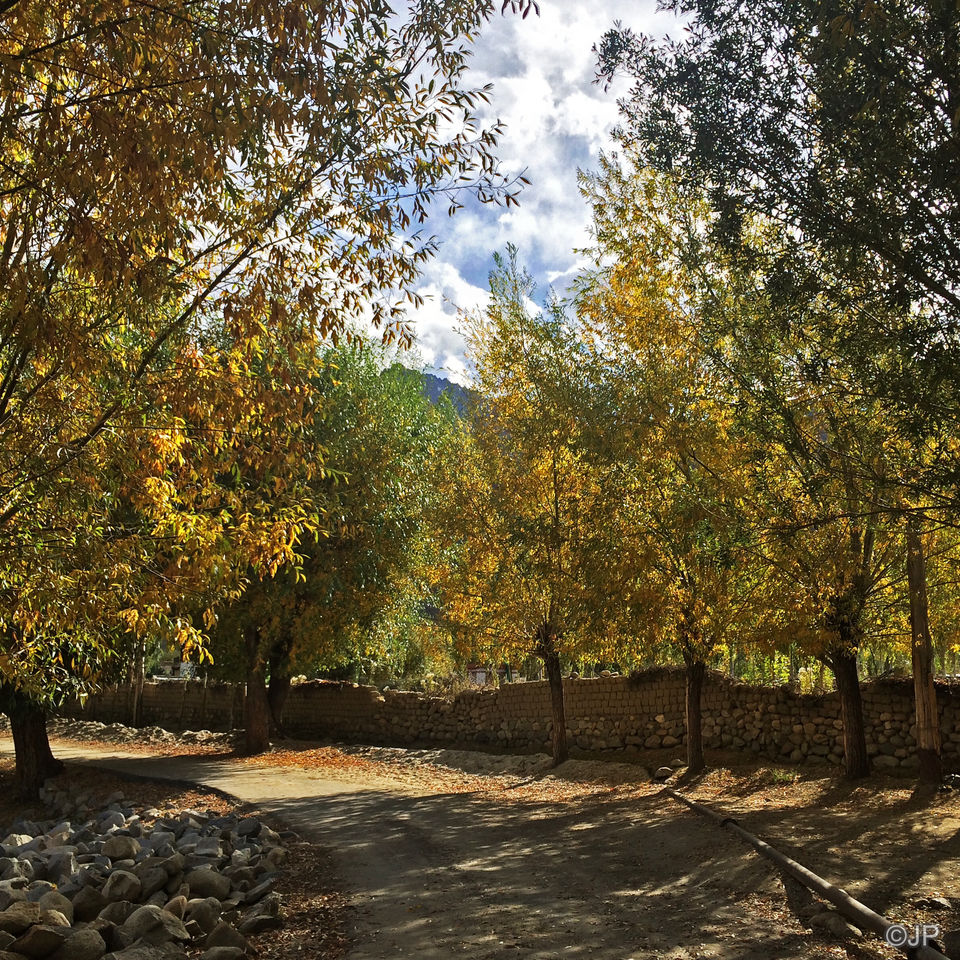 Lose your way, it leads to discovery. @Phey Village, Ladakh

Don’t be afraid to get lost

While taking a walk through Phey village – note, I speak of 3 girls alone, in a village with a population of 30, with no connectivity – we got lost looking for a way down to the river. We ended up in a narrow lane, that ended at the gate of a house and a prayer wheel. I was obsessed with turning every prayer wheel I came across (and there are many in Ladakh) and while I was at it, up came a man of 80 years, strolling with his own miniature prayer wheel in his hand.

We smiled and said our Jullays. We asked him his name, and if he could guide us to the only road we knew of. In a heartbeat Sonam dropped his original course and veered us off into a tiny by-lane that was just a drainage path. We followed him in a single file, and he started recounting stories in broken Hindi. He was extremely excited that I came from Bombay, and told us about a time he stopped by Bombay on his way to see the Ajanta and Ellora caves, while visiting his son, a monk in Karnataka. His excitement was palpable when he described travelling on a boat to the caves. It took one question to know the life story of a man we met 5 minutes ago.

This way, I spent my days with the volunteers, students and many more strangers - cramming overnight before exams, being stuck in brambles, helping each other out of quick sand, being chased out a field by yaks, soaking in the beauty of Pangong lake, hitchhiking for hours, trekking up to monasteries and spending hours laughing. I arrived in Ladakh not knowing anyone. I left having made the best of friends from all parts of the world.

You’ll meet a lot of people on your travels, that’s a guarantee. It’s what you make of these opportunities that matters. Are you curious to know more about them, to know what brings them to the same place at the same time? You can travel the world through their stories. Find out about places you never knew existed in your own backyard.

I met a man named John who had been travelling the world – a free spirit who had been to Rameswaram, an unheard of island between India and Sri Lanka having followed a group of professional Slack liners (Tight rope walkers). An American, who was propositioned by a man within an hour of arriving in Delhi. An Australian, who had run marathons in multiple countries, Istanbul being next in line. An American couple touring all of Asia on motorbikes, touching hearts along the way. A boy from Bangalore who came to Ladakh a few years ago, could not go back to life as he knew it and proceeded to build a new life in Ladakh. A Parisian girl, in whom I found a soul sister, with whom I shared my room and food and time and music and stories. Countless stories. All these, and countless more treasures lie hidden in the coarse land and tall mountains and turquoise rivers of Ladakh.

SPONSORED
Want to book a similar trip?
I accept the Terms of Use and Privacy Policy of Tripoto.
SPONSORED
Related to this article
Things to Do in India,Places to Stay in India,Places to Visit in India,India Travel Guide,
Tagged:
#Travel#Wanderlust#Ladakh#India#Travelogue#Backpacking#NGO#Solo Travel#Travel Blog#Photography#Explorer#Why Travel Solo#Road Trip#Budget Travel#luxury#backpacking#adventure