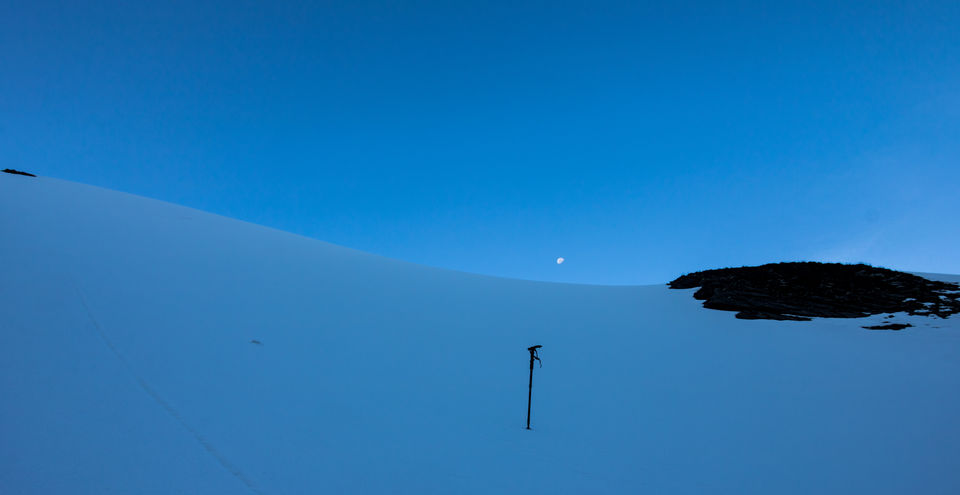 Then the sun hits you.

You wake up out of your walking reverie, and soak in the view. It’s beautiful. It doesn’t last for long, and maybe it’s meaningless, but to be thousands of feet above your ordinary, pointless lives, it hits you harder than any other fix. People go on treks to find the little joys that their modern lives can’t make room for. And to measure the rawness of their civilized minds.

This was my first trek. When I was walking around the Roopkund Lake, I knew it wouldn’t be my last. The thrill of looking at the next day’s trail as your trek-leader briefs the team over dinner is replaced by doubts every night in the sleeping bags. But doubt is veiled resolve. And now when you walk in snow-white snow, it just makes you laugh. You’re saying to yourself, “Did you shit your pants?”

I like travelling alone. I’m not bound by restrictions, or forced to do things so that the group isn’t offended. Meeting strangers and listening to their share of weirdness gives me a good kick. This time around, my group had a few seasoned trekkers in it. It was a pleasure trekking with them, as anytime someone felt like giving up, the barrage of humiliation that he/she was exposed to was bound to make them leap for the speaker’s throat. And that’s what kept many of us going till the end. Unfortunately, three of our buddies fell victim to AMS. Tough luck. However, we had a father-son duo in our group; the son only twelve. Not once did he cry for his mother, his father made sure. (Quite honestly, the kid stole the show.)

I decided not to write a detailed day-by-day account of the trek since every site of every trek-organizing company already has one. No need to worry, they do not lie about anything. You can choose from a host of companies. I went with the one that offered me the cheapest package – Crazypeaks. Every group on such treks, no matter the company, eats the same food, gets water from the same streams and sleeps under the same set of stars. The only difference is you might get a better tent through the more expensive ones. I mean, no one is going to carry you on their backs because you paid more. It’s the Himalayas; if you can’t take it rugged, you better stay home.

On the last day back at Loharjung – our base camp, we celebrated our success. That’s when I got to meet most of the group. We were out on the terrace, enjoying the last few hours of our Himalayan story, when someone mentioned if anyone managed to capture the view, right before the start of our climb for Roopkund, at three in the morning, on a windy 15th of June. No one had.

“Well what was it like?” said one of those who didn’t make the final leg.

I faded back into that moment. It was three in the morning. The wind was strong; it howled in our ears, looking for targets to topple over. The night of ascend to the summit lets you measure the depth of your heart. It will let you know if you have any. People were busy quietening their demons, as the clouds drifted westwards to clear the mountain that nestled the Lake. We waited patiently for the groups in front to move. As the clouds rushed away to reveal the glittering darkness for the first time, our eyes moved towards our destination. That’s when we saw it. One group had already made it past the halfway mark. They were perched on part of the trail that looked most ominous from down below. But all we saw was a bunch of headlamps making their way slowly through the pitch-black night, lighting up the snow and our hearts as they went. Life in the mountains is many things, but it’s never dull.

“So what was it like?” said the tipsy friend again.

His friend just looked up at the sky. The Milky Way had been rising in front of us and we were pretty high. He just stood there for a moment, then turned to face him. The struggle for words was real.

“Man, you should’ve been there.”