St. Petersburg - A Jewel on the River Neva

The cruise liner docked at St. Petersburg in Russia, a port city at the head of the Gulf of Finland. We had two days to sample the delights of this one-time refuge of the Russian tsars. An exquisitely beautiful city straddling the River Neva, St. Petersburg has sprawling boulevards, meandering canals and old world buildings.

At the peak of summer it was still very cold. At 60°N latitude what else can one expect? Founded in 1703 and named after its founder Peter the Great, the city was known as Petrograd at the time of the October Revolution. The Bolsheviks renamed it Leningrad. When the Soviet Union splintered in 1991 the city was re-christened St. Petersburg. For centuries it had been the capital and cultural centre of Russia. The chess grandmaster, Boris Spassky, the famed ballerina, Anna Pavlova, and the renowned authors Vladimir Nabokov and Ayn Rand were born in this city, not to mention President Vladimir Putin. 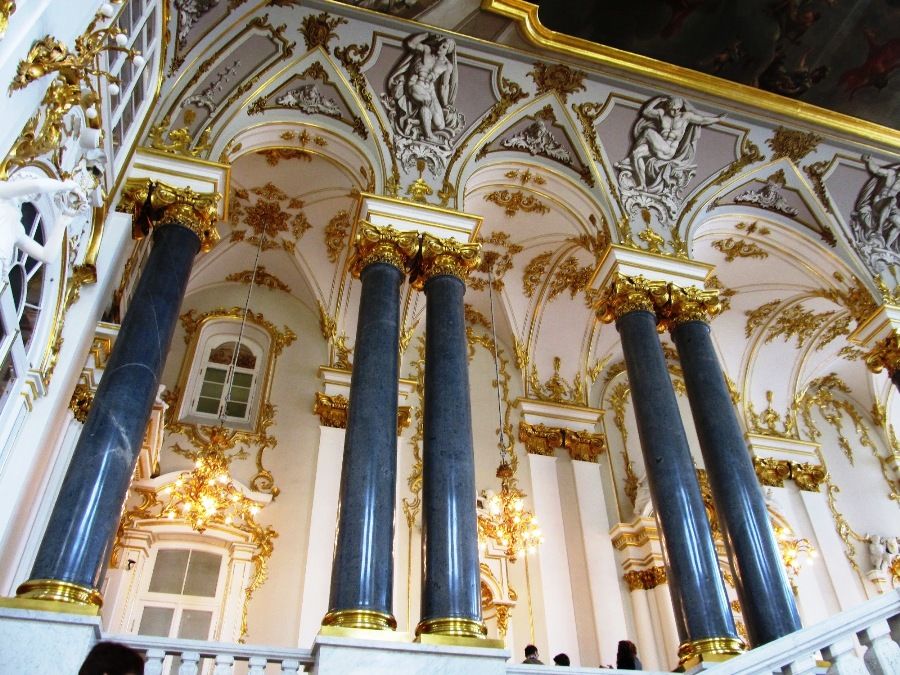 St. Petersburg still has a royal ambience, despite surviving Stalinist purges and severe deprivations during the two World Wars. Trams, trolleybuses, cabs and the metro make getting around the city an easy task but safety remains a question mark. You don’t see the mafia but you know they’re lurking around.

Nevky Prospekt, the main boulevard, has a spectacular layout. The Peter and Paul Fortress, the Cathedral of St. Isaac, the Chesma Church and the Alexander Column in Palace Square are worth a visit. The Hermitage Museum, housed in the Winter Palace complex once graced by the ill-fated Romanov tsars, is one of the best in the world. The Jordan staircase was mind-boggling – and that’s an understatement. 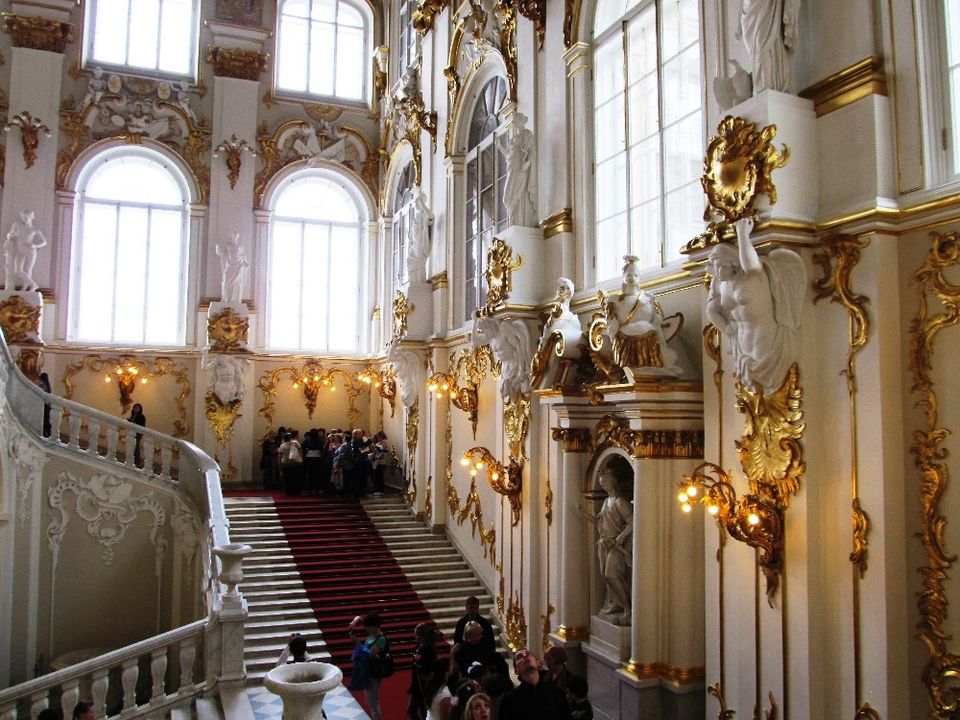 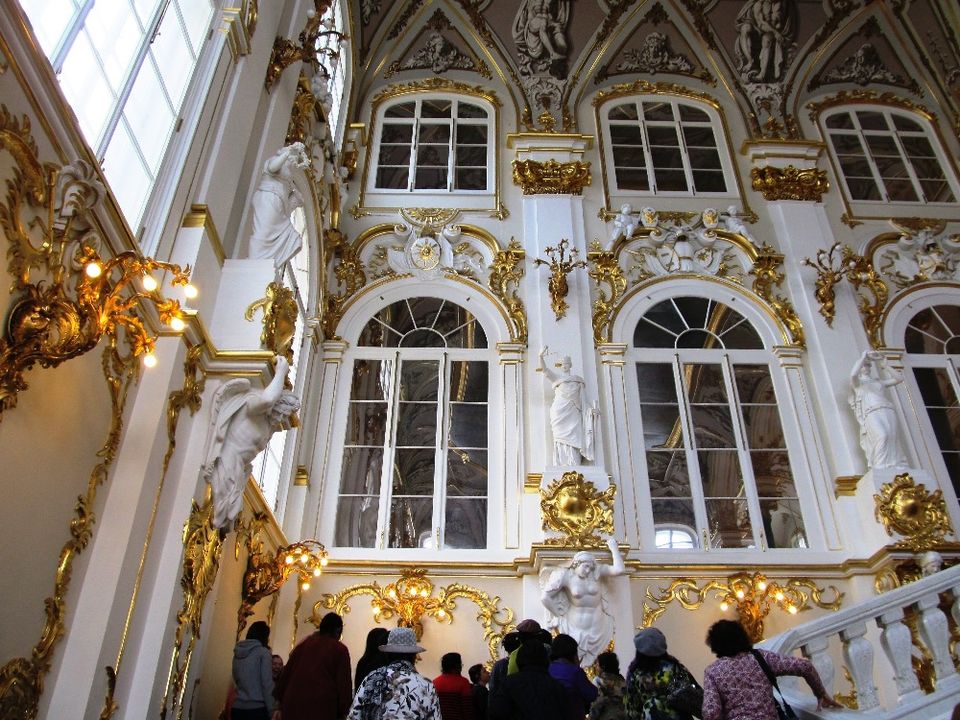 Standing in the magnificent Malachite Hall where the world’s first communist revolution had occurred was enough to give goose bumps to the commies in our group.  We had all heard of the storming of the Winter Palace on the night of November 7th, 1917 and the events that led to the execution of the last Tsar the following year. 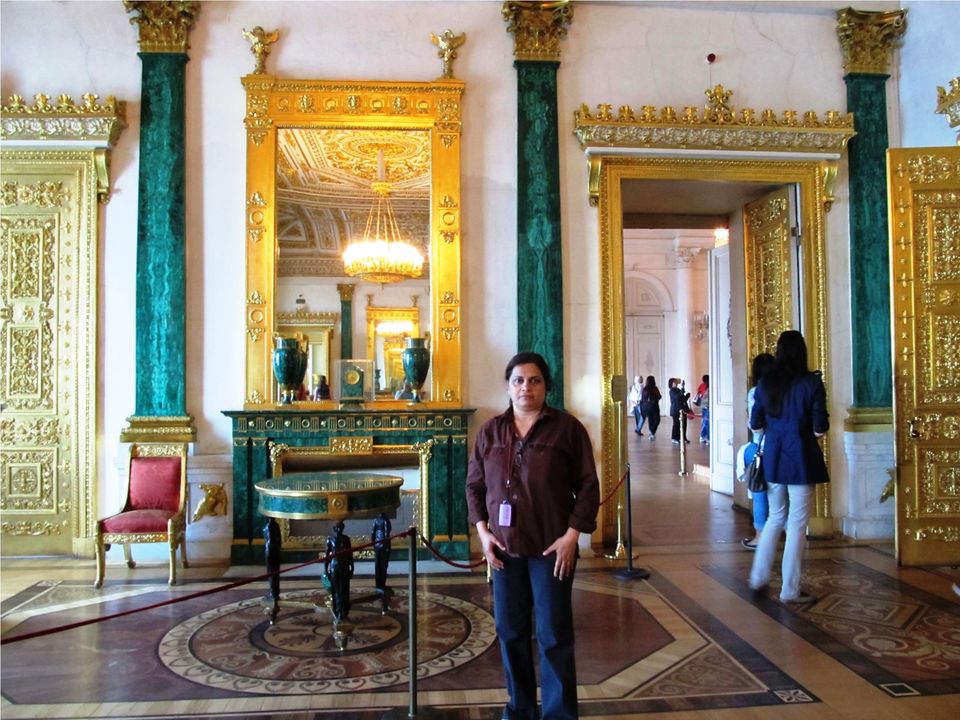 The spectacular antiquities numbering three million reminded me of the Louvre in Paris and the Egyptian Museum in Cairo. Catherine the Great, the powerful 18th century tsarina started this collection in 1764 with the purchase of a magnificent hoard of 255 paintings from Berlin. 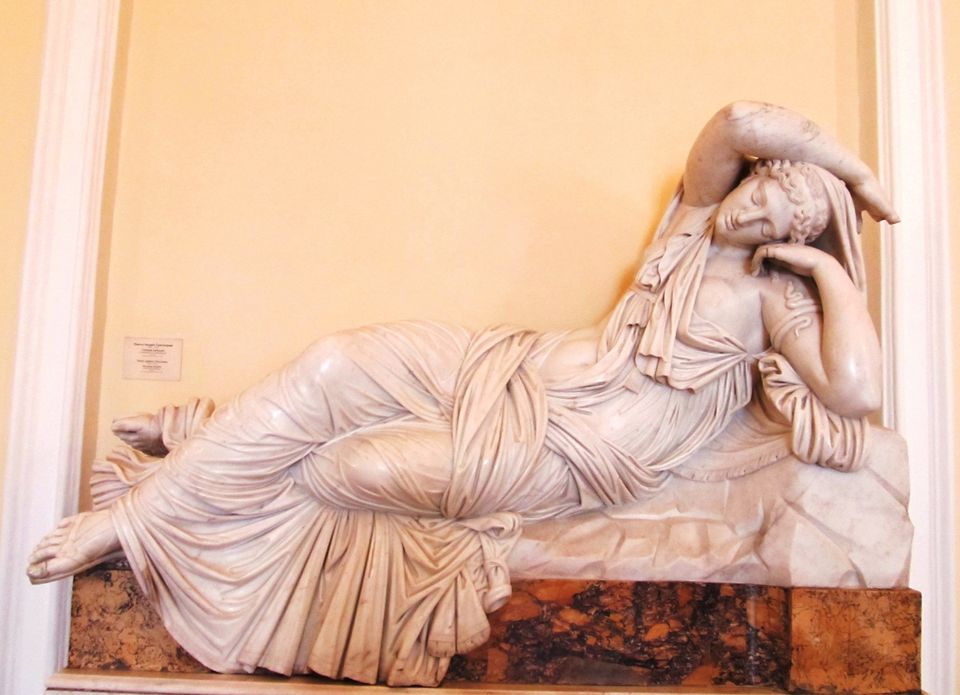 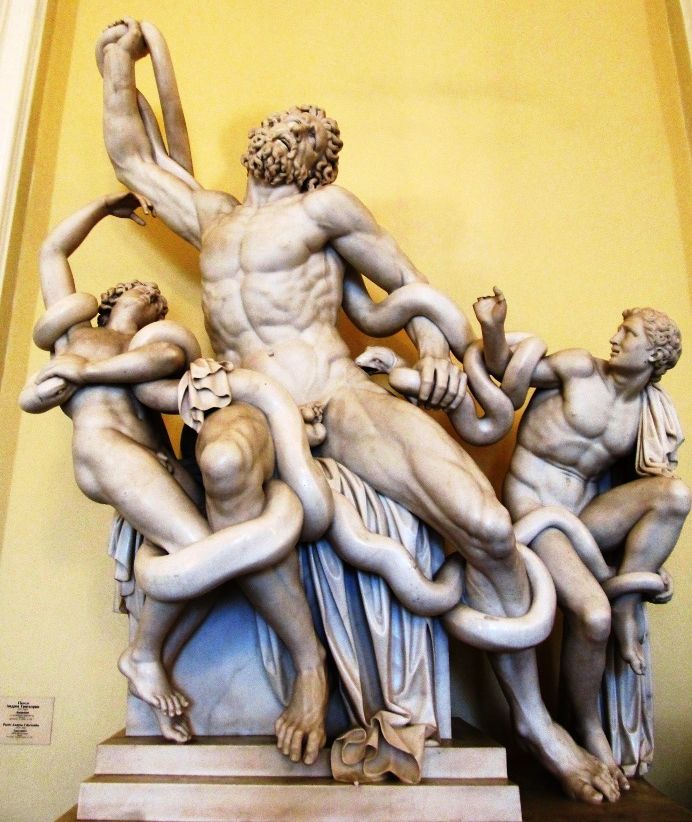 The twilight lasted well after 11 p.m. but the intermittent drizzle and cold wind compelled us to rush back to the cruise ship well before dinner time on Day 1. The main chef was French but the next in the culinary hierarchy was a young man from Madurai who would have rasam and veggie southern delicacies waiting for us on our return.

The weather gods were kinder on Day 2. 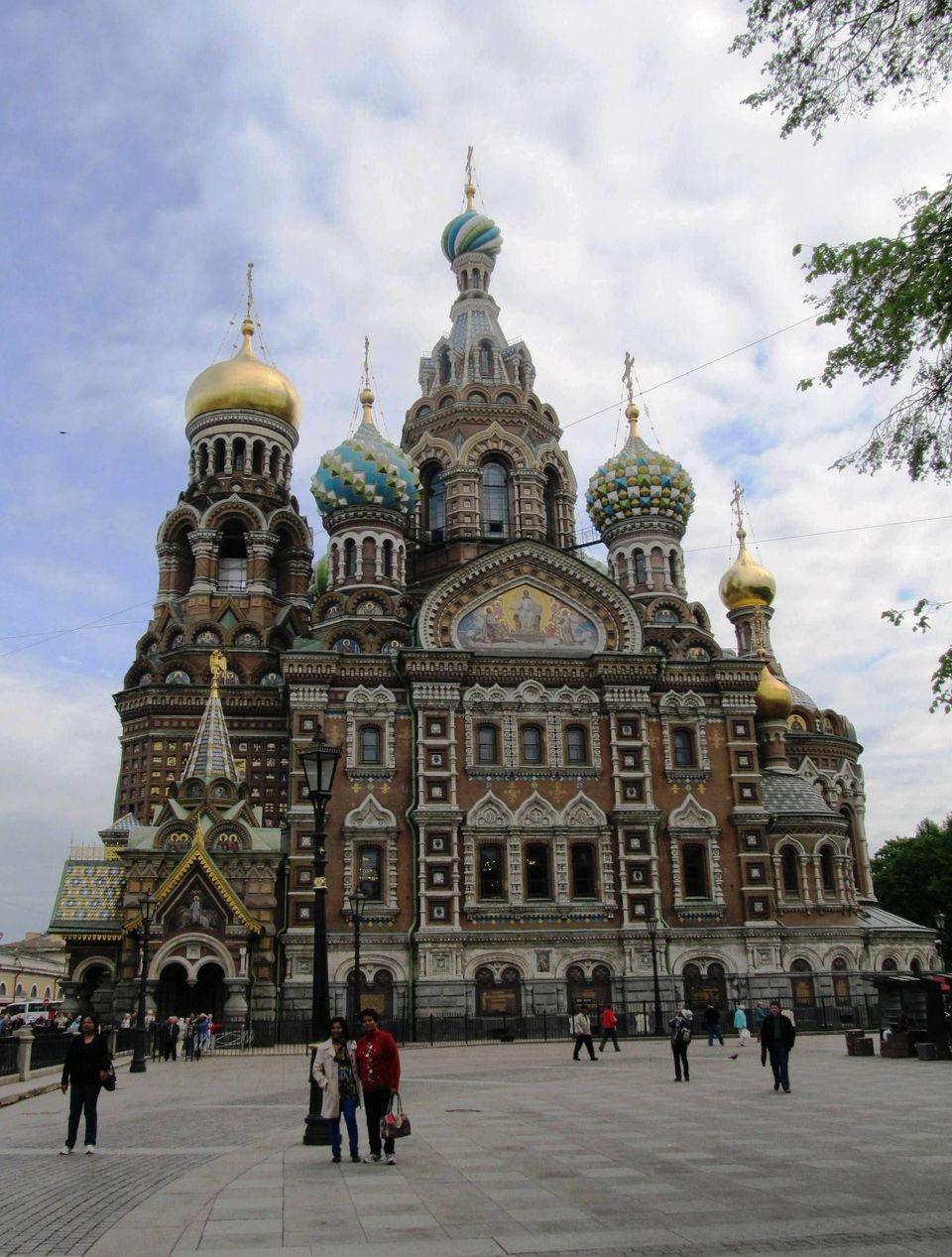 The Church of the Saviour on Spilled Blood, a Russian Orthodox church, looks like something out of a fairytale with its multi-colored façade and onion domes. It commemorates the spot where Tsar Alexander II (the man who sold Alaska to the United States) was mortally wounded in a grenade attack in 1881. His secret police was credited with banishing many dissidents to Siberia. (So the commies did not invent this practice!) The interior of the church is a virtual museum of mosaics with intricately wrought biblical themes. Closed down by the Bolsheviks for decades, it doubled up as a mortuary during World War II and later as a warehouse for potatoes. Today it’s a showpiece rather than a place of worship.

The Peterhof Palace and garden complex re-create the opulence of the Palace of Versailles in Paris. There are numerous gold leaf decorations, impressive statues, and manicured gardens. The majestic fountains and the Grand Cascade function faultlessly without the use of water pumps. 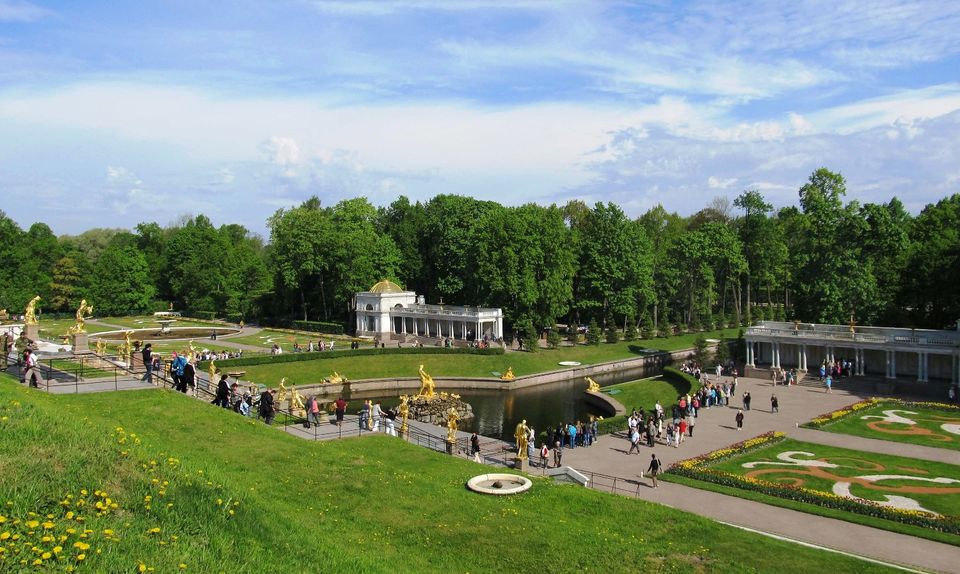 Our tour guide, a svelte, soft-spoken Russian girl told us the country is struggling to attain economic self-sufficiency. We had a humble Russian meal of soup, bread, meat and vegetables at a traditional restaurant. They told us the Russian Standard Vodka and LIVIZ vodka would be too harsh on our delicate female palates. The young boys who served us expressed their undying love for Hindi films and music. I felt proud to be an Indian.

P.S. I haven’t seen Moscow yet. It’s been on my bucket list for a long time.