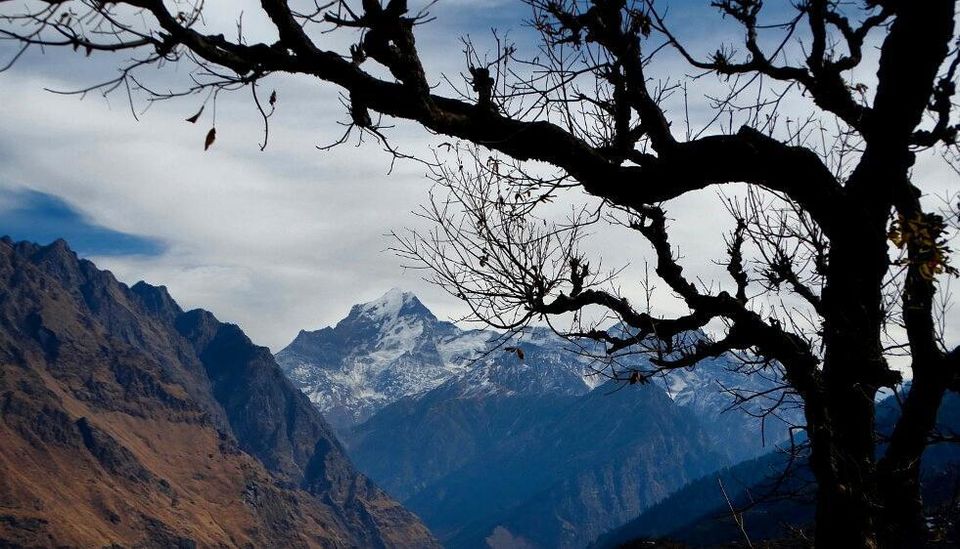 You know the thing about Himalayas?

When you are up there, amidst the mountains, and the chilled winds, the narrow passages and the slipping snow, you are so much engrossed in maintaining your balance and walking straight and strong, that nothing else would seem to exist.

It is when you are off the mountains, the snow and the winds, that it slowly comes back to you, in the months that pass you. You then start recalling the little details and how they have all collectively changed you, and for good.

In the December of the last year, I went on a 6 days winter Himalayan trek to Kuari Pass. The trek was nostalgic, and every time that my thoughts wander back to those few days, I miss them. And every time someone asks me how it was, the words automatically come, like a reflex “Amazingly-amazing”. 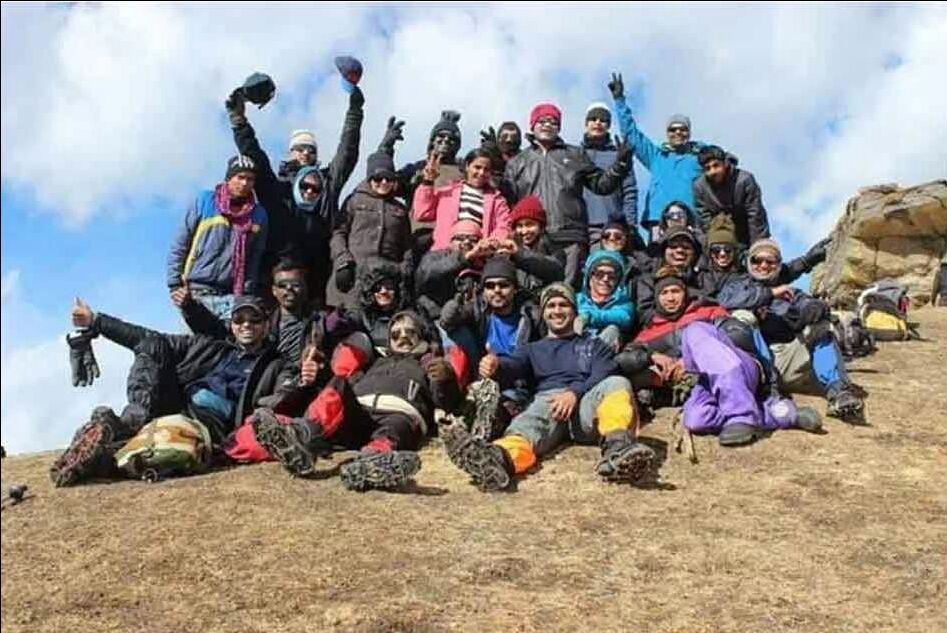 Today, I set back, and again went to those 10 days of overall journey, smiling at the accomplishment and the experience. And I started writing down ‘my special moments’ of the trek. And then, it hit me.

Now, after around a year of the trek, when I ponder, I realise that the majority part of the trek was pretty conventional, and what made me have an amazing lasting memory of it was, the last one and a half hour of the descend.

All through the trek, I have been either in the group who reached first, or the group which reached second. But on the way descend, I decided to move at the end, to cherish the snow for a little longer and to flirt with the woods a little more. We were three people walking in the end. A coleader, and two of us.

From the left. Aneesha, Eknath aka ‘Coleader’, me. 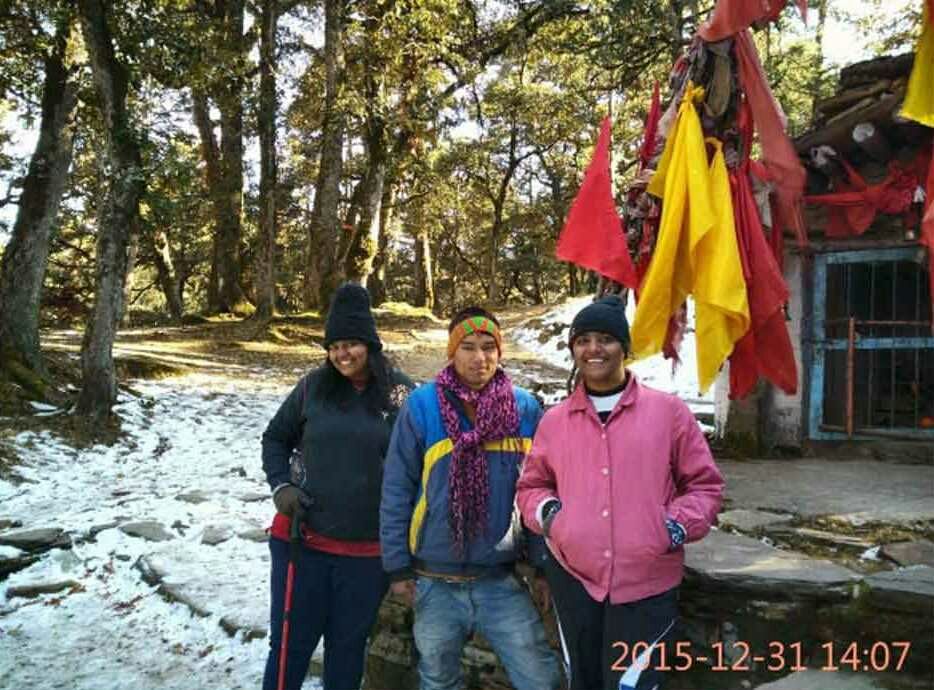 Initially, the descend was quite easy to walk through. Yes, the snow was much more deeper, around a feet deeper, than what it had been on the way ascend. But it was soft. And the soft snow rather makes you feel home, than rush you away. So, the first few hours of descend passed easily, moving with the beats of the songs being played, and fun-frolicking around.

And suddenly, I went astray. I started running in the snow, the same snow which was difficult to walk through some while back, just to have enough time space so that I can write the names of my best people in the snow as a new year’s present. It was 31 December of 2015. And that is the magic of friendship. If gives you the power to do anything.

They give you a strange power, the strength and belief that everything’s gonna be alright, soon ????

By now, we were into three hours of descend. It was after those three hours, that the snow turned a little shallower. But, it became dusty. Till now, it had been a pure snow, and it was as if there had been a fall that just preceded our walk, and covered the walk with a fresh and a soft layer. But the patch that we were now crossing, the snow became hard and dusty.

And top it all? We didn’t had crampons for our support. It became extremely difficult to walk through without slipping at every second step. “Count the number of slips. The one with the maximum slips will remember it the most.” said the coleader and my friend slipped, just then. We laughed, even in those precarious times. And we continued moving ahead. By this time, we were considerably lagging behind.

The rest of the fleet would have already made it to the base camp, and we were still at a minimum distance of half an hour and a quarter, that was, if we would be able to maintain our present speed. And then I saw the another trek leader running towards us, just missing the slip. It was confirmed. The rest of the fleet had finished the trek.

Now, there were two trek leaders, and the two of us. Our old accompanier took my friend, and I started walking with the just new entrant, who also happen to be my favourite leader. And surprisingly enough, we started running on the dusty-hard patch. He held my hand and that gave me support. There was a strange thing with our run. Many a times, we were just on the brink of slipping, but somehow we balanced the run. I started laughing frantically. The patch was still the roughest, but it felt a little benign now.

With Nitin. I wonder how we managed to get this click. The snow was so dusty, it was difficult to even walk. 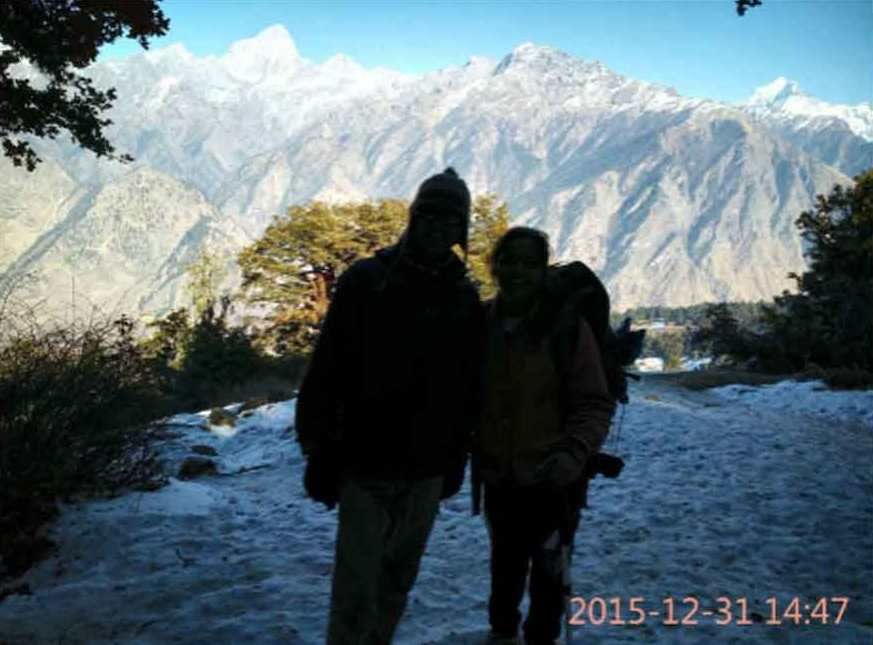 “You want to skid?” he asked me suddenly. “What? Is it possible?”, I looked in shock. “Let’s do it”. And the adventure streak in me was never going to say a no. The skidding trail was around 20 feet. I sat at the snow, my bumps feeling the cold, and I went, straight down, skidding the cold bumpy ride. Just as I reached the bottom, I let out a loud laugh. A laugh of accomplishment and satisfaction. The eerie laughter. It was craziness, and finally we were at the end of the difficult patch. And this way, he walked with me, taking me through the path which the remaining 23 mates didn’t take, a path more adventurous, skidding, and running on the snow, slipping. That was the last patch of the trek, and the most beautiful part too.

When we had finally reached the base camp, I had a huge smile, at least for another half an hour. I was cherishing the last couple of hours. And that is what still makes me smile. Those one and a half hours, and they are the reason for the reflex. 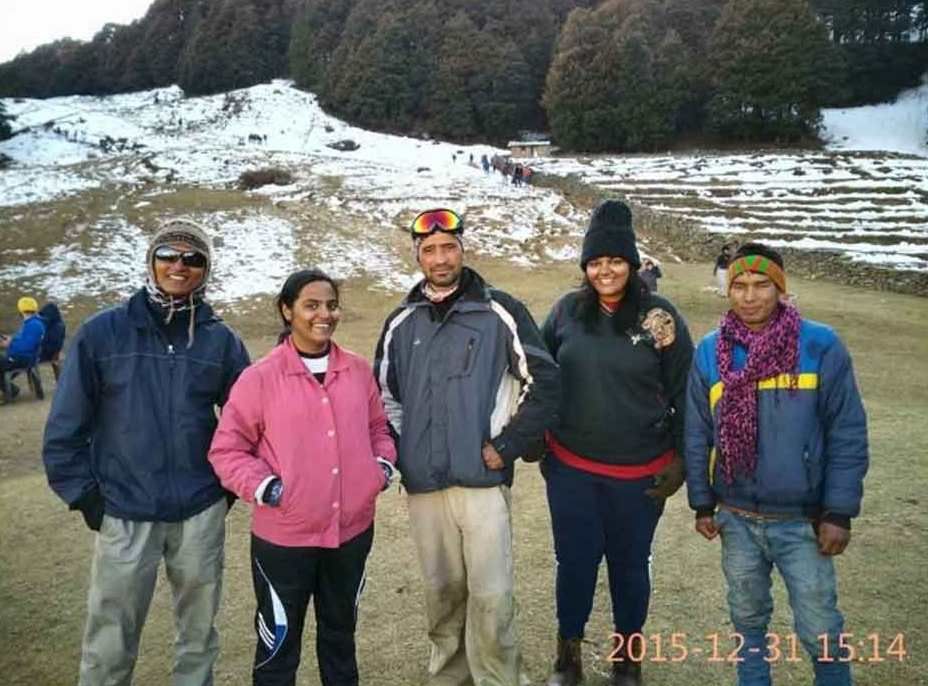 It made me realise, it is often how we end things up, which defines the experience. We may have a bad start, and maybe, it is still going bad, but always, do remember, that what counts most, is a beautiful ending, a beautiful last ‘thank you’, and beautiful ‘goodbye’, a happy last half hour at work, just a last beautiful memory.

” Life is the not the breaths you take. It’s in the moments that take your breath away.”