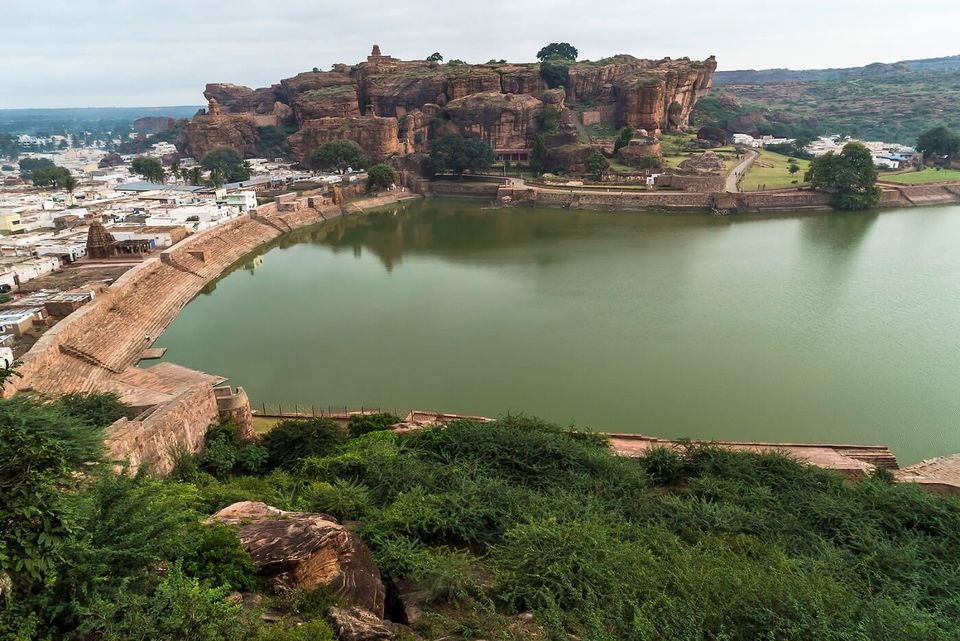 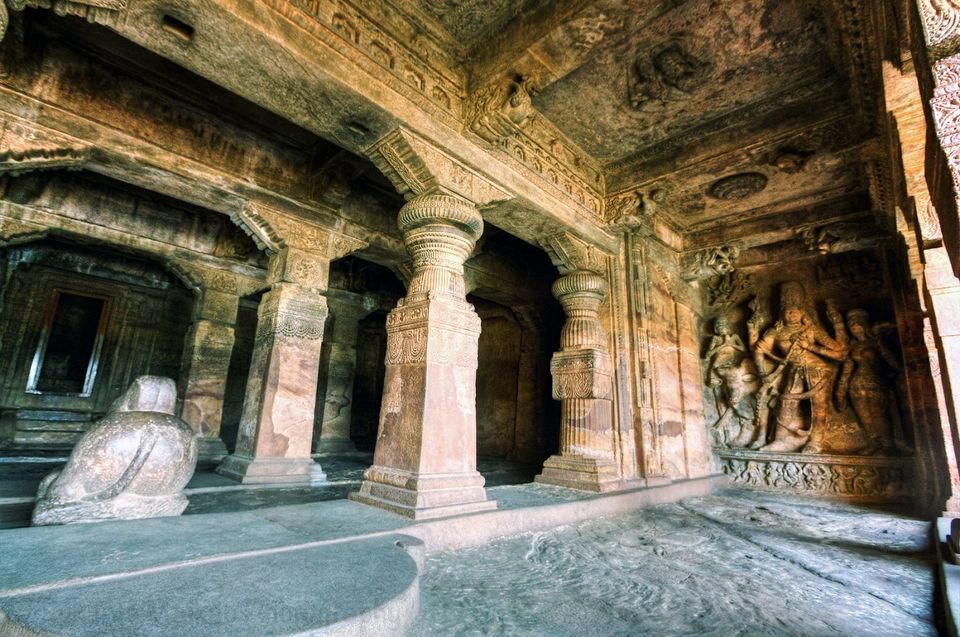 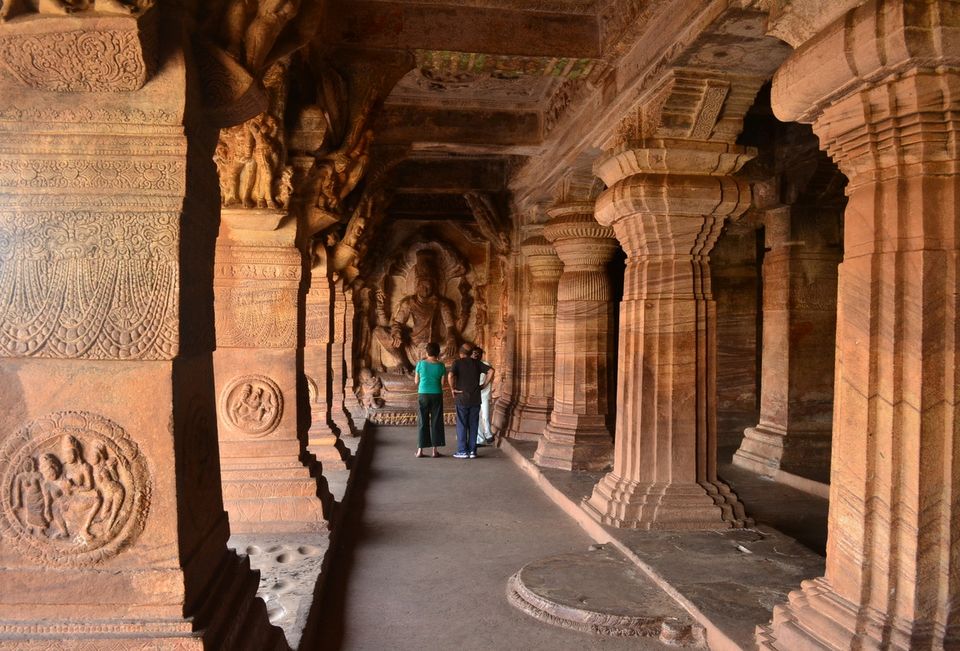 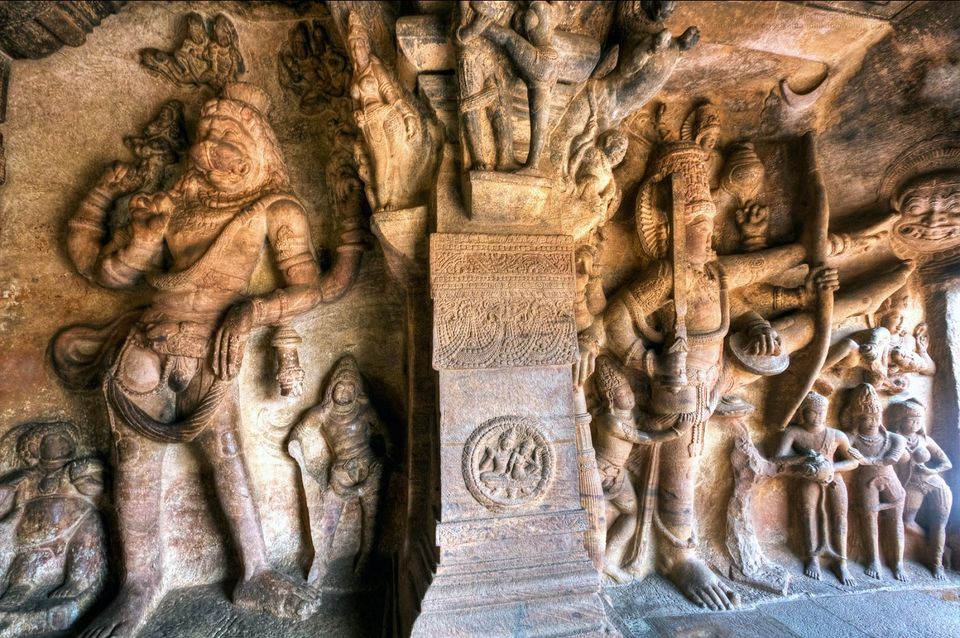 Set in the town of the same name, the cave temples of Badami are the epitome of traditional Indian rock-cut structures dating back to the 6th century.

The complex comprises of four cave temples which were built during the rule of Pulakesin I but most of the expansion took place during the Chalukya period.

Originally Badami Temple was called Vataapi Badami, the capital of the Chalukyas and was considered the centrepiece of temple architecture.

These temples depict the Chalukya style of architecture, an eclectic mix of North and South Indian styles.

There are a total of 4 cave temples that are carved out of sandstone on this hilly terrain.

:---The first cave is dedicated to Hindu divinity and features Lord Shiva in the form of Nataraja.

:---The second cave honours Lord Vishnu in his fifth avatar of Vamana.

:---The third cave is 100 feet deep and considered the largest amongst all the four. This cave is covered with remarkable paintings and enchanting adornments. It is also dedicated to Lord Vishnu.

:---The newest addition is the fourth cave that was built during the later parts of the 6h century. It contains the sculpture of Parshavanatha, the fifth Tirthankara. A sculpture of Lord Mahaveera can also be found here. A few other caves were discovered in the year 2015 that contains 27 Hindu figures. The Badami Cave Temples is also a part of the UNESCO World Heritage Site. 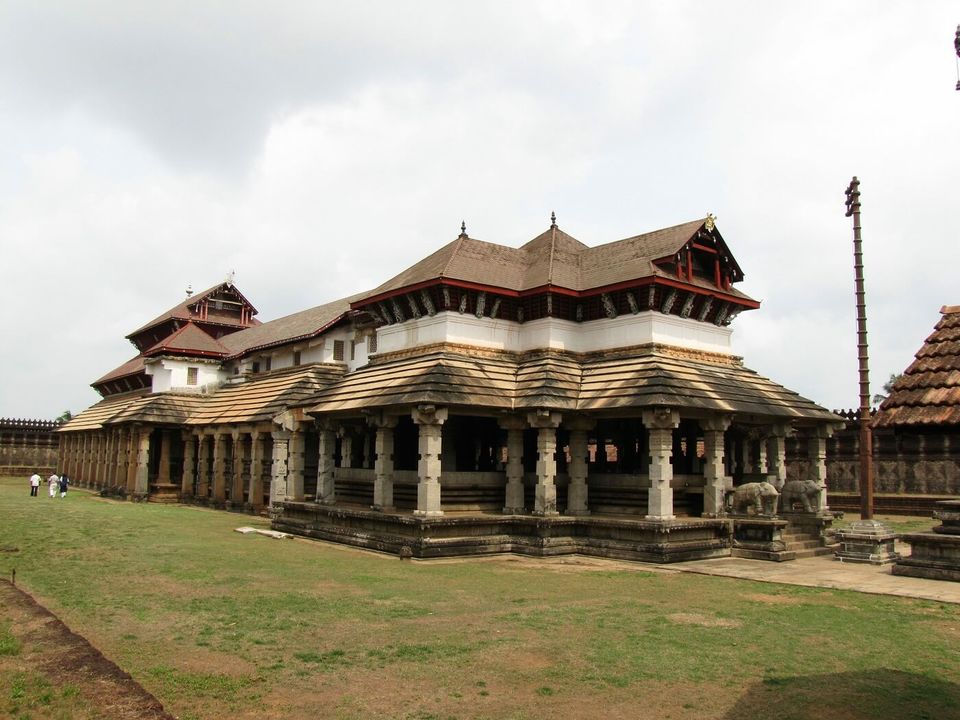 This temple is situated in the town of Moodabidri and known for its 1000 pillars.

Moodabidri boasts a total of 18 Jain temples but Saavira Kambada is the finest amongst them all.

It was constructed in the year 1430 by Devaraya Wodeyar (local chieftain) and features a monolithic pillar with 50 feet height.

It took over 30 years, to complete the construction and new additions were made in 1962.

The grand Kambada Temple flaunts 7 pavilions that are entirely supported by exquisite granite pillars designed in the Vijayanagara style. Each of the pillars is unique and no two pillars look the same.

These pillars will give you a glimpse of a fascinating past that is lost in time.

There are stone made chandeliers that form a part of this architectural marvel and never fails to blow the common man’s mind.

There is divine connectivity that can be felt here that lets visitors drift in oblivion. 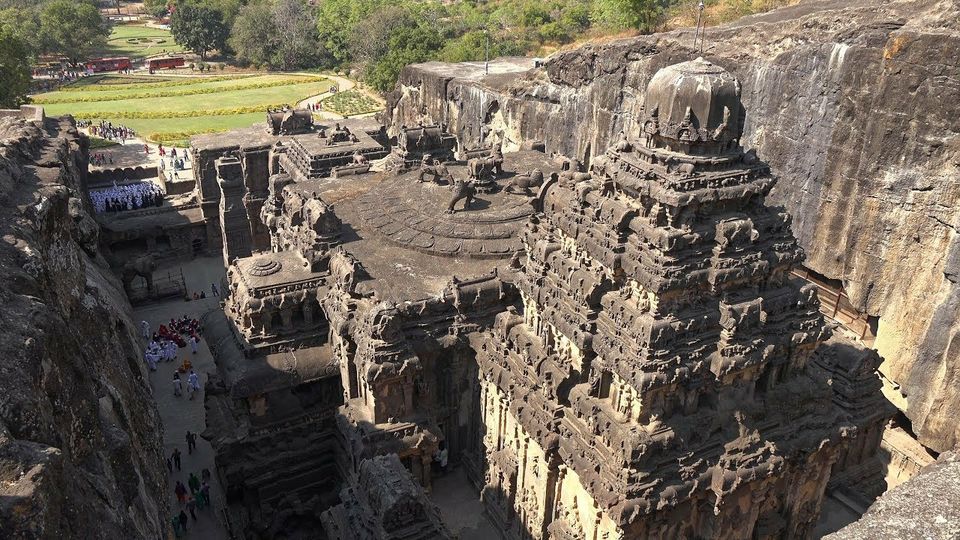 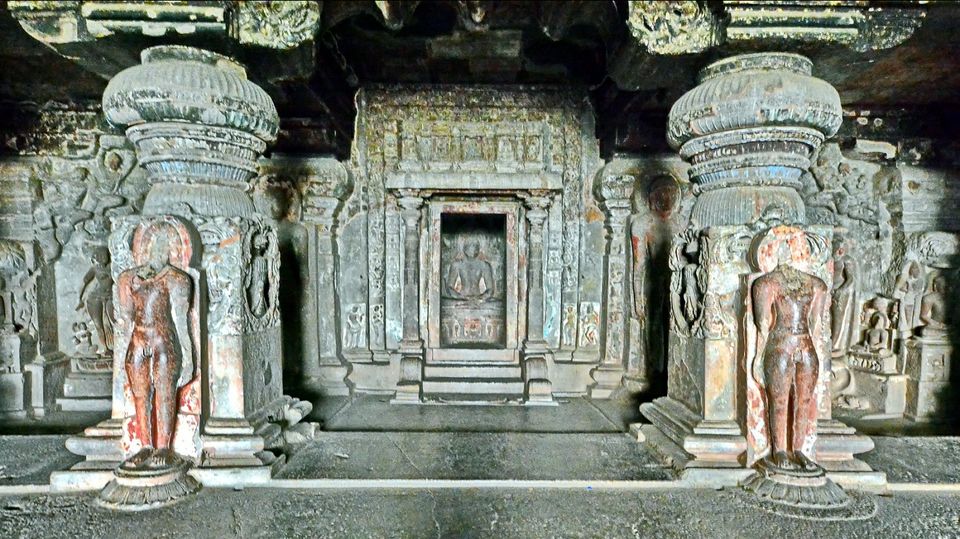 Away from the tourist bustle, lie the remarkable Jain caves of Ellora adorned with detailed carvings and paintings. The caves are carefully crafted to perfection around 9th century celebrates the last phase of religious and spiritual activities taking place at Ellora. The cluster of five caves is numbered between 30 and 34 and is set at a distance of 1 kilometre from Cave 29, the last Hindu temple.

Cave 30, often referred to as Chota Kailasa is an imitation of the iconic Kailasa Temple. This cave is located at a few yards away from the other Jain caves.

Cave 31 is a four-pillared structure where an idol of Mahavira is enshrined. The carvings of Parshvanatha guarded by yaksha and the figure of Bahubali can be seen on both sides of the walls.

Cave 32 and 33 are two-storeyed caves, resembling the Indra Sabha and the Jagannatha Sabha. Both of these structures are carved with well-preserved idols dating back to the 9th century.

Cave 34 contains a large carving of Parshvanatha accompanied by Gommateshvara. All these caves form a part of the UNESCO listed World Heritage Site. 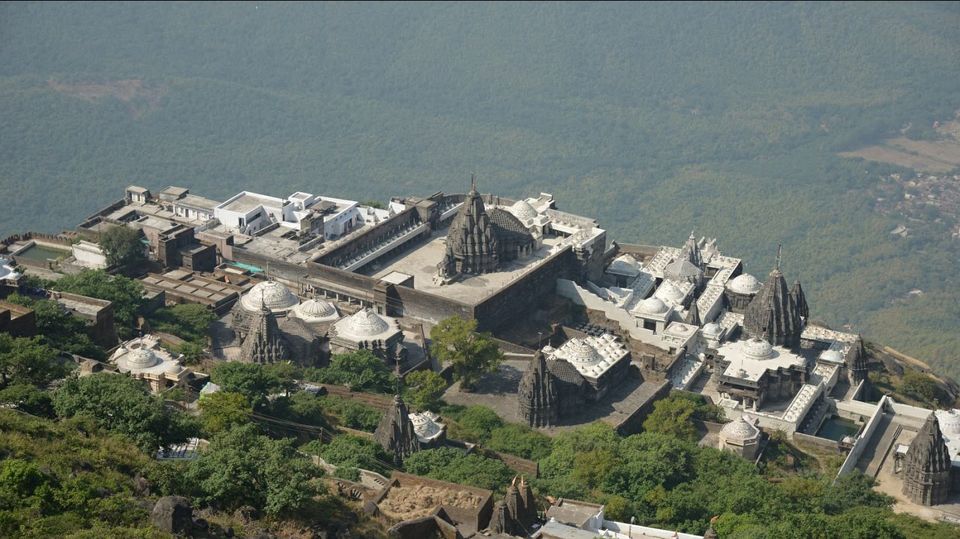 A cluster of Jain temples is perched on Mount Girnar in the state of Gujarat.

These temples are considered holy by the Digambara and Shwetambara Jain communities. Mount Girnar is known for its spiritual significance.

The 22nd Tirthankara, Lord Neminath attained Moksha and died at this holy spot.

The shrine of Neminath was built around 1129 by the Governor of Saurashtra but the region was considered sacred even before 250 BC.

Around 16 temples are scattered at the site and the Neminath Temple is the most important amongst all.

The grand complex is carved out of marble and houses several statues of Jain Tirthankaras.

In order to reach the top of the temple complex, one has to climb around 10,000 steps. From the foot of the mountain, ‘palkhis’ are also available and devotees can opt for one if they find it difficult to climb.

Meditating amid this heavenly environment brings peace of mind and soul. 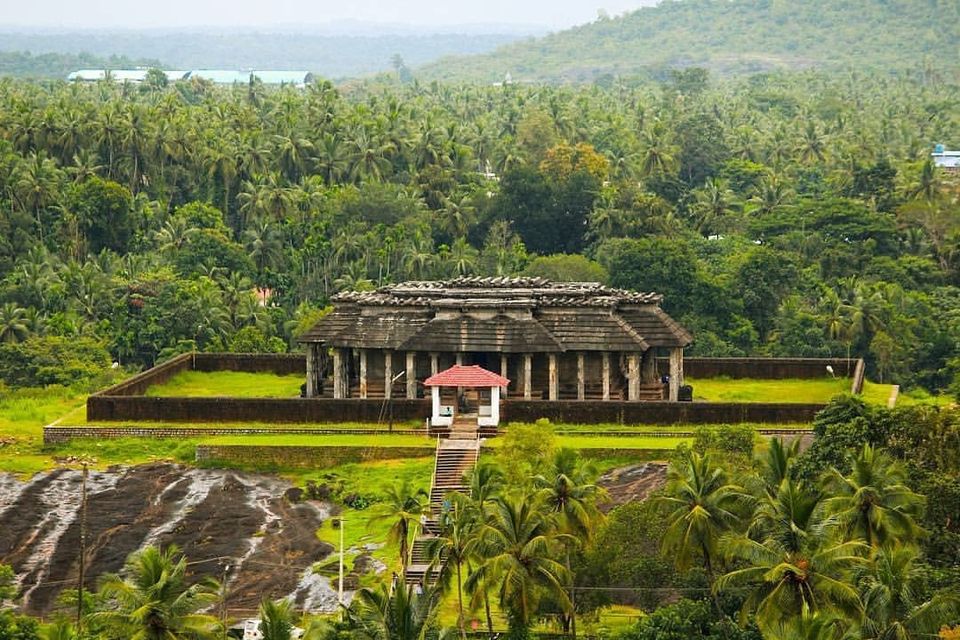 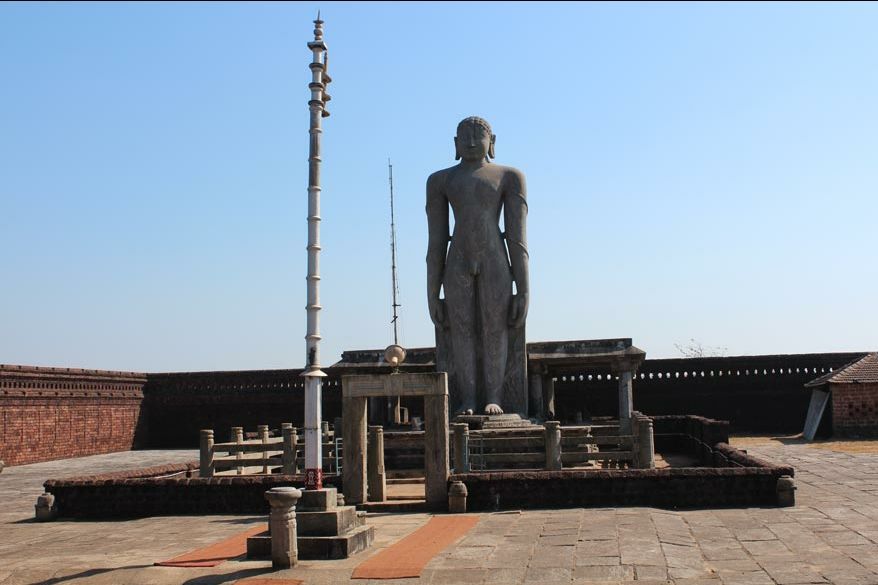 Chaturmukha is one of the most popular Jain monuments in Karkala constructed under the patronage of Immadi Vodeya of the Santara Dynasty. It was built in the late 16th-century and contains images of Aranath, Mallinath and Munisuvratnath (Jain Tirthankaras). Today, the Chaturmukhi Basadi is preserved under the ‘Archaeological Survey of India’.

The Basadi is entirely made from granite cuts and features over 100 pillars that support the ceiling. It is elegantly crafted with four symmetrical faces, hence the name ‘Chaturmukha’. The temple is open on all sides that add to the uniqueness of the structure. Chaturmukha Basadi faces the great Bahubali statue of Karkala. Besides devotees, tourists from all over the country visit Karkala to get a glimpse of this sacred landmark. 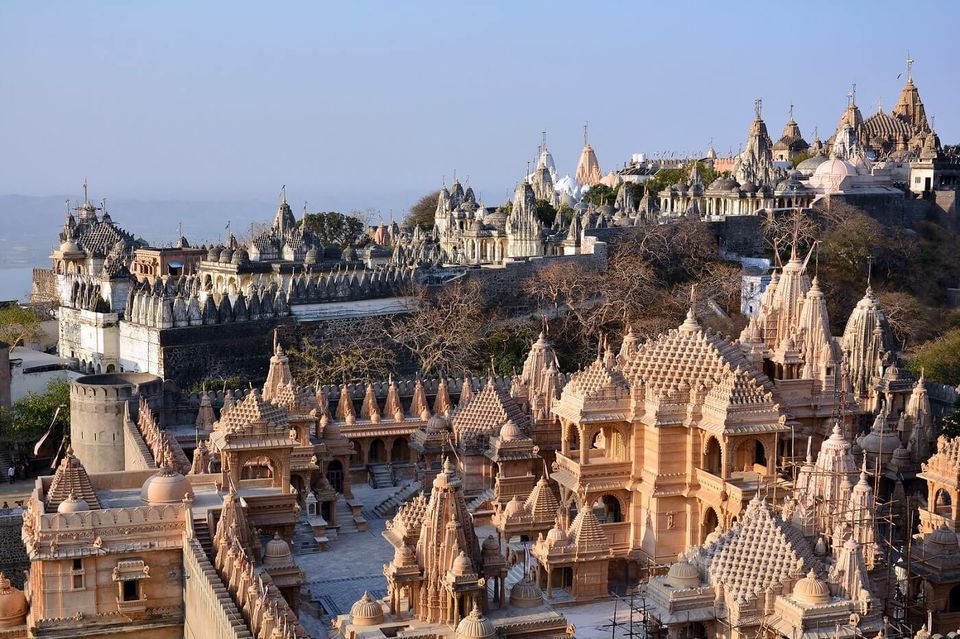 Perched on the Shatrunjaya Hill in the city of Palitana, these Jain temples are considered holiest along with Shikharji in Jharkhand.

Originally the construction of the Palitana temples started in the 11th century during the reign of King Kumarapala and it took 900 years to complete.

It was destroyed by the Muslim invaders between the 14th and 15th century.

As Jain pilgrimage is mostly taken on foot, the temple was constructed in clusters to minimize the distance to a bare minimum.

The complex is vast and comprises of 863 Palitana Jain Temples entirely made up of marbles.

The main temple is set at an elevation and can be reached after climbing 3500 stairs.

It is dedicated to Adinath, the first Tirthankara of Jainism.

The main shrine is made from marbles and adorned in gold and precious stones. The sculptural splendour makes it one of the most exquisite in the country. Other noteworthy religious landmarks include the Vimal Shah, Kesharji and the Samavasaran Temple.

The followers of Jainism visiting the Palitana Temple believe that it offers a lifetime opportunity to achieve nirvana.

During the monsoon months, the temple remains closed.