The official trip to USA, gave us an opportunity to visit one of the most powerful capitals in the world "Washington DC". The Three Stooges Sud, Ark and TP packed the bags and got an early morning Greyhound bus from Raleigh to DC. Rain had spoiled one of our weekends and was in all its glory to ruin the last one too. None of us wanted to stay put in the Condos, we took a chance against the storm which was supposedly going to hit the eastern coast. Our mightiness probably scared it and it moved away from the coast into the ocean on the Saturday morning.

The bus got us to the Union Metro station from Raleigh via Richmond. We never knew the life would be that difficult without GPS, especially when we had all the necessary print outs. To our surprise the exit we took looked no where close to what was in the map. There was almost no one in the streets excepts for cabs asking us for a ride. We had more confidence in ourselves than the cabs so we just didn't care about them. In the end we were lost. Fortunately Sud chipped in with his mobile compass and the map in the bus stop directed us to Capitol hills.

The place looked more like a tourist place than a capital. We saw more tourists than the natives, which was quite uncommon for us. This took monkey off our backs and we were comfortably roaming around to the Capitol Building. To our misery the Capitol was under construction. Certainly It didn't look as good as it looked on the dollar notes i had. That didn't stop us  to get some snaps before moving on to the "national mall". No it was not the shopping mall like phoenix, its a two mile green stretch with the US Capitol and Lincoln Memorial at the ends. This also houses the Smithsonian and White house. I don't have any hesitation to say its one of the most powerful and historic stretches of land in the world!

We had booked a tour inside Capitol which was around 0230 pm (this can be done online from US Capitol official website). I was around 10 in the morning, we had enough time to visit a couple of museums (at least that's what we thought). We focused on the most popular one the Smithsonian Air and Space museum. The museum was so big and suited almost everyone's interest, and that meant all three of us were on our own after getting inside. From jumpers to wingers, gliders to balloons, passenger aircraft to fighter jets, satellites to spacecrafts you name it they had it. There were cockpits on display too. I got answer to one of the questions, i had in my mind from childhood days "How do they go to bathroom in space?". Everyone remembers about the first flight which brought Oliver and Wilbur to our textbooks. We got to see the "thing" which brought Wright bros the fame. The original first aircraft to fly. We were running late to our Capitol Visit by then. We spent more than 3 hrs in just one museum. Oops! poor execution of plan.

We walked briskly to the Capitol and managed to get inside on time. It took me a couple of mins to believe I was inside one of the pieces of history. We got our passes and guide allocated. She had a quick intro and we were on our way. The construction/restoration work was in progress even inside. It wasn't as great as it should have been, however we accepted what we got. We came to know how the monument got all its statues, what changes have taken place and a bit of history. The tour would have been of 40 mins and we were on our own inside the visitor center. We visited the souvenir shop and managed to get some memorabilia for ourselves. That is when we saw the door leading to library of congress. We couldn't stop ourselves, but almost ran to the place, and got back. By then We didn't have much time before the museums close. We took a few selfies around the Capitol hill and its garden, walked out way to Museum of American Indian. Again it was about the Indians with a feathered caps. At 0530 in the evening we wrapped up and went to the Hotel we stayed at using a Metro.

It was Sunday, we checked out at 0930 in the morning and reached the other end of the national mall, Lincoln Memorial. Its considered one of the tallest structures around built more like a Greek temple in Zeus style. It was crowded with tourists and probably gave the best view of Washington Memorial aka Obelisk with Capitol on the background. We were fortunate enough that the sky was clear and the visibility was certainly better than the previous day. We took a snap and walked along the " Forest Gump " pool, or the reflecting pool. We visited World War II memorial followed by White house. We though we had a pretty close view of the White house. To our surprise we could see a few "guards" on top with guns pretty clearly. Obviously the view would have been better for them :P. It was afternoon and we had only 4 hrs left . Hunger was not helping us either, We decided to get into the second most visited museum in the world "Smithsonian Museum of natural History" and rushed straight to the cafeteria. Got us recharged, went to souvenir shops, got some stuff and again on our own went to hunt our liking.

We just added up the numbers so that the natural history museum remains as the third most visited museum in the world (if not higher). Once we were inside we knew why so many people visited the place. Each of us had their own taste , Ark focused on the Gems section went straight to the Hope diamond. Wonder why it got its name when its considered one of the cursed stones in the world. Sud focused on the evolution of humans section, and I tried a one on one with one of the largest creatures  ever existed on earth – Dinosaurs. i wont have enough words describe, probably the images would help. The day was almost over and we wrapped up and rusked to the bus station to get our bus back to Raleigh.

One can spend pretty much the entire day weaving in and out of the several museums. There was so much to see with so little time, we bid farewell to the place with a feeling in heart - ' We will come back again' .

Best place to know how humans learned to fly , how it evolved, where we are and whats in store. A place where kids and parents can learn. 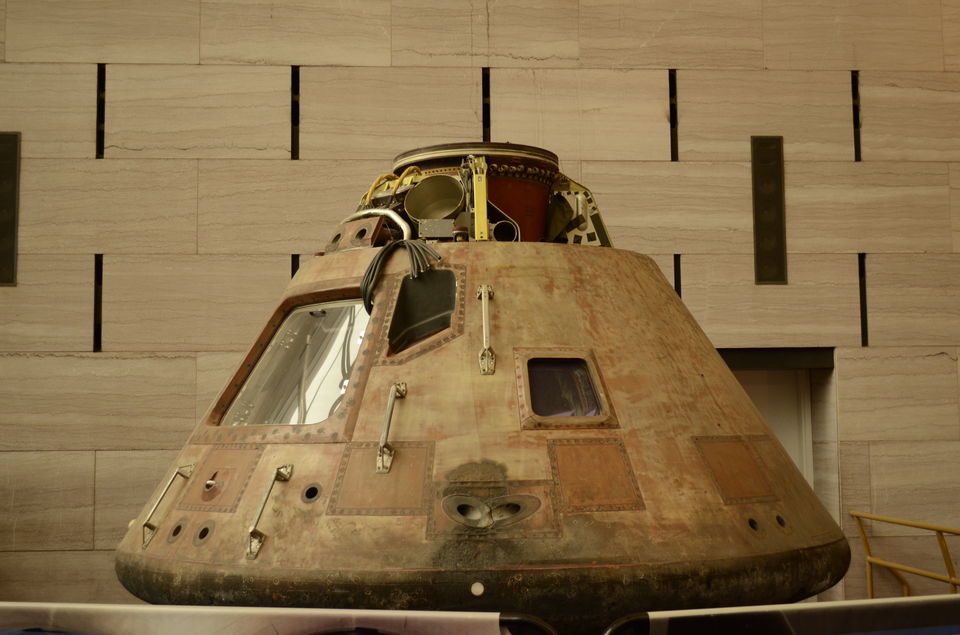 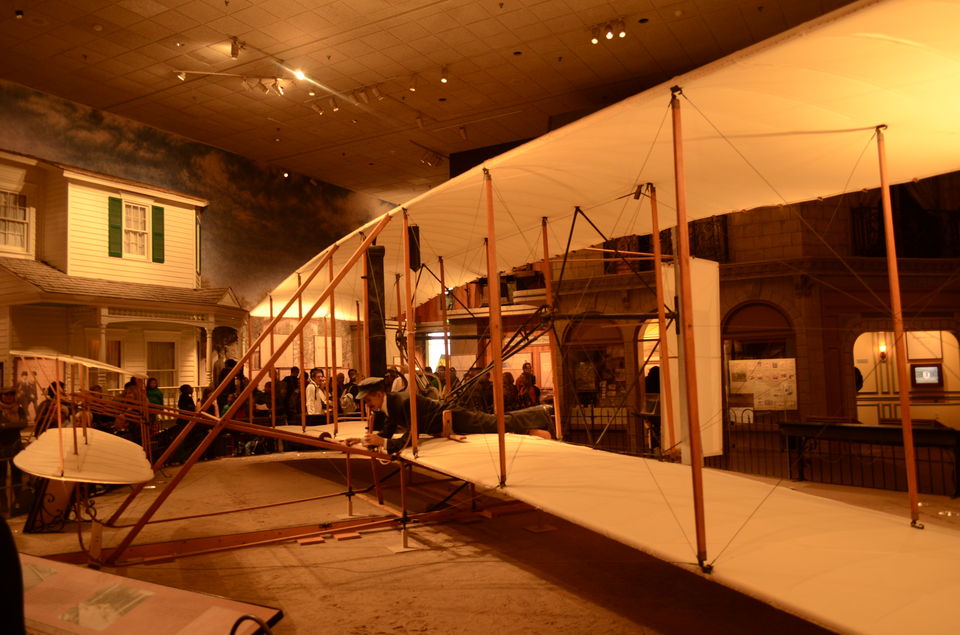 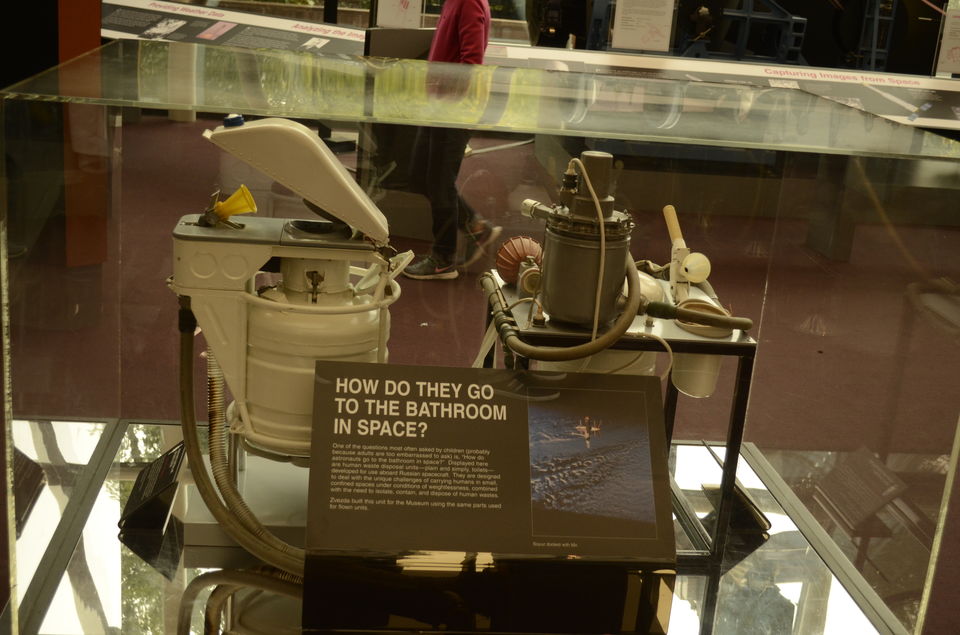 The place on every $ note. Who wouldnt be excited to see it from the inside. 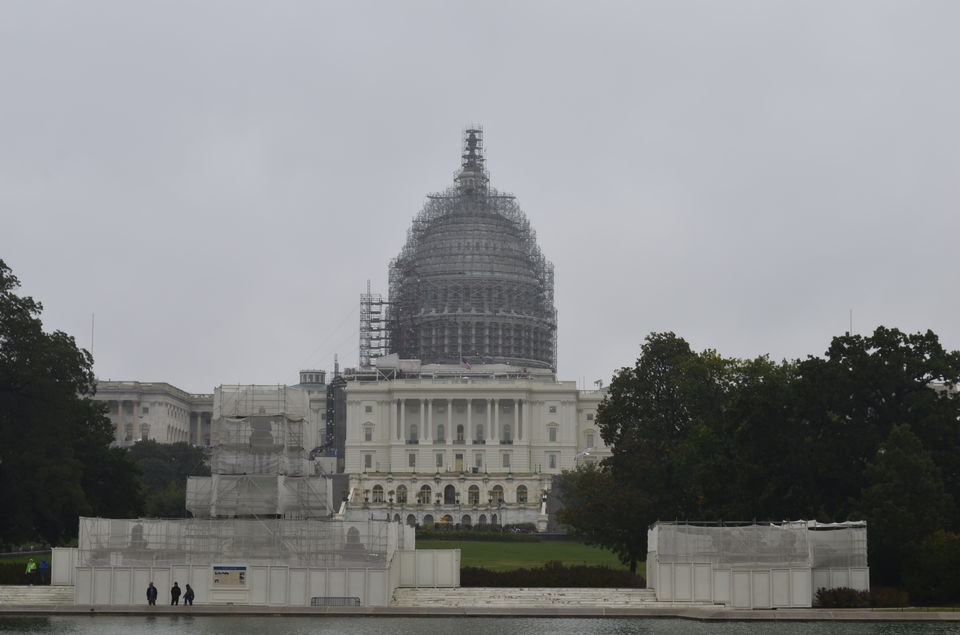 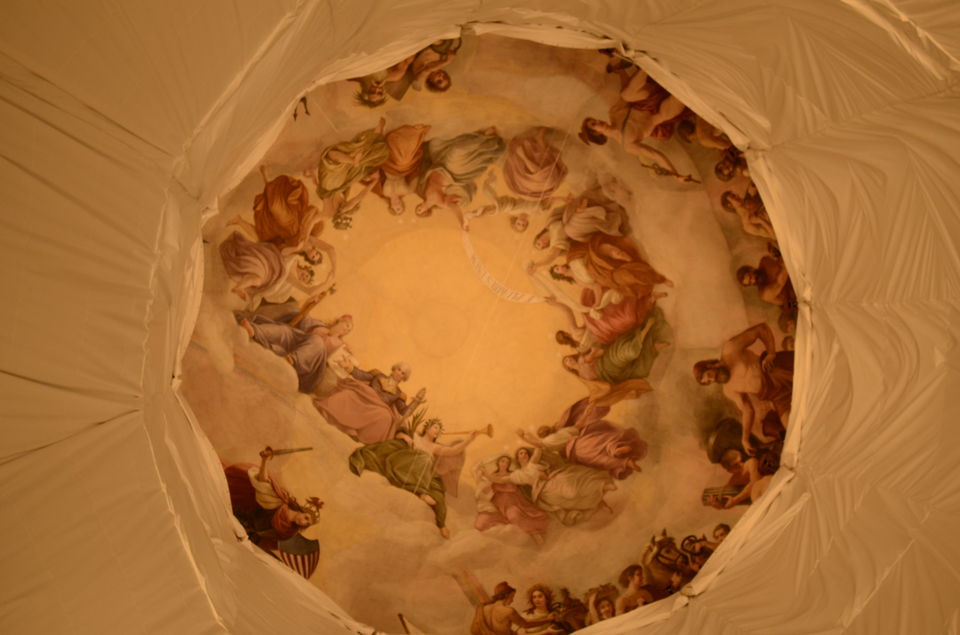 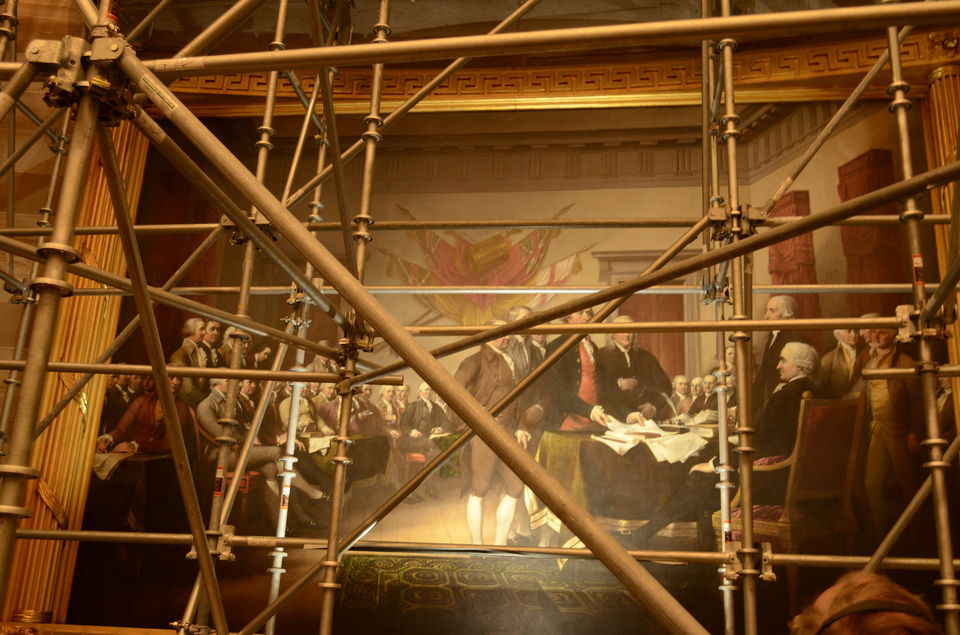 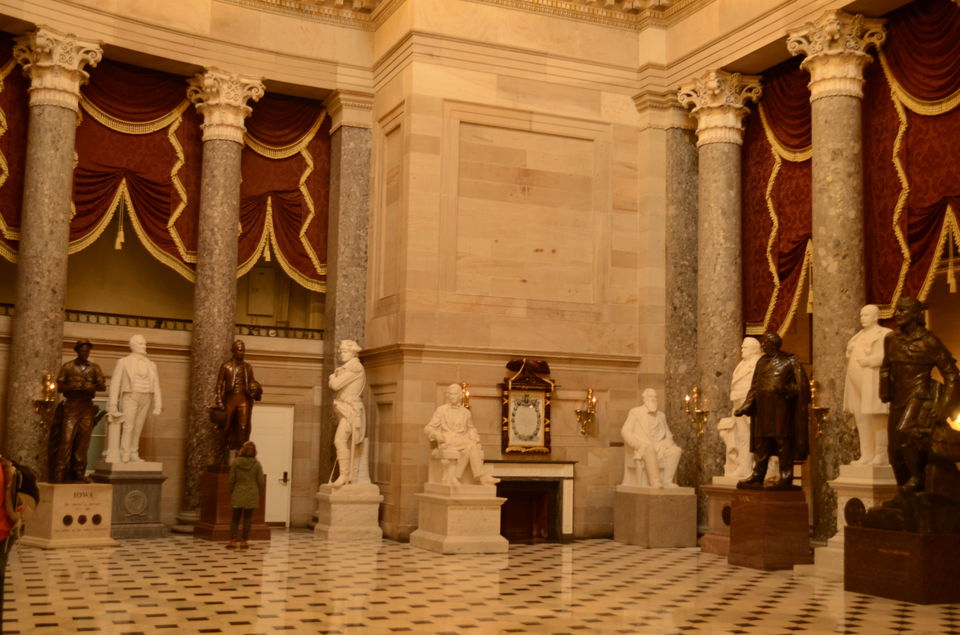 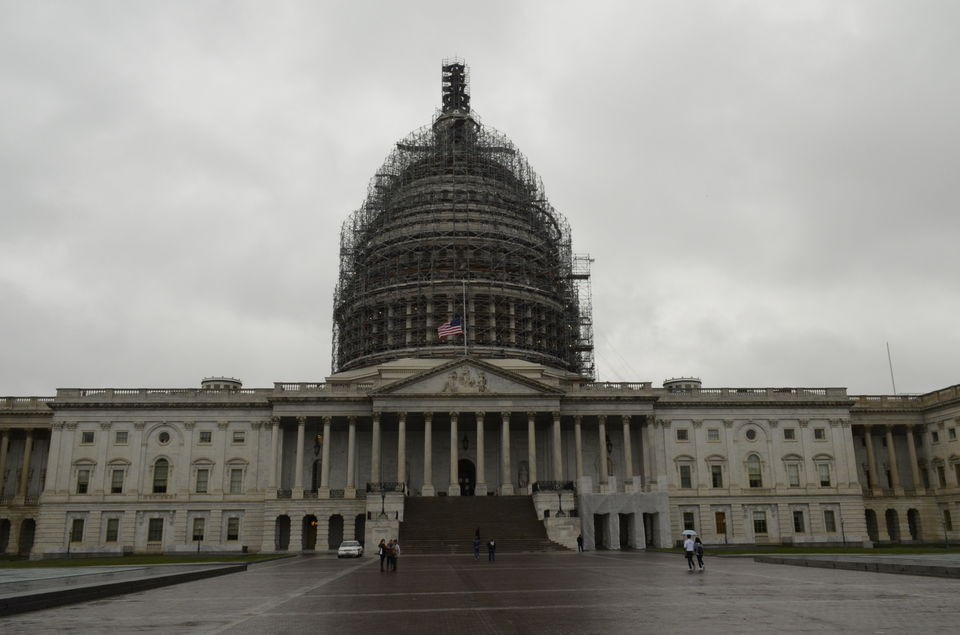 Near Metro station, Easy to commute from Washington DC.

Best place to get a view of Washington Memorial, The Capitol and National Mall