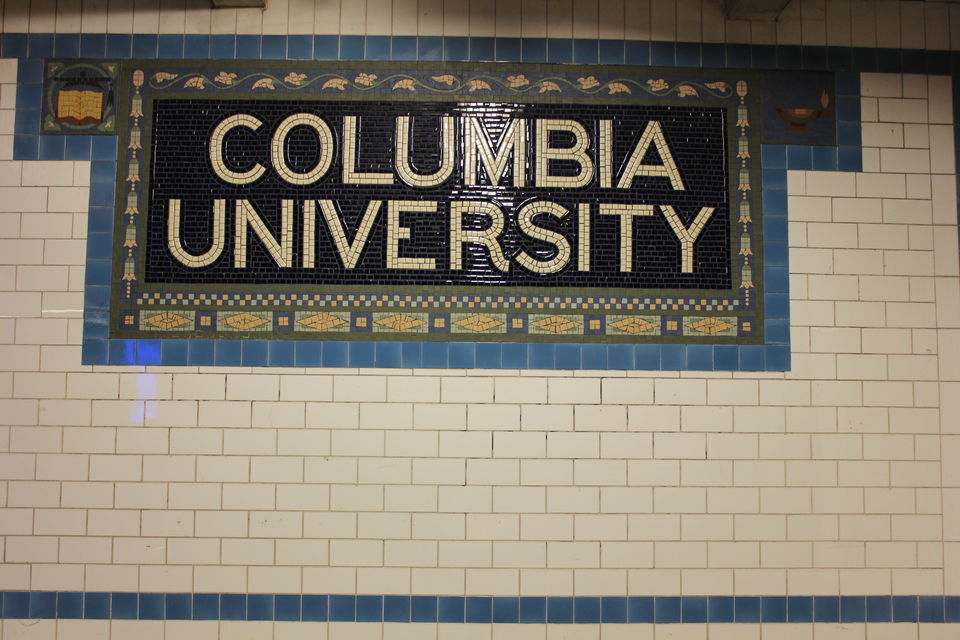 It was a sunny day in New York -the last day of my very brief but thorough visit to the city which I fell so deeply in love with. I say thorough because the previous two days were a full-on solo excursion with barely any free time. I walked miles along the 5th Avenue, rode the Subways, saw the sights, and ate and drank like the curious foodie tourist that I am. Now on that last day, I was taking things a little easy. I walked out of my Airbnb at 7.30 AM with no definite plan. (Yes, 7.30 is taking it easy!) On the bus to Manhattan, I decided to check out the two major Universities in the city, the NYU and Columbia.

I did what I had to -walked around the campuses, took selfies, indulged in some amateur photography, asked strangers to “kindly take a pic of me?” One was an old Chinese lady who spoke no English but directed me the best in posing. It was then time to return downtown.

I was waiting for the Subway at the Columbia University station when I encountered a rather cheerful middle aged African-American lady. It began with a polite nod and a small smile. She broke the ice by saying, “It’s so hot out there!” I didn’t think it was the case but I simply agreed with her while simultaneously checking out this throne like chair installed on the platform in someone’s loving memory. It was made of wrought iron complete with a crown like structure attached to its back-rest. There was no way I was sitting on it while waiting for a train which was anyway not going to be more than five minutes.

My new found friend however decided to have a seat on the throne. Now given that she was a mirthful old lady as mentioned before, sitting on a throne like chair was bound to induce ideas in her. I heard her calling out for someone in her rather raspy voice. Since I was the closest to her vicinity, I naturally looked around.

“Would you mind taking a picture of me real quick?” she asked.

I took a few pictures of her with her rather modest borderline smartphone. I made sure I captured the contours of her “throne” and included crown within the frame. I also urged her to smile which she definitely did. I gave back the phone for her to judge my work hoping she liked it fine.

Did she like it? “This is nice…” she began looking at the first picture. I knew there were a few more to come. The second picture had better lighting - “Oh my lord, this is good!” I knew she was being honest judging by the tone of her voice which also made sure everyone on the platform was now aware of what was going on at our end.

Scrolling on to the next picture, she literally cried out “Oh my honey boo boo! These are wonderful pictures… You’ve made my day. You’s good!!!” If her words were kind and genuine, her laughter was infectious and captivating. It was the kind completely devoid of reservations, - open and unrehearsed. I don’t know what my own reaction was like - I guess it was an awkward mix of amusement and embarrassment.

About a minute later when she was done being pleased with her majestic pictures, she asked me, in between short laughs, if I am from the Philippines… When I said, ‘Err, no, I am from India”, another bout of laughter ensued -this time mixed with confusion. “You had me good there! With your cap and sunglasses, I couldn’t tell!” I smiled and mumbled something I am not quite sure what - perhaps saying it’s okay.

As the train approached I wished her a nice day indicating my impending departure. She, still beaming from her throne, said, “Thanks for the laugh… I needed it”. Moments later, I was standing in the rather noisy NY Subway, smiling to myself, my day definitely made.