Indonesia Travel GuideIndonesia TripsStories From My Backpack: How I Met Bollywood In A Small Indonesian Town

Stories from my Backpack: How I met Bollywood in a small Indonesian town

In March 2017, I travelled Solo to Indonesia. A week into the trip, I was in Eastern Java, Indonesia, hiking around Mount Bromo . After I was done with it, I was headed to a small town named Probolinggo where was I looking to take a train which takes me further east to a town called Banyuwangi. I hopped on a bus to Probolinggo from Bromo amd made friends with some other solo travellers in the bus who had similar plans. After 90 minutes of a very tiring bumpy ride, we were in the Train station of Probolinggo. We were late and missed the morning train by 5 minutes. The next train was after 5 hours. So, we took the tickets and went to a Train station restaurant to get some food. This small restaurant didn't have much selection as they only served meet balls. Apparently the other travellers who were with me didn't like them too much and so we moved out of the station to find some rice meal.

As we were walking along the road, I could hear a stereo playing bollywood songs from the 90s with heavy beats. I stopped for a second to make sure I was actually listening to a Hindi song and not hallucinating. So, I crossed the road and made my way to this small food stall/shop. I really wanted to see who listens to Bollywood in the middle of a small town in Java. It turns out, the stall is run by a very sweet middle aged Indonesian lady. I introduced myself and she was very excited and happy to know that I was from India. She told me that she loves Bollywood and her favourite actors are Shahrukh Khan and Ajay Devgan. She had tons of Bollywood video CDs. She also cooked us some amazing Nasi Goreng which is Fried Chicken Rice. As we finished the meal, I went to see her TV and the video which was playing was SRK's Phir Bhi Dil hai Hindustani. I told the other travellers what that song meant and we all had a smile about it. While I was leaving, I asked her if I could take a picture of her and she obliged. She also danced, showed us some bollywood moves and I joined her and we had a bollywood dance party for 5 minutes. It was such a great day and I wish I could see her again sometime in the future.

If u look closely at the TV, it's SRK's Phir Bhi Dil hai Hindustani 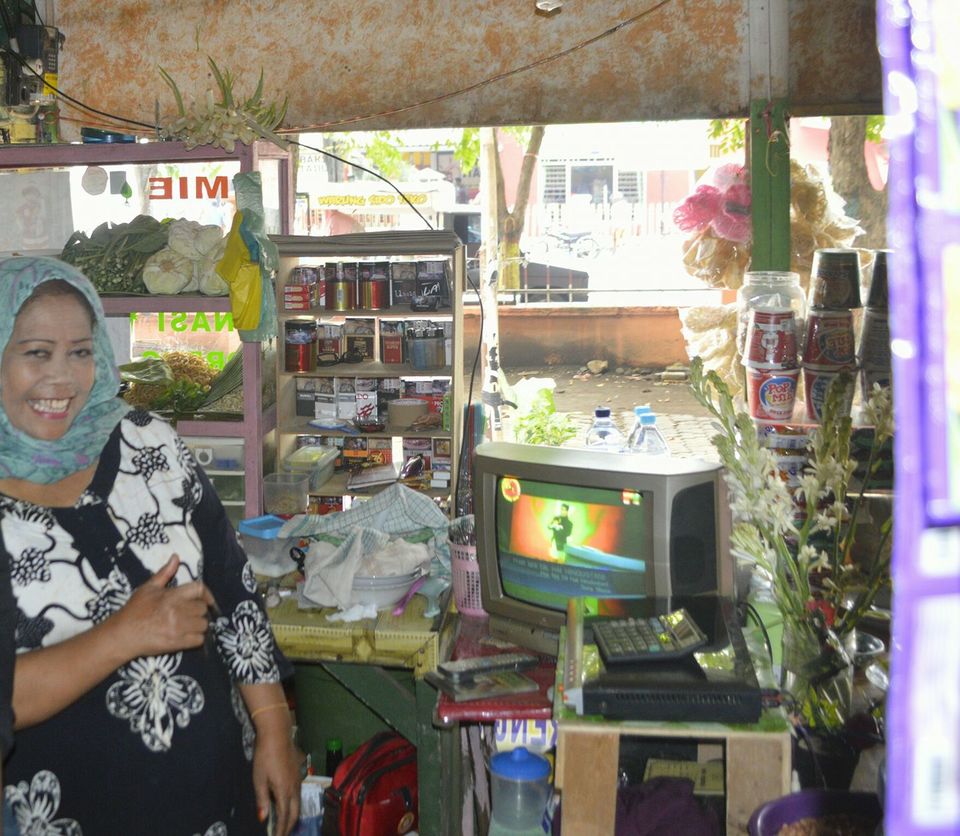