Exploring Angkor In A Saree: An Experience To Remember! 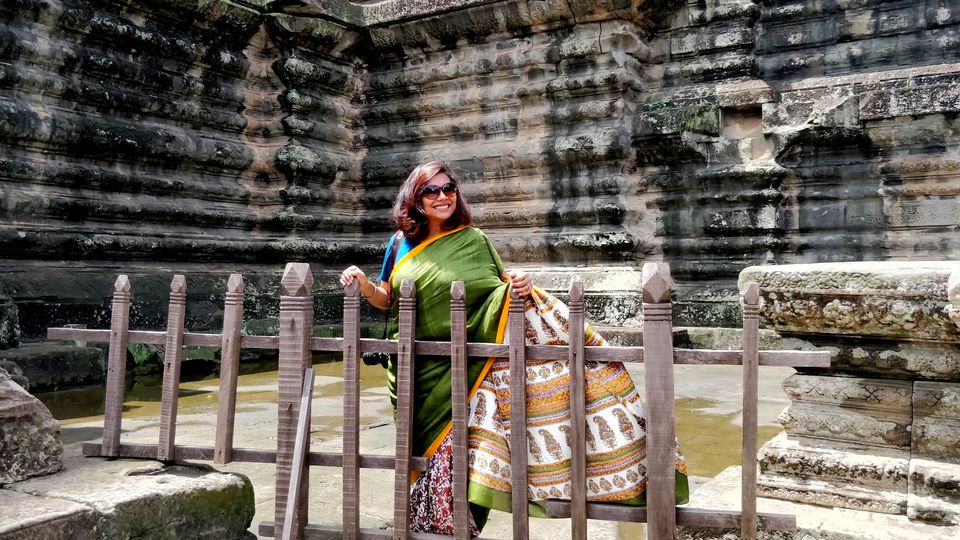 As clichéd as it may sound, like any other Bengali girl, I too have a fascination for the 9 yards, but to be really honest, I was pretty skeptical of backpacking in a saree! Until recently, when I thought to give it a try and packed one of my favorites (from Mom's collection) during my trip to Cambodia. In my mind, I was still in a dilemma whether or not I'm going to wear it, but I could imagine myself posing in front of the Angkor Wat, in a saree!

Thanks to the guide, this was pretty close to what I had imagined of! 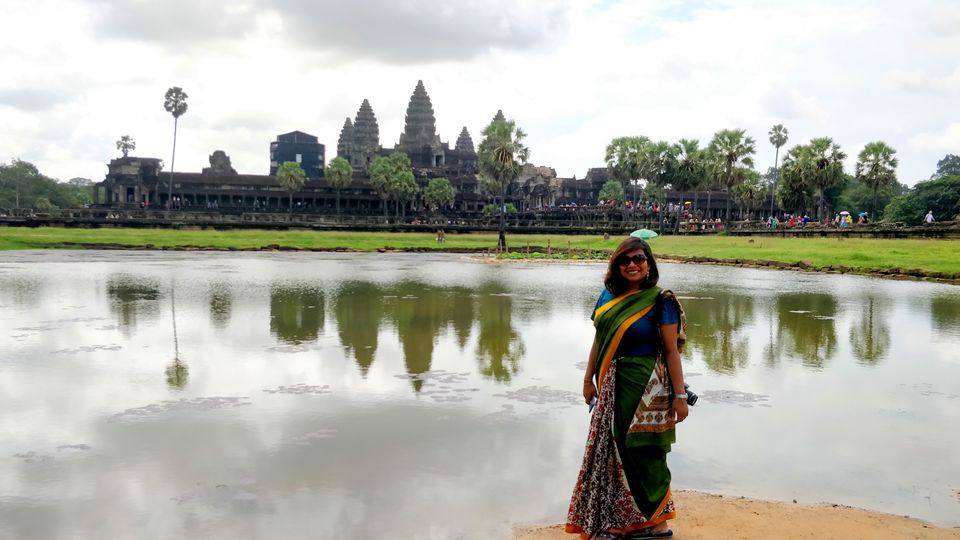 My tuk-tuk driver had told me to be ready by 4'O clock in the morning if I wished to catch the sunrise, so I had to wake by 3 AM to drape the saree and get ready before he arrived! Sunly, my tuk-tuk driver, who was also my new friend in Siem Reap, smiled as he saw me struggling a bit to get on the tuk-tuk, but his compliment did make my day! "You look so Indian", he said, as we started moving towards the temple complex.

I was a little conscious, and also thinking about how I would manage walking so much and climb the stairs...etc., etc!

But I was equally excited! Till now, all my saree scenes were confined to family gatherings, weddings of friends, and office occasions - this surely was a pleasant change of scenario! I still didn't know that the fun was about to begin!

"Indian woman always good in saree," Sunly kept mumbling in his broken English, "You look like them in movies, television!" I felt a little awkward by then!

The lady at the ticket counter also beamed looking at me, "Nice, Indian?"

I smiled at her, nodding my head.

And then, it was my guide, who enthusiastically introduced himself, figured out easily that I'm an Indian and then built a relationship between the Indians and the Cambodians, saying that we are all brothers and sisters as we are all Hindus! I was enjoying the conversation, as he showed me the carvings of Ramayana & Mahabharata on the walls of Angkor and in between, linked how Draupadi wore a saree and also Sita wore a saree! (Probably I would have missed out such detailed explanations if I was there in jeans & tee!)

My guide asked me (rather instructed me) to stop at places and pose. He was quite sure of his photographic skills and I absolutely followed wherever he asked me to pause! In the meanwhile, I also gathered the attraction of several other tourists, who wanted to come and click a photo with me!

For a while, I felt like a celebrity! There was this Chinese lady who approached me and said something like "Photo, Photo". I thought she wanted me to click her picture, so I tried taking her phone but then she started saying something more which made no sense to me. After a conversation of about 30 seconds, where she didn't understand me, neither I understood her - I figured out that she wanted a picture with me. "Hindu. Indian. Saree. Bollywood" - amidst all Mandarin, these are the 4 English words she used and was happily posing for the picture.

A few steps ahead stood her friend. She pulled her as well, and then we had a group photo together! Some other Chinese uncles and aunties also joined in, and I was the center of attraction there!

Once this whole chaos ended, my guide said that he also wants a photo with me, to show his family. I was thrilled with whatever was happening!

As I walked further, there was this man and five beautiful girls, dressed as apsaras. They were charging one dollar from people who wished to click a photograph with the apsaras. This man called me, "Photo with apsaras?" I was about to say "No", but before I could say anything, "One dollar for all, free for you!", is what he said! I wanted to laugh out loud, but controlled my emotions and walked up to the apsaras. Of course, I did want a photograph with them! They showed me how to pose, and then I got a shot with them. 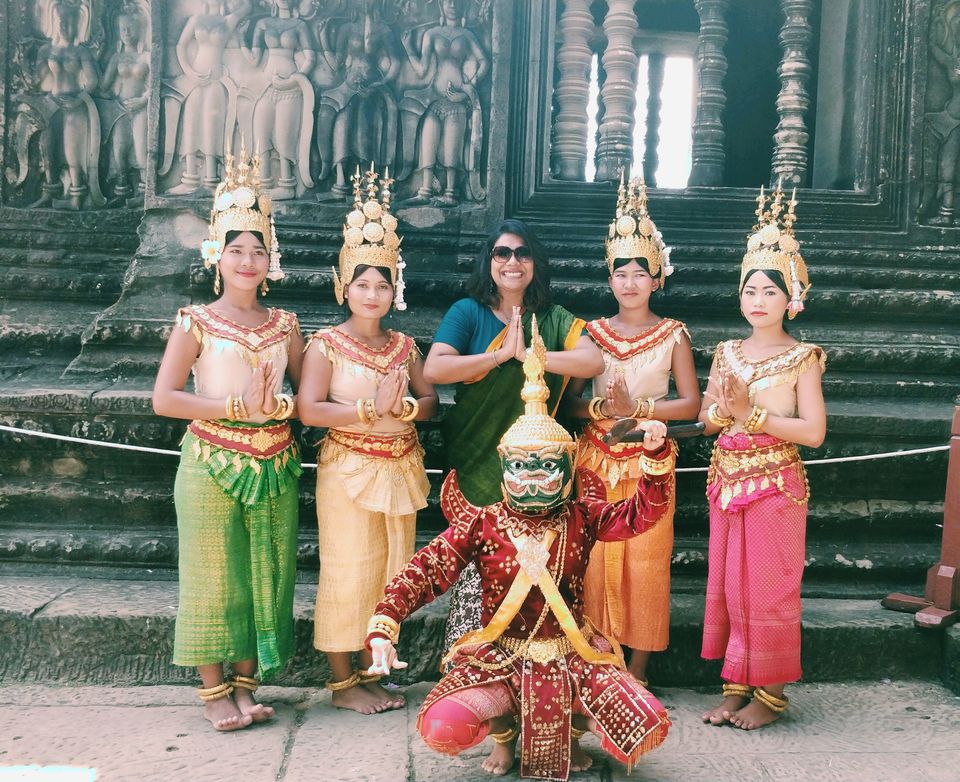 "This is like Bollywood", the apsaras giggled amongst themselves, and I was thinking how deep an impact the Hindi-film industry has made on the world! While I stood there, some other people also stopped by to click our photo! By then, the celebrity-ish feeling had sunk within me!

My eyes started looking for another Indian woman, and I wished I would find someone to give me company!

But I didn't! Nonetheless, it was quite an adventure for me to explore the Angkor Wat in a saree!

Amidst all that was happening to me, I was in awe with the eclectic beauty of the temples that date back to more than a 1000 years, yet stands with all its glory and grandeur. I was thrilled at every step, wondering how beautifully the craftsmen had worked at a time when resources were minimum.

Traversing across the ruins of Angkor would anyway be a special journey, and that day, painted with all shades of fun and amusement, did make everything even more special!

Taking rest, coz it was too hot that day, and I was sweating more than ever! 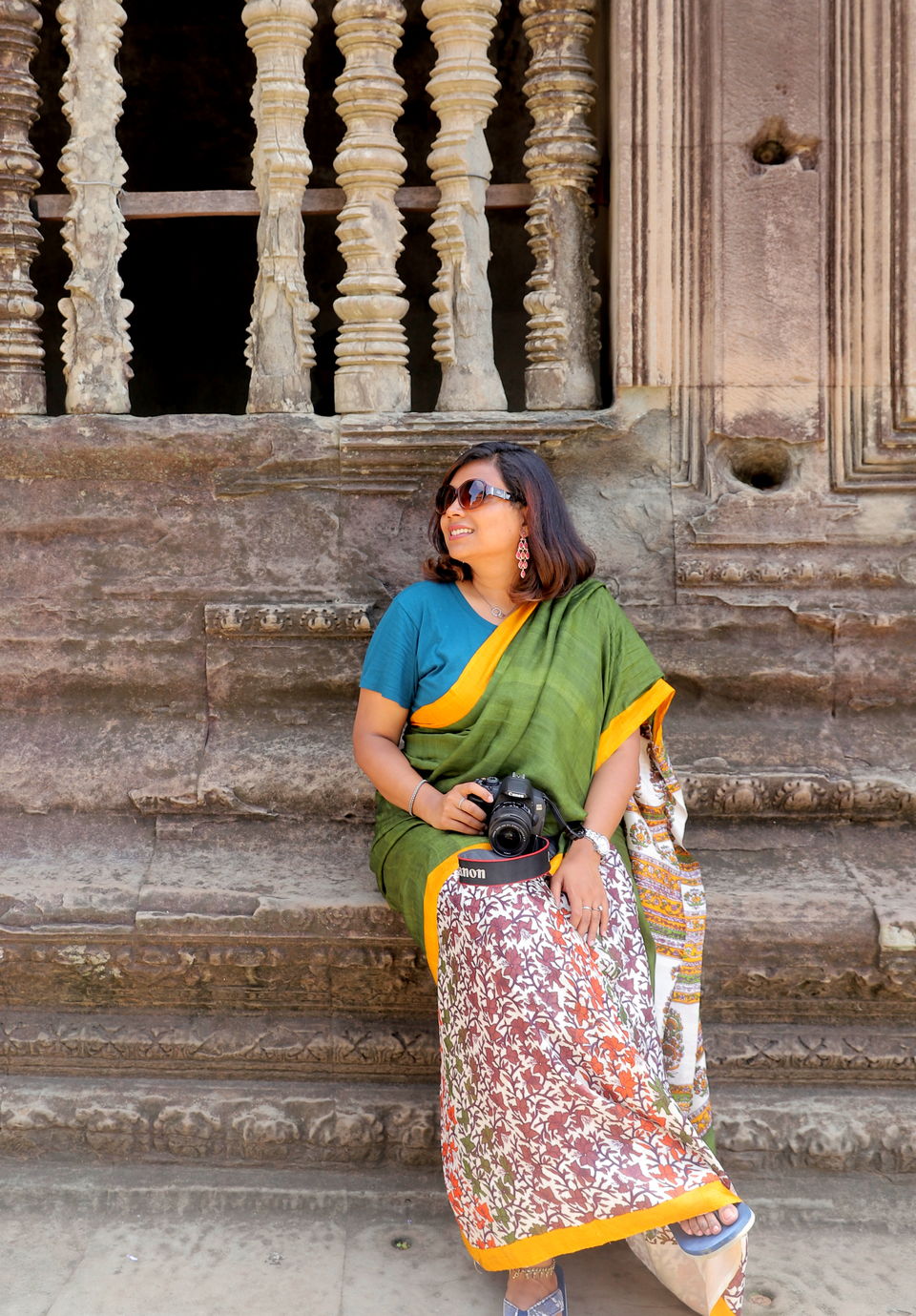 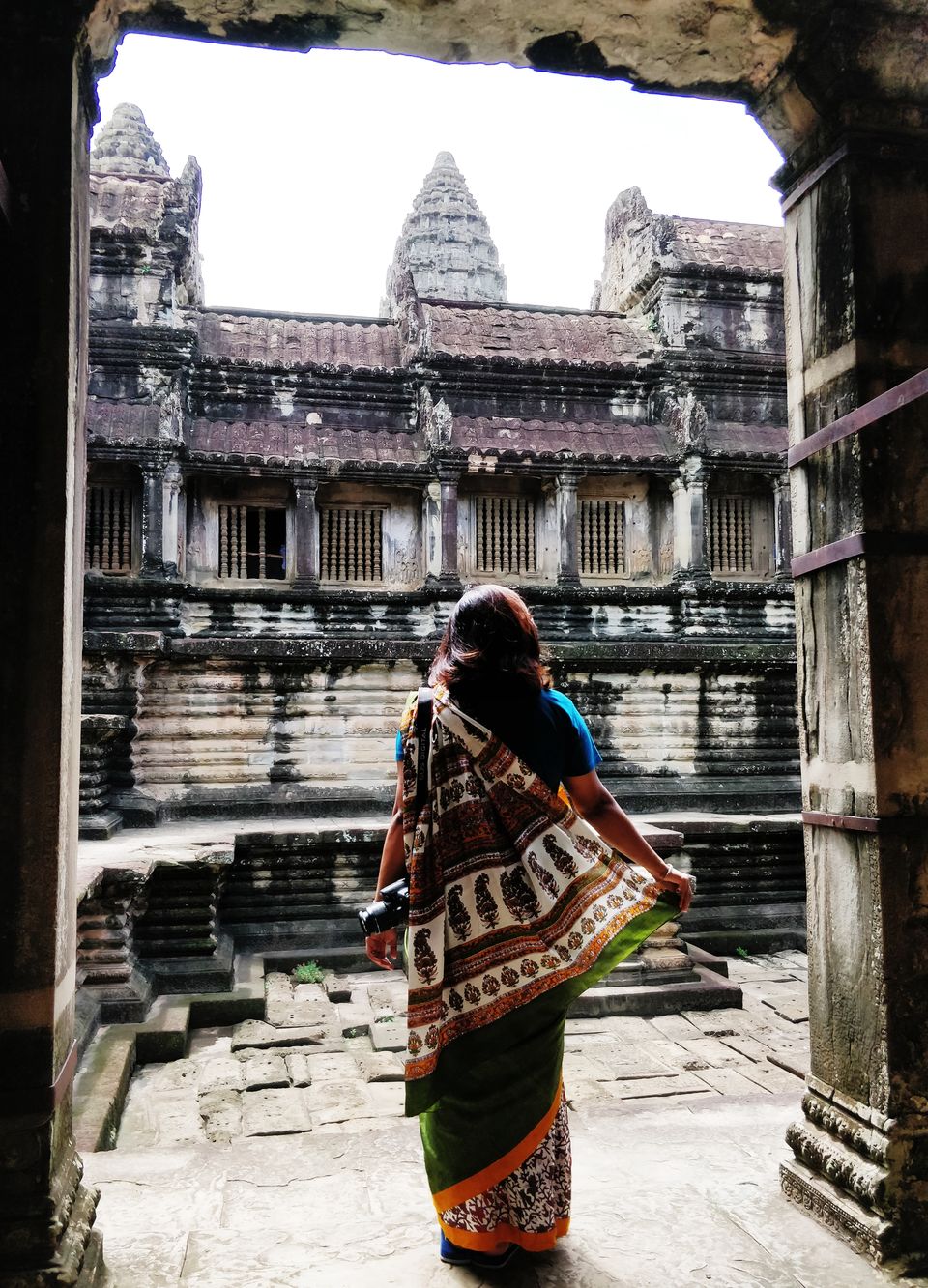 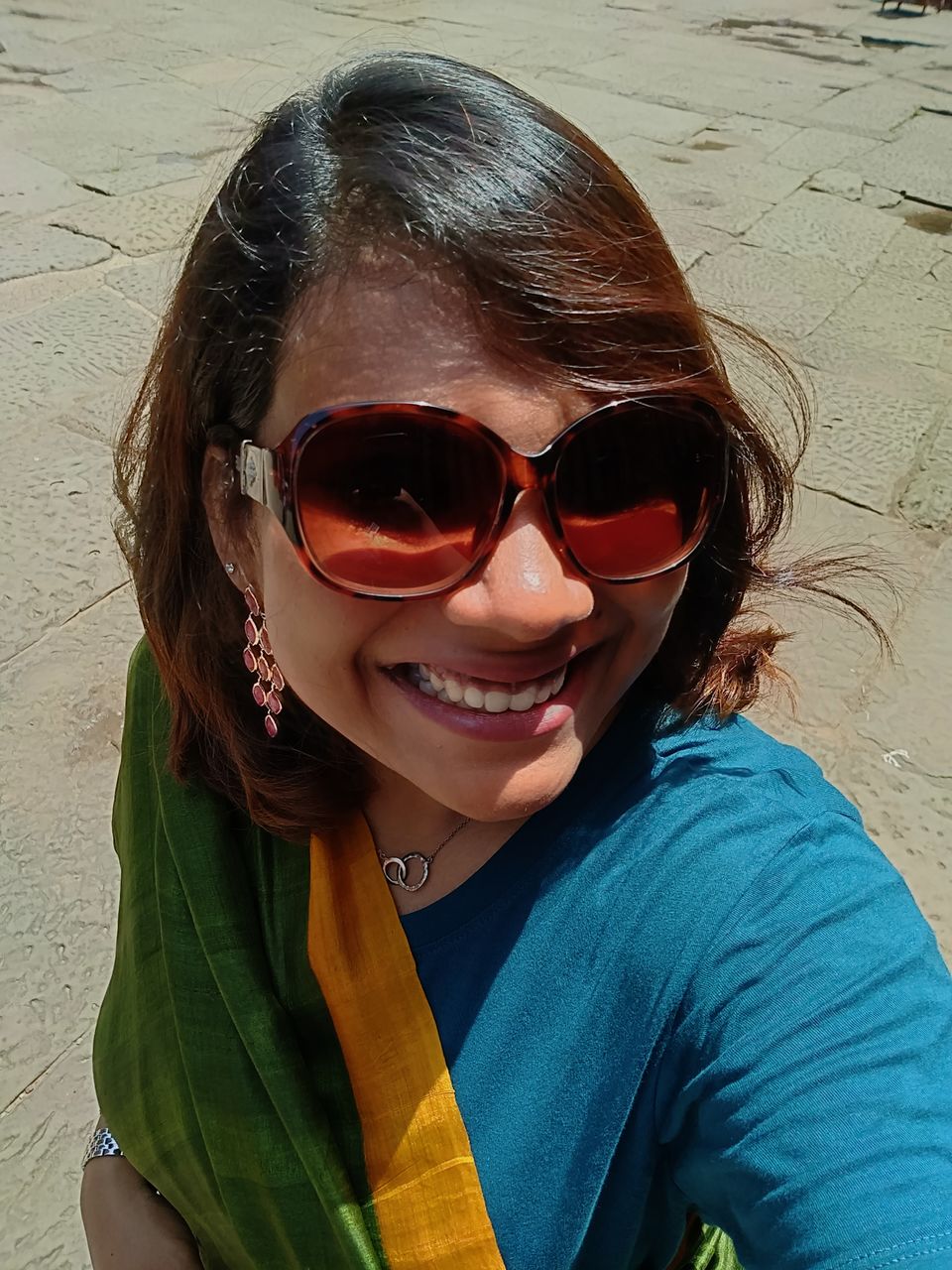 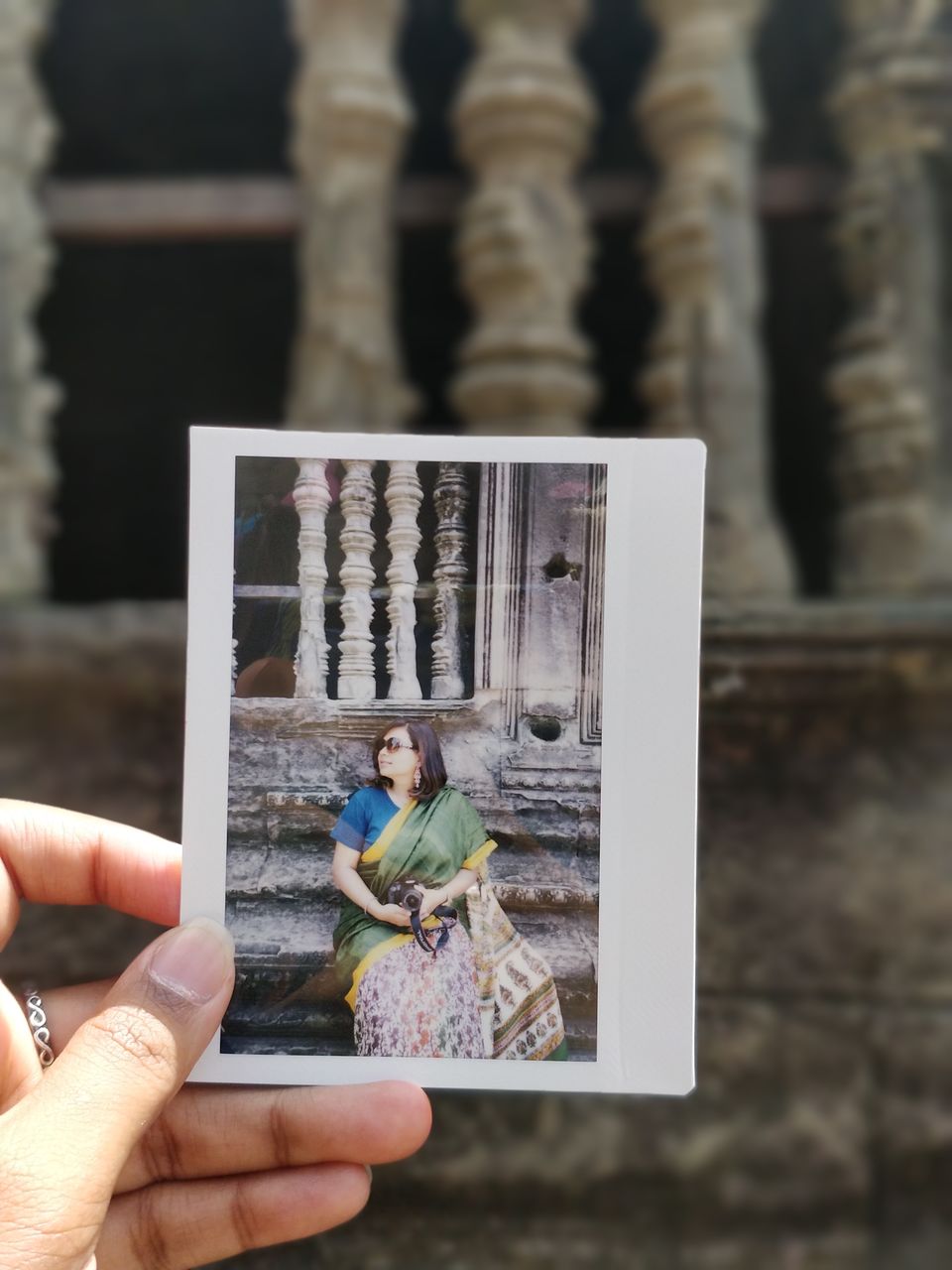 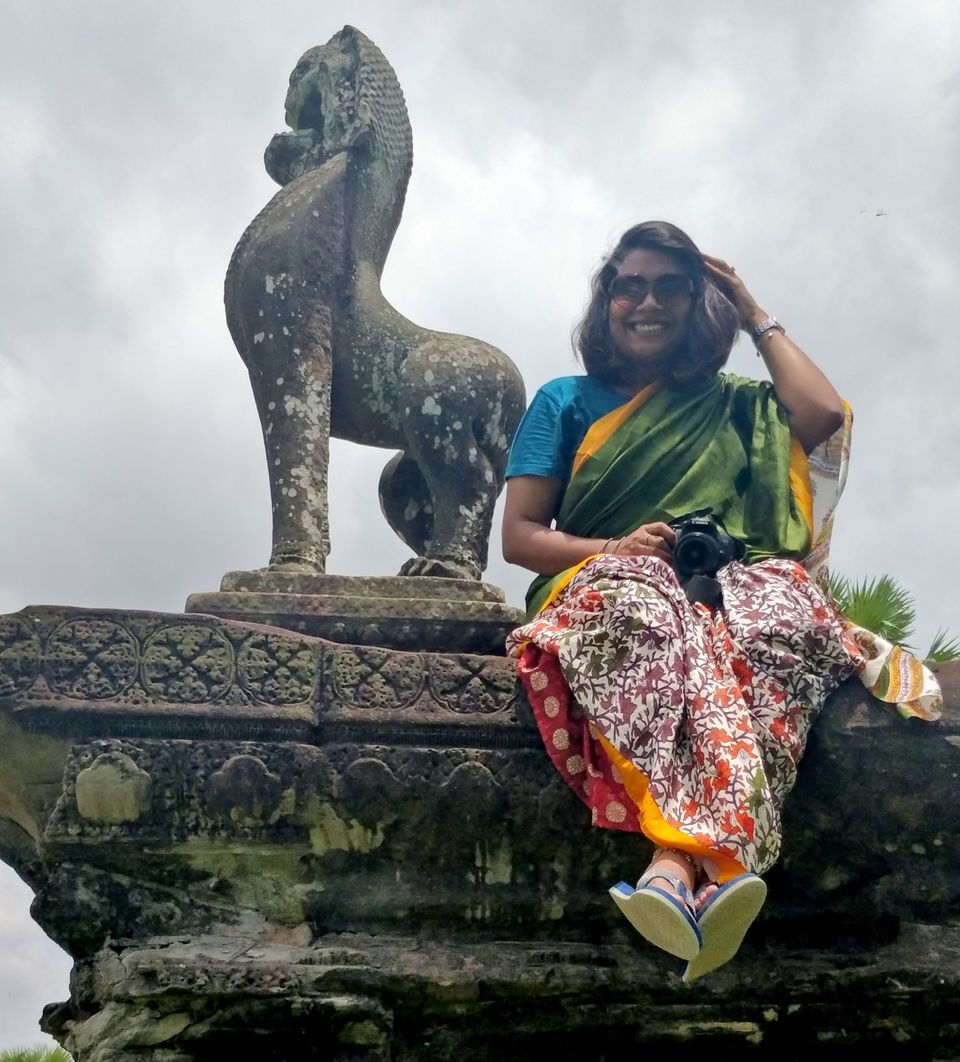 I'm sure many other female travelers out there must have explored abroad in a saree, and I would also like to hear their stories (the unusual, funny encounters) from the roads! Do share your stories, if you have any - I'm all ears!