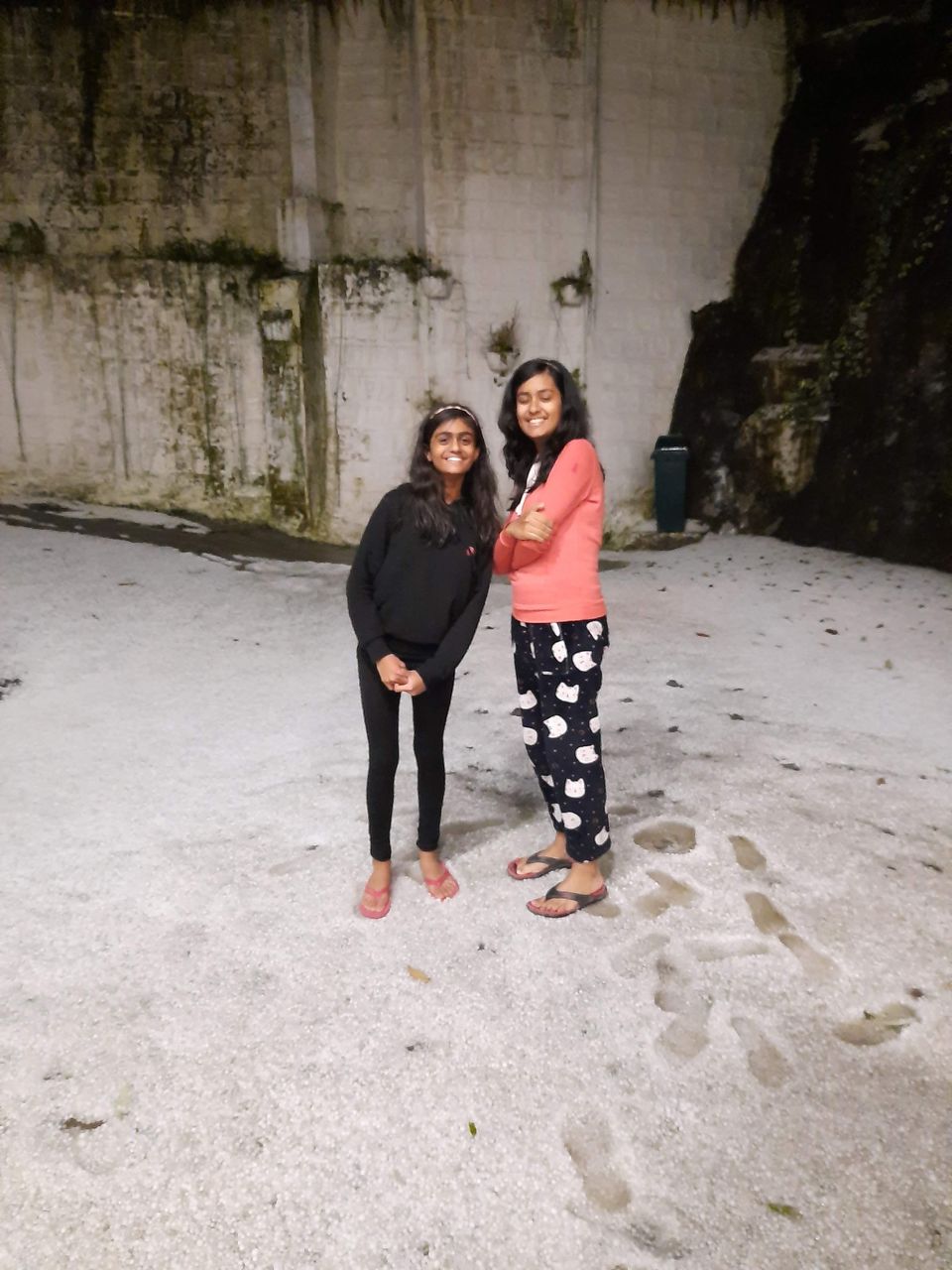 I thought we wouldn't make it.

We were in a cosy little cafe on Mall Road in the whimsical hill station, Mussoorie. I had just performed a Beatles number on the small black stage in the cafe, which had left me squealing in glee. It was raining outside, and umbrellas had slipped our minds when we were leaving our hotel. We were standing on the porch of the cafe waiting for the rain to show some mercy. Multiple layers of irritable clothing proved futile as we shivered in the cold, piercing wind and rubbed our arms. I kept on chattering about how terrific my performance was to kill time. I was talking merely to force my mind to wander from the cold. My brain had to work out somehow lest it wanted to freeze and have icicles hanging from its folds.

Then it rained harder. And harder. It was like someone had opened the tap even wider. Then the initially soft drops turned into mockeries of ice--hailstones! The gods above must have been supremely pissed off about something. We waited some more. Now it looked like someone was spitting hailstones from above. I put my hand out and snatched it back instantly as a hailstone stung my palm, threatening to sear through the skin.

Our legs had frozen. As though a curse from Queen Elsa. As the harsh night descended, people started closing up the shops. Street lights began to flicker. It got so algid that the cold seeped through my skin and reached my bones. We had to get back to our hotel. We had no clue in the world as to how we were going to do that. In a couple of seconds, right before our eyes, the road started turning white as though with fear. All the rainwater and hailstones fused to form an icy sheet on the stretch of the long black road.

It was about time we got a-movin'. One look at each other, and we all had the same crazy idea.

We had to make a bolt for it.

We strapped on our backpacks and zipped our jackets to the chin. We put our hoods and wool caps on, put our head down, AND WE RAN. Now, I swear I heard evil, villainous laughter as the hailstones fell harder at the very moment we set foot on the road.
Oh, did I mention my mom was bareheaded? Well, she was bareheaded.

We had a kilometre and a half to cover, and our path was nothing but ice-covered downslopes. Every step was heavier, more dangerous and the road twofold treacherous.
Then it began to hurt. The hailstones drummed on our skulls and sneaked into the innermost layer, making us writhe in searing pain. They hit the nape of our necks as if all the heavenly beings above had come together to blow dart us with a hailstorm. But we kept running. From a distance, I bet it looked like we were rats being struck by lightning and scurrying away from our doomed fate.

We ran, blinded by tears that sprang into our stinging eyes. The white road stretched infinitely into the distance, disappearing into the night. I imagined wolves coming out of the dense forest behind us in hot pursuit. It rained and hailed all at once. At one point, I got so exhausted I just wanted to lay me down and wait for the cold hand of death to put me to sleep. We weren't running anymore but staggering along and pushing each other forward.

That was when I thought we wouldn't make it.

Then came the steepest slope ever, which was the last strip of iced road to our hotel. We started downwards, taking small and sturdy steps--a lousy attempt to avoid toppling over like bowling pins. Everything happening was already playing like a movie in front of my eyes. Then I got innovative. I took a few quick steps and started skidding down the slope. The others tried following my example, but I wouldn't say they were happy with the results. It was like we were characters of a cartoon show. One nearly fell flat on the face, and the other kept flailing her arms like Tom when he slips on a stick of butter laying on the floor. It was downright hilarious to watch a family of crazy people coming down a slope covered in ice, looking like absolute imbeciles!

When we got back to our hotel room, we threw off our jackets and shoes and split a score of hailstones all over the wooden floor. They were like small white marbles that were nestled snugly in our footwear, pinching us constantly as we were running.

We were laughing and screaming like maniacs all the time that we were running. We knew we could not have done this any other way but together. In that moment of madness, I loved my family more than ever. Euphoric. Ecstatic. Our adrenaline had frozen in our veins. Yet we were laughing like hyenas, our laughter ringing in the dark hills of Mussoorie. 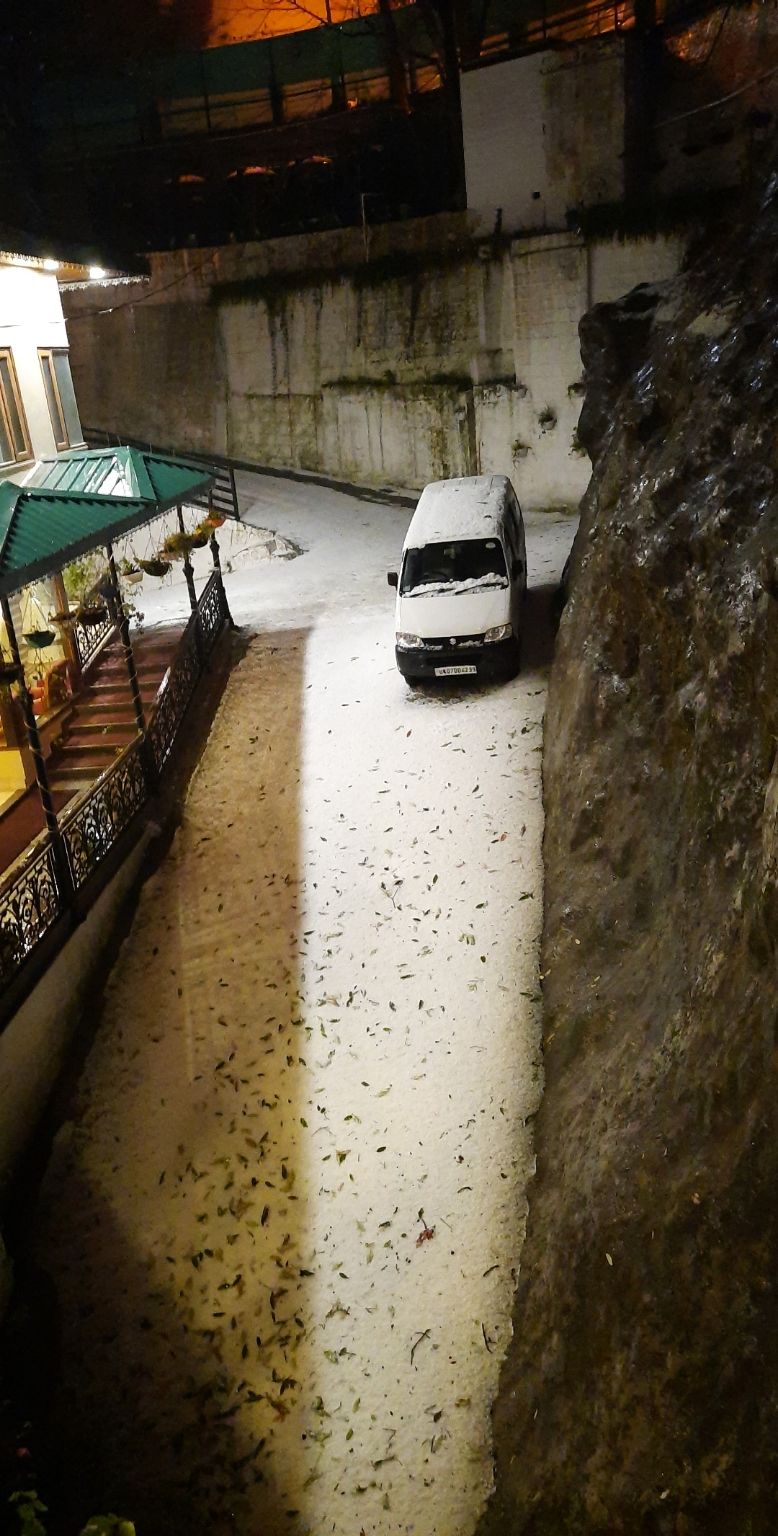