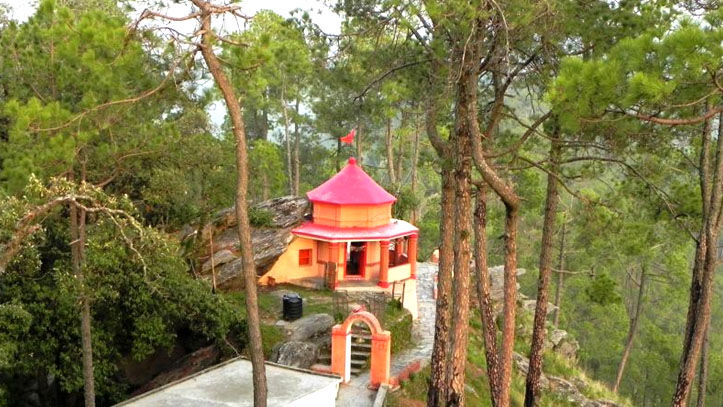 After the Jageshwar philosophy, now go to Bhole Bhandari's second dham. Yes, they are moving now to see the Gannath temple. This temple of Kotwal village, fifty kilometers away from Almora, is built inside a cave. Due to this there is not enough facility to go, this place is very untouched, but it is hidden in the ordinary language so far. We also introduce people to this place because this is a temple of our village and sometimes we go here for worship reading. Well this is sometimes very negligible because in my memory, I've just been here two times.

The thing is very old, that is, two thousand fourteen hours, till then there was no car there, and we had to book a car to come, even if we had a car, we would have to go by the second car because the place It is not good for small trains to come. There is a direct climb in the rocky road, which is afraid of reversing small trains. Therefore, on the first day, Papa talked to the speaker of the night and he agreed to go for two thousand rupees. The next morning at 7 a.m. we stood in the waiting room of the car parked under our house. He did not take any time to come because he did not have to wait for long. There are two ways to go from Almora to the first, by doing the same with Someshwar and the other with Takru. There is little risk in the rainy days of the rainy season. By looking at the open blue sky we made the idea of ​​going to Almora Takula.

Our route was something like that before going home to Dinapani. It is a place of Almora where you can see the view from both sides above and the beautiful Himalayan range is seen from here. We are on the same road from Dinapani to Binsar. Welcome to Binsar Wildlife at the place. These boards are set up which are seeing as we are going to Binsar. When we reached seven kilometers ahead of Dinapani, we reached the place named Ayanapani. Here a diversion is found, a road goes towards Binsar and the second is Takula's side. We bypassed Binjar road and proceeded on Almora Takula road. After reaching ten kilometers further, we reached Basoli. The name seems to be a bit strange, Basoli, but the club mahindra has made its resort here. Well, there is no special view from this place. There are also very good places to be built on the back and can be resorted to. Well, please make us like wherever we want !!

Still, our destination is far away, but it has to move further. Walking six kilometers, Takula (Kotwal village) reached. Now !! Now, do not come now! Now the Takula Bageshwar road is about two and a half kilometers away. Still not come, now the driver of the real exam is coming. From here we proceed to Takula Gananath Marg, which is the way of the forest department. It seemed like an endless way, a thin road and pebbles lying on it, in which anybody could slip. By the way, we kept on celebrating that there would be no train from any other side. Only one car can be stagged in this road. Lastly, we reached Mallika temple after traveling nine kilometers on this road. Well, we have to go here too, but some work of the temple is such that it should first go to Gananath. Let's go again and again on this road, but now we do not have much to go, just three kilometer journey and we reach. But this is what started from now on foot, but not much, from here, about two kilometer to go to the village, then there will be a debut in the temple. At the time of landing, it was easy to get up early and reached Ganath.

No crowd, no shops, it is far from materialism. After entering a small main gate, there was a large courtyard in front. The specialty of this temple is that one is situated in a cave here and the other is that it is naturally watery by the batons. People here come here to see this. After the worship ceremony we returned to the Mallika temple. Now it takes some time to raise the top, there are pools of peach trees on the way, it will be very good in the days of the season. Once again in the carriage we walked on the same path that had come and the temple came in three kilometers. This is a Goddess temple at a height. There is a big contradiction in both the temples, one is down and the other is at a very high altitude. These temples are built in the lap of nature and the panoramic view of the Himalaya range is seen from here but we are not so fortunate, we have not shown anything to us. Just after Babaji made a tea in his cottage, the stomach was just like the hungry bhajan na hapa gopalala. Well now our hymn program has happened, now the next goal is to get down from here carefully to Takuluda and make some tea breakfast. Just as if it got back from this dangerous road and thanked God for getting back safely. Now there is a direct route, in the Almora Bageshwar road near Kangadina, we got a small tea breakfast shop and we camped there. After two rounds of tea, gram and whole blown, we got out of the house. See you soon ...