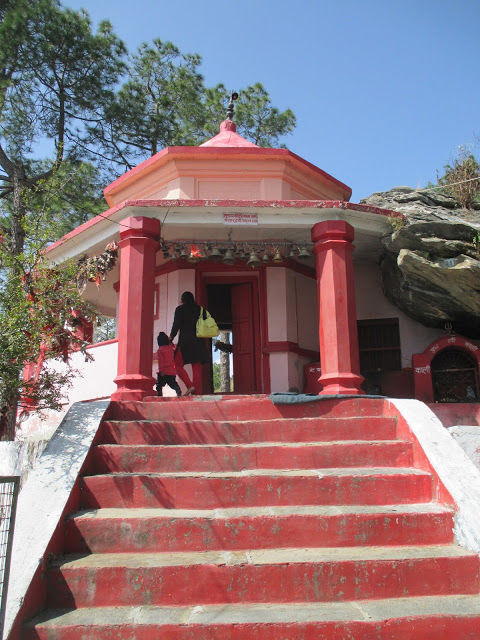 Almora is also known by temples as well as its narrow-minded Marrods and those with rattling speed. The passenger who comes from outside, can not even imagine that many small townships and roads in Almora also have hidden treasures of nature. In this series, I am visiting Almora's sights. In the last post you will see the Golu Devta and now in this post, we are going to the people. Kaisar Devi is towards the temple. As well as being of religious importance in this place, it is also known as a very big picnic spot for Almora residents. Here you will find all kinds of people. Someone will be absorbed in God's faith, so to see any natural scenes. These places are not less than paradise for couples, they can spend time with each other sitting in a quiet environment and due to their being away from the city, they are not at risk of being identified. Apart from this, a very important reason is the fame of this place. If you are going out on the way, then gradually you will find out the reason.

Located in the village Kasar on Almora Bageshwar Highway, this temple remains at a cave place on the small of Kashyap hill. Perhaps the idol of the goddess was already inside a cave, what is still inside the cave, but a temple has been built from outside. In this temple, Goddess is established in the form of Mother Kaushiky who destroyed the demons named Shrimha Nishumbha. The roads inside Almora city are quite narrow, hence there is a great deal of forest land here. There are different ways for the people to go from different places to Kaisar Devi. Those who come from the main market, they have to go to Dharanaula station to go here and there from there through the bus band, the bus or the stock can be reached by taxi. Those who are coming from Almora Ranikhet Road by their vehicles, they can reach Kasar Devi while walking through Lakshmeshwar and going directly to Narayana Tiwari Deval, Almora Binasar Road.

In today's October, Kaiser shared the experience of Goddess with you. In the morning, four people got ready to go to Kasar from a brother's car and according to the location of our house, the path of Lakshmana is right. Lakshmeshwar, moving out of the house, was moving on the edge of the torrent. The torch of the torso, is a big name, is not it? The more powerful it is, the more likely it is to be named. In the old times, when the city was not spread, it was difficult to identify the places. But now it was to be identified so that it was a mind-bog in this way that there was a slope in this place and there were trees on it, then the name of the torch of Dhar was kept. Now it is neither tree nor difficult to identify the place. If just stay, then this old name. By the way, the edge of the gorge is here, standing on the road, on the road. Going forward on this road, a peer mazar falls, after reaching it after reaching Narayan Tiwari Deval.

This place is the important point of Almora city because it connects the city with many attractive places like Chaiti Temple, Kaisar Devi and Binar are the major ones. Even if you have to go to Jageshwar then this point has to be crossed. From here the distance of Kasar Devi is only four kilometers and because of not having too much crowd on the road, we reached a gate of Kasar Devi in ​​just 10 minutes. However, the main gate of the temple was at some distance from here. But we decided to go by this gate. In this way there were quite a climb and fall between pine trees. Looking down from here and taking photos, we reached the entrance gate of Kaisar Devi, from where the climb began.