“Older than history, older than tradition, older even than legend and looks twice as old as all of them put together” - this is all about Varanasi as perceived by Mark Twain, America's the most famous literary icon.

Situated at the confluence of the rivers 'Varuna' and 'Assi' (Varuna flows into the Ganges on the north and the Assi joins the Ganges on the south); Varanasi, the most sacred city among Hindus, is also one of the oldest living cities of the world in all true sense. The history of Varanasi dates back to more than 1000BC; the city is older than Rome and it had already established as a prominent center for trade when Lord Buddha came to Sarnath, just ten kms away, to preach his first homily. Regarded as the city of Lord Shiva, from time immemorial Varanasi has been attracting hundreds and thousands of people every year to its ancient precincts with an eerie magnetism - be they pilgrims and devotees or sadhus and pundits, NRIs or nirvana seeking hippies, corporate honchos or normal tourists. The best way to soak up the cosmopolitan flavour is to take a boat ride or slouch around at the ghats or be the witness of the famous 'Ganga Aarti' during sunset.

'Ganga Aarti' at 'Dasaswamedha Ghat' is of the prominent features of Varanasi. As per Hindu Mythology, the creator of universe Lord Brahma himself created Dashashwamedha Ghat to welcome Lord Shiva and sacrificed ten horses in a Yagna, hence the name Dasaswamedha Ghat ( Dasha: Ten, Ashwa: Horses, Medha: Sacrifice). It is the best way to witness the diversity of people, religions, colours and cultures. Located near the famous 'Kashi Vishwanath Temple', the ghat turns into nothing short of a spectacle every sunset. Even though it is scheduled for sunset (6:00PM in winters and 7:00PM in summers), spectators start arriving very early (as early as 5:00PM) in order to get a good spot to view the ritual being performed.

During my two days short stay in Varanasi I have attended this event once. Since I already had been forewarned about the huge assembly who turned up to witness the Aarti, I reached the venue almost an hour early. I managed a decent seat at the cost of Rs. 50.00. To my surprise, I found hundreds of others with the same idea as mine had arrived before I did.

Thousands of people waiting on the boat to see the Aarti 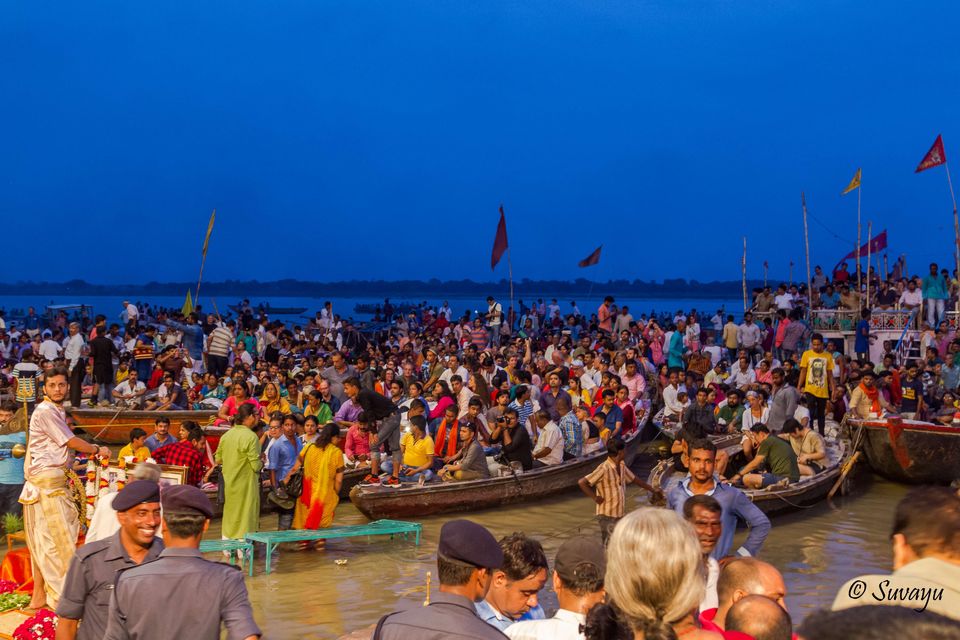 While there were people occupying every single inch of the steps of the Ghat, waiting for the Aarti to begin; there were an equal number waiting in numerous boats to view from the riverside. I found a huge crowd from diversified backgrounds, from different states of India, even foreigners who flew down all the way from different countries, from salwar-kameezs and sarees to jeans and Tees, from kurta-pajamas to wraparounds, from dhotis to suits - a cosmos of different religions, different castes, different colours. It was a conflux of faith and tradition and culture. In the midst all these chaos, on seven raised wooden platforms, seven saffron and cream clad priests were preparing for aarti with all the paraphernalia—an idol of the Goddess Ganga, conch shells, brass lamps with a snake hood, multi-tiered oil lamps, praying bells, handkerchiefs, peacock-feather fans, flowers and incense sticks.

Preparation going on before the Aarti 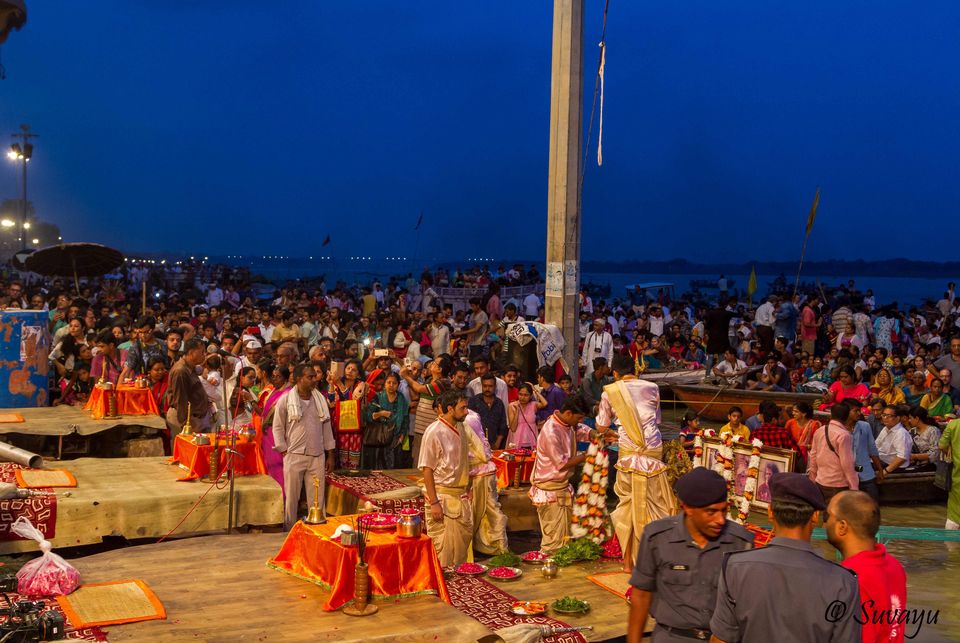 It was 7.00 PM sharp, an announcement made signalling the beginning of the Ganga Aarti and urging people to participate. The priests stood up, the prerecorded music came on, and the show began. Devotees started clapping together with the chanting of the mantras. Priests blew the conch shells very loudly and Aarti continued with the incense sticks. The Aarti started with the chanting of prayers in the praise of the holy river The Ganges - the most sacred river as perceived by Hindus.

Aarti started with chanting of mantras 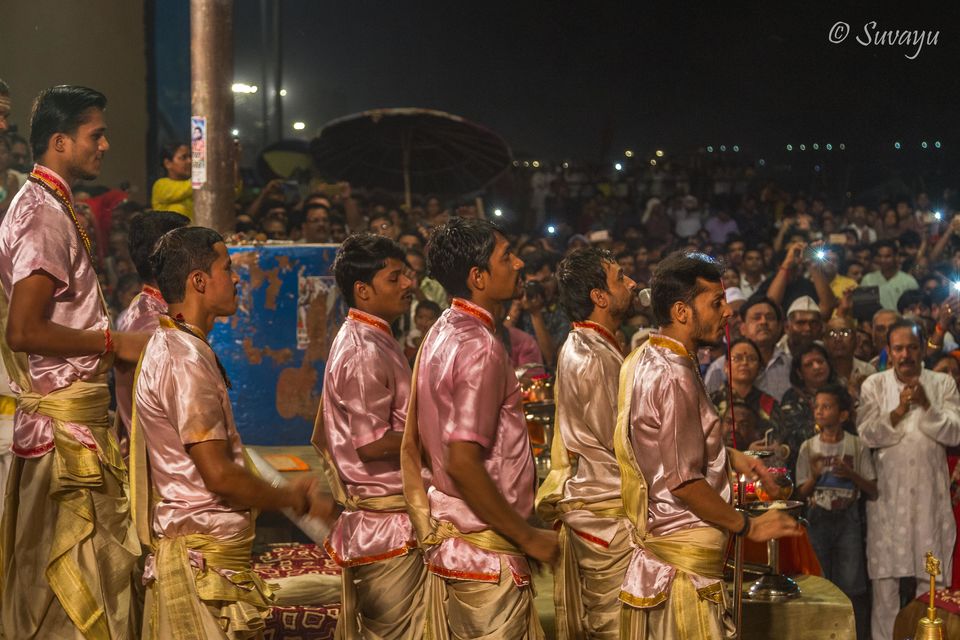 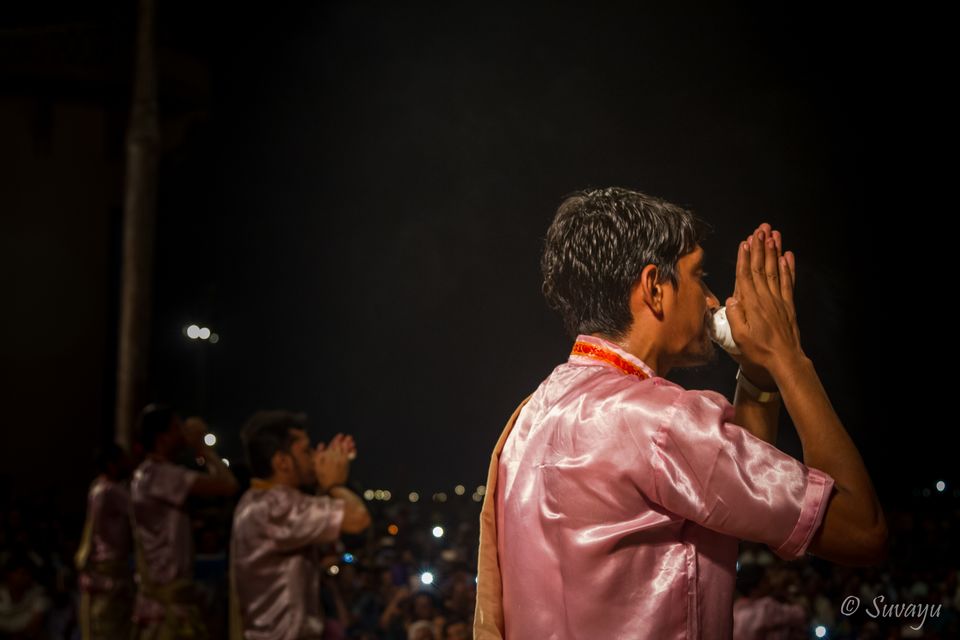 There are various stages in the Aarti. The first activity is worshiping with incense sticks followed by multi-tired lamps, brass lamps with snake hood and finally “Chamara Seva” in the form of peacock feather fan and a fan made of fine animal hair. The priests worshiped the gods and goddesses in all directions with well-practiced hand movements in each direction before coming to original position and faced the river. 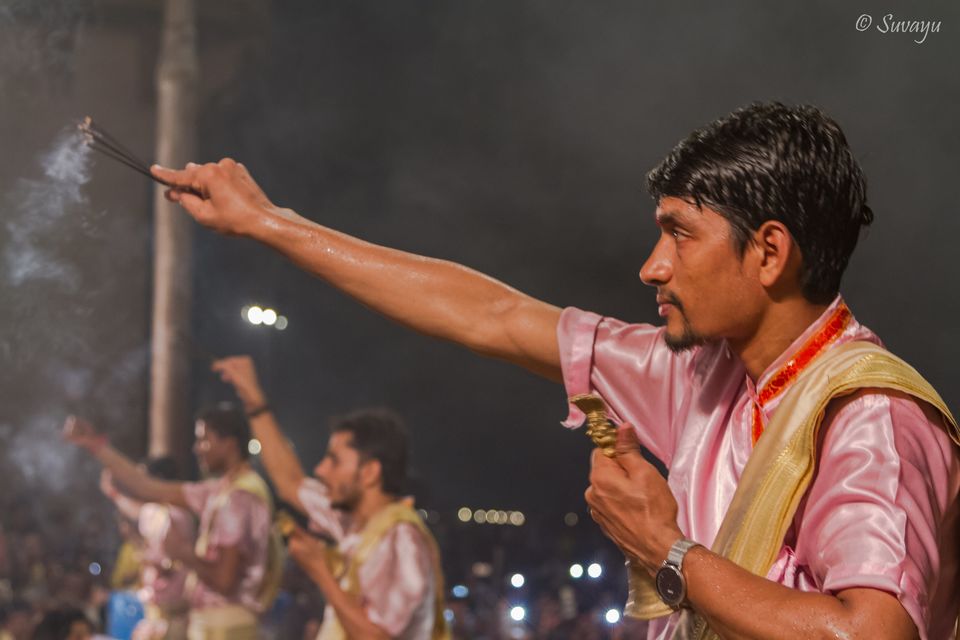 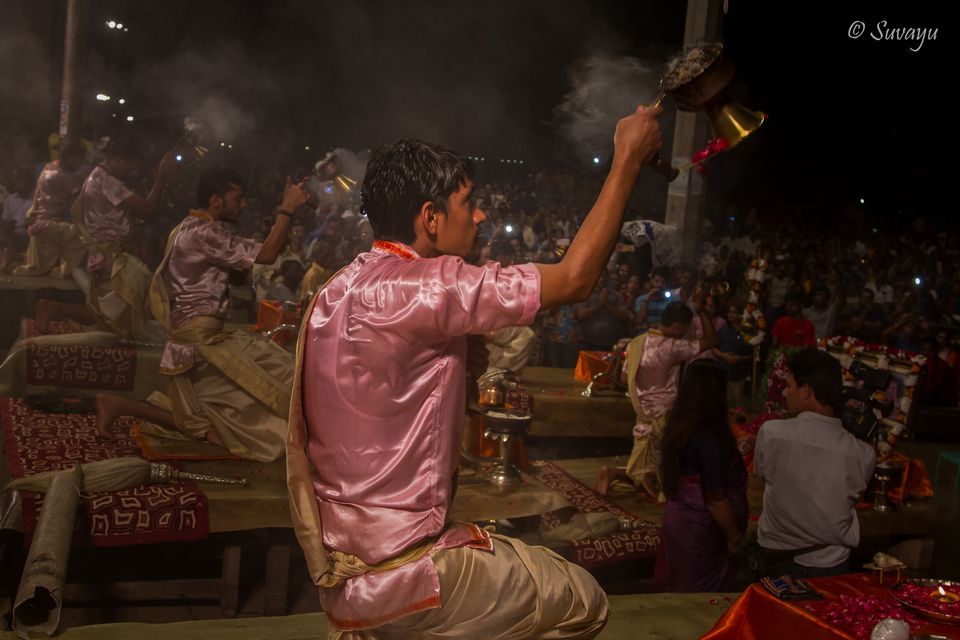 Aarti being done with multi-tired lamps 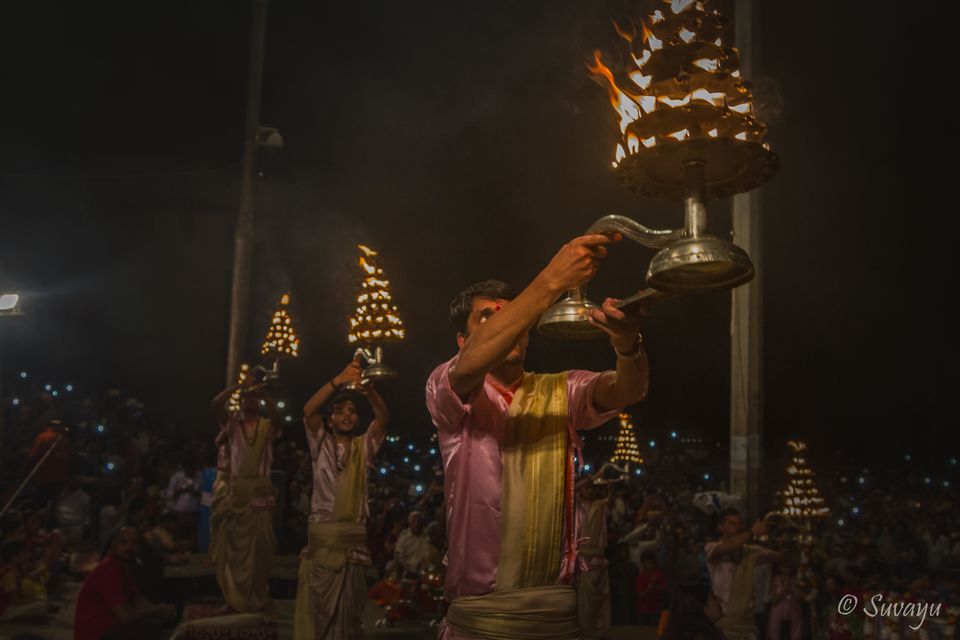 The synchronized movement is really praiseworthy 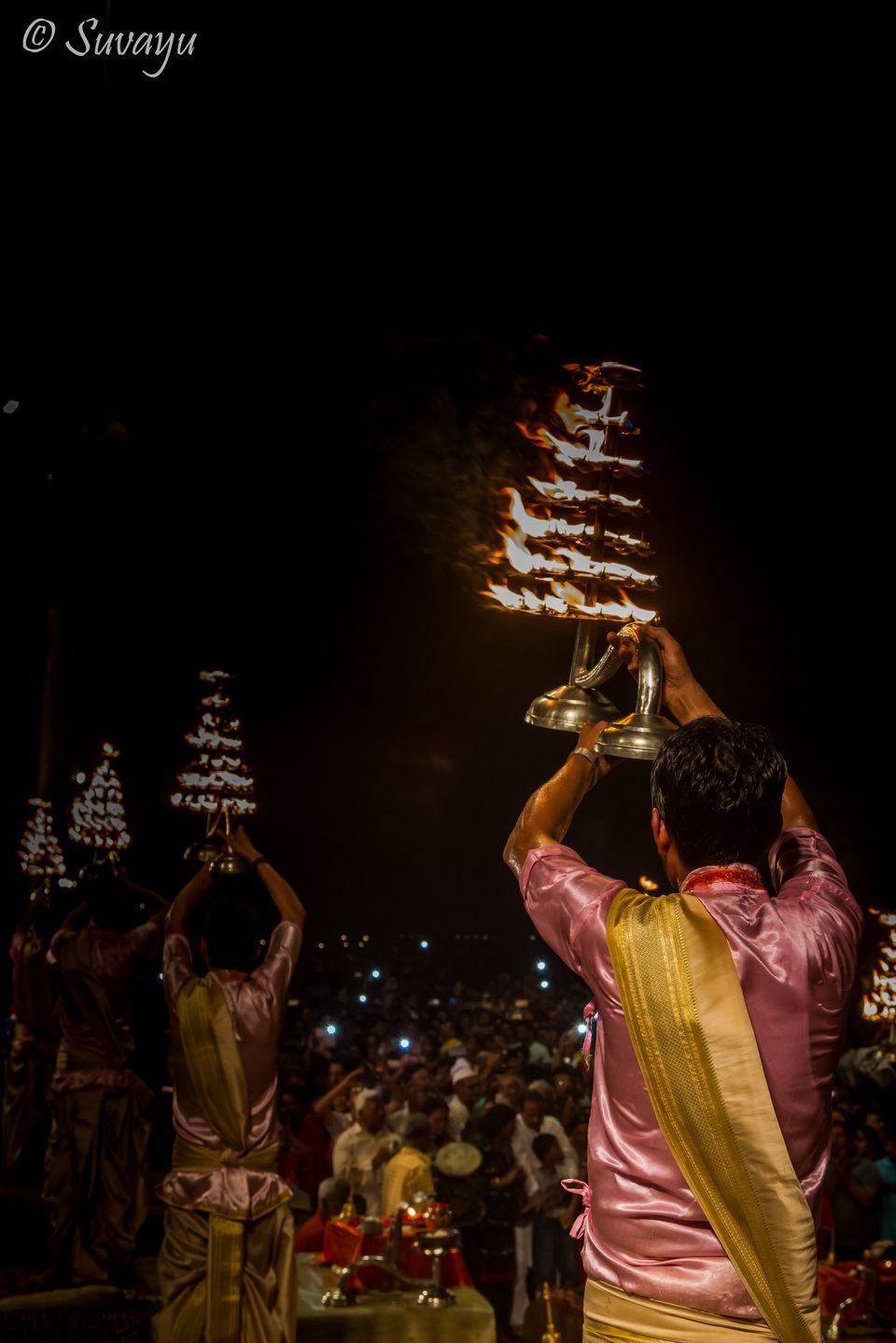 Aarti with brass lamps with a snake hood 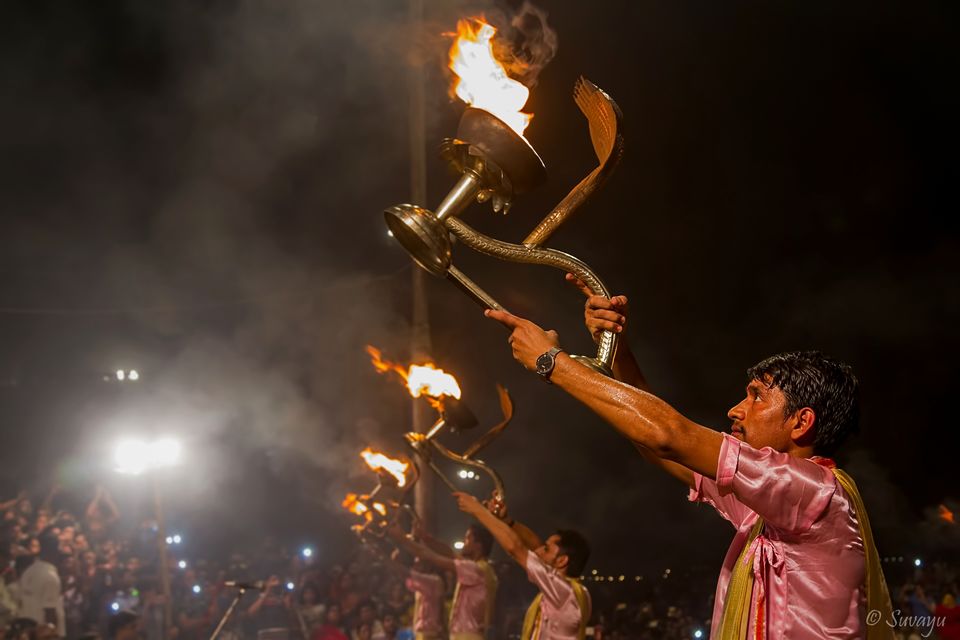 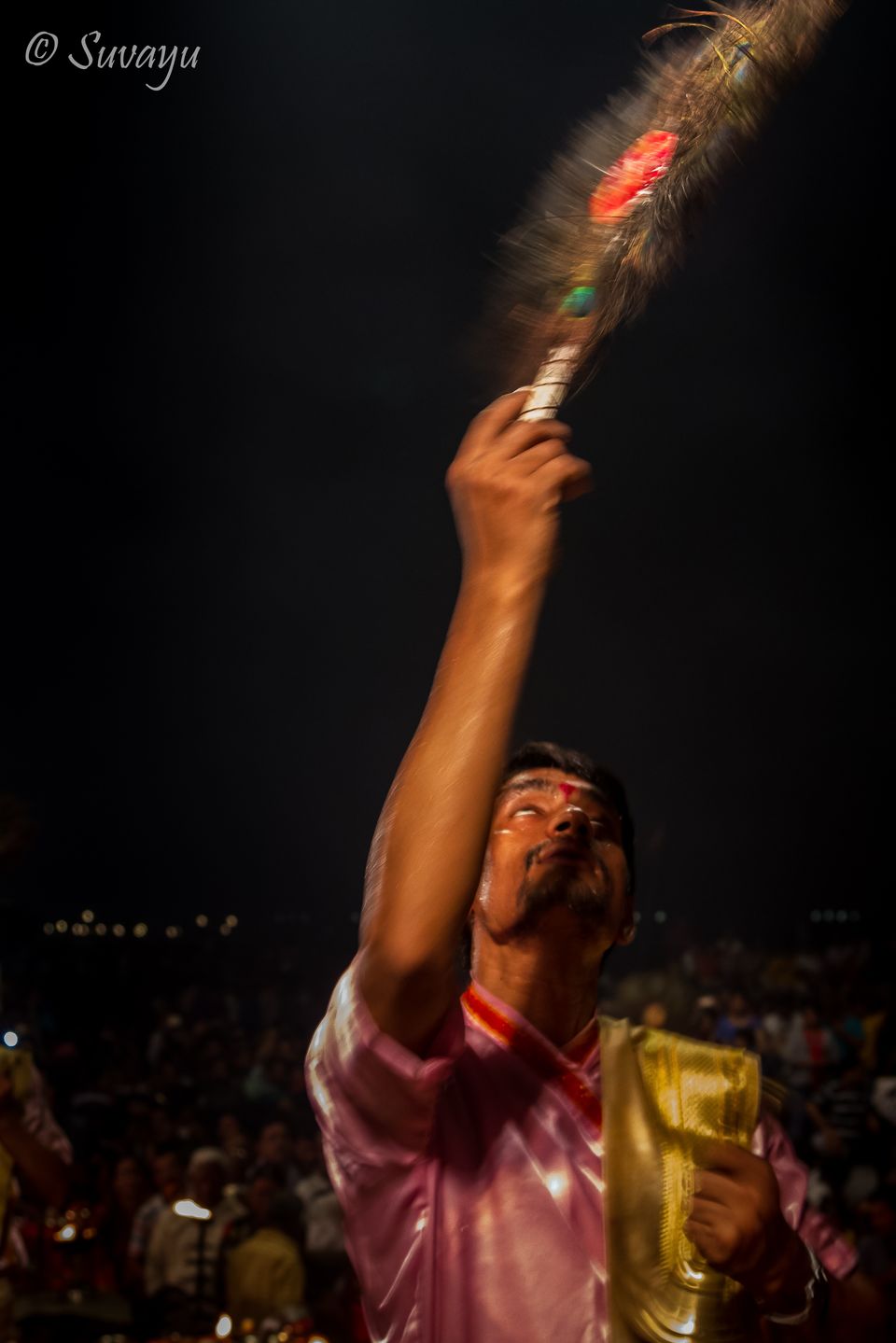 As the Aarti came to an end, the priests offered flowers, milk, and floating lamps to the Ganges. Pilgrims also followed the same and soon the whole of the river was filled with lit lamps and aromatic flowers.

I must say that the whole event is a photographer’s delight. The entire area is lit up with an beautiful golden glow. The light, the smoke, the fragrance of camphor and incense sticks, the collective hymns of thousands of pilgrims, the soul-stirring prayers engulfs your mind completely and take you to another dimension of time and space.