Italian Diary Part - 2 "Venice – The land of Bridges and Gondolas" 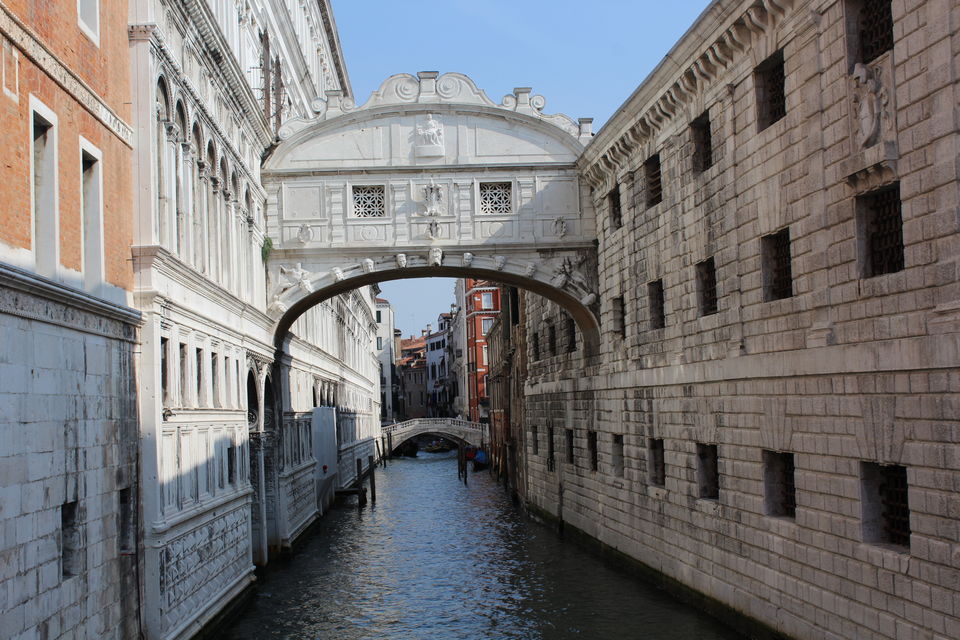 Venice the most beautiful city built on hundreds of small islands sits adjacent to the Adriatic sea, and is one of the many paradises on Earth for couples on their honeymoon. Venice is known much for its romantic atmosphere and the architectural buildings it has along with the famous Gondola ride and many more attractions for the travelers who visit the place.

We arrived by 5.30 p.m. to the Venezia Santa Lucia railway station located to the north east of Italy. Just arriving out of the railway station you get to see the Grand Canal, one of the main attractions of Venice. This was something very unique to me as Venice is totally different from other parts of the World as it completely depends on water transport for travelling around. Once after seeing the Grand canal we crossed the Ponte degli Scalzi, “bridge of the barefoot” to the other side of canal in search of our hotel for the night stay in Venice. After 30 minutes of walking through the streets of Venice, we reached Hotel Antico Panada which is situated very near to the St.Mark’s square and within 15 minutes I was out in the streets of Venice getting into the fascination of architecture around. I was spell bound by the beauty of St.Mark’s square also called as Piazzo San Marco in Italian. The main attractions of this square are St.Mark’s Basilica and the majestic clock tower and after crossing these you get a Piazette di San Marco with two columns which lead you into the lagoon.

After clicking pictures around the Piazza we then walked towards the famous Rialto bridge crossing many more small bridges on the way. The streets of Venice depicted a scene from an English play where people just keep on walking from point A to B quickly without any knowledge of visitors from all over the World. The next visit was to Rialto Bridge, which is at the narrowest part of the Canal and oldest bridge built across the Grand Canal. Gondoliers were busy searching for clients to take them on a ride in their Gondolas, but none of us were interested to take a ride and it’s also costly in this part of the World. Once after crossing Rialto bridge we were into the famous Rialto market with shops of jewelry, clothing and artistic glass. By then the time was 9.00 p.m. and we went to a local Chinese restaurant for dinner. That night after dinner, I got tucked away from my colleagues and went around the square and on the edge of the lagoon listening to the sound of the waves hitting the concrete end of the Piazette.

The next day was committed to visit the Murano glass factory located to the outskirts of the Venice city. After a quick complimentary breakfast in our hotel, we gathered at St.Mark’s square and headed towards the Doge’s Palace in search of water bus to take us to glass factory. Having a sight of the palace from outside we headed onto the other famous bridge is Venice called, Ponte della Paglia, which is also called as straw bridge and which gives you the spectacular view of bride of sighs. This bridge was too congested than any bridges in Venice as people gather there to take a photograph of Bridge of sighs. Bridge of sighs also called as Ponte dei Sospiri is a small picturesque bridge which connects the doge’s palace on to its left to the grim prison building located on its right. Some say that if you kiss your partner below the bridge while gliding in a Gondola, your love will last forever, and also saw many couples doing the same.

After few photographs of this bridge, we headed towards the ACTV Vaporetto water buses which is the only means to go to Murano glass factory on the other end of Venice. Still not sure whether I paid 20 euros for a day pass in Water bus, one after the other all of us made our way into the bus which took 40 minutes of ride to the Murano island. This ride was so spectacular that we could touch the sea water from the moving bus and could have a splendid view of the Adriatic Sea and the architectural buildings around Venice. Few privately owned speed boats were also seen cruising along with these buses. After reaching the island, a home to many glass factories we registered our names to a nearby glass factory for getting to see a free demonstration on glass blowing. This art is performed by the locals who are traditional glass blowers and it is a unique way they blow the glass and give it a shape. There will be a person who stands amidst of crowd and the glass blowers and he narrates the way they blow the glass and also about the history of Murano glass blowers. Once the show got finished they guided us to the storehouse in the other gate where they sell their unique glass products. After visiting many more glass shops in the island, some of us also purchased souvenirs for our beloved ones back in India.

Then we were back to Venice through another Vaporetto, as we had Frecciargento train booked from Venice to Rome that afternoon at 2.00 p.m. By this the very little, but most happening travel destinations I have ever been, the Venice came to an end giving new thinking about the next city I was to visit – Rome…..in Part 3…