Alleppey - The 'Venice of the East' 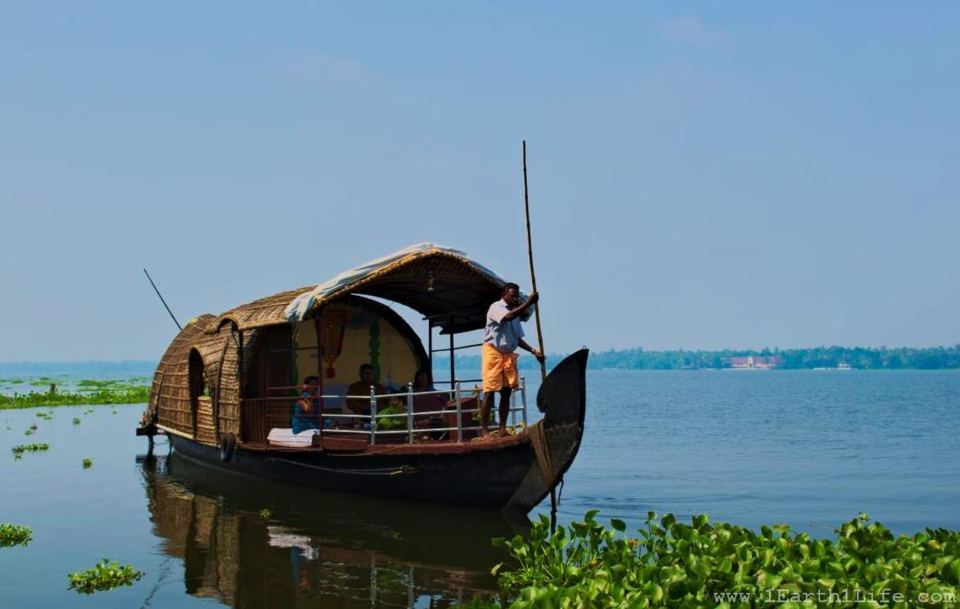 One of the best things about Namma Bengaluru is it's favorable geographical location, which makes it almost equidistant from the Western, Eastern and Southern end-points in South India. As a result, most of the tourist spots are within affordable reach from here whether via road or rail. One doesn't need to cough up much for a descent trip anywhere in South, if planned from Bengaluru. And this time it was to Alleppey - The 'Venice of the East' !

Alappuzha also known as Alleppey is an eye soothing destination in Kerala with a mix of both backwaters and beach. It is situated on the shores of The Arabian Sea close to the banks of Vembanad Lake. It maybe a cliche to call Alleppey as 'Venice of the East', but there is definitely a reason behind it. Those interconnected network of canals, lakes and inlets are estimated to be about 900 kms of maze-like waterways! 'Shikara', the country boat is used to traverse on these water inlets. Till date, many locals commute to the interior most parts of Kerala via boats on these waterways. This land is undoubtedly God's Own Country where nature has remained untouched and is duly respected. It has to be acknowledged that Alleppey is truly the boating capital of Kerala.

We, a group of nine friends began the journey at Whitefield, Bengaluru, from where we boarded our train on a Friday evening at 530 PM. Upon reaching Alleppey at 5 o'clock in the morning, we checked into a nearby lodge to freshen up. We had more than 4 hours to our leisure before check-in on our pre-booked 3 bed room double-decker house boat. With enough time at our disposal we headed to a nearby beach for an early morning stroll.

After having killed sometime at the beach, we then headed straight to 'The Finishing Point', a 15 minute auto ride from the Railway station. This is the place from where you start and end your houseboat ride as they are anchored here. The famous Nehru Trophy Boat Race takes place here on the second Saturday of every August.

The interiors look nothing less than a fully furnished 3-BHK flat. The only time you realize that you are in a boat is when you look out towards the vast open backwaters. On the lower deck, it had a plush seating area just behind the driver's seat, a kitchen and two bedrooms with one of them having an attached bathroom. The upper deck had an open area fitted with cushioned seats along its periphery and the center portion had a dining table. It also had a king sized room with an attached bathroom.

After having spent sometime exploring both the upper and lower sections of the house boat, it was time for departure. The 3-member crew loaded all the necessary ingredients and other essentials for the 24 hour ride. There are several hundred boats in the region and not all of them get a place to anchor at the docking station. Hence, they all pile up one behind the other and it gets challenging to get the inner ones out and put them on course. Ours was anchored onto the docking station and it took a while for the ones behind to make way for us to depart.

Fresh juice was served as a welcome drink. Soon the house boat set of on a voyage through the very scenic backwaters of Kerala. The lush green paddy fields, coconut plantations, human settlements, simple dwellings, eateries, shops, stores etc is what you get to witness on both sides of the banks. The green landscapes were eye pleasing and we really enjoyed the tranquil surroundings of the countryside. Various shrubs, seaweeds and other leafy plants growing alongside these water bodies provide an enchanting greenish hue and the coconut trees lined up gives it the finishing touch!

The only sound you hear is the gushing of water against the moving house boat and its mild motor roar. The cool breeze brushing your face as the boat passes along the green trees is very soothing. Time appears to have come to a standstill. No amount of repetition can dull the description of the swaying coconut trees, the lush green paddy fields, blue skies, cormorants, flock of ducks, fish-eating birds and those beautiful water lilies. You have to see it to believe it. The plant life near the backwaters is something that makes it truly breathtaking.

The boat was anchored for 90 minutes during lunch and fresh puffed rice, curry and fish fry was served in true Kerala style. After the sumptuous meal we got down the boat onto the nearby paddy fields to admire the beauty of the surroundings.

As you relax on the deck after a Kerala lunch, you may witness a sunset in vivid colors and enter the night with the vast power of your imagination.

The boat is anchored along the shore, the entire night. During the day, nature entertains you with its pristine beauty but at night you are back to worldly entertainment in the form of music, cards, stories and lots of laughter. Next morning, the house boat set of on its return journey at 7 AM to 'The Finishing Point' and by 9 AM we were out of it. The voyage had come to an end.

Alleppey and its backwaters are true gifts of Mother nature and is unique in its own way. The landscapes and the scenery all along the house boat ride are mostly country-side and free from any city based chaos, traffic and pollution. If you want to witness nature at its pristine best, then head over to Kerala Backwaters. Now!