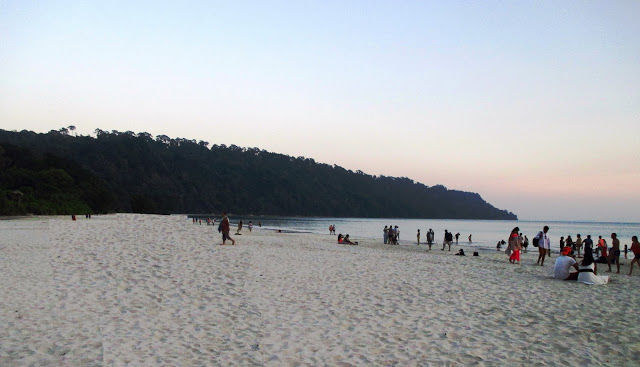 After reaching the hotel with black stone, it must have been around half an hour that our little partner who slept in the road got up. Now, thinking about rest was like watching the Diva Swapan. Within fifteen minutes, Began to be ready for We were also getting bored in the room, so our resort, which was located in Vijayanagara, is visible in the backyard, which is visible in the middle of a while. The hotel was also very well built, rooms were built on both sides And the middle pathway towards them Together with tree plantations and flowers, although the number of coconut trees was in abundance.

After moving out of the room and moving towards the middle, to sit down to show a hut about, they sat down for a while. Then there were many blue hamak bands tied with two coconut trees. Because it was so far only to see the white hamaks, let's try cutting the color for a while and even try to inspect it. After many attempts, the final balance was gone.After that we reached the beach while walking. By the way, the beach did not look too attractive, but a great arrangement has been made to sit here. It is good to see the sea waves of sitting here. Was there. There is no crowd in between this can say private beach.

After this we went to the room of two other fellow travelers who were still resting. We went to the tea and the little partner had breakfast. So far, the time to leave for Radhanagar was just three o'clock, so we got ready to walk and keep our essential luggage in the bag. Our car owner Niranjan ji had come from time also. Radhanagar beach was at a distance of thirteen kilometers from our hotel and the road was not as good as it was on the inside edge of the city. After reaching there, the first sight was seen here, on the side of the giant beach spread across the half-way. Due to this magnitude, only Radhanagar beach is considered to be one of Asia's highest beaches. Perhaps because of seeing the black stone beach and being famous in the world of Radhanagar, this sea end, our expectations had increased greatly; The sandy edge which seemed to spread far enough, the green mangrove tree associated with the green forest and the sand which it looked like it was Looking at the grandeur of the sea, assuming it as the sky, moving towards the sea. Yes, leaving these trees grow in height, parallel to the land goes as much as they want to get in the sea. But the water that is known for the Nilima of the Andaman is not known. It is also possible that due to the time of the evening this happened, no such place becomes so famous. However, there is no seashore ahead of its magnificent magnitude, but even after being very small in size Due to its attractive colors, black stone is also not less than any other.

Here the marine waves rise very high, so there is a great place to swim with the waves. But due to the time of the evening and the rising velocity of sea waves, many security guards were also walking around. Due to being filled with the crowd, people of all sorts were seen here. There were some who were not able to give up the temptation to come out of the water, some were dreaming of a happy future while sitting with their new-found life partner, making the house of sand. Some trees were sitting in the camp and watching the waves coming and going. There were many who were playing football with children and some were enjoying badminton. People from all walks of life appeared here who were entertaining themselves according to their age. Even the mind of our elderly companions, as per their age, seeing the Shiva Mandir board on Yanha, they were bent on going there, so we also have them. Until it came back after seeing it, it was time for sunset. But here perhaps Sun God was indebted to us and went behind hiding behind the clouds, they denied us from the philosophy of our red orange colors. At sunset, it started to be light, dark and dark until it got out from the middle. The idea of ​​calling Niranjan ji out of the phone was discovered out of both the Vodafone, BSNL network. There was no means of contact now. Here, even if you wanted to search back and forth, there was no explanation. Almost all the people went on doing so. In one of the shops said that you sit outside my shop, Andaman is a very safe place, here no one's hair is also dummy. Calling the same gentleman's phone from the mobile phone, he found out that he did not have a phone, and after talking to two more shoppers, he called someone from the mobile and called Niranjan ji and we were happy to be happy. Arrived at the hotel Now the big question was what would happen to food, because one of us was vegetarian and on the one hand it was necessary for a man to eat bread, then once again from the Nalaj Kingdom we sent the food to Niranjan ji. Afterwards, it was discovered that hotels would also make bread when ordering. Let's not eat any food means to get it from anywhere.