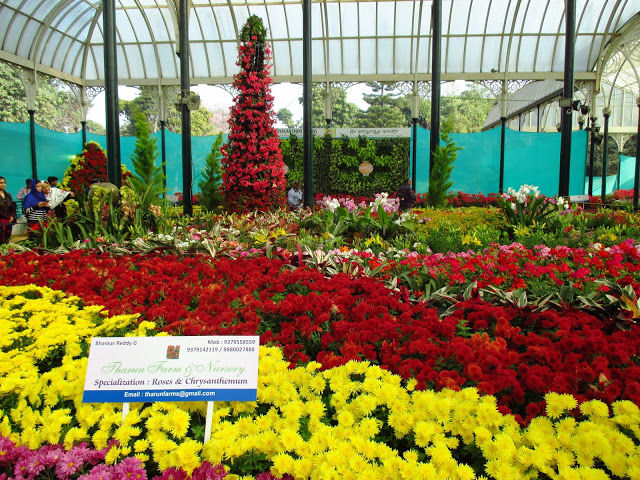 For the last few years, you have already seen glimpses of flower show in Lal Bagh. Through this post, you will be taken to the Republic Day 2016 on the occasion of the ten-day flower show. There is a saying that man gets education only from his mistakes, so how can we remain untouched by this, it also happened to us. It is a matter of time, that the Floral House boat was probably made that year, on such a holiday, it is thought that come and go, and only one afternoon of the afternoon till the exit from the house and reach the destination. At first, only the head count became very cloudy on the ticket counter, after that the men were in the fair. Wherever the crowds look around, well now when they were away from home, then somehow they came back after seeing it in Bhagmand. So, nowadays, we think, on Monday morning in the morning, there will be a comfortable bird watching along with the philosophy of the Lal Bagh Flower Show. We took the route from our home at eight o'clock and on the nine nights, we were inside the Lal Bagh. At this time a lot of people were here and the glass house had not even had the time to open, because it opens from 9 am to 5 pm, so now the thought of seeing the other part of the garden, the weather is still light If the cold was happening, then there was also joy in walking. Looking at the light of the light flowers on the way, we arrived at Lal Bagh, the first lake to reach the lake. We welcome Kamal's flowers here.

Flame of lotus flowers in the lake

After seeing the amazing shade of lotus flowers, the resonance of the bird's tune was attracting attention to himself. After taking one of two photos, we once again came to the Glass House. Tickets had started getting so far, which has been priced from this year to fifty rupees per person. As far as the glass house was being seen, the flowers were flowering, red, orange, green, blue, yellow, white. Yes, seven colors of the rainbow have come in these different forms in their different form. Every cow had its own charm, everywhere a combination of different types of flowers was waiting everywhere. This year's main attraction was a house made of flowers, with flowers of different colors layered around it. In the mind of every viewer, it may have come to such a thing that wishing to spend so much time in the house at least one day in the right place. Now, when the house is so beautiful, the reception will also be done in a special way, say that there were large entrances in the shape of the heart on the other side of the house. One who had a flower bed was also made. Now the kids did not get disappointed by coming here because there was a Barbie doll made from flowers of their favorite violet color. There was also a difference from the last time in this red gardens that battery powered scooters were also available to roam there. Now we did not need it or if we did not even ask for the rate. Take a look at the beautiful scenes here-