Ride to Gudibande, Lepakshi from Bengaluru 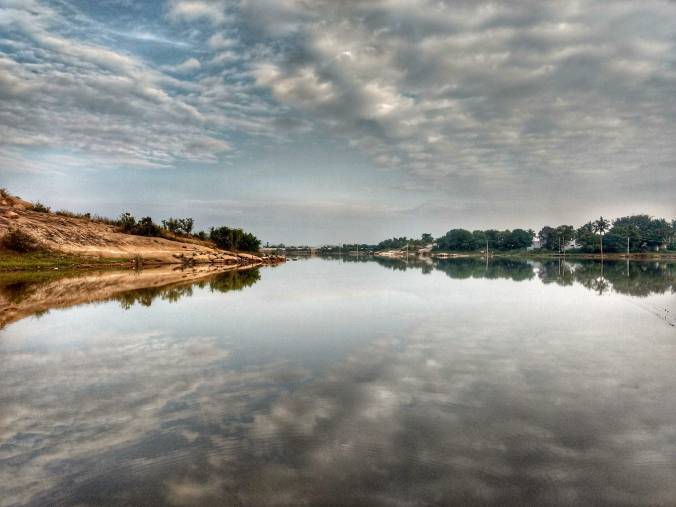 Hope you guys are having a great weekend. So it's another Saturday and am back with another travelogue about a ride I went on today.

This is about a ride to a Historic Fort town called Gudibande, which is around 100 KM towards the North of Bangalore. The fort apparently was built in the 17th century by a Chieftain Byre Gowda. Though I couldn't find out the exact purpose for which it was built, but it is said that the temple on the fort top is home to One of the 108 Jyotirlingas. Now that the introduction is over, let's jump into the travelogue.

So, one thing unique about this trip was that I was planning this trip on an app called EasyRoads. A friend of mine suggested me to use it and since I am a frequent traveler, she said I can also share my itineraries including any offtrack places I explore (which I usually do ???? )

So, I just put the start and end destinations and added a task to remind me to refuel my bike and went off to work on Friday. There was also an option of adding restaurants but I didn't since I usually prefer local food and a myriad of other points of interests you can add on the fly. Came back home in the evening and got hooked to this new Amazon Prime series called Mirzapur.

Thankfully, because of the task I tanked up my machine and slept off.

Come Saturday, I hit the road by 5:20 AM. The drive on Bannerghatta road was horrible in the morning because the potholes were filled up with water from the rain overnight. What a start, I told myself and continued pulling the throttle. It was way early for this part of the city to wake up, so I crossed Hebbala by 6 AM without breaking a sweat.

Sun wasn't out yet, but the myriad of shades of blue that filled the sky which changed every minute of me driving on the highway that chased away the sleepiness that was leftover. It was like the nature holding my head, looking straight into my eyes and saying, Bro you woke up so early for something, witness it while it's happening. Enjoy them shades turning brighter from the darkness. And so I looked, 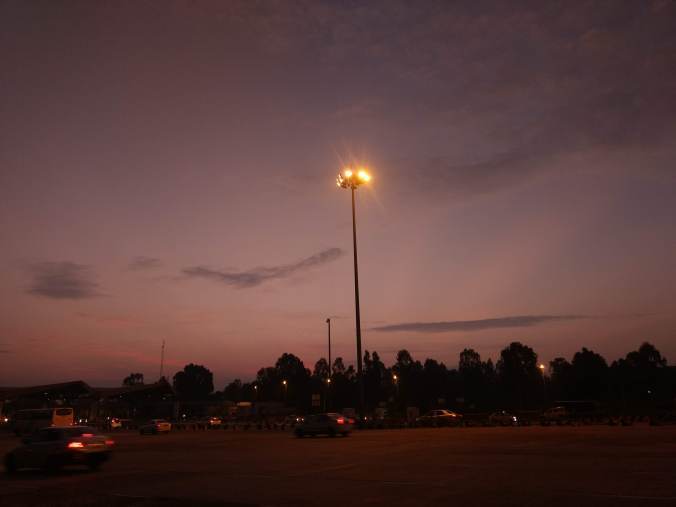 The oranges and the blues 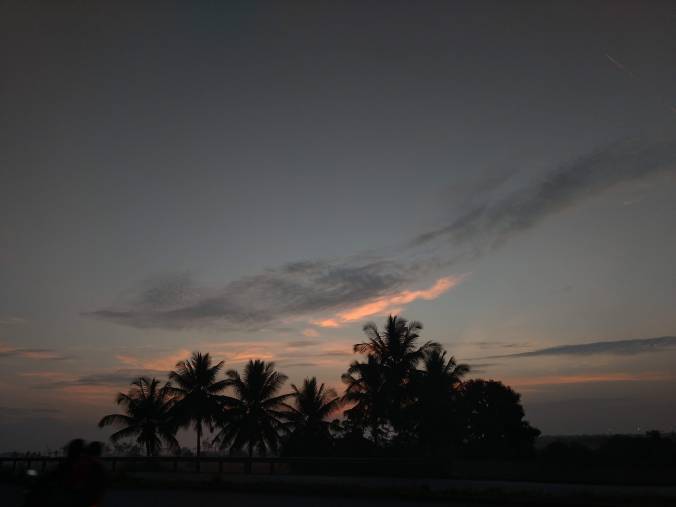 The bright reds, yellows and oranges 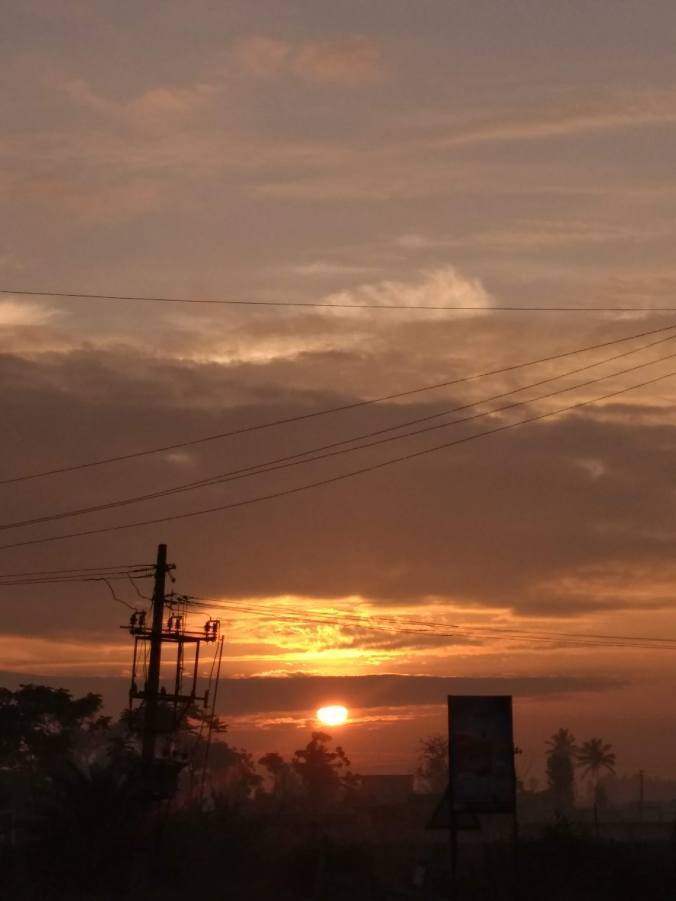 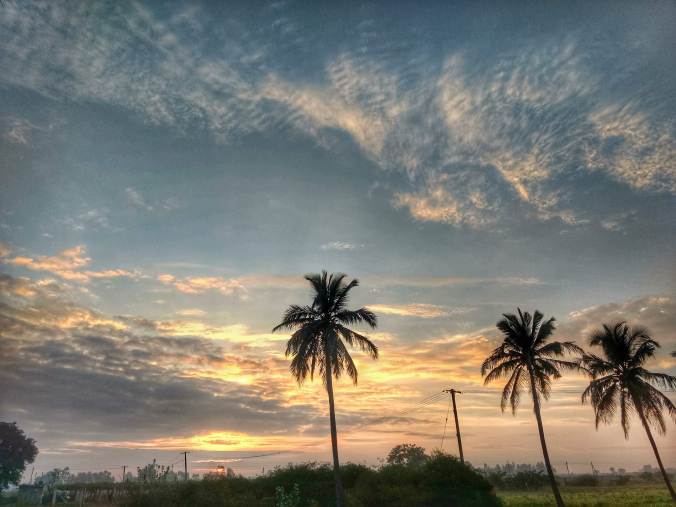 The drive was pretty straightforward n the highway so, occasional views like these kept me going on and on, all the while holding the speedo@80KMPH.

Views helping me keep the boredom away! 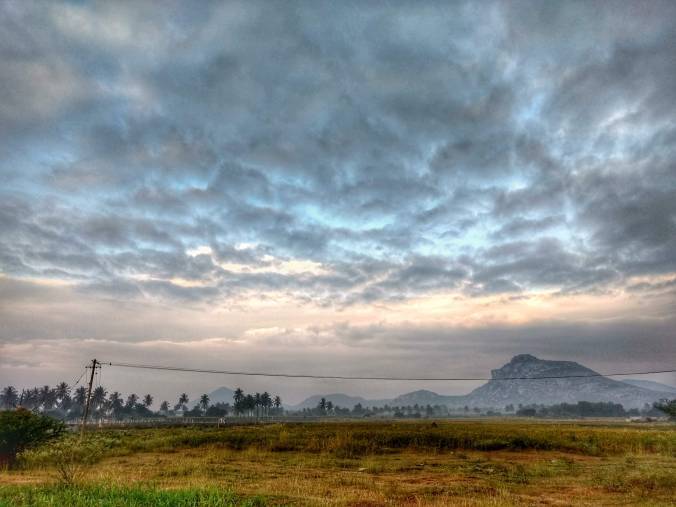 The Maps suggested me to go via Beechaganahalli route to reach Gudibande but soon after I reached Nandanaganahalli, I saw a board that said GudiBande-18 KM pointing towards a narrow road, that appeared to be running alongside a hill.

Knowing myself, I choose to take this path, departing away from the well-laid highway and spotted this view. 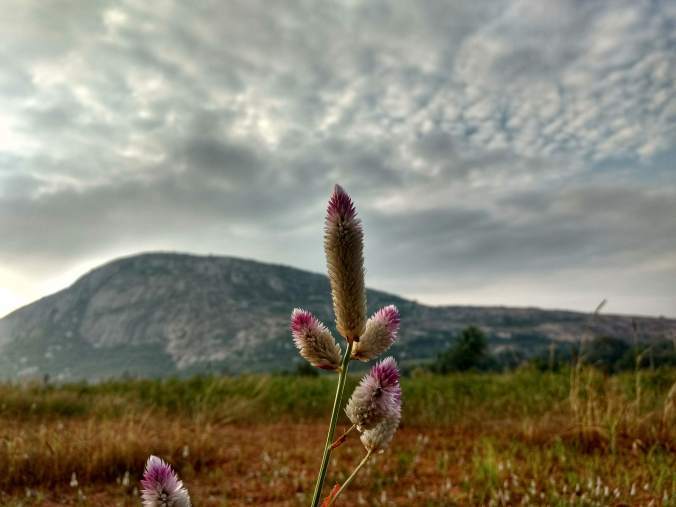 The road further ran through smaller villages and soon the pristine blue waters of Byrasagara welcomed me. Usually, people stop on the road and embrace the beauty of the lake, But I decided to get closer to the lake. So soon after crossing Myakalahalli, there were few farms (can't clearly remember which ones as I didn't pay much attention) and there was a muddy road running between the farms and a huge rock. I presumed this would end up at one of the shores of Byrasagara and it did.

This spot, was away from the road, so I was away from the noises of the vehicles passing by. There were quite a few birds as well, fewer of which I could identify as Black Winged stilts, swifts and a Pond Heron. But the most beautiful thing isn't about the isolation from noise nor the birds, it's symmetry.

I guess the light was perfect, the lake became the mirror reflecting everything in the vicinity creating a perfectly symmetrical view. I was simply awed by just looking at it. As you can see below, even the clouds can be seen very distinctly. Wonders of Nature I say. One can also see the Gudibande fort in the background. 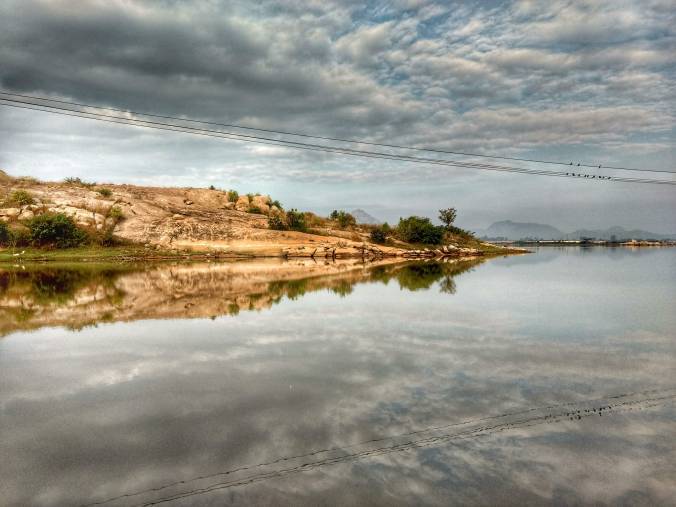 After spending some time at the lake, I was off to Gudibande village. I also witnessed the vastness of Byrasagara that appeared to be endless. So it is in circulation among the natives that usually in monsoons, the water from Byrasagara overflows on the road to the other side.

Supposedly the place where water flows over the bridge 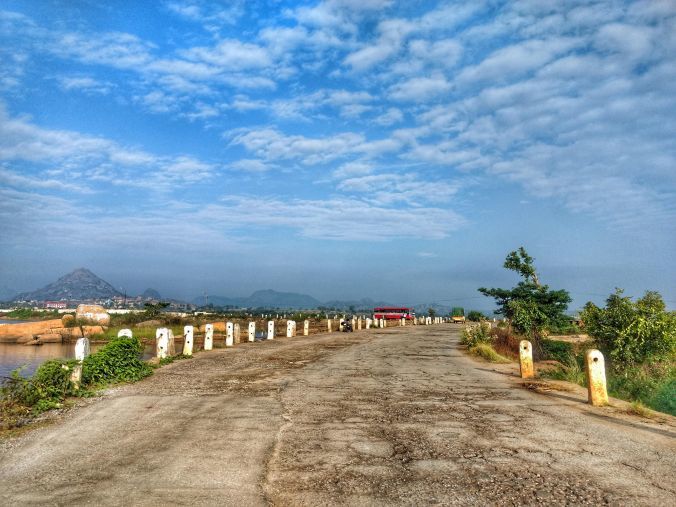 Gudibande village was about 1 KM from Byrasagara. Once in Byrasagara, I had a tasty breakfast at a small joint.

I was riding back and forth on the main road clueless as to where the entrance to the fort was. I randomly took a turn and there were kids who were playing Kabaddi at the foot (not the entrance) of Gudibande Fort. I asked them about the directions and they asked me to take a left turn near a movie poster. 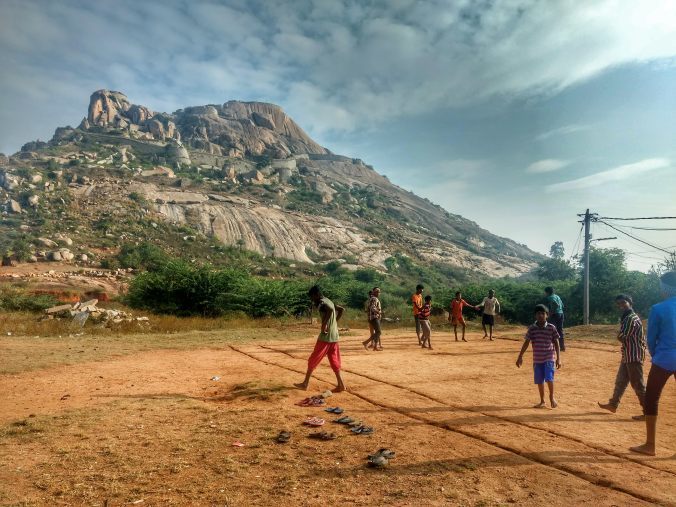 I am not sure how timeless this signage is, Hence would recommend asking a local about the exact turn to take to reach the footsteps.

There were well-laid steps right till the top. I expected a decent crowd since the temple on top supposedly has Jyotirlinga but nope, not 100, not 10, not one. There was literally no one on the fort.

The climb was moderately difficult and lonely. Add tight spaces and heavy wind that created a wide spectrum of noise to that and it just became spooky and scary. I continued the climb to see what was in store for me. Soon two little puppies joined me on the climb, probably expecting me to feed them.

After about 20-25 minutes climb, I reached the temple standing tall on the top of the fort. The fort supposedly has 9 levels with interconnected secret escape routes and a rock pond on every level, but I could spot only one escape route and one rock pond respectively. 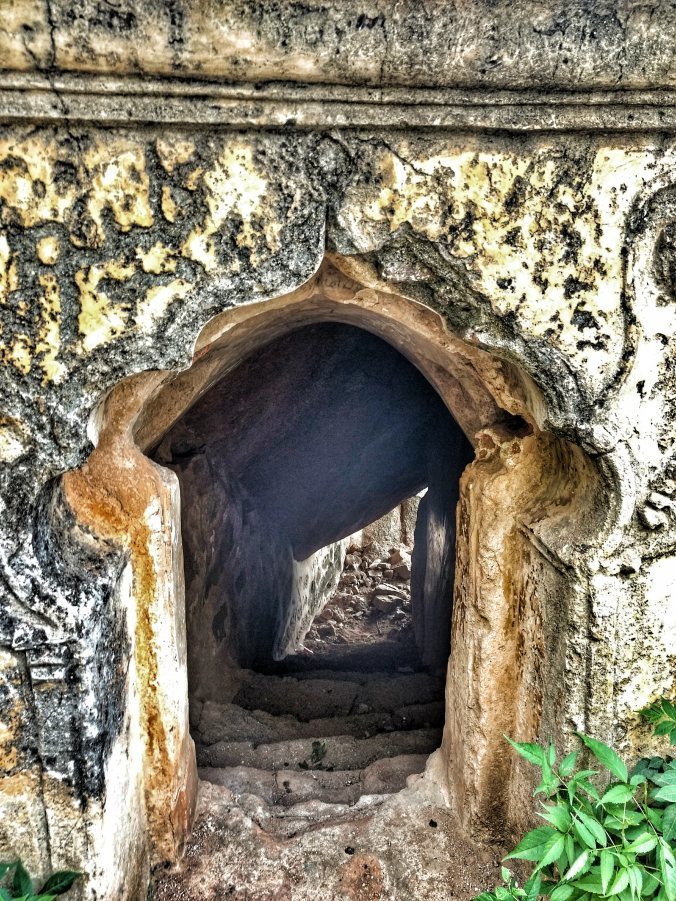 The temple was locked and even the Sanctum Sanctorum (Garbhagudi) was also locked up. Possibly this was the reason for not seeing anyone on the fort. It may have been possible that the jyotirlinga presumed to be here on the fort is installed somewhere else. 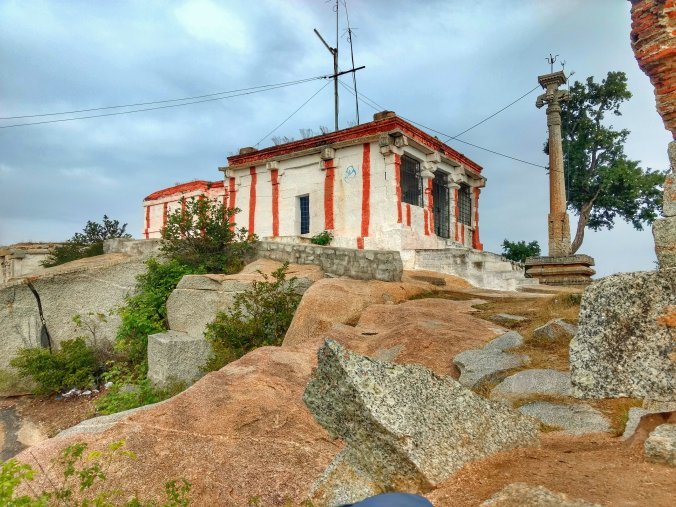 Anyway, I walked up to the periphery of the fort and it had an amazing birds-eye view of the village and Byrasagara.

View from the top! 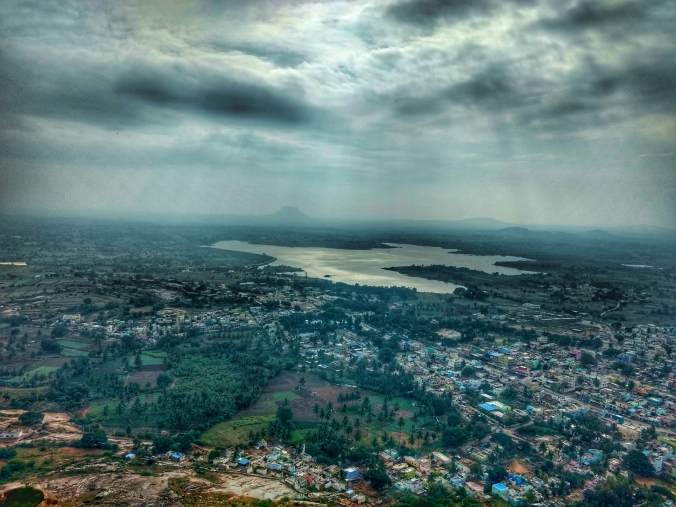 The wind was too heavy on the top, wiping off the tiredness of the climb. With the whole world seemingly under my feet and with no one else on the fort, I felt as if I was the king of the fort for that moment ???? 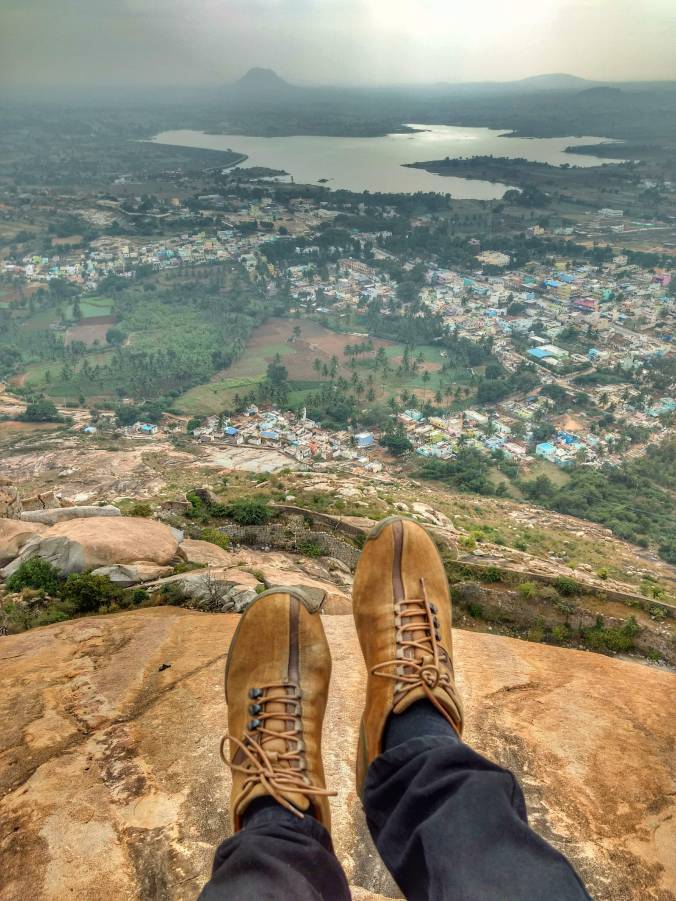 I fed the buddies as my gratitude for accompanying me in the spooky climb.

Man with Man's best friends on top of the world! 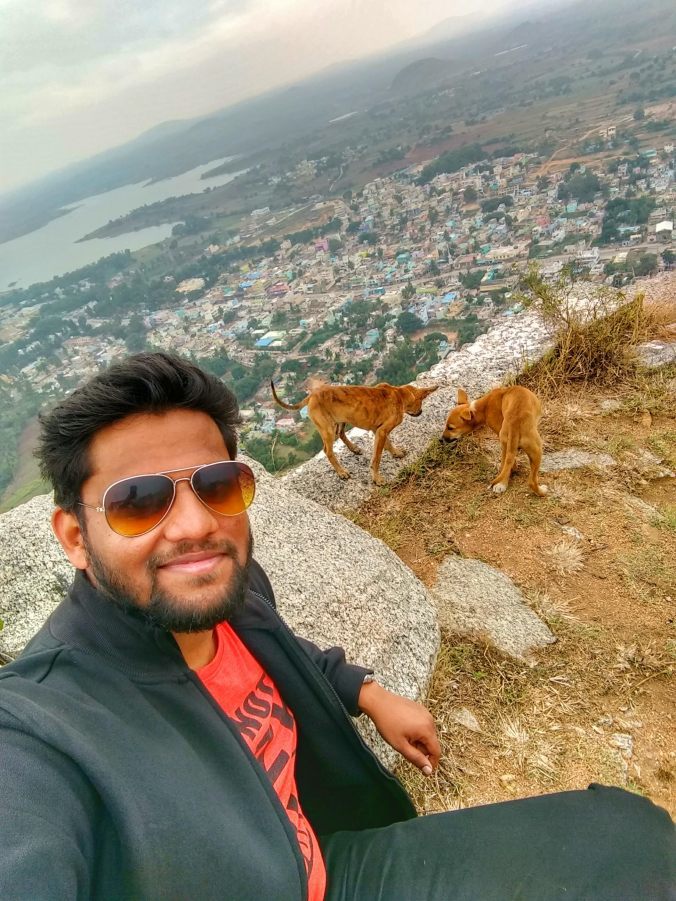 It was only 9:50 AM by the time I climbed down and I had around 100 Kms to cover, averaging 80 KMPH for 80 Km of that stretch will make me reach home by lunch. But I didn't want to, so I pulled up the Easy Roads app since it appeared to have a good collection of POIs and searched for all POIs around, it showed Lepakshi in close proximity and I was surprised I didn't know that Lepakshi was this close. Without further delay, I added that to the itinerary and started the trip. The best thing is the app is integrated with Google maps, so starting a trip will take you back to the google maps.

The maps showed two options, one that was running through hills and another the highway that I rode so far.

For Obvious reasons, I took the one that ran through hills. After a few Kms ride, another lake presented itself. But this time with a huge hill in the background. The view was really pretty and I stopped there for some more time before I picked up the pace to reach Lepakshi.

There's something with me, random roads and beautiful views 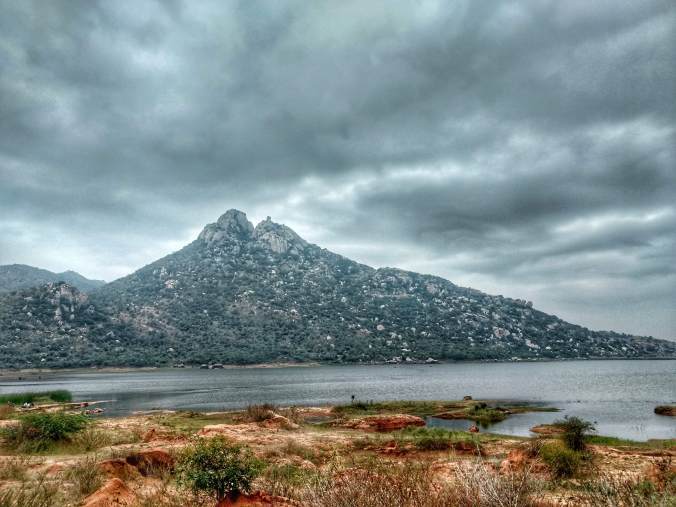 The road was really good until it became worse. It was worser than Bangalore roads, wasn't expecting it to be really good either but I was averaging 20 KMPH on this stretch on one hand and on the other, the uneven surface increased the fatigue on my hands and I don't know what all damage it caused to my age old machine.

Thankfully, we reached Lepakshi in one piece. I had not researched about Lepakshi, so I just asked around about the places to see.

Veerabhadra Swamy temple, Pakshi and the Nandi appeared to be the prominent points of interest.

The stone carvings reminded me of Hampi. The carvings were similar to what I noticed in Hampi. Why wouldn't they be, after all both the places were once part of the glorious Vijayanagara Empire.

Stone Carvings similar to that of Hampi! 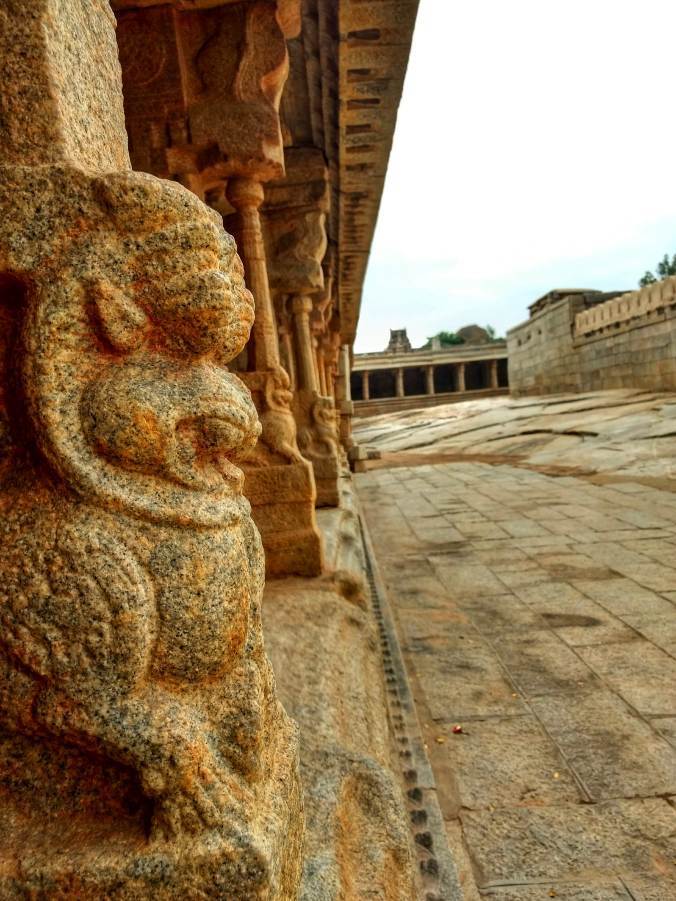 I had no clue what all the temple was home to, so I was just taking a wild guess while looking at the stone arrangements.

Out of all the arrangements, this one appeared to be a place to perform rituals. The carvings on the pillars appeared to be of various gods and goddesses.

Probably a place to perform rituals! 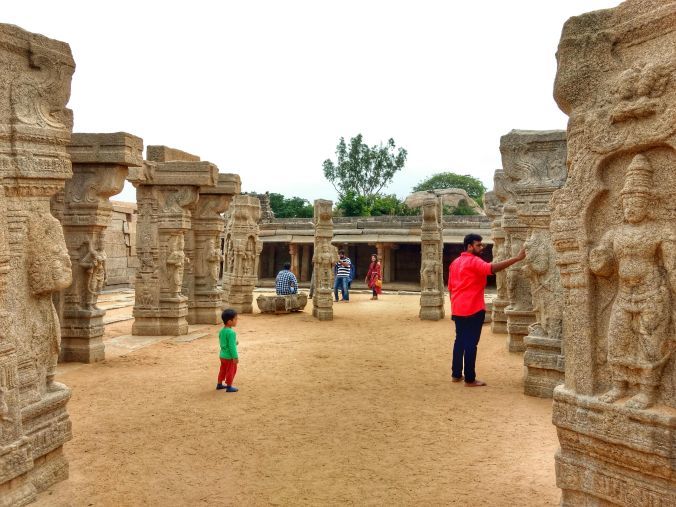 I then left for Pakshi. Pakshi is said to be the point where Jatayu fell down after being shot by Ravana in the Indian mythological epic, Ramayana. Apparently, Rama commanded Jatayu the Eagle to get up, uttering, Le Pakshi ( Le is get up in Telugu and Pakshi is the bird) hence the name, Lepakshi.

There's a Jatayu theme park where a huge statue of Eagle is installed on top of rocks. Roughly takes 20 Mins to climb up and down. The top was too crowded so I didn't want to spend any time. 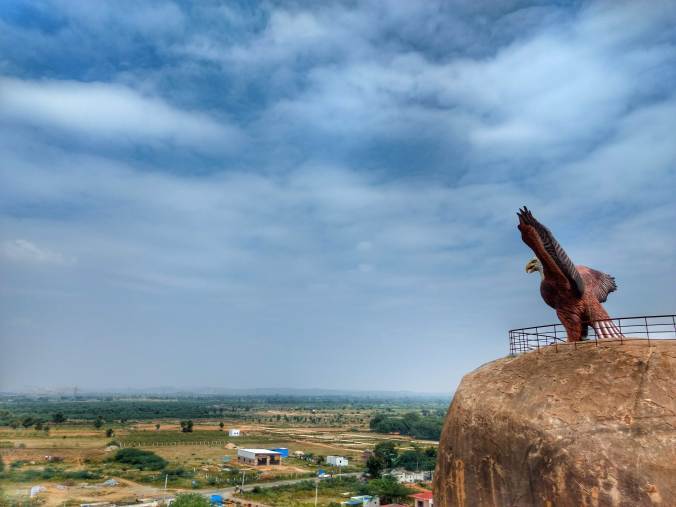 Next up was Shiva's Nandi. Which is about 50 Mtrs away from Pakshi.

The Nandi is said to be the second largest monolithic Nandi in India. First, one being in Mahanandiswara Temple in Kurnool District. 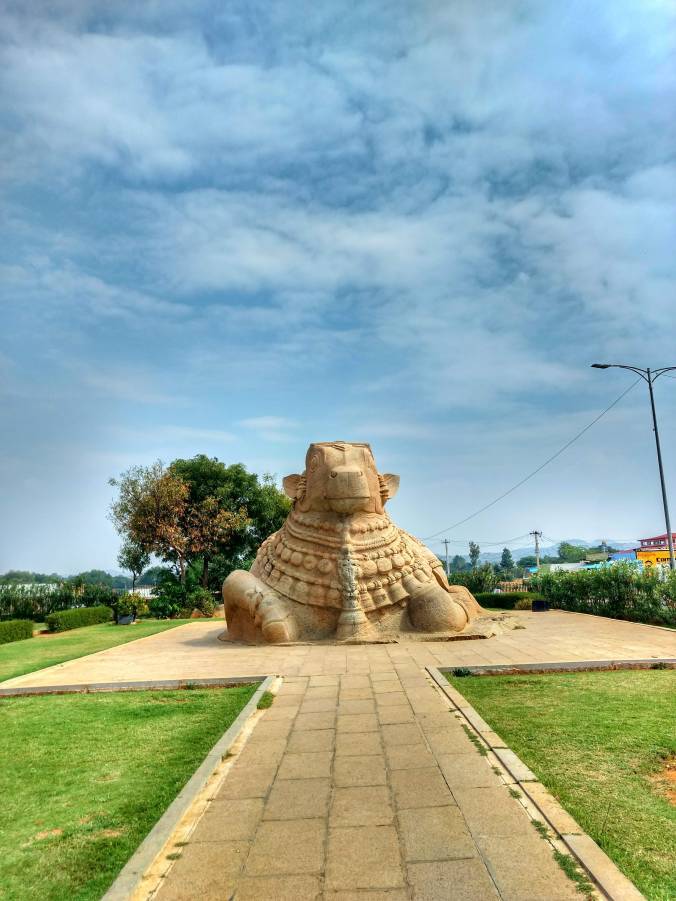 After witnessing the architectural wonders, I rode back to Bangalore.

The ride again was at a constant speed of 80 KMPH. I had roughly 126 KM to cover, the first 100 KMs took about 1 Hr 10 Minutes. However, the last 26 km stretch took 1 Hr 30 Minutes. All thanks to the glorious traffic of Bangaluru.

With a deep sigh I navigated through the traffic and reached home.

So here I am back in the concrete jungle, waiting for the next avenue to get out of it and come back stronger than ever.

Until then, these memories will keep me going.

I'll be back soon with another weekend travelogue.

Thanks for the read.

This travelogue was originally published on: The Dump Yard

For more quick travel updates: Here's the link to my Instagram profile