A City With A View: Budapest, Hungary

By Kevin and Ruth

We arrived at Budapest's Keleti Train Station at around 3:30pm, almost an hour late. We had arranged to meet our contact from Budapest Tourism at 4:00pm so we had to rush out of the busy station and into a city that we had never been to and try and make our way to our hotel.   We were lucky that we went into a private "info" place in the train station and just when they weren't that busy. They gave us a small map of the central core and pointed us in the right direction. I was only in there for a couple of minutes and by the time we left the place was packed!   So it's somewhere around 31C (88F) and we do the 2.8 km (1.7 mile) walk in about 25 minutes so we're all hot and sweaty when we get there.Check in was great! Gergo, from Budapest Tourism was there waiting for us, and Tunde, the receptionist offered us a cold drink while she took our passport information. We went up to our room and freshened up a bit before heading back down to speak with Gergo. And then we went and wandered around the central area at night. We are lucky to be staying in the downtown area because we don't often go out at night and I can see us wandering around in the evenings with no problem at all.Lots of people out and about on a beautiful summer evening. The patios and outdoor restaurants were busy and the people were just out enjoying the evening. We enjoyed it too...it's fun just sitting and people watching for a while. Budapest is a fairly large city, in fact the seventh largest in Europe with a population of 1.7 million people. The city is separated by the Danube River which runs from North to South through the city. On the west side of the river is the area known as Buda, and on the east side of the river is the area known as Pest. The divided cities of Buda and Pest were brought together as one in the year 1873, and the combined cities of Budapest were established as the capital city of Hungary.   www.travelwithkevinandruth.com

On a full stomach, we walked the 2 kms or so over to the Great Market Hall. We love visiting the markets of the world, and the Great Market Hall of Budapest is a good one. Unfortunately, on this particular day we weren't hungry enough to try and eat anything. Oh wait, yes we did...we saw one fruit stand that had these huge ripe looking peaches and we bought two of them. Meant to get a picture, but they looked perfect. Now, sometimes with fruit you never know how good it's going to be until you sink your teeth into it. Well these two peaches were perfect. Sweet, and dripping with juice! They were 114 forints ($0.49) each. 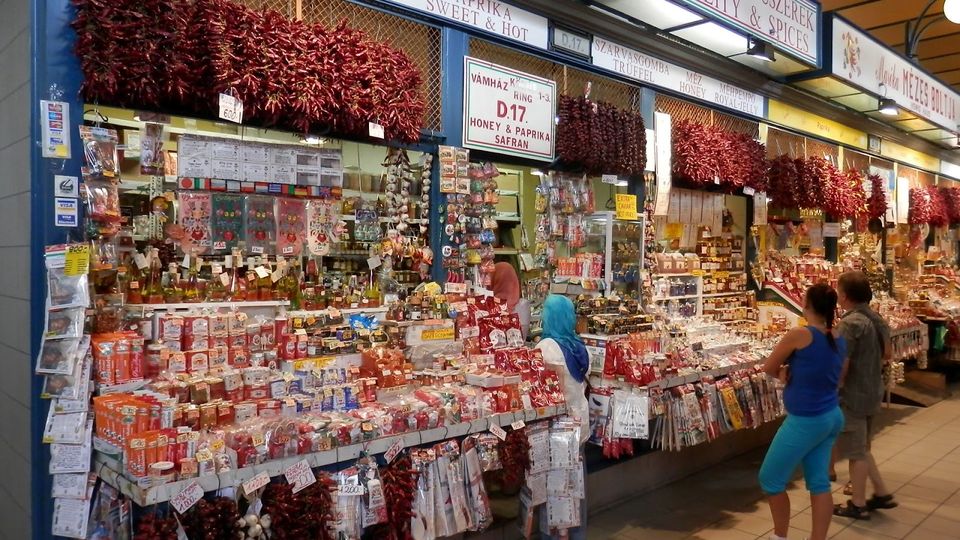 The Great Market Hall is located very close to the Danube River. The Danube is a busy river with a lot of sightseeing boats and river cruise boats. We stood and watched the boats for a while and then we crossed over the bridge and headed for a viewpoint. To get to a viewpoint usually means an uphill hike, and it was a warm muggy day. But, we wanted a view of the city, so up we went! 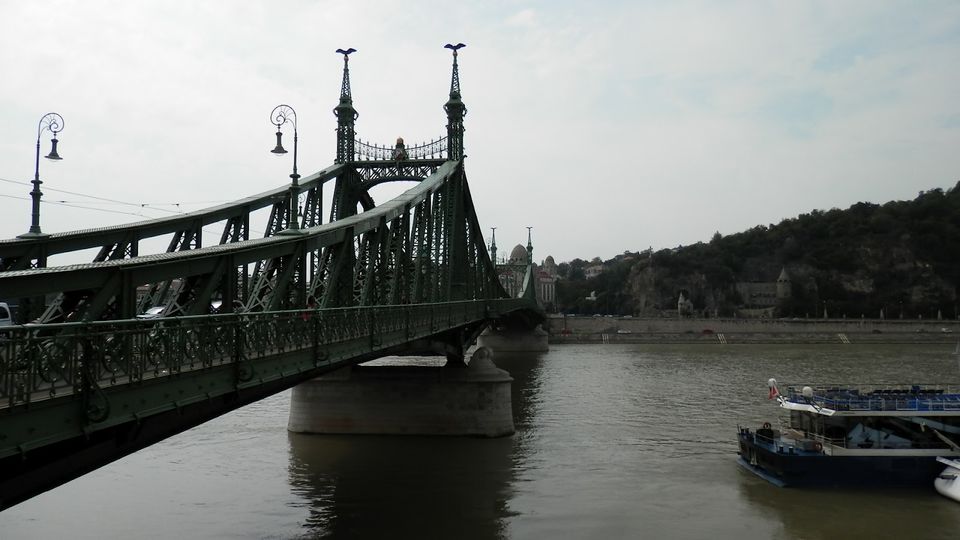 The Liberty Bridge was built between 1894 and 1896 but it was partially destroyed during WW II (as were all Budapest bridges!) and then rebuilt right after the war, and then had a complete reconstruction between 2007-2009. This "love locks" thing is fairly recent. Apparently couples attached padlocks to the bridge to symbolize their ever lasting love for one another. Learn something new every day! 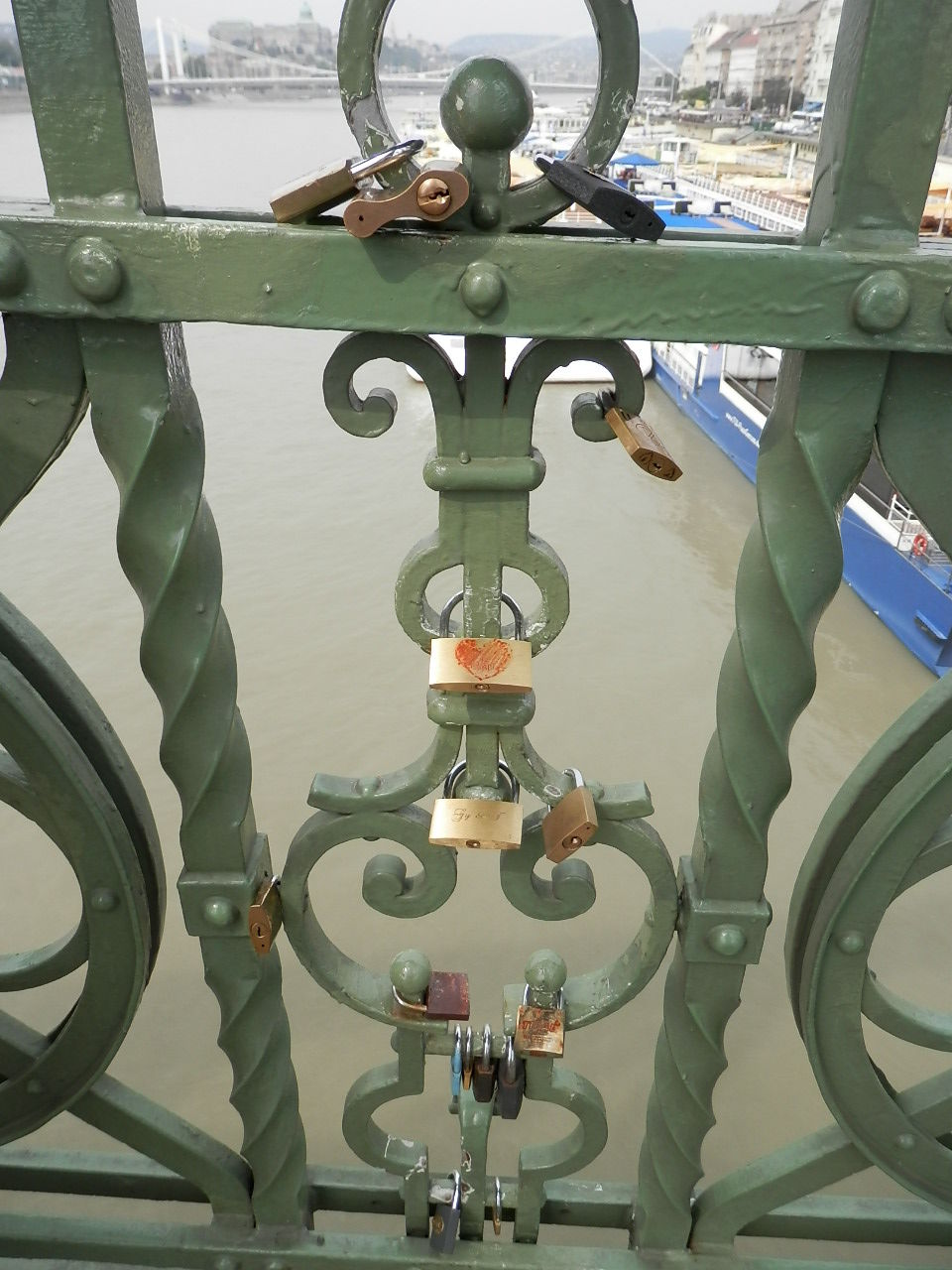 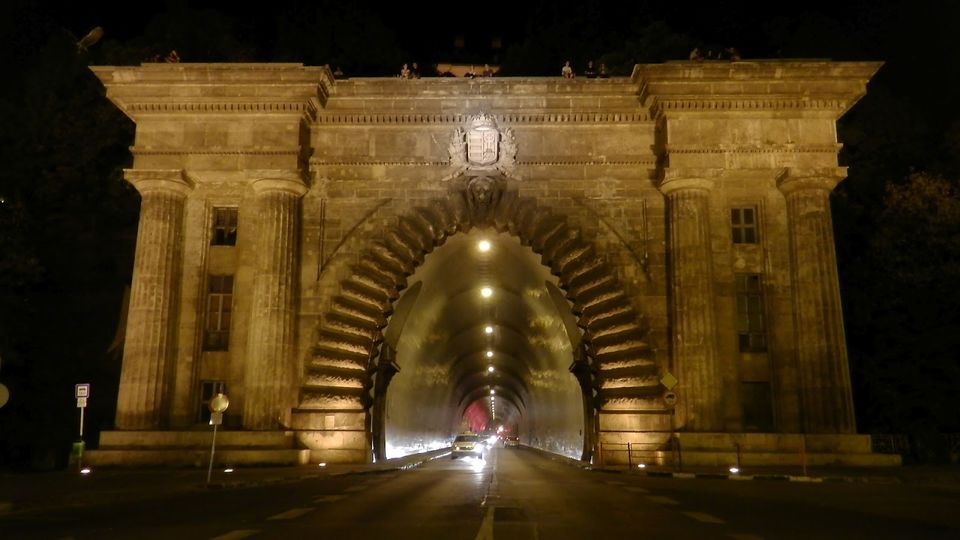 From there, we hiked up to Matthias Church which is part of the Buda Castle District. When we got up closer to the church and the surrounding area, it is simply amazing. We were allowed to wander all around the exterior, and there were a lot of people sitting out on this beautiful evening enjoying the weather. Even a couple of guys playing guitars and singing. We sat and enjoyed it for a half hour or so. It’s a little pricey, at 1,800 forints ($8.10) for the two of us, but we had been told that it was fantastic. We ended up with mixed feeling. On the down side, there was still a lot of interior renovation going on, and the ticket sellers should have told us that it wasn’t up to standards. So we were a little disappointed with that. On the other hand, it was interesting seeing the renovation work being done. 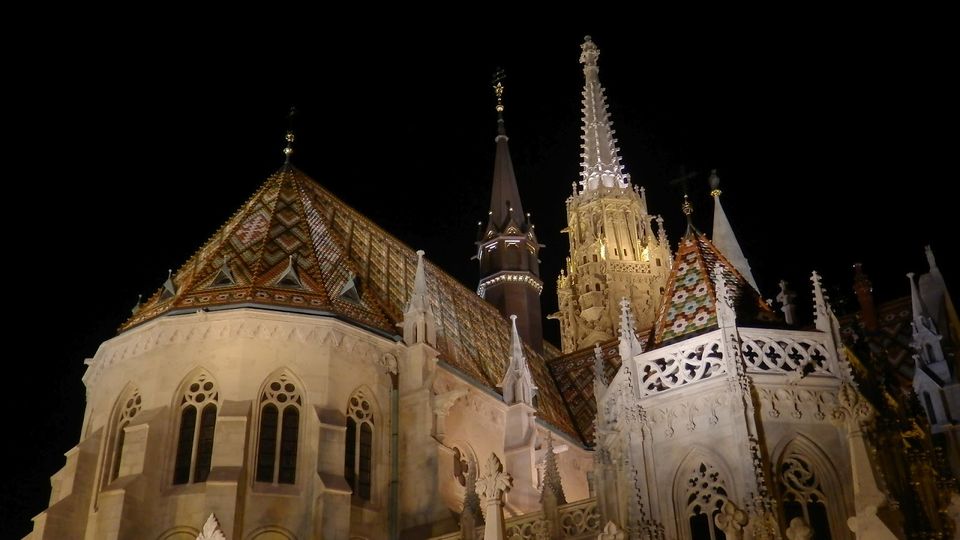 This huge church is not really that old. It was only completed in 1905, after 54 years of construction, which included demolition of the nearly completed building when the central dome collapsed in 1868 due to poor workmanship. It is free to enter the church, but they are very aggressive with trying to get you to make a 250 forint ($1.12) "donation". It's not a donation if you have to pay it! I know it's only $1.12, but it's the point. Figure that probably more than 1,000 people per day are going through this church. 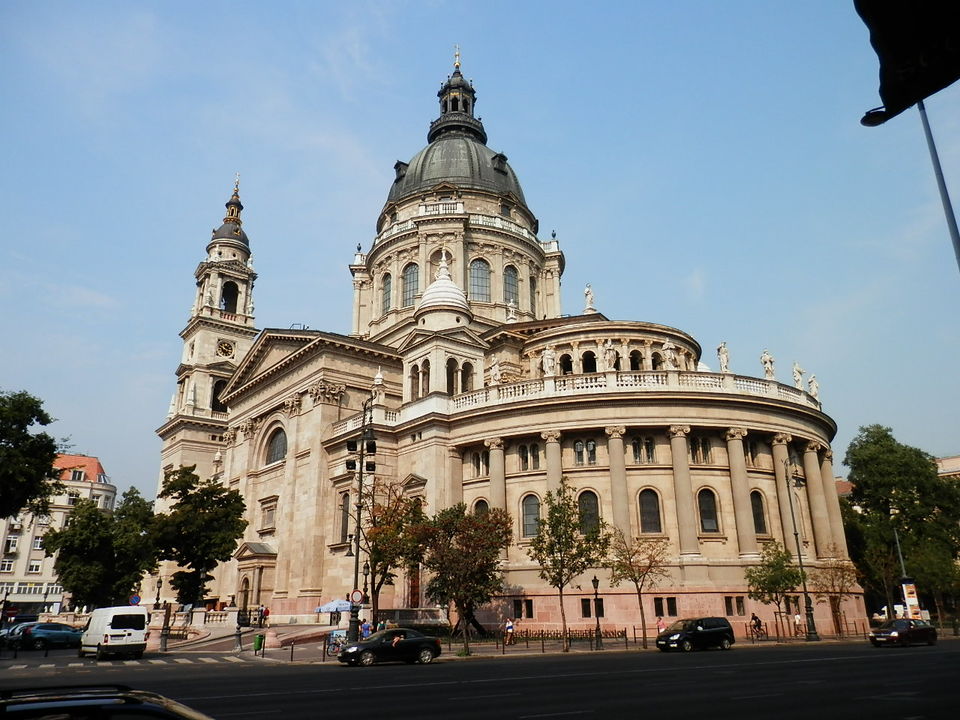 From there, we decided to walk down Andrassy Way, a long boulevard that runs down to Heroe's Square and the city park where the Zoo is. Part way along, we stopped in at Alexandra's Bookshop. We had walked by here before, and noticed that it looks like a Chapters bookstore but we didn't go in. Then reader Lyn told us about the cafe inside, so we stopped in to have a look. Sure enough, there's a beautiful room housing the cafe... 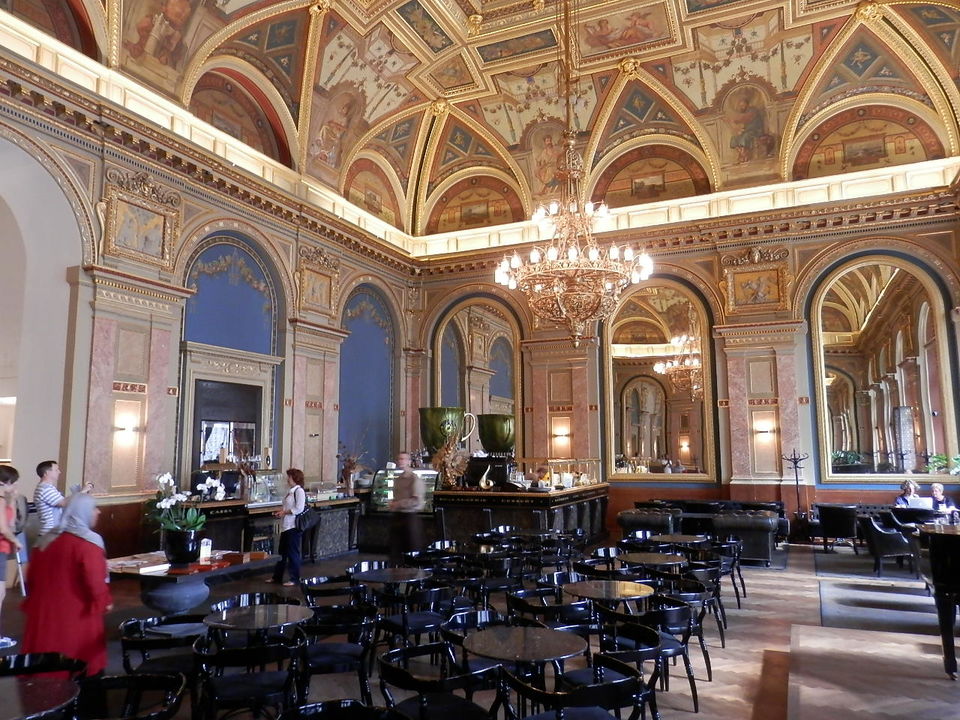 From there it was only a short walk to the Budapest Zoo. We've already been to the Mexico City Zoo and the Bristol Zoo this year, so we wouldn't have normally gone to another zoo but admission was included with the Budapest Card so we figured we'd go in for a quick wander around since we were in the area. We stayed longer than expected though. It's certainly not one of the best zoos we've ever been to, but it did have some highlights. They have probably the best display of snakes we've ever seen. Plus we did have a couple of memorable moments with some of the animals that we saw so that made it more enjoyable. And for a small zoo, it seemed to go on forever! But some of the displays are dated. Kind of felt sorry for a few of the animals who's enclosures seemed a bit small. 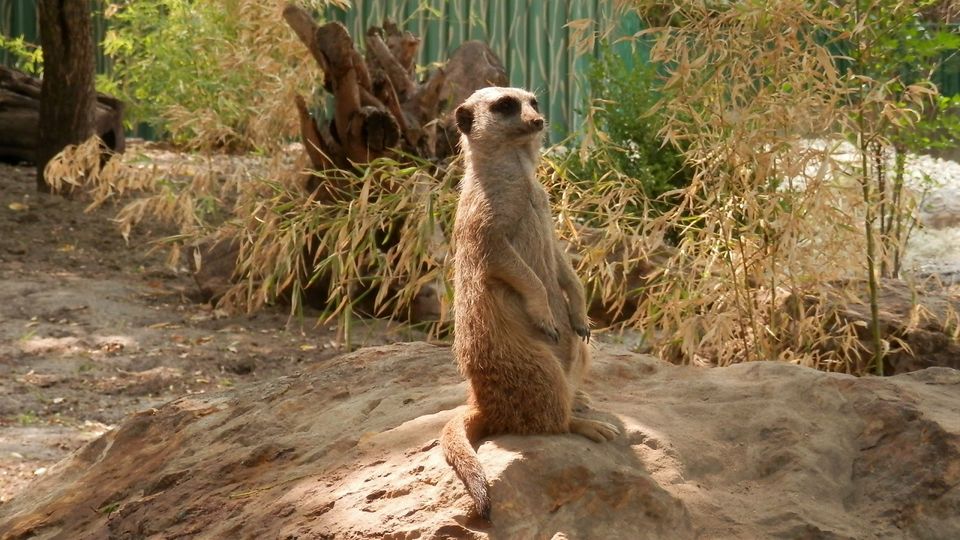 After dinner, we walked down to the waterfront and took the tram along to the Margaret Bridge. Walked across the bridge to get another night photo, then we were going to take the tram back but we ended up walking the entire way back along the river. It was another beautiful evening. 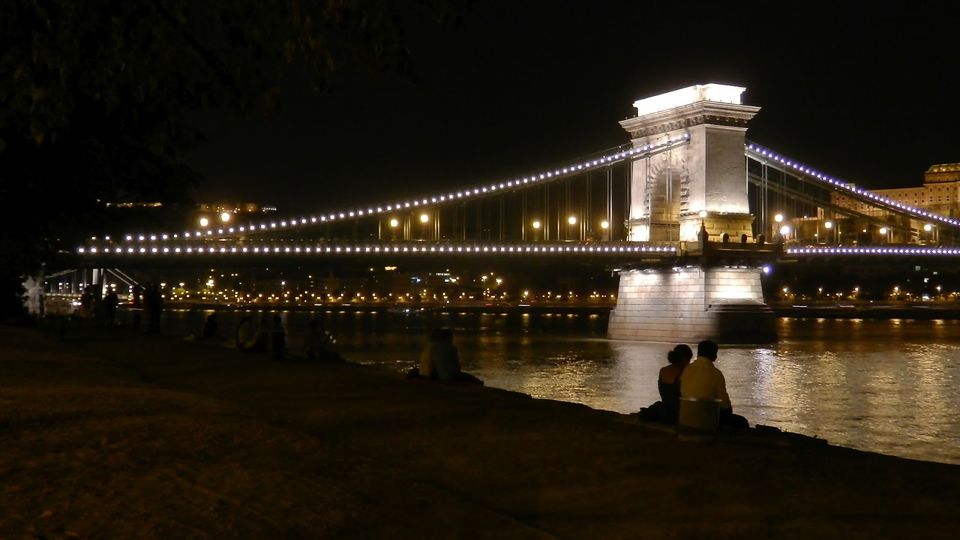 This is a monument to the Soviet soldiers who lost their lives during the liberation of Budapest during the Siege of 1944. Budapest had been an unwilling satellite location for the Germans, and Hungary itself was trying to quit the war. There were many atrocities taking place in Budapest and the residents were living in terror. The Soviet army came in and after a bloody battle claimed victory over the Germans. And then they never left! And a new kind of terror began. This is the last monument to the Soviets that is left in Budapest and many modern day residents would prefer to see it gone. It now has a temporary fence around it to protect it from vandals. 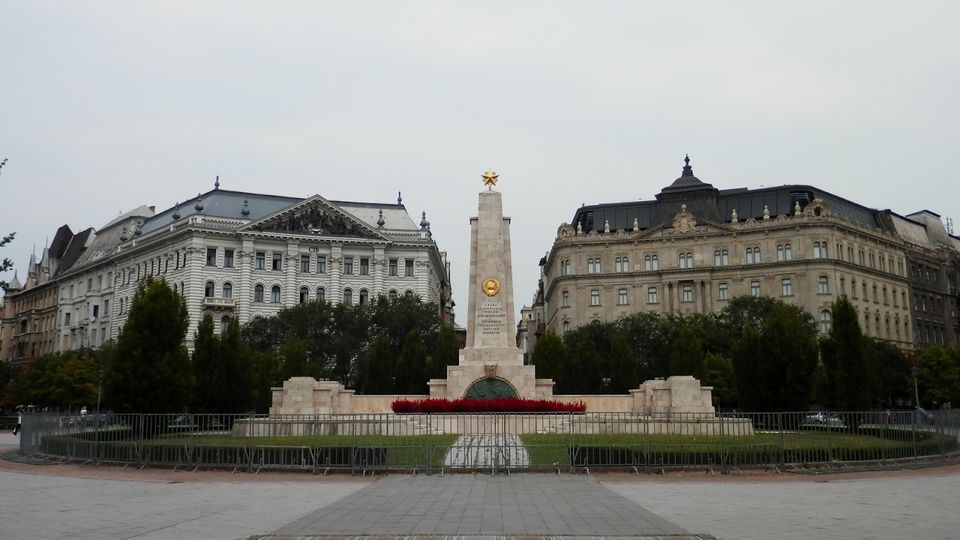 Well, we don't know if it's the best, but we can't figure why anyone would want anything better. The Casati Budapest Hotel has everything you would need, as well as a helpful staff that are proud to show off the newly renovated boutique hotel. The hotel is located in an 18th century building that used to be a series of apartment flats. It was turned into a hotel in 2001 and was formerly called the Hotel Pest. But a new owner has renovated the hotel and it's 25 rooms are now ultra modern, but still maintain the contemporary elegance of the building's original heritage.I have to say one thing. This bathroom has the best shower ever! Loads of hot water, easy to adjust the temperature, and one of those shower heads that makes you feel like you're standing under a waterfall! Absolutely heaven taking a shower here! There is an exercise room and wellness center in the basement. This is a great idea, because the workout room is naturally cooler and that makes for a better environment for your workout. But then, there's also a massage room where they will arrange a masseuse to come in and relax your muscles if you wish, and a sauna room as well. The hotel has an excellent location, within walking distance to everything in the central area and only minutes from the nearest Metro station as well. The hotel is quickly becoming a popular destination and it might be worthwhile to book in advance. 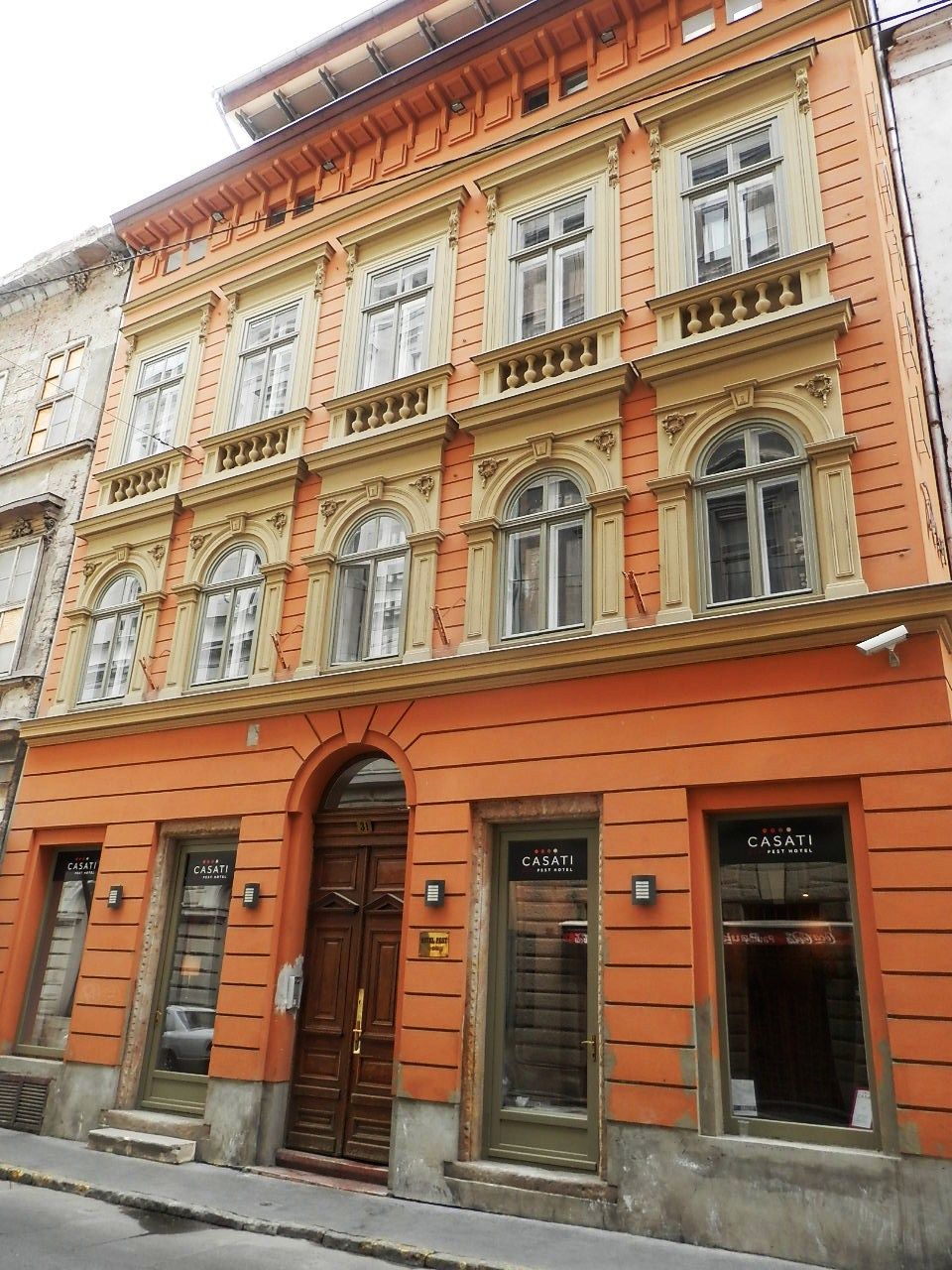