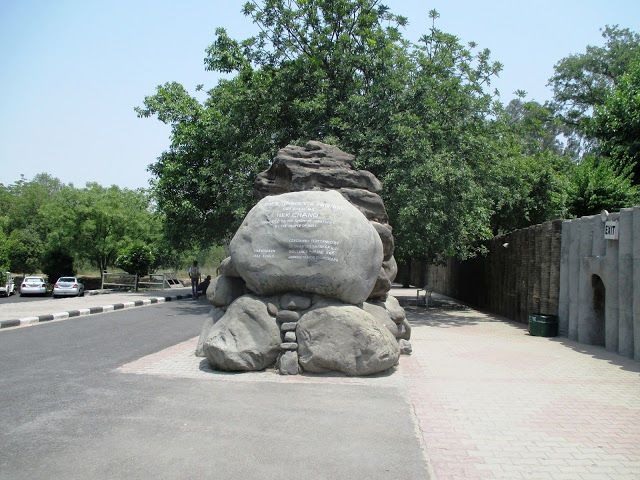 Rock Garden, built by Neek Chand, is considered to be one of the major tourist spots in Chandigarh, it is an interesting story behind how this non-statutory construction has made its place as a tourist destination. The talk is about the time when the cities of Jawaharlal Nehru's dream city were being constructed in accordance with the guidelines of Carburgeier, but surprisingly the rock garden was not part of that plan. Now the question arises if the maker of Chandigarh did not make this garden, then who made this fort, this garden or this palace made of junk. Do not understand what about this place, everybody who has their own There is silent witness to the vibrancy and the workmanship of your Creator. What is not there is waterfalls, culverts, mountains and other artifacts and how it will be constructed -

The Rock Springs of the Rock Garden

This thing has come to be known that when some place is developed then its old times have to be extinct.Okay it happened with Chandigarh too, where on one side a new modern city was born On the contrary, many villages were unaccommodised, many buildings and many old buildings were broken down. In this way, lots of garbage collections of old buildings and buildings also started accumulating. Then the problem began to come where suddenly such a garbage should be put. Now these garbage started to be stored in the store located in the Capitol complex. Nek Chandra ji, working in the PWD department, was waiting for the store to look after this store. As the garbage empire grew, the caregiver of this store started losing his imagination. Ever see those broken tiles throughout the day, sometimes the pieces of washbasin and sometimes other residues.It was not known to anyone that they used to be in the thoughts. Gradually, when he moved a lot in his imagination, he began to look after the store in the day and disappeared in the dark of night. Slowly the days, months and years have passed, and the world of Nek Chandra's imagination started to appear in this earth. Until the ten years of long interval, when the nights started disappearing, people doubted where they lived and what they did. Then a government officer finally searched after discovering this noble cause of Nek Chand and he complained about illegal construction. But the people of Chandigarh not only appreciated the work of this great person but also brought it to the list of major tourist destinations of Chandigarh. In this way Rock Garden came in front of the world's eyes. If the theft was hidden then imaginary statues were created here, and after that these constructions went on growing. In the summer, from 7 a.m. to evenings with the evening till 6 o'clock in the evening and six o'clock in the evening, these gardens are open for tourists seven days a week, with entry fee of twenty rupees only.

We got out of the Museum Complex and once again got into a double decker and it left us rock garden in about half an hour. Sardarji had said that if he came in one and a half hours, he would stay for us, so thinking of looking at the rock garden leisurely, we talked to Sardar ji by bye. When he came out, a pile of three stones was seen from the front, the name of the garden was marked on the sight of him. After seeing this, we joined the giant line at the ticket office. Going forward, showing a very artistic gate, we forgot to understand it as the gate of the rock garden, going inside, it became known that it was the cafeteria. Then he went to the main gate of the Rock Garden to repair his mistake.What is it that has been made, then anyone will forget about it. Inside, various types of artworks made from many narrow paths, clay climbers, old chains, old tiles, etc. welcomed us. Many times it seemed as if we were roaming in a fort but seeing the other thing in the second moment, the illusion was breaking down. The water flowing water yesterday was giving some different realization. In total, this garden of Nek Chandra's dream made of a junk pile, together with modernity, was associated with old age. If the roaming roar, there was a lot of heat, then in the place of a cave a little late in the place. After seeing a few more shapes, we moved out of here and then went back to that cafeteria. Potatoes of potato were found on the plate, but they were also on the correct rate. After drinking the food, now we had to think about the return and after following the path stated by Sardar, we reached the bus station of Sector-seventeen and took out our luggage after going to the clock room. Now the next floor was from there, a bus and a pick up of the airport which answered in front of the airport. Take a ten minute walk from the airport and then back to Bangalore. You will meet again at a new place, until you see the rock garden -