Several cities in India are named after a powerful Goddess, have a beautiful lake with a promenade, have tree-lined roads, are hosts to unique museums, have been developed with a plan and are very close to hill stations and getaways. But there is only ONE city that has some unique features apart from the ones mentioned above. This city is the capital of two states. This is the only city with its own unique hand gesture. This is the only city where you'll find areas with no names like Mahatma Gandhi road or Shahid Bhagat Singh Marg or Akbar street or D'Souza lane. No, this city uses only numbers, like sector 17, sector 25, sector 42 and so on. All roads are laid out in neat and straight lines, intersecting at right angles at traffic islands, none of which have statues of politicians, sportsmen and freedom fighters. The city has a unique garden made by a government official who gathered waste material and scrap and turned them into something beautiful. A school in this city has a unique collection of dolls from all over the world and prides itself as the International Doll Museum. The city was built by the French designer Charles-Edouard Jeanneret or Le Corbusier ('raven' in French), a nickname apt for the man with a far-sighted vision, a vision well into the future.

Can you guess which city this is? It is the first city that India developed with a city plan after independence (so not counting ancient towns like Harappa or Hampi). It is Chandigarh, a union territory, which is also the capital of both Punjab and Haryana states. We say this with Chandigarh's unique hand gesture: 'We Love Chandigarh'.

Here are some really enjoyable places in this beautiful city. 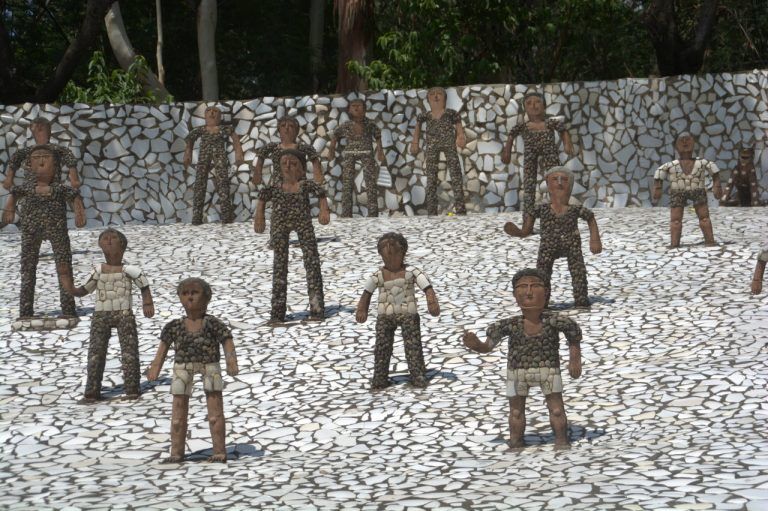 Padma Shree awardee, Nek Chand Saini, born in Pakistan, shifted to the Indian part of Punjab after the partition. He finally relocated to the newly built Chandigarh, finding work as a road inspector at the Public Works Department. Nek Chand had a calling for art. While working at the PWD, he started collecting the non-decomposable waste in the city, such as paper, plastic, jute sacks, ceramics and rag clothes. Painstaking, he and a small team he had assembled started turning these discarded materials into work of art, such as human figurines, sceneries and other shapes. Nek Chand chose a small place near the city's Sukhna lake to showcase his collection in a small park.

An ode to Nek Chand, the creater of the Rock Garden, Chandigarh. 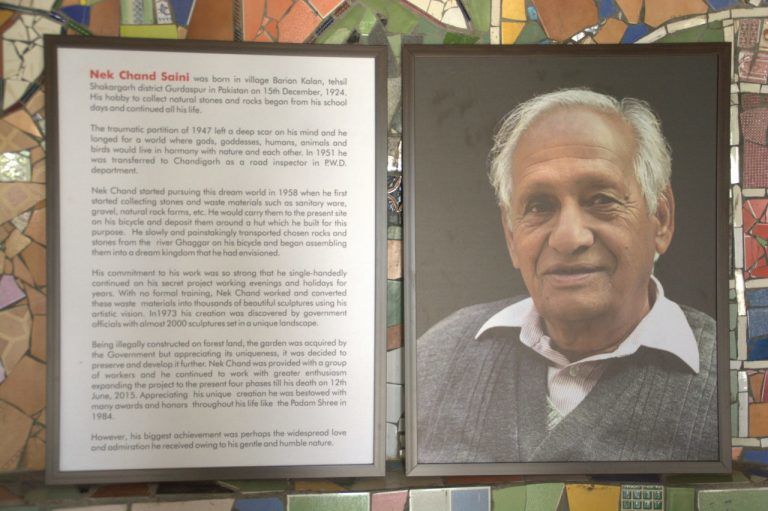 The collection grew, but the park was not yet authorised by the government of Chandigarh. When they got wind of it, they planned to shut down the park, ruling that the land was acquired by Nek Chand without permission. This was correct and Nek Chand was ready to give up. But the people of Chandigarh had seen his work and had fallen in love with the park. Together with Nek Chand, they appealed to the government of Chandigarh, not only to let the park remain, but also to fund it for maintenance and to allow it grow further. Fortunately, the Chandigarh government saw the popularity of the park and also its potential to flourish as an expression of art. They also saw the potential of the park to earn money through tourism. Promptly, the park was funded and advertised as a major tourist attraction. Nek Chand's PWD department work was given to someone else and Nek Chand was made a full-time project manager for Rock Garden, salaried by the government. His work later earned him a Padma Shree award.

The park is so unique that it is hard to describe it in this post through words. So I attempt a summary. Once a small park, it is now divided into five phases, with connection passages between the phases. Each phase showcases something different. One phase is all about work with old pottery and broken ceramics. Another one uses rag cloth dolls to create everyday village scenes. Yet another one has artificial waterfalls. There is also an aquarium. Finally an open ground with a stadium has several tall swings connected. Children and adults alike enjoy using the swing.

Rather than try to get a mental picture of Rock Garden through our post, we encourage you to visit Chandigarh and see this work of 'best-out-of-waste' with your own eyes.

Sukhna Lake from the Promenade

Quite close to the Rock Garden is Chandigarh's own waterfront. Sukhna lake is a lake formed by several streams flowing down from the lower reaches of Himachal Pradesh into this catchment area. The lake attracts a variety of bird life throughout the year. On one side of the lake is a long promenade where you can go for a walk in the evening. Near the main gate of the promenade is a food court with several street food options, Delhi and Amritsar style, and even a touch of Mumbai. The most unique dish is paan chat, a chat made with fried betel leaf as the base. 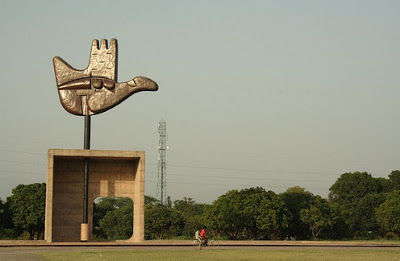 The Capitol Complex or the Le Corbusier park is the first public structure built in Chandigarh. It was made when the city was constructed. The complex houses the High Court and the Legislative Assemblies of the Punjab and Haryana governments. There are several lawns and flower gardens in the public area of the park and is dotted by walkways. The main highlight of the park is a structure with the figure of a human hand installed on top of it. The palm is open and the thumb is outstretched. This structure, referred to as the open-handed monument signifies the de facto hand gesture of Chandigarh, meaning that the people are open-hearted and welcoming. It is common in Chandigarh to hold out your hand in the same gesture and say, "We love Chandigarh".

At the courtyard of sector 10's Government Art Museum, every evening, a sound and light show showcasing the history of Chandigarh takes place. This show starts with the time when the city was envisioned by the newly formed government of independent India, the planning and execution by Le Corbusier and what the city is today.

There are several botanical gardens with large lawns all over Chandigarh. In the evenings, people come here to chill out with their families, taking a walk around the the pathways or sitting on the lawn grass. Unlike many parts of India, the residents of Chandigarh do not leave the grass untidy with food debris. Here, the residents are extremely proud of their city and extremely conscious about cleanliness. The rose gardens do not have many flowers if you visit Chandigarh during summer vacation, but there are in full bloom during August - November. 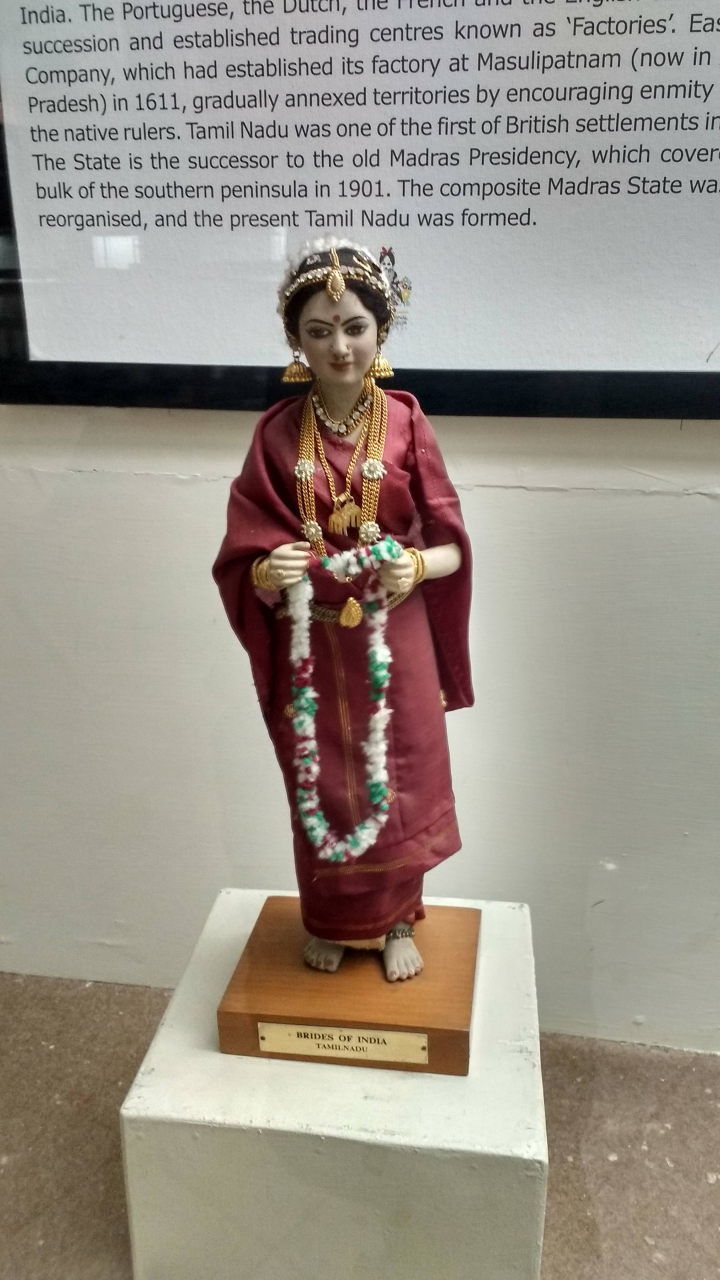 In sector 23B, inside an ordinary looking primary school named Bal Bhawan, is one of largest collection of dolls and toys you'll ever see. There are dolls representing brides and grooms from all Indian states. There are dolls from several countries, such as China, Japan, Russia and even Sweden. There are dolls set up in scenes from Indian mythologies and British fairy tales. There is also a large table with a model train set.

10 km from Chandigarh city is the temple of Chandi Devi, the Chandi Mandir. This deity lends its name to the city. 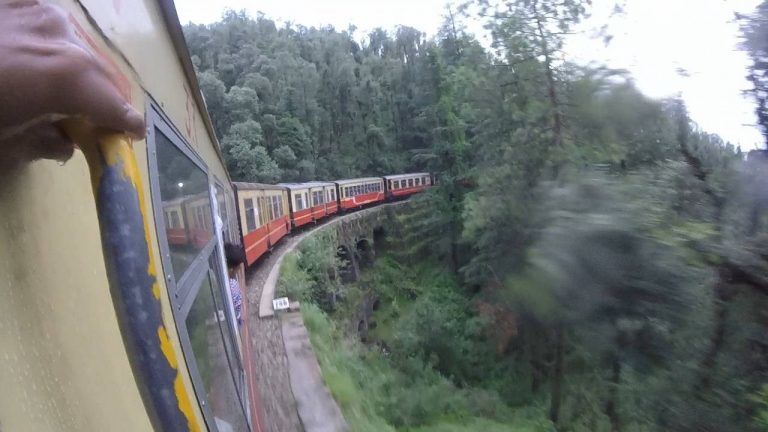 Within 20 km of Chandigarh, the slopes of Himachal Pradesh start. Hill stations like Kasauli and Shimla are within 100 km of Chandigarh city. Kalka railway station, one end of the heritage Kalka-Shimla narrow gauge mountain railway is within 30 km of the city.

Chandigarh is connected very well to all of India. Here are the options.

Chandigarh airport has several flights to all the cities in India. Major cities like Mumbai, New Delhi and Bengaluru have more than 10 flights per day.

Chandigarh railway station, though on a branch away from the main line, is a well-connected railway station in the Northern Railway zone's Ambala division. The station is on a branch line connecting Haryana's busiest railway station, Ambala Cantonment, to Kalka, the base station for Kalka-Shimla heritage mountain railway. Apart from trains destined for Chandigarh, you can also book your berth on trains destined for Kalka to alight directly at Chandigarh Junction railway station. You can also book a train to the more well-connected Ambala Cantonment station and take a Haryana or Punjab State Transport bus that plies on the New Delhi - Ambala - Chandigarh Express Highway or one of the passenger trains that connects the two cities. If you are coming to Chandigarh from Himachal Pradesh (which we did in trip India 360), then grab the chance to enjoy the mountain train ride from Shimla to Kalka. At Kalka, you can catch a passenger train or a Haryana / Punjab state bus to reach Chandigarh.

Chandigarh is connected by several national highways, the most important one being New Delhi - Kurukshetra - Panipat - Ambala - Jajjhar - Chandigarh Express Highway. Buses from state transport corporations of Haryana, Punjab and Himachal Pradesh use the highway to connect New Delhi to Himachal Pradesh. Depending on their route, the buses will stop at one of two ISBTs (Inter State Bus Terminals) in Chandigarh, one being ISBT sector-17 and another being ISBT sector-43. For buses whose routes thread through both the ISBTs, a long halt is made at sector 17, while a short halt is made in a bus stand right outside ISBT sector-43.

We won't recommend any transport other than the awesome city buses run by Chandigarh Transport Undertaking. The city buses cover three city conglomerations: Chandigarh Union Territory, Mohali -Zirakpur city areas in Punjab and Panchkula in Haryana, collectively known as Greater Chandigarh or Tri-city. The maximum fare for a single non AC bus trip is ₹20, whereas that for an AC bus is ₹25. In addition, you can get a day pass, that allows you to roam the tri-city area all day in as many bus trips as you please. The non-AC day pass costs ₹50, whereas the AC day pass costs ₹60.

Just be mindful of one thing. Around Sukhna lake area (i.e. sector 1), the buses inexplicably stop plying as early as 7 pm. If you roam around the promenade well into the dusk, you will have the nasty surprise of not finding buses for the next 4 kilometres until you reach the city's commercial centre and transport hub, Sector - 17. Look for an alternative transport such as Uber in such cases. The areas around sector-17 will always have buses even late at night.

A dish unique to Chandigarh: Paan chat, where fried betel leaves are used in place of puris. 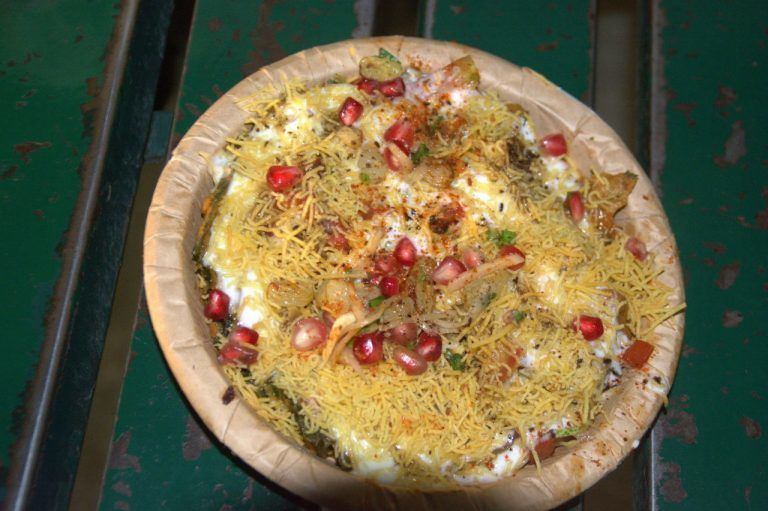 In terms of food, consider Chandigarh to be an extension of Punjab. Typical Punjabi dishes that you hear about so often about are all available in Chandigarh. Start your morning with Chhole Kulche or Bhature. Tuck in a sumptuous lunch with tandoori roti and paneer / chicken, washing it down with lassi. In the evening, have a paan chat near Sukhna lake accompanied by a glass of tea. And why not have naan and Sarson ka Saag, a gravy made of mustard and greens, for dinner?

The wide straight roads of Chandigarh and the seperate footpath and bicycle lanes. Chandigarh’s roads are a real treat! 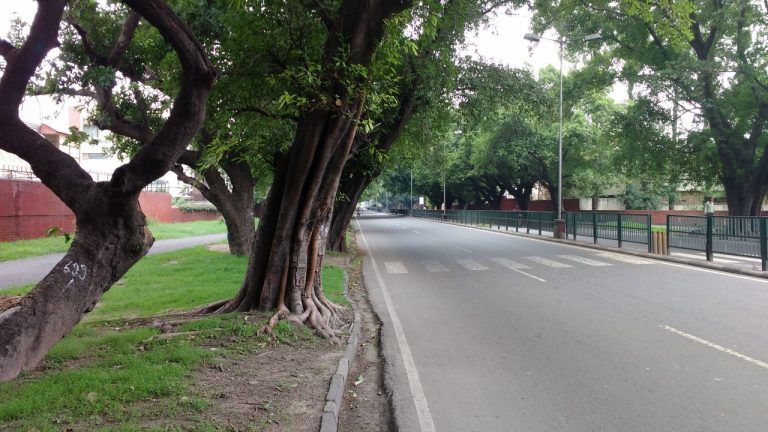 Chandigarh is a very clean, immaculately planned and beautiful city where you can easily spend two nights / three days. Most of your time will be spent walking on the broad tree-lined footpaths by the side of straight, flawless roads. It has plenty of unique things to offer and the stay is quite enjoyable. It is definitely worth a visit, combined with a getaway to the Himalayas of Himachal Pradesh.