Trip plan to Ella was made weeks back, with different people who later on backed off due to many reasons. I had done so well a research, that finally, I decided to go by myself and asked Lahiru with whom I always go everywhere with to join me. Within a day's time he confirmed. We were traveling from Colombo, and the easiest way to get there was the train. Ella, was not so popular as a tourist attraction 6 years or so ago. I assume it is because of the lack of facilities of transport, internet and decent accommodation/food in the area. But the past few years, with the trend of budget hard-core travelers, it has evolved as a must visit in a trip to Sri Lanka.

I had known that the train journey is of 8 hours from Colombo, and is quite a beautiful one. So I chose the day train and tickets over the counter which was about Rs. 150 (LKR) It was a weekend, and we did not get seats for about 3 hours. It was only at Kandy, (a famous stop where most people get off at) that half of the train got emptied and we managed to grab nice window seats. It was quite exciting for me as I had never traveled past Kandy, at least in the day time.

Lahiru had booked a small boutique lodge for us to crash in, which was not more than Rs. 2000 (LKR) for a night with breakfast. I think it was really fine and decent, as we only needed a place to rest our heads. We would be out all the two days. It had hot water facility and was within walking distance from the Ella railway station. In the same distance, there were some hippie style restaurants that catered to the foreign tourists as well. The Ella hike, as I had found out, should be started very early morning, so that you will reach the top by dawn, not missing the sunrise. It was around 2.30 pm when we reached Ella, so we threw our stuff at the lodge and roamed about in the village, and visited few places like Ravana waterfalls and cave, and the Ravana temple and had an early dinner (I will write about Ravana falls in a different story) We had an early day planned for the next, so fell asleep as we were a bit exhausted from the train ride and were cold.

Like most other stories, you might read, we did not wake up early. It was because we were told by the lodge owner that the hike starts with a trek through the railway and at 4 am you need a good torch to save yourself from insects and other animals. Which, we did not have. There was no other flat road to the hike entry point and everyone had to walk through the railway. We could not remind him to pack breakfast early the day before, so everyone was fast asleep and we decided to stay back for a while till the light outside was fair enough to make the road. Around 5.30 am, we stepped outside, and walked towards the station. The trek was about 40 minutes. The station too was deserted and empty, as Ella is not a connecting station, and only two trains stopped there every day. There was a black dog sleeping on the platform, and with our arrival he got excited. Probably thinking we had some food for him. I normally keep away from dogs and tried my best to drop it off but it kept walking with us! Lahiru liked him, and he tagged along the railway trek. A jobless dog, I'd say! We named him Tommy.

We kept on walking, it was not so tiring as it was early morning and the weather was refreshing. Our walk slowed down, as we couldn't help clicking photographs or the unmissable beautiful backdrops and distant waterfalls that appeared as white strings flowing down the hills. And of course pictures of each other, like the one above! We came across a bridge that connected two steep hills on which the railway continued to flow. We witnessed a Ceylon Jungle Fowl, (an endemic bird and also the national bird of Sri Lanka) that hurried its way across the railway and disappeared into the jungle. I wondered how long we had to go, or whether we missed the turn to the entrance of the hike. Few children were walking towards us to the station, probably dressed in school uniforms. We asked them for help to find the exact left turn to the hike and they told us that we have to walk a little more to find a Bodhi tree, and to turn from there. We came across people going for work, farmers carrying their goods and they all offered a warm smile as if they knew us from many years. I have never seen this practice in people from Colombo, who are always busy and lost in their schedules, to be noticing anyone around them.

Finally we reached the Bodhi tree, ending the railway trek, with a small tea shop next to it. I saw a young lad, sitting near the tree with a stick in his hand. He smiled at us, as if he was waiting for us to talk to him. Even though we were quite clear about the turning point, I still asked him how the way ahead is like. He eagerly answered, that we need to walk till we find the river that turns into a waterfall; we are supposed to walk over the bridge. We thanked him and moved ahead. His name was Nalaka. I need to remind that Tommy was still with us, stopping and continuing according to us! I felt so bad that I did not have anything to offer him.

We continued our journey and it didn't take long for us to get to the river, where it broke off into a waterfall. I had only seen a very few starting points of waterfalls, and I assumed it as one of the falls of which we clicked pictures of when we were on the railway.

We kept walking as we realized the path is no longer flat, but a slight climb. I had to put in more effort to keep track. At this point we walked into a bunch of stray dogs that started barking at us, as if we trespassed their territory! Their main target was Tommy, someone they probably took as a traitor! We managed to save Tommy and ourselves and continued further up the hill through a small patch of tea plants. The walk was getting tougher, and we slowed down in pace. There were by lanes going everywhere and we were told by Nalaka to get to this junction, that we could not trace. We stood there lost until we heard a distant voice calling out to us.

It was Nalaka, now visible from top of a small cliff far across the river that we passed. He had been watching us ever since we passed him. Thankfully he noticed that we were about to take the wrong path, so he had called out to us. Finally, we were back on track, and we found the junction as well, that headed towards east. The climb was too hard.

Sideways of the mountain 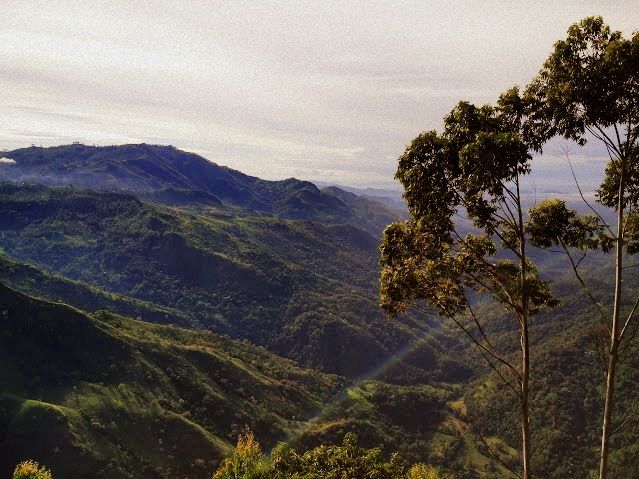 Fantastic view, worth the climb 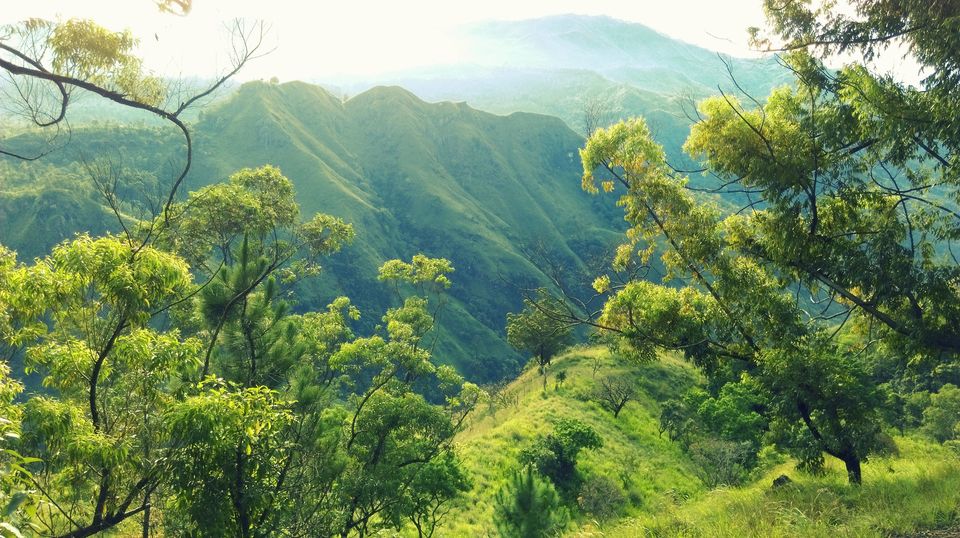 The top of Ella rock and the view down 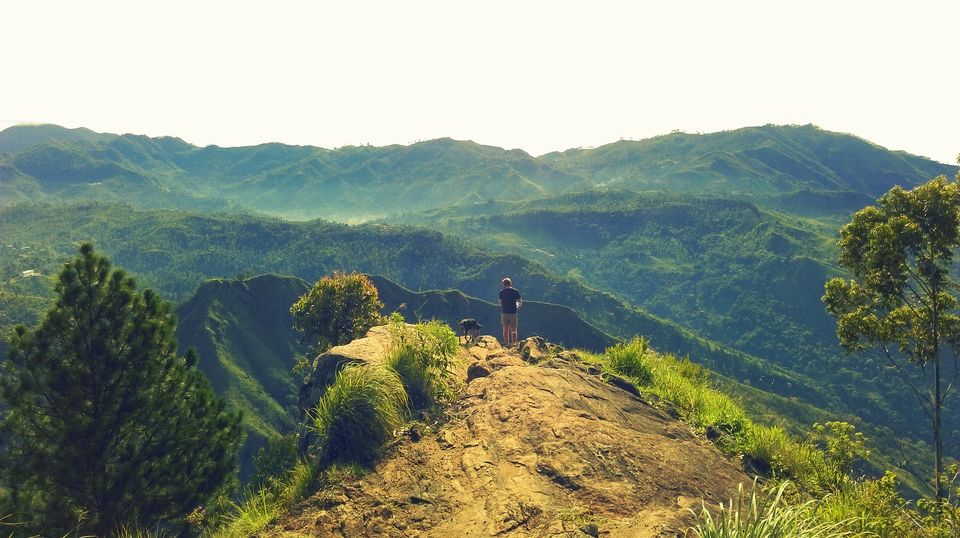 We sat on the edge of the mountain and talked for so long about England and Sri Lanka. It was peaceful, undisturbed and there was no one around except for an old uncle who served tea at a small set up under a tree. He said that people like Ella, as it is not crowded and had the best view ever from the top. All we could see, was green color everywhere, hills covered with trees and nature at its best. It was so mesmerizing, that we lost track of time and couldn't come down to catch the train at 11 am from the station back to Colombo. We had to take a bus and the journey was quite tiring by road. 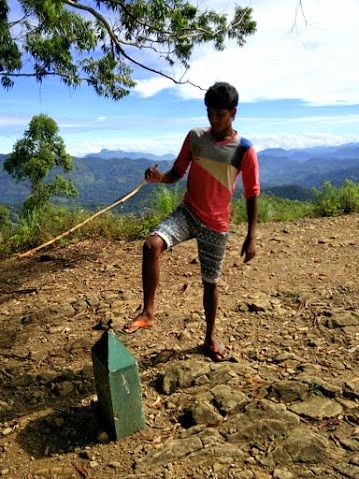 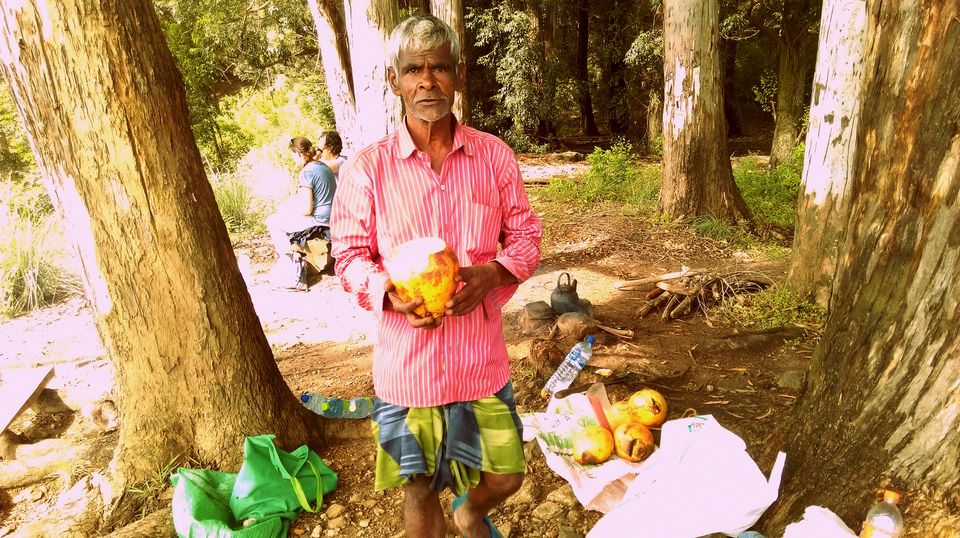 Ella, is a small town in the Badulla District of Uva Province, Sri Lanka governed by an Urban Council. It is approximately 200 kilometres (120 mi) east of Colombo and is situated at an elevation of 1,041 metres (3,415 ft) above sea level. The area has a rich bio-diversity, dense with numerous varieties of flora and fauna. Ella is surrounded by hills covered with cloud forests and tea plantations. The town has a cooler climate than surrounding lowlands, due to its elevation. The Ella Gap allows views across the southern plains of Sri Lanka

We stopped by, to click some pictures, and finally we came to a small sandy path that leads through the forest, shaded by trees on wither side. The sun was shining brightly upon us and suddenly, it was not so cold anymore. The mountain range was clearly visible on the left side of the track. We decided to sit and rest for a moment. The cooling breeze mixed up with the slight sunshine set the perfect weather. The trees had branches starting so low, and I decided to try my tree climbing skills here! I sat on a tree and was about to climb further up when I saw Nalaka walking towards us with a foreigner, solo traveler I assumed.Sandy 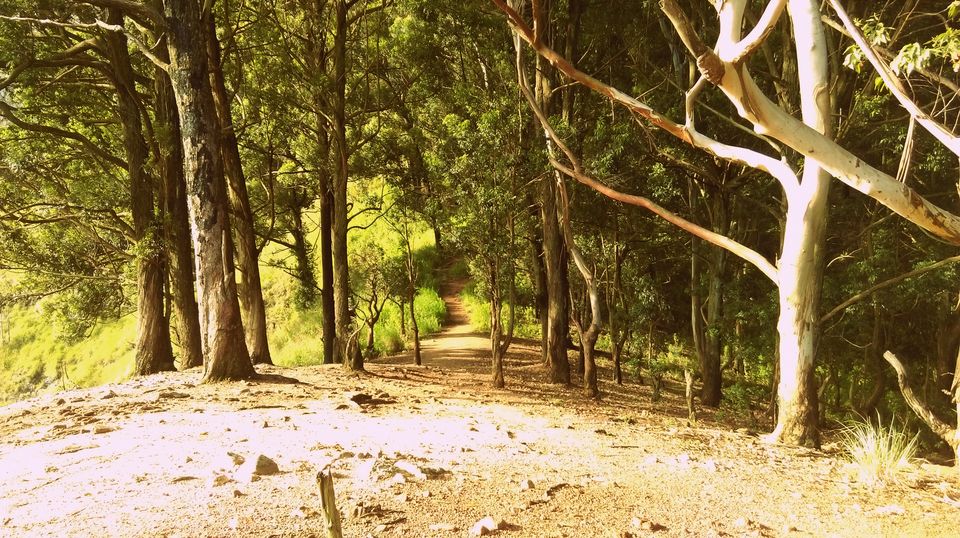 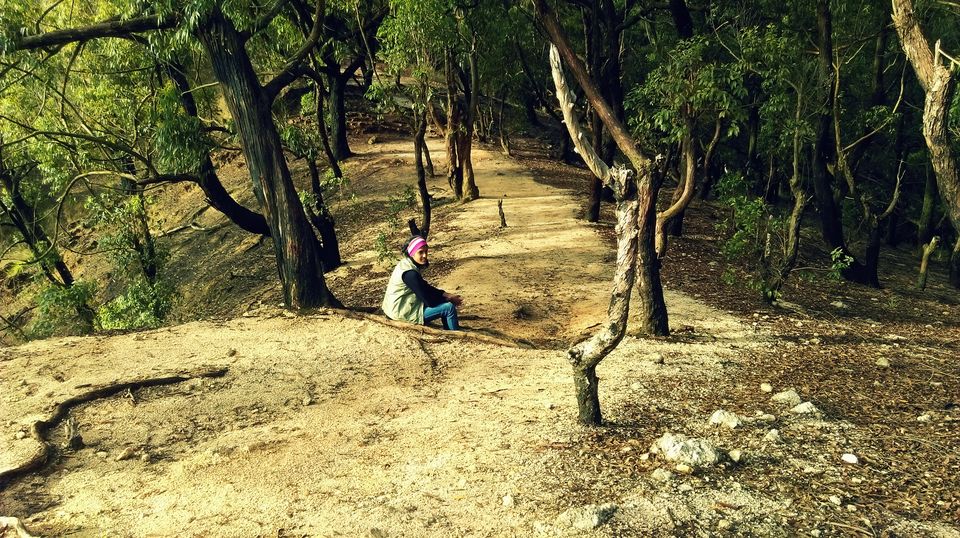 He introduced himself to us as Nathan, from England. And that he met Nalaka and wanted his help to find the rest of the road. Village lads always offer to help tourists, mainly foreigners, as they get a little cash incentive at the end of the journey. Most village boys do guiding as a way of earning a living. Now that we had a third member in our team, we kept walking all together, with Tommy following us, talking to Nathan about his time in Sri Lanka.

Nalaka, walked far ahead of us, and sat and waited for us to arrive. We would arrive, panting grasping for breath. Nalaka had climbed this hill since he was a kid and is quite aware of where each small path led to. He was a drop out from school and worked in some small boutique hotels and then quit those too. He was a cheerful chap.

After about a 30 minute more climbing we reached the top. And the view was breath taking! I was super glad I made it to Ella. 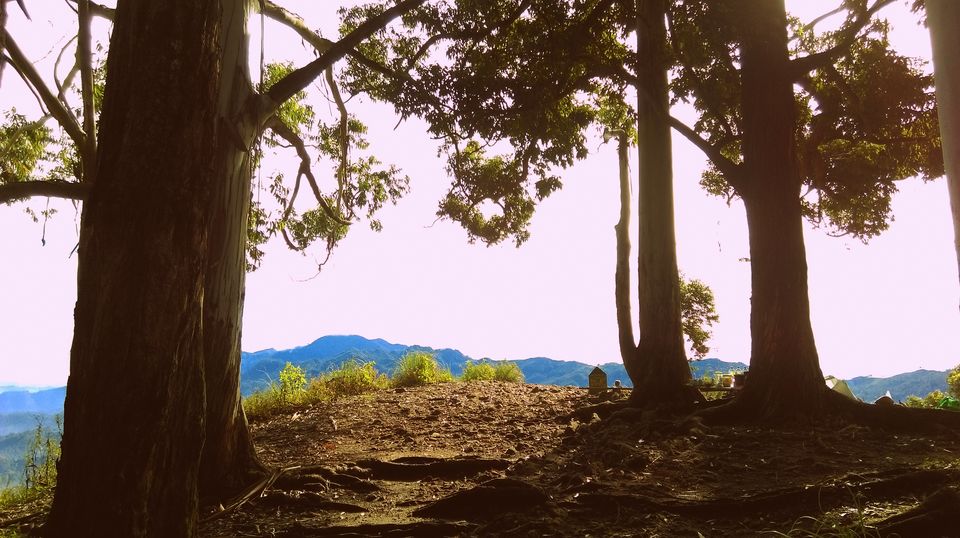 I recommend Ella to all Tripoto mountain lovers. The total hike (return trip) would take 3 hours, depending on your pace. It is a memory you will treasure forever!