It was always a given that Costa Rica would be vastly different compared to the other central American countries but the shock factor was imminent.  Crossing the dustbowl border was straightforward enough but we were welcomed by the attitudes we were warned about.  I was forewarned that Costa Rican people can often be quite indirect when disagreeing with you, especially with business transactions. Within hours of arriving a man at the border refused to discuss currency exhange due to a minor language miscommunication, a taxi driver slammed the door and drove off after refusing to charge by the meter and another driver scammed us out of a walking distance fare. A nice rude awakening in a new country, but we weren’t going to let it affect our judgement of the rest of the country, everyone else has been phenomenal.

The biggest impression it made is that unlike many of its neighbouring countries, it seems to be nearly entirely devoid of its own culture. Not because it never had one to start with, but simply because its heavy influence from the US has eroded any evidence to be gleened from a fleeting visit. However despite all of the Americanisms, the traditional native cuisine is unbelievably good. We’d had gallo pinto before but nothing compares to a Costa Rican breakfast. Chifrio was also a nice intersting take on the same usual ingeredients that we’d become accustomed to but with tons of flavour. The tamales are also worlds apart from the rest of the region and especially eaten during December, whatsmore we discovered that they’re even better with salsa inglese, quite possibly the worlds most delicious sauce. So we stocked up on bottles whilst we could, along with packets of manzanilla tea. Now under usual circumstances I would turn my nose up the offer of camomile, but manzanilla is an entirely different cup of tea. Its nothing like the stuff your nan drinks before bedtime, its absolutely delicious and I’m now drinking it like its going out of fashion, which comforts me in my distinct lack of green tea.
The nicest thing about it besides the amazing people we stayed with, was its lush greeness. The nature really did live up to its reputation,  we were shocked to learn that this tiny landmass boasts 5% of the world’s biodiversity, for that reason alone I’d be quite happy to go back and see even more of it.

We arrived in Tilaran in the wind and rain only to discover that there is only one bus per day to Monteverde so it was necessary to stay the night. But it was a pleasure to stay somewhere with the luxuries of carpet and hot water. Luckily Seb’s sister spent a year living nearby so we spent the evening trying to track down her host family. We found some leads using a photograph and a list of names, sadly the village of Sabalito was too far to venture too without an address so we headed to Monteverde the very next day. 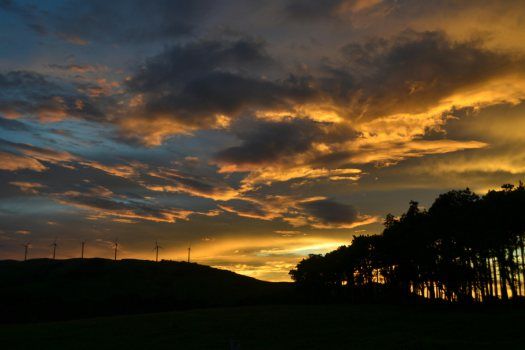 The roads were terrible, a 40km journey took 2.5 hours thanks to a road block from a tractor on a single lane track, so we sat and waited for it to finish the road builing so we could continue. We found a place with a kitchen and cooked up a storm during a storm, turns out the weather can be quite the swine during rainy season. But we were up early enough in the morning to spot a sloth before a zipline adventure. It was a pricey treat of an activity but just think of it as Go Ape on crack, because this was a whole new ball game of tree top advenures. Some of the wires were up to a kilometer long across the valleys on rainforest canopy, and because they we so high the views were incredible. Weirdly I found the small height rappelling one of the most frightening because you had to jump off and defy your instincts of a lifetime. But it didn’t come close to the pure fear of a Tarzan swing, which is a mere few seconds of solid adrenaline as you swing 20m at full speed hoping that you’re not the heifer that becomes a tragic statistic. The final superman line is insane. You’re suspended by a harness secured on your back and feet this time, so you get more of a sense of truly flying, arms out face first. 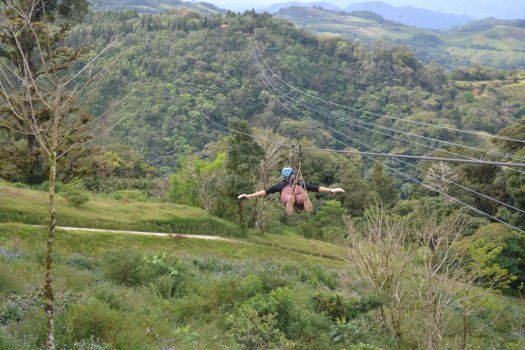 The tiny village of Sabalito is home to less than 200 people, so there were no tourists in sight, we had a few days of pure relaxation, learning how to salsa, getting a haircut with the aid of a translator, and playing football in the rain with the whole youth population of the village. The whole family were amazing hosts, we didn’t stop eating homemade food all day, which was wonderful but I was gaining weight at a rate of notts. We borrowed the car for the morning to drive to a yoga class at a retreat in the forest. The studio was a wooden platform suspended over the river below which made a nice setting with the pitter patter of water dropping all around. Driving on unpaved roads was worlds away from the comfort of the states, which must have been an initial shock to the expat masses in the area. I can’t believe how many Americans were living around the lake. Nicas had referred to it as ‘Costa Gringo’ on numerous ocassions but we thought that was an exaggeration and part of the general banter between the nations. We were obviously really sad to leave our new comfortable life but we had to make it on the road in time to visit families number two and three. 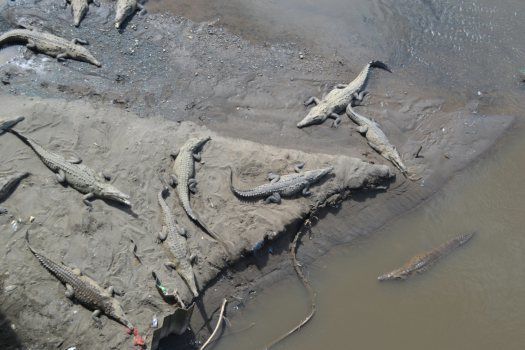 We had plenty of day trips from Grecia to entertain us, one was to spring clean the holiday house in the mountains, we explored our way down to the river macheteing our way through the dense greenery, really doing our bit for the rain forest. I normally swell like the incredible hulk after mosquito bites, but throughout the whole of central America I’d had no issues until now. Costa Rica has some sort of mutant strain that destroy you in one bite, so I was back to looking like a diseased mess again. We also headed to the entertainment complex on the outskirts of the capital to see the second installment of the Hobbit. 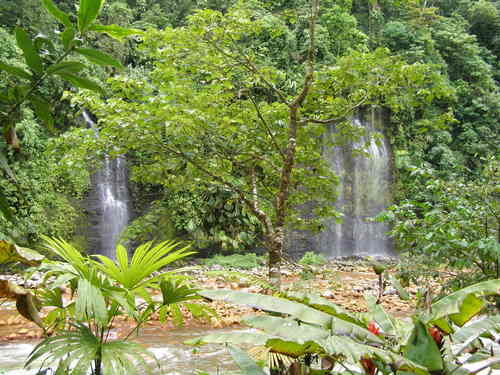 We only stayed the night at the beach, at Rocking J’s in the most expensive hammock in ‘a place where crazy paving went to die’. It was literally like a bunch of terrible artists with limited mosaic skills were let loose and paid only in acid tabs, something they used to fuel their decorating creativity. We weren’t too impressed by PV and were glad to be heading to paradise islands, but were now a little apprehensive that it wouldn’t be all it was cracked up to be. 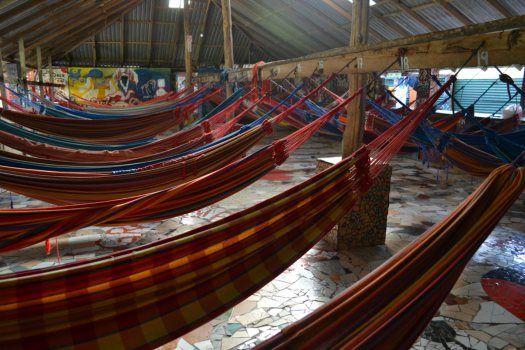 If ever you find yourself in Costa Rica and exploring Lake Arenal, then it is worth stopping by Mystica in Sabalito. They have beautiful accommodation and great food in their restaurant but for me the selling point is obviously the yoga studio. The studio is tucked around the back of the large site in lush green surroundings and sits on a platform with the river running beneath. The sound of the water is hypnotic and in rainy season makes for a lovely haven with the pitter patter on the roof. 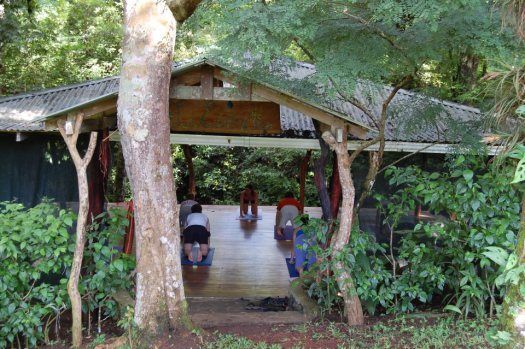