Wanderings through the Dev Bhoomi , Rewalsar

As the sunlight gathers itself in the evening and fades away,

I pass through your town in the same away.

I find succour in the dense forests,

I am afraid of destinations, not of the pathways.

Much later in my backpacking trip, as I would sit amidst the sounds of Jazz and shelves of books, opening a page at random from encyclopedic book of Urdu Couplets in a Cafe in McLeodgunj, the lines of Bashir Badr above would summarize more than I could.

A rough itinerary, a nation through currency ban, a calling that ran through my pollution choked veins and I was off. On my first solo backpacking adventure through Himachal for a good 12 days. Thanks all those saved up holidays and my manager's warning to stop making my Fridays into extended weekends.

The plan was simple. Keep travelling North through Himachal and if time permits come back to Delhi from Kasol. But the first lesson I learnt was the mountain roads do no follow simple geometry of straight lines and directions.

With my ticket booked for Mandi from ISBT ,Kashmere Gate using one of the last 1000 Rupee note I was bound to see, I left lights and skyscrapers on the night of 11th Nov. I intended to make my way to Rewalsar Lake as the first stop in my journey.

The bus dropped me and a bunch of other travellers at a still sleeping Bus Stop at 5 AM. Before the smoke of bonfires that I had so pined for, I would witness smoke from tea cups rising into the dark skies. Absorbing the air for a few moments , I made my way into the bus stand. A bus was about to leave for Rewalsar and I quickly hopped on.

I wouldn't yet see the terrain of the hills for the bus moved in the dark like a fugitive and an hour's journey had me at Rewalsar even before the Sun was up.

Entering the arch indicating the Rewalsar boundaries one notices the lake shadowed by a silhouette of mountains. The mountains were always there even before religious monuments embellished the lake. Aren't the mountains divine by themselves, I wondered.

I took a slow walk , circumambulating the lake biding by time for the Sun to wake up as well. The slow life of the hills was wading its way through my being.

I gave a perfunctory glance through the doors of monasteries that came on my way. My eyes absorbing the seamless amalgamation of a quaint town with all of its quiet Gods. The first glimpse of the Devs of the Dev Bhoomi, Himachal.

Much slower than the monks who walked and chanted their prayers were my feet on the tiny road of Rewalsar. I reached the Gurudwara , where I intended to enquire about lodgings . And luckily found a room they were able to spare for 100 bucks. Having never been a big tea drinker, the winters in hills would change that. A tall glass of tea offered in the Langar Hall warmed by cold senses.

After freshening up as I made my way to courtyard of the Gurudwara, I noticed the very famous and formidable statue of Padmasambhava looking peacefully over the landscape. How does one define calls that have no words or language, such was the allure with which I was drawn to the Temple of Padmasambhava now shining with a Sun unhindered by clouds or pollution of Delhi skies.

A small walk unmeasured by time and you are at the footsteps of the temple. I walked into the main shrine , whose doors were left open and the only restriction was of having your footwear left outside . The meditative silence of the place was prayer in itself which I could only further strengthen by keeping my quiet.

After the temple, a little walk further takes one to the simple Temple of Rishi Lopas. And walking along the street more monasteries can be explored.

My next destination was the Naina Devi Temple which is built at the height of 1850m and can be accessed through a bus. (Fare :15 Rupees) The bus ride would take 20 mins and gave me the first glimpse of how expertly the drivers make their way through the shit in your pants , edgy roads of the Himalayas.

The view from the Naina Devi temple is awe inspiring, when one sees the Pir Panjal mountain range spread on the horizon.

To my pleasant surprise I got to know that the temple offered Bhandara ( food ) until 2 PM daily and I too partook along with a hoard of school children who had come for a picnic to the place. The food was typical pahaadi food which my hungry stomach gulped down like no tomorrow.

Once done and after exploring the area further, instead of waiting for the return bus I walked my way downhill. ( I later remembered that this place can be trekked too with a pretty well defined trail )

The steps to go down until the Lake Kunt Bhyog, the biggest lake of the seven lakes of Sarkidhar and then further reaching the cave of Guru Padmasambhava.

The cold belly of the mountain, was a contrast to the sun hitting the face of the hill. The place is draped with a hoard of Prayer Flags which I had until then seen only in photos and TV. Taking a little rest there, I again continued my trek downhill with ever growing fascination for the solitude that was graced on me.

I reached back to Rewalsar in an hour's time, just also in time to get some old notes exchanged at the only Bank in town. I spent the rest of the evening watching the fishes fight for small doughs of flour and biscuits. The birds chirping their way from one tree to another like a abstract slideshow on a Winamp Music Player The moon this fortnight was going to be the Super moon. It rose slowly over the hills , dipping itself in the Rewalsar Lake simultaneously. The hoards of monkeys too went uphill to their trees to spend time convalescing.

I walked the lake shore again to the Gurudwara, spent some time within its premises more observant than participative. The dinner in the Langar to bring closure to my first day amongst the mountains.

The view of Rewalsar while hiking from Naina Devi

Steps leading to the Cave of Padmasambhava 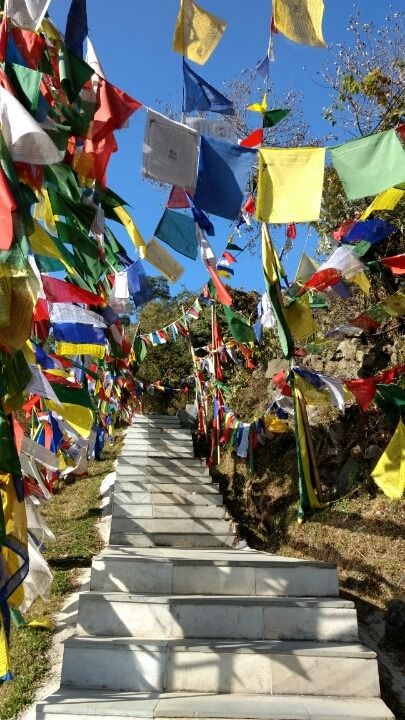 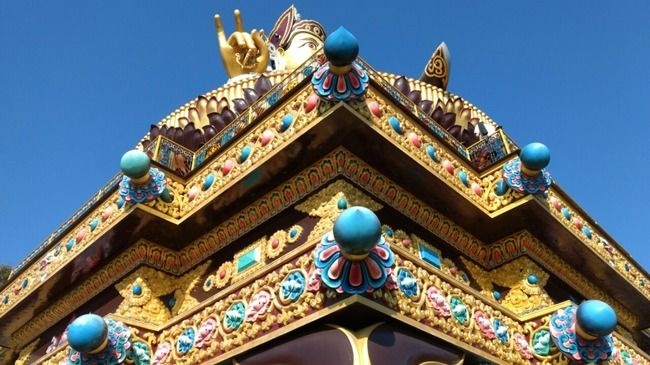 Relaxing on the way back to Rewalsar from Naina Devi 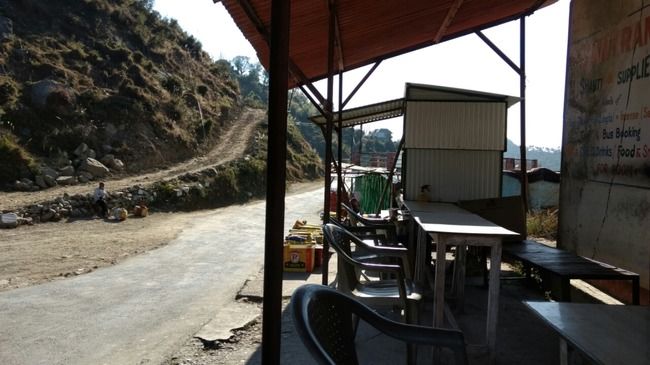 Sunrise or Sunset. Shadows are deceptive and so is memory. 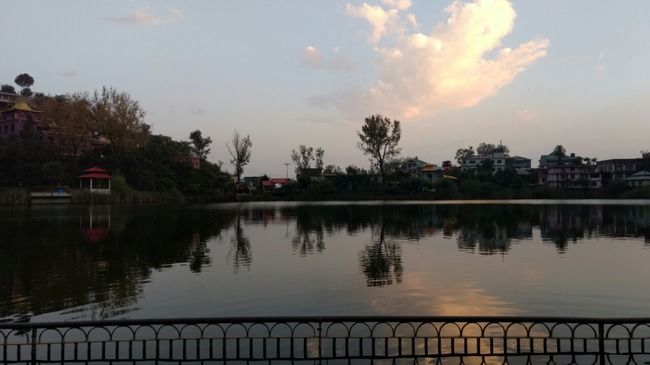 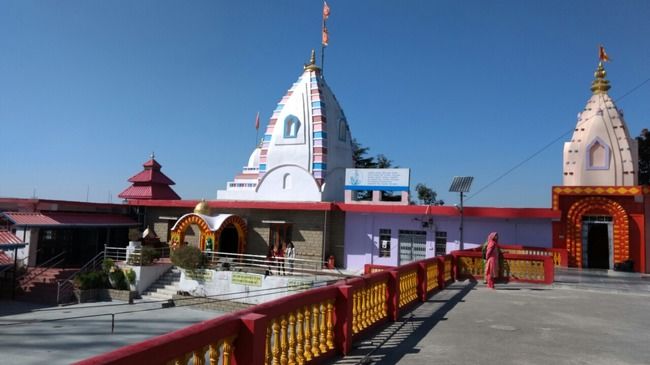 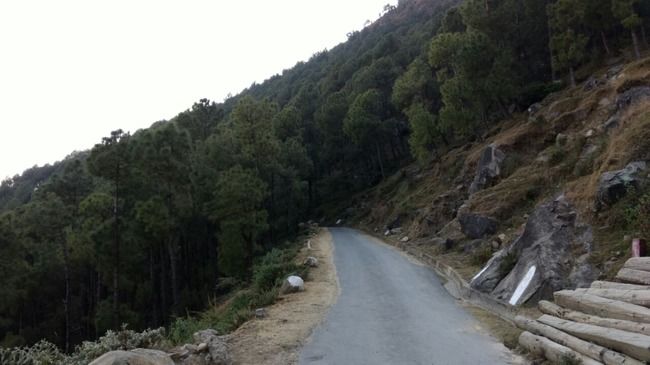 The moon is just a shy presence. 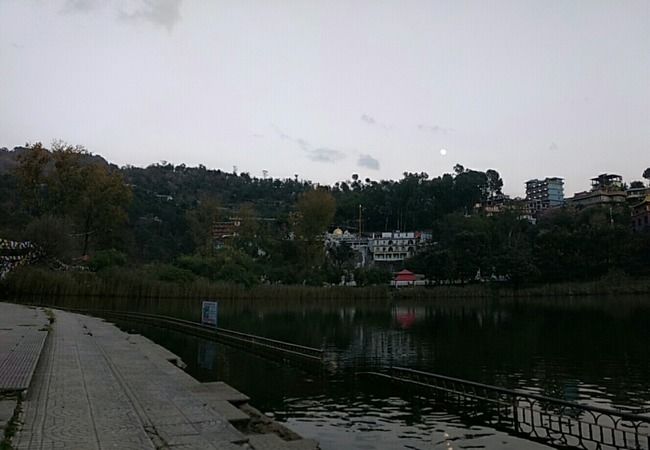 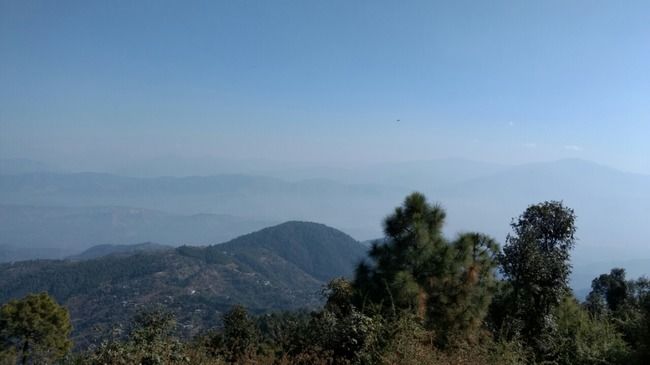 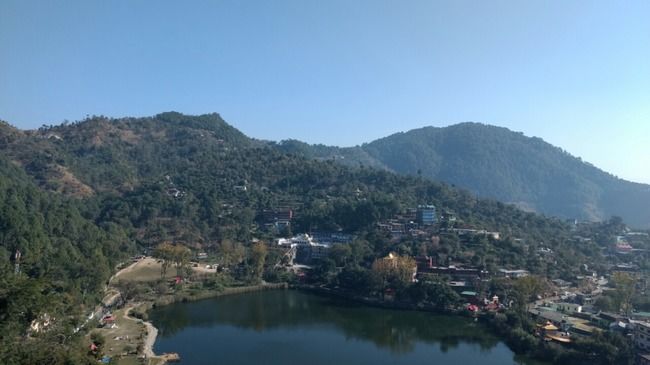