Resfeber, a Swedish word, apropos of the human feeling of anxiety mingled with anticipation that a traveller experiences before a journey.

Dusk was coming. The rickety-old bus enroute Bhuntar grumbled it's way out of the Grand Trunk road. I sat, cramped, in the right corner of the last row of seats. The bowels of the bus was drowned in a diabolical medley. A babel of voices of the cram-full interior, the blaring country music playing to keep the driver awake, and the omnipresent honking of motor cars on Indian roads.

All the while, I was consumed by my thoughts of what lay ahead for I had no plans, no itinerary for my month-long adventure away from my mundane routine-life. I put on my earphones to disengage from the chaos, within and without. Heavy-eyed, I gazed out of the window. The urban jungle running in the opposite direction. AC/DC playing in my ears.

My friends are gonna be there too,

Except my friends are not going to be there, after countless days of toiling with the fiendishly busy life in Mumbai, I had escaped, unchaperoned.

My destination: Hills in the North; My expedition: To discover Shangri-La.

Vacilando, according to the Spanish, is to travel with the knowledge that journey is more important than the destination.

Light burst into the cabin as I dragged the twin-doors open to the clearing that lay before the cottage overlooking a magnificent canopy of green, blanketing the alpine surroundings. I stood there basking in the sun and taking in the crisp air of the Himalayas. Grinning, distrait, and absolutely absorbed in the moment.

It had been four weeks since I had set foot in the Parvati Valley. It took a gruelling 15-hour ride in the back of the bus, soaking up the G-forces of swerving hilly roads and viaducts, and an additional 2-hour hitchhike in the back of a pickup truck, I stood in Kasol.

To add to my chagrin, the beautiful town on the banks of Parvati river in the lush green valley, held a different picture as the one I remembered from 5 years ago on a hiking trip with my college cronies. The charming town was horded by legions of meandering tourists with no room for a lonesome wanderer.

Bemused by the fact that time changes everything and in an act of spurning to stay true to my backpacking escapade, I started for Tosh,a village settled higher up in the valley, on foot. The road snaked through the valley, over the river which made for a leisurely walk. A long lines of vehicles stood at a stand-still because of a bottleneck, and the air smelled rank of the fuel smoke. I was faster on foot and the wind was on my back.

Midway through I arrived at Manikaran, a pilgrimage for Sikhs and Hindus. I climbed down the valley to soak my jaded feet in the hot water springs. And although I am agnostic, I uttered a silent prayer for God to deliver me to the Shangri-la. So I picked myself up with renewed gusto, energised by the by the mystic waters, resumed my search. Truly happy to be on the road.

The word coined by the Japanese to explain the profound awareness of universe that triggers a deep emotional response.

To my bemusement, Tosh was no different than Kasol. Except for cooler environs and a village landscape it seemed like I was crashing a jamboree, behindhand, and unbidden while at it.

It was at the onset of night when I began to look for an abode for the night, mumbling to myself, frowning at the exponential growth of population. Swallowing my contempt for my own kind, I humbly enquired about low-priced accommodations in the village to a tipsy looking girl. After what it seemed like a look of scrutiny to deem whether I was worthy of the information she gestured me to the far end of the village.

I found a cosy chamber in a stony house of an elderly village couple who were letting out rooms to tourists as every guest-house and lodge in the village was full to bursting.

Later in the night, after a hearty home cooked meal of hot rice and lentils, I sat in a huddle with other guests at the inn around a bonfire, my eyes fixed upon the the dancing flames taking myriad shapes.

Soon all were engaged in a conversation over steaming spiced tea. It was an eclectic mix of folk. An Israeli journalist talking about warring countries, a British student discussing movies, a French tattoo-artist explaining art, her Spanish boyfriend speaking of music and how it calls to and connects all souls. And I listened, questioned, and laughed with them. Furthermore, I shared my quest with them which they found intriguing.

The Spaniard started playing a guitar, and the captivating melody took over us as we sat around the mound of crimson coals.

Before retiring to our beds, we had made a pact to hike up higher and deeper into the mountain forest to an even small village named Kutla. I looked up at the sky and let out a sigh, gesturing to the band of wanderers at the countless mass of stars watching over us. And we sat engrossed fixated by the artwork of the heavens above.

We began at dawn as suggested by the elderly couple who had hiked to Kutla together umpteen times for the pleasure of each other's company.

And for a fact, they were not native mountain folk, but a couple from Delhi who had eloped together to spend their lives together, against their parents wishes, in peace. Moved by their story, we bundled up our rucksacks and strode through the grassy path towards the promised land.

The trail itself was beautiful, lined with cedar trees engulfed in the vast mountain valley, the bustling sound of the stream and chirping of birds invited us further in, with the smell of the fresh air mixed with scent of pine needles enchanting us.

The sun climbed up the horizon, as we trudged on ever-so-precipitous trail. For the first few hours everyone slogged in a single file resembling a convoy. As if the travail of the trail reminded everyone of their hassles, some spoke about the unequitable cost of living in the city, the arduous jaunt of grasping success to make a living, the nugatory intimidation of different societies with its cultures and norms.

When the sun was at it highest, it got sultry, and we were running out of water at an alarming rate. Every step was a severe struggle. Half of the company were in half-minds of going back. Every now and then a discourse would break out to decide the wise plan of action. I would lean on a tree, under its shadow to catch my breath. My muscles locking up due to strain and dehydration. To conserve water we took mere swigs and breathe through it to keep our windpipes and air-cavities moist. Nevertheless, we toiled on. It seemed that this trek was not meant for us, but only for seasoned and hardened hikers.

If it could get any worse, a group of villagers returning from a foraging trek for their cattle informed us that we had taken the wrong trail. It did go all the way to Kutla, our destination, just not through the valley, but around it. The only way was forward, through thicker foliage as the forest got dense, likelihood of encountering wildlife, and hazard of crossing landslides. In a nutshell, we were doomed.

Since we were more than halfway through and had no water left now, our only bet was to move forward. The trail was steeper laid with rocks and covered with overgrowth. The forest seemed uninviting, and I comprehended that human can never conquer nature. Sporadically, someone would lose their balance, or sit down in exhaustion, yet we laboured on. No one spoke for what it seemed an eternity. Until the Spaniard, who was leading our convoy at that time yelled, 'Vamos!'

I looked up the trail at him and saw that it flattened out from where he stood. We had made it. And we all yelled, 'Vamos!'

It was almost sundown, we had settled down on the crown of the valley ridge watching the sun melt down in the horizon, painting the whole sky amber. Everyone exchanged glances, worn-out, though proud.

Spanish for a place from which one's strength is drawn, where one feels at home and you're your most authentic self.

According to the national census of 2011, the village of Kulta has a population of 4. It has no cellular reception, no motorway, and only clean hydroelectric energy.

I step out my log-cabin, still grinning as I join my friends for breakfast. It is our last day together. I greet them and sit down sipping on the soothing local concoction of ginger-lemon-honey-tea. It had been over four weeks since our crusade landed us in this paradise.

The panorama is inexplicable. It is the epitome of beauty. The snow-capped hills stand fiercely cocooning the valley, a veil of haze descends down from them. The sunlight filters through the clouds that you walk through and the leaves of trees still growing since the olden days.

All of us had taken odd-jobs to help the villagers here, as living here costs a paltry amount of money compared to any tourist place. Everyone rotated between chopping firewood, cooking food, cleaning the rooms and other household chores. All this time nestled in the nature we had become more fit and robust. We had hiked to a number of clifftops. Our luxuries included camping under the starlight, both preparing and gorging on feasts, partially learning to farm and to shepherd. All the niceties and qualm of urban lifestyles were forgotten. We were enraptured in the present rather than clawing at future with the struggles of our past. I felt as if I was meant to be there. I think to myself, disoriented by the idea, that why should humans ever leave the forest.

Dusk has settled. I am back in the bus, going back to my routine-life. I stay awake; dejected to be going back. I try to soak in every bit of the hills through the window. Unlike the previous bus ride to the valley, I am seated in the front. Also, everyone is silent, dormant, or in slumber this time. It starts to rain, and I can't catch the reflection of moon on the river flowing down on the valley floor. I turn my gaze to the road. Realising that the road has become my home. And I am born again, to wander.

Between the Heaven and the Hell,
A vast Expanse devoid of Borders,
And of no Religions and Illusions,
Where the Reality is the Dream,
There's Miracle in the Streets,
And a vast radiant beach,
And so much unseen,
If you start for the farthest things,
When the Sea is mingled with the Sun,
And because the night is still young,
For you to be found again. 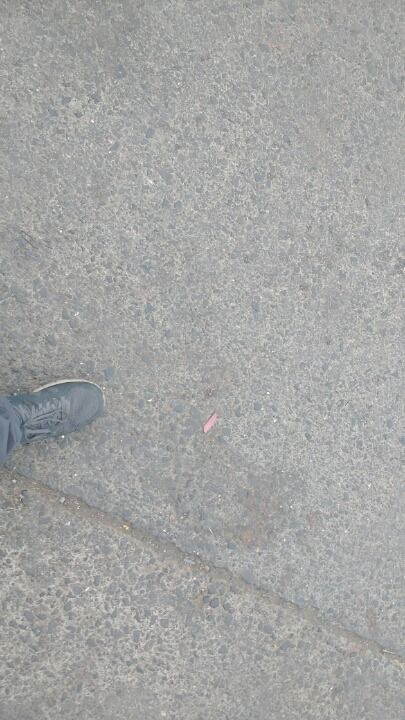 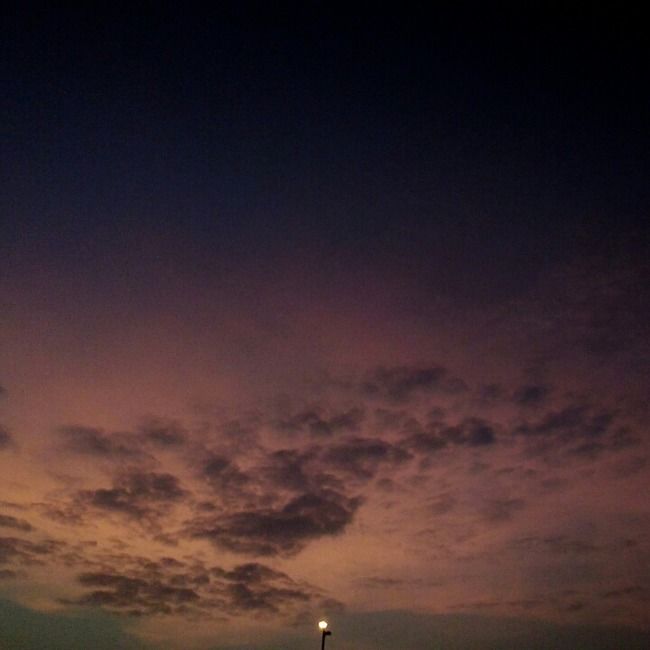 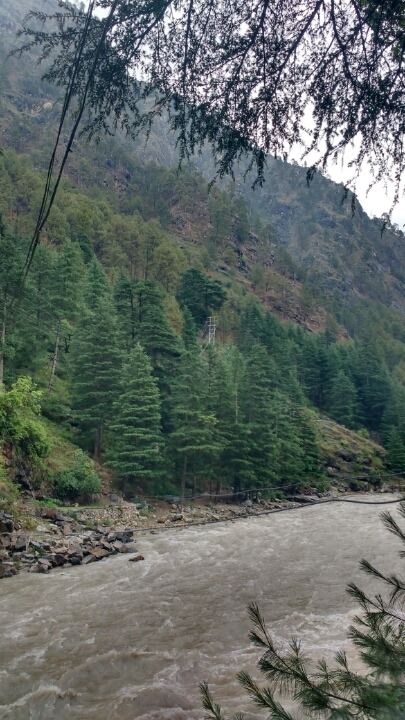 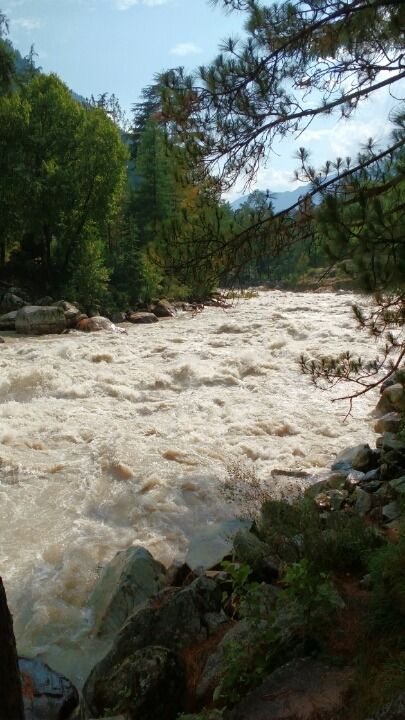 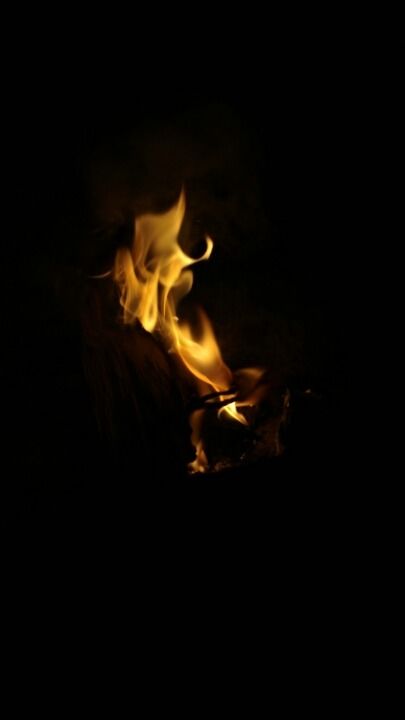 On the way to Kutla. 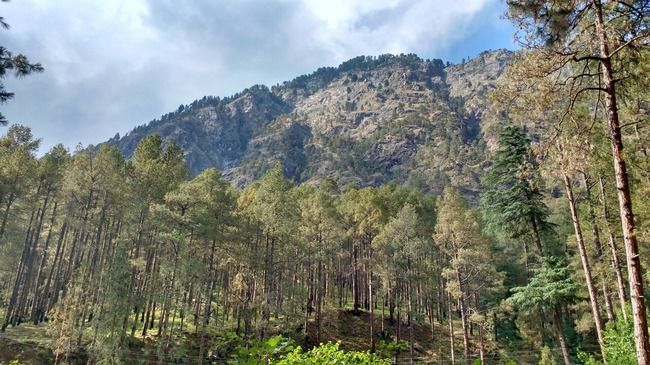 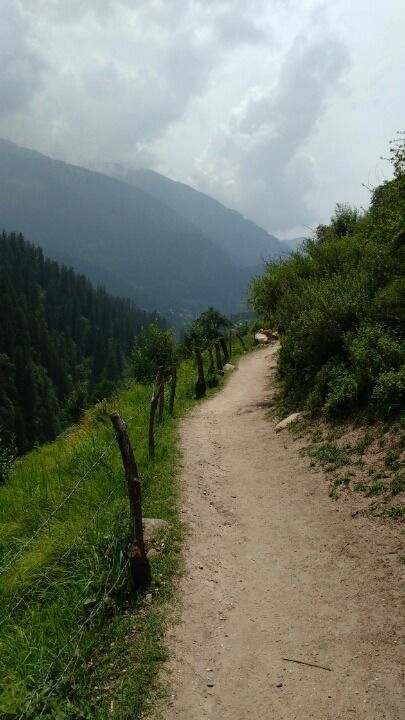 In the thick of the forest. 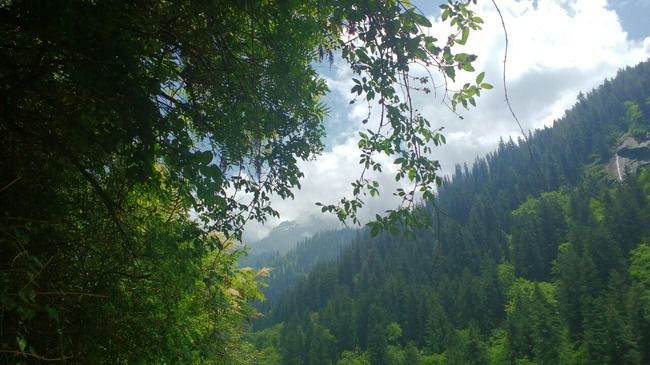 Sun climbs to the zenith. 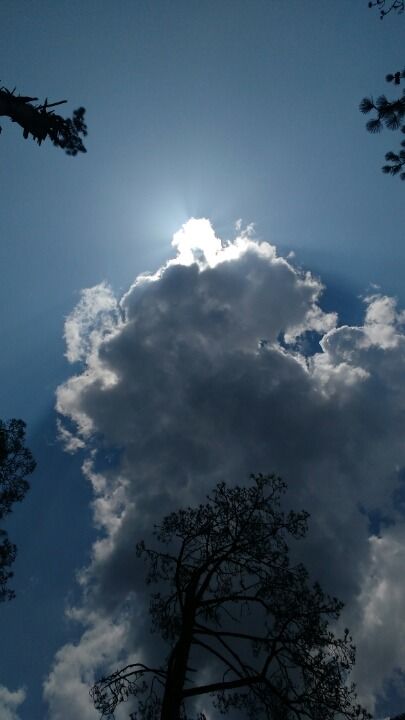 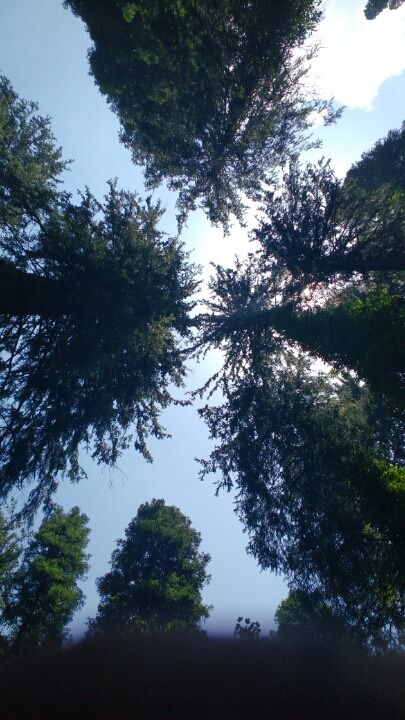 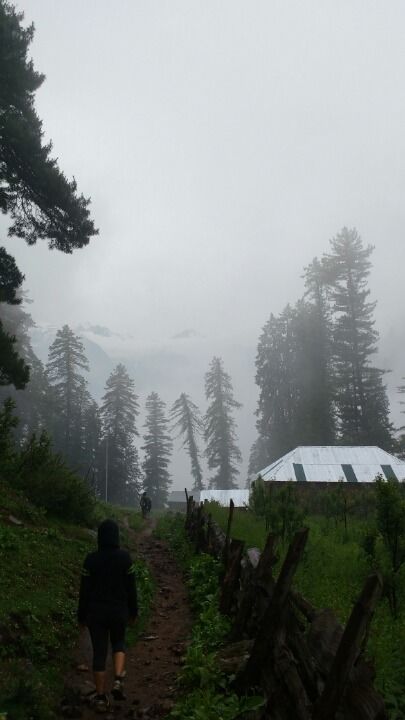 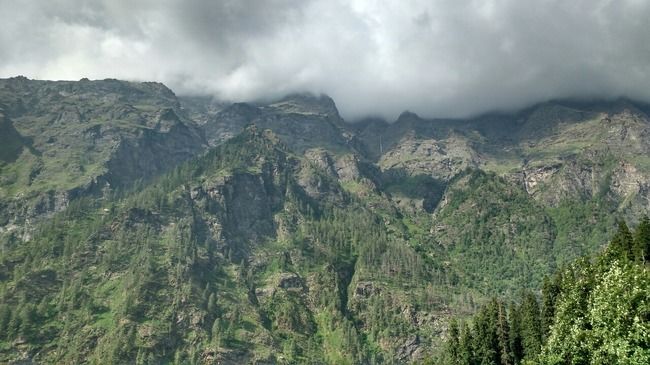 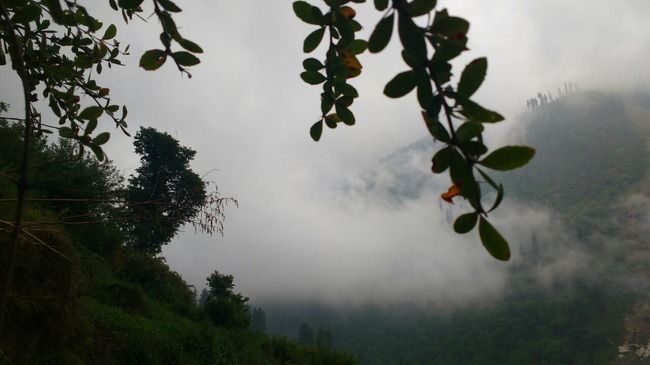 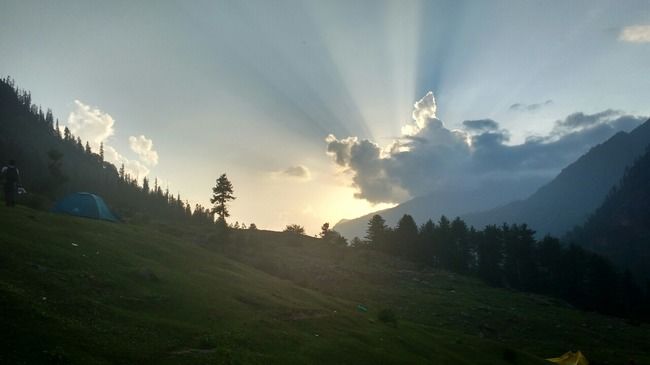 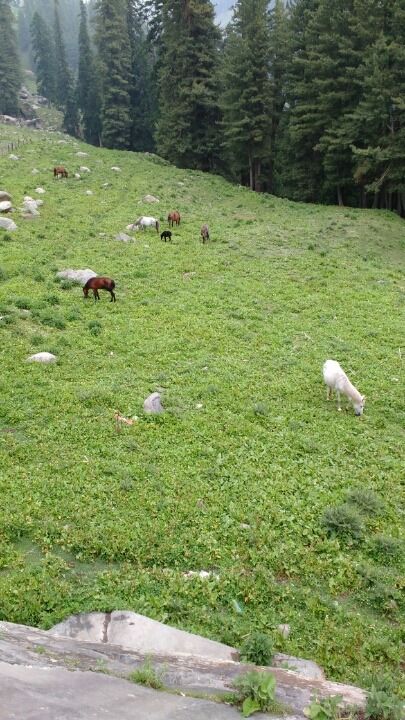 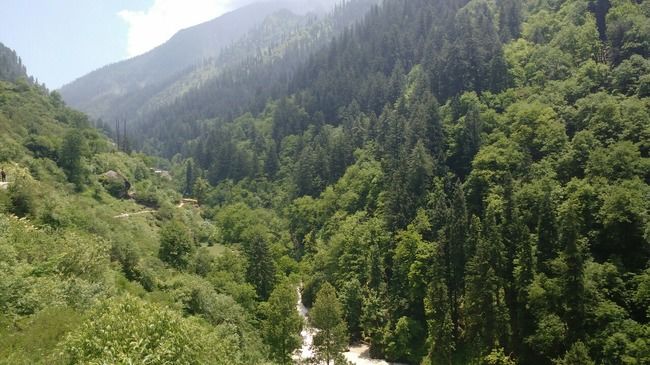 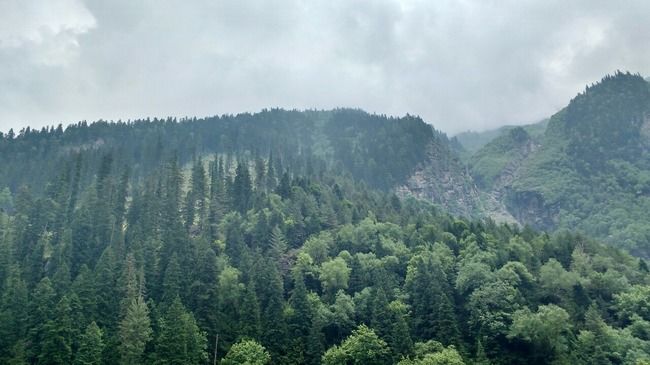 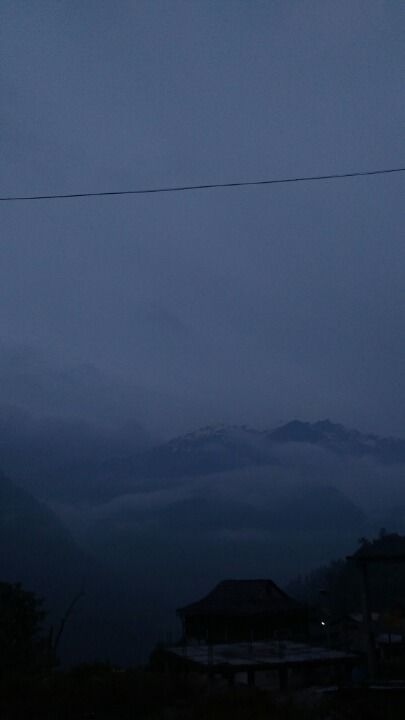 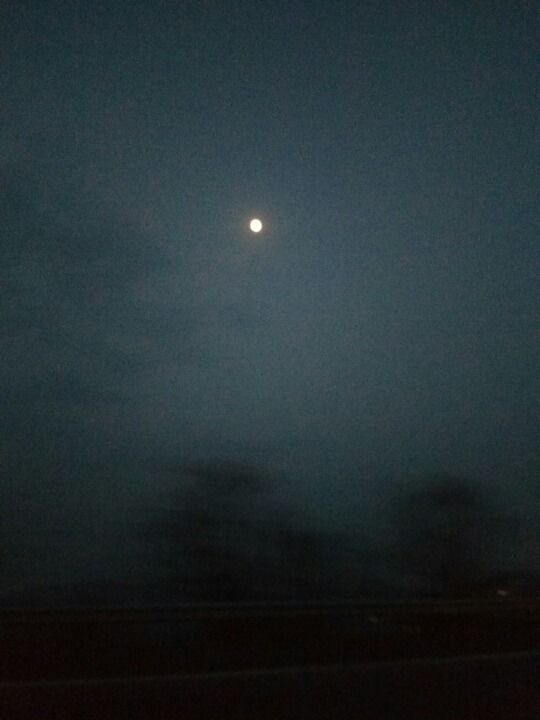 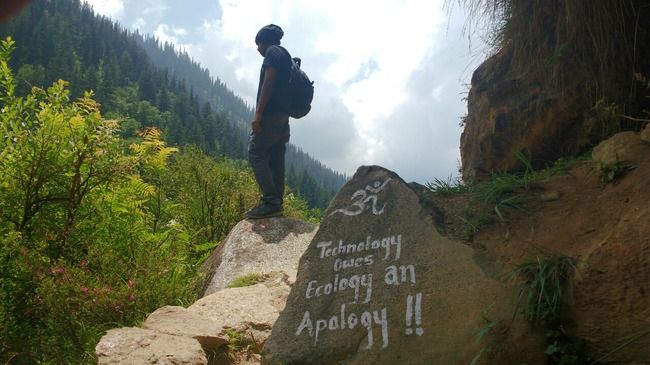